Aging seems to be a terrifying process for most of us — all kinds of diseases come along with it. 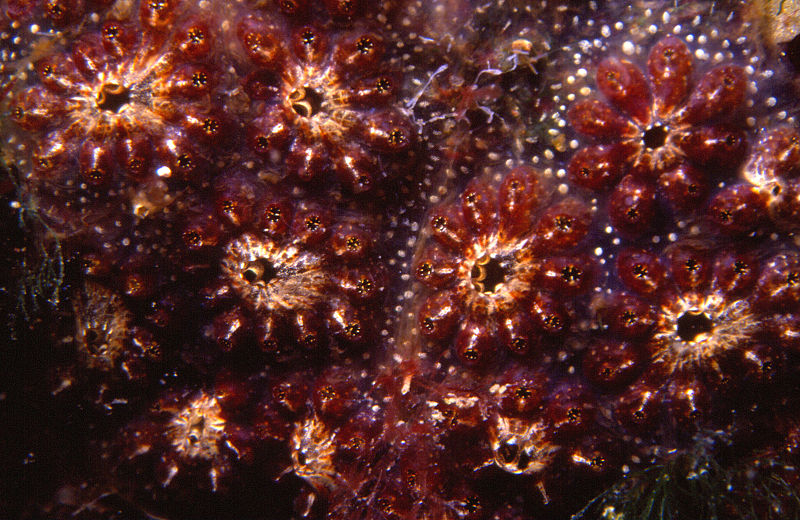 Botryllus schlosseri, or the star tunicate, has a open vascular system. Courtesy of Wikimedia Commons

Many humans are not satisfied with their healthspan, the period of life one spends in good health. Aging-associated diseases rob our vitality and constrain us from living as we were young.

“When you are 60, [you] live until 80 and then, for 20 years, [you get] progressively unhealthy. We’d love to change your healthspan.” said Anthony De Tomaso, a professor in the Molecular, Cellular, and Developmental Biology department at UC Santa Barbara, who is leading a team in studying aging in the vascular system. True to De Tomaso’s words,  most people would wish for a longer healthspan, to live like a 60-year-old in their 80s, with a comparable quality of life.

People step closer to acquiring serious diseases in the aging process. One person dies every 36 seconds from cardiovascular disease in the U.S. alone — most of whom are older than age 75. Even when it isn’t besieged by disease, the worn-out vascular system decreases in flexibility and people also have reduced mobility. For example, they may not be able to play high intensity sports. Besides vascular diseases, elders also have a higher probability of acquiring cancer.

However, De Tomaso and his team have gained results through their research that may enlighten treatments toward these diseases by studying the vascular system of a model organism in research published in Frontiers.

They were creative when choosing which organism to study vessels in. Instead of some commonly used models such as mice or worms, they worked on Botryllus schlosseri, a type of tunicate that has its vascular system growing outside of its body. The accessibility of its vascular cells enabled researchers to cut out pieces of vessels, watch how the vessels regrow or regress in real time and learn which genes are expressed at a particular stage using DNA (or mRNA) sequencing methods.

One of the questions they asked was how an old-appearing blood vessel cell is different from a young-appearing cell. The answer was, as they age, cells form narrower vessels that only allow blood to flow through slowly. When the flow speed reaches the lower threshold, aging stops and death overtakes the organism.

The following question rose immediately after: How does genetics affect the aging process?

After working closely with these model organisms, researchers confirmed that gene expression related to cytoskeleton and extracellular matrix (ECM) functions changed a lot as they age. The cytoskeleton is analogous to our skeleton, but on a much smaller scale: They are supporting the cells from within. The ECM is a 3D network that supports its surrounding cells externally. When the cytoskeleton and ECM don’t work as well due to aging, the vessel cells have a more disorganized structure and become stiffened.

Although they express different genes, old cells and young cells don’t differ in their cytoskeleton and ECM DNA sequences. Instead, this differential expression results from epigenetic changes, which are modifications in gene expression that don’t involve changes in the DNA sequences themselves, such as differences in how proteins interact with a DNA strand. For example, some proteins that normally repress the expression of a gene unique to young cells may be produced near the DNA strand in a much higher concentration than before, causing that gene to become muted, which could lead to cellular aging.

This key finding, that old and young cells differ in their epigenetic expressions, was proved by an ablation experiment, in which researchers cut a piece of the blood vessels from both the young and the old B. schlosseri and observed whether the vessels would regrow. To their surprise, both the old and the young organisms regenerated vessels, but the old ones were only able to regenerate old-looking cells, which formed narrow vessels. It seems like aging doesn’t inhibit a vessel’s regenerating ability, but it does determine what the regenerated cells look like.

Although the study results are not applicable in real life currently, they allow us to better understand how the aging process brings differences for cells at different ages, according to De Tomaso. Recognizing the difference between the desired outcome, which is the young cell, and the target, the old cell, is the first important step toward understanding how to possibly rejuvenate our old vessels.

Besides providing implications for future studies on vascular diseases, these results may also shed light on cancer treatment.

Researchers treated B. schlosseri with a type of cancer-suppressing drug called BAPN, which works to inhibit new vessel growth in tumors.  In response to BAPN, young blood vessel cells commit suicide but old cells don’t. That immediately caught researchers’ attention because the reaction of the young cells is a desired outcome when tackling a tumor.

As a tumor also needs nutrients, it tricks blood vessels to grow toward itself and serve as a food delivery pipe. If researchers can trick a tumor into behaving like B. schlosseri and cause newly formed blood vessels to retreat from the tumor in a controlled manner without damaging other tissues, they could come closer to developing cures for a variety of cancers.