The Daily Nexus
News
Isla Vista Boat Boys Clarify: “It was completely sailable”
May 13, 2021 at 6:05 pm by Atmika Iyer and Holly Rusch

On the night of May 7, three UC Santa Barbara students took a trip to the local Albertsons near Isla Vista, where they found a kiddie pool. Inspired, the three housemates purchased two kiddie pools and began brainstorming on how to turn it into a boat and take it into the ocean. 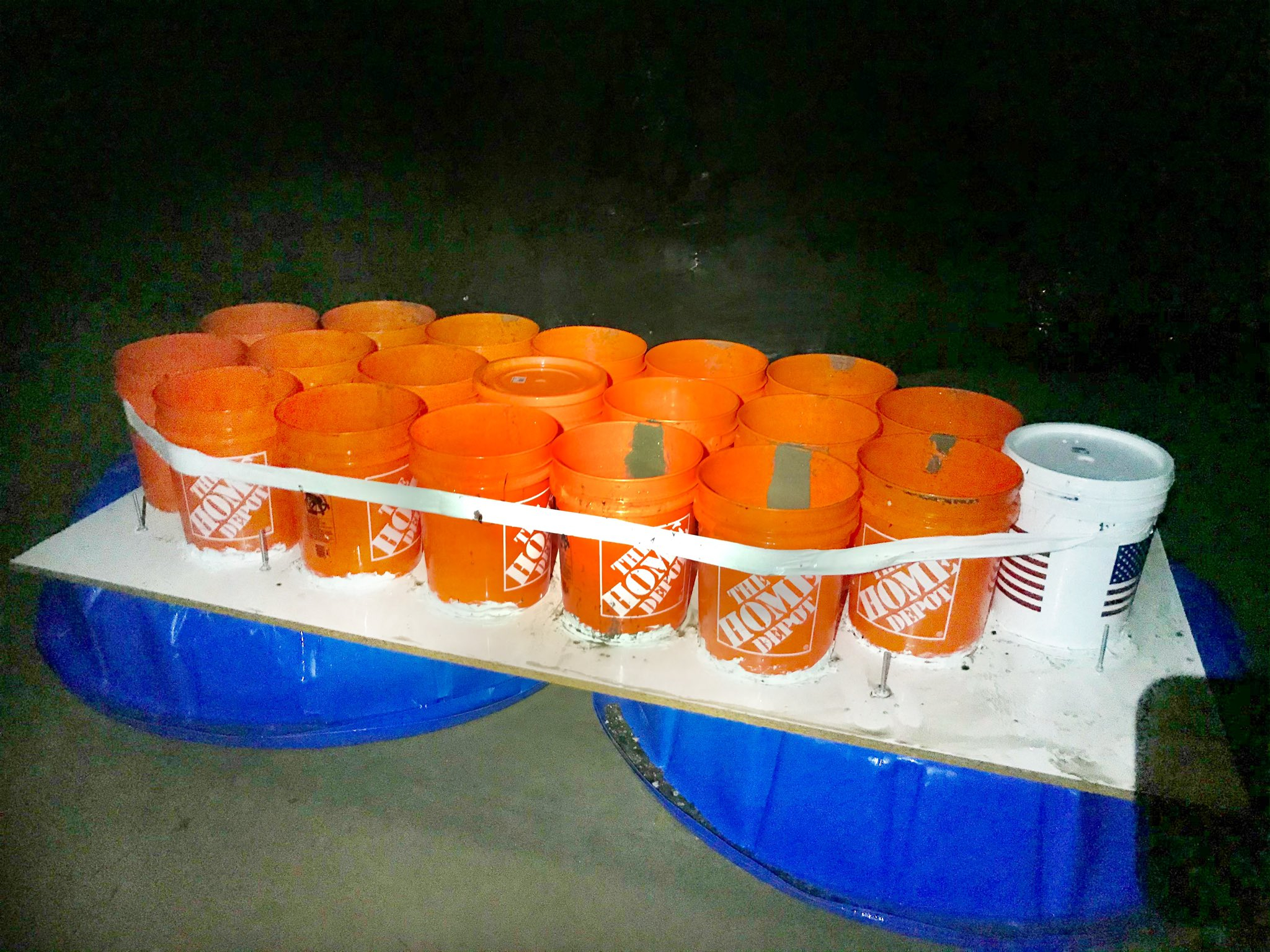 The housemates built this vessel with home depot buckets, a wooden board and Albertson’s kiddie pools. Photo courtesy of the Santa Barbara Fire Department.

Unbeknownst to them, the story of their late-night escapade and eventual rescue would soon become international news, picked up by the Los Angeles Times, the Associated Press and even a Bulgarian news outlet, an experience the boys called “weird.”

But according to a housemate who spoke to the Nexus, they didn’t actually need rescuing.

On their way to the beach that Friday night, the two were stopped by police who asked them what they were doing with their contraption, the housemates told the Nexus. The group of boys told the officer that they used their knowledge of math and physics to ensure that the boat was safe, and the officer allowed them to proceed.

After the housemates reached the beach, the boat received attention from partygoers on the bluffs above, the boys said.

“The guy who owned the house came down, [and] was talking to us … People from the party [were] continuously coming down and helping us and looking at it and talking to us,” the second-year student said.

Once in the water, the boat worked exactly as intended, the second-year continued.

“We flipped [the buckets] over like you see in the photos, the buckets are up,” he said. “Then you fill the buckets with water, which we calculated, just to keep us stable and buoyant … It was completely sailable.”

Soon after the boat took sail, with one housemate manning a paddle, someone began flashing a light at the boys. Thinking someone was looking to say hello, they flashed a light back. The boys now believe that the person who originally flashed the lights might have thought they needed help and called emergency services.

The housemates do not know the identity of the person who called emergency services.

“When we first saw [emergency services] coming up [we were] just kind of pissed off because we thought some drunk person just called even though we were perfectly fine,” one of the second-years said. “We were mad both that we were gonna have to deal with this but also that emergency services [was] wasting their time with something so stupid.”

The boys apologized for the bevy of emergency services that were brought out to aid in the rescue — including paddleboards, jet skis, boats and a fire truck — as they got to shore without assistance.

Once the boys paddled back to shore, they took a shower and returned to the beach to take care of their boat. They dragged it by the stairs on the beach and tied the boat there hoping to bring the boat back later. Unfortunately, it seems their knots were too strong, and they’ve struggled to bring it back home.

Despite the boys’ claims, Mike Eliason, the public education officer for the Santa Barbara Fire Department, said that the fire department had an obligation to bring them back to shore.

“[The boys] weren’t dressed appropriately. The seaworthiness of the vessel was in question. They can say that it was perfectly formed and will ballast and everything else,” Eliason said. “But we’re not going to allow them to stay out there at that time at night in that vessel. And we wanted to bring them ashore for safety reasons.”

“If one person had been suffering from hypothermia, or if they had gone overboard, then it would have taken an entirely different tone. So that’s why we reacted the way we reacted,” Eliason said.

As a result of the coverage — both by news outlets and on Reddit — the boys received an unexpected amount of media attention, something they attributed to the tweet from Eliason that originally reported them as “rescued.”

“Without that mistake, it’s just a non-story. It doesn’t have to have been written, probably,” the first-year student said.

However, because of the news coverage, one mariner offered to take the boys out on his sailboat — an offer the boys told the Nexus they plan to take up.

Sounds like the logic of all first year students. Complete idiots.