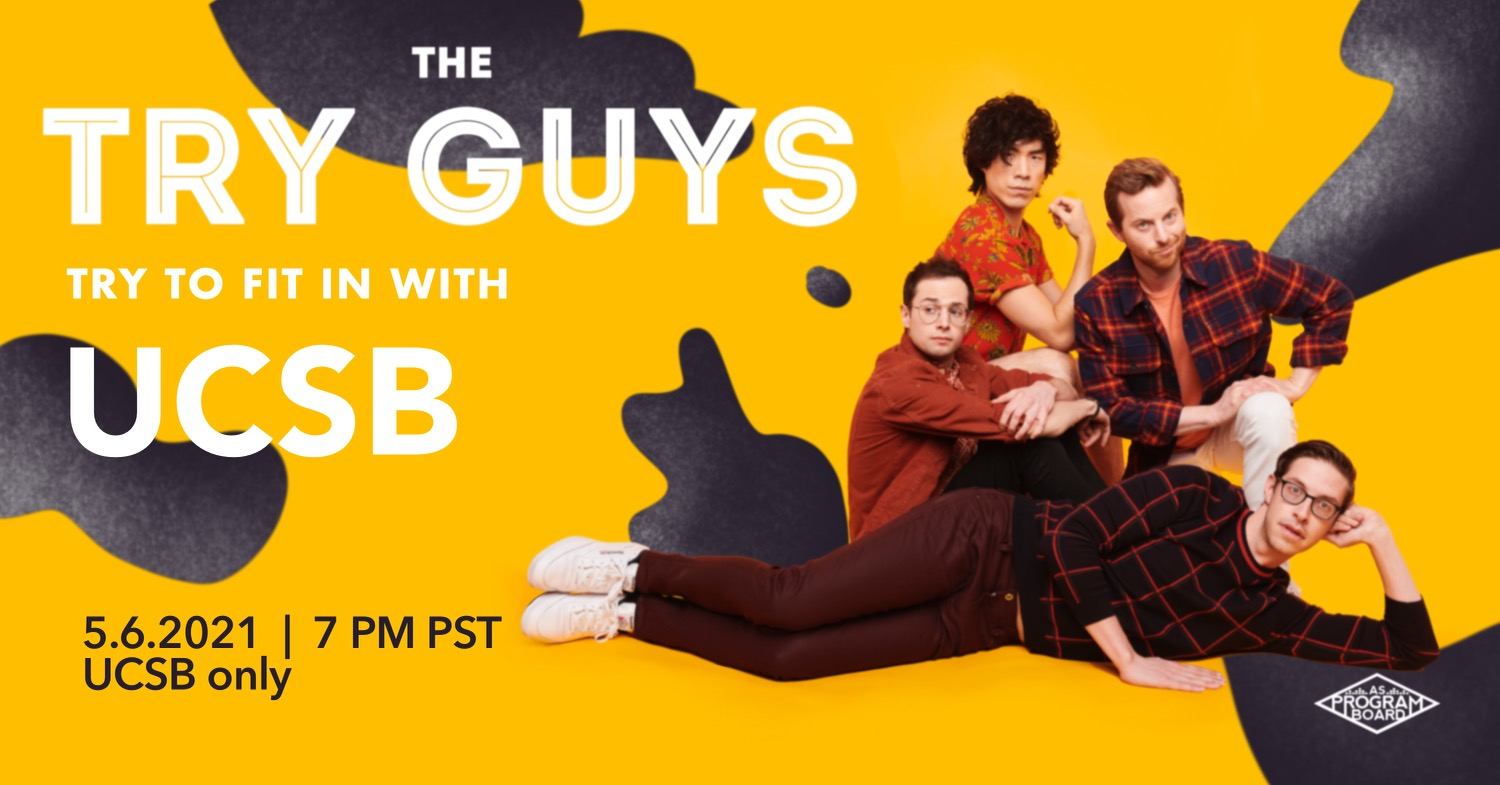 There seemed to be a certain feeling of emptiness and exhaustion in the air as UC Santa Barbara students wrapped up the last of their midterms, but fortunately, the Try Guys, a revered and beloved comedy group of four guys trying just about anything under the sun, came and delivered a night of laughter and memes to provide students with a much needed break from hours of studying. The event, hosted by the Associated Students (A.S.) Program Board on Thursday, May 6, covered a range of pressing matters including whether or not the group would marry Danny DeVito and a PSA from Miles Bonsignore.

As the webinar introduced a new screen, viewers heard a variation of scatting as the camera slowly introduced Keith Habersberger, Eugene Lee Yang, Ned Fulmer and Zach Kornfeld sitting in their illuminated purple studio. Giving all of their energy into this performance, they greeted audience members with open arms and warm welcomes. The night started with a game of “How Many Things Can Fit in Keith’s Mouth?” To recap, if you ever wanted to know how many Chicken McNuggets can fit into Keith’s mouth, the answer is 12.

The next segment consisted of showing various pictures to Zach and Keith and having them guess what the image is, but with a catch: They can’t have their glasses on. The first image revealed was Doge and after some guessing, Zach won the round. The second image was of Rick Astley, in which various guesses were thrown around such as trash can, ocean and compost bin. “It’s going to be really rewarding when you find out,” Ned said. After pushing the image closer in increments, Keith finally guessed right, ending the world’s longest rickroll. The tie did not last long after Keith, upon closer look, guessed a promotional image of “Twilight: New Moon” after saying that it looked like “two orange orbs and one pale thing.”

For the last game, the Try Guys played a riveting segment of “Fuck, Marry, Kill” with names taken from audience suggestions. The most notable outcomes would be Eugene choosing to kill Danny DeVito because “he has had a good life.” In the second round, Pitbull was a highly requested choice in the chat. Consequently, Zach questioned the public’s obsession with Mr. Worldwide, but regardless, he was a high contender for marriage.

In the second half of the show, students who sent questions beforehand were invited to connect their cameras and ask them live. Julia Storey, a second-year student, asked the first question for Eugene about his experience as a guest star on the show “Brooklyn Nine-Nine.”

He said, “I will say, Andy Samberg is very very nice and very attractive in person. It certainly was very funny to improvise with them for a good 10 takes because [Samberg] kept saying ‘daddy’ in that shot.”

Lily Vo, another second-year student, asked Eugene to speak on his experience breaking into the entertainment industry as a queer Asian person. “It was very tough. I would say I’m still breaking into it.” He went on to talk about how he had to support himself throughout college and how he is just now getting the opportunities to pitch ideas.

“Once I began to own my identity as a queer person, as an Asian American person, that’s when I got to the position when I can tell them this is what I want to produce,” Eugene said.

The last round of questions centered around UCSB-specific traditions. The Try Guys were asked who is most likely to be able to study buzzed in relation to the joke that the school’s acronym stands for “You Can Study Buzzed.” The collective answer was Ned. They also discussed what kind of parties they would throw if they attended the school. Keith said that he would throw a dinosaur-themed party while Eugene reminisced on his days as a USC student when he hosted an astrology-themed party and gave tarot readings in the corner.

Food was another heavily discussed topic towards the end of the event, and the Try Guys made sure to tease the idea of trying the famous buffalo chicken cheese fries. (Side note: Zach officially declared that Freebirds is better than Chipotle.)

As the night wrapped up, a promised piece of advice from The Try Guys’ cameraman Miles Bonsignore was not left forgotten. This statement effectively closed an eventful evening of silly games and introspective interviews.