The Daily Nexus
Society & Psychology
Tracing the Spread of Early Humans Across East Asia
March 12, 2021 at 11:55 pm by Devanshi Tomar

The origin and migration patterns of East Asians in the modern day has been largely unknown due to the limits of technology in the field of environmental anthropology. According to Douglas Kennett, a professor of anthropology at UC Santa Barbara, this was due to a lack of sufficient ancient and present-day DNA sampling. 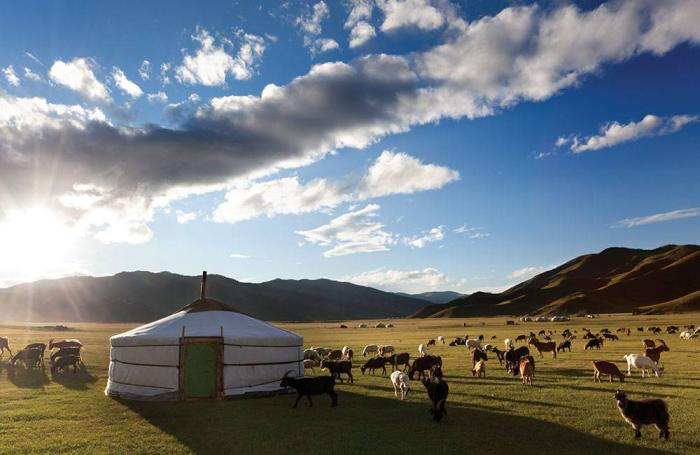 A pastoral landscape in Mongolia, which was part of the interior route of migration for anatomically modern humans. Courtesy of the Feed Project

That was, until recent developments in DNA collecting in the past five years allowed researchers to generate genome-wide ancestry data for present-day and ancient individuals.

“The last five years have been a game changer for our collective understanding of the Earth’s population history,” Kennett said.

Along with new radiocarbon methods developed by his own team, the new knowledge supplied by better technology allowed Kennett and his research group to determine the timing of ancestry change and population movements.

In collaboration for over four years with dozens of researchers, notably David Reich, a professor of genetics at Harvard Medical School, Kennett has been working on an ancient genome project focused on the spread of anatomically modern humans and their expansion in the last 10,000 years.

This expansion, Kennett said, is associated with the domestication of plants and animals and the emergence of agriculture in multiple core regions of the world. As an archaeologist with a specific interest in learning the implications of how people have interacted with and changed the environment over time, this project was of particular interest.

“Understanding the Earth’s human population history is an essential part of this and the paper contributes to our understanding of East Asia, including China, Mongolia, Japan and Taiwan,” Kennett said.

Despite the range of techniques that Kennett’s team developed to maximize their ability to detect and extract ancient DNA, working with those samples remained tricky, as DNA is often poorly preserved, and organic materials that are directly radiocarbon dated are often highly degraded. While the technology has progressed enough to render a higher volume of DNA viable for analysis, Kennett said that the team had many failed attempts to generate the data presented in the study.

Yet, data that was collected showed that the earliest anatomically modern humans arrived in East Asia within the last 50,000 years, moving along a coastal route from Southeast Asia and through China and Japan. A separate interior route of migration was detected through Mongolia.

“We also documented the expansion of three farming populations in East Asia in the last 10,000 years that are strongly tied to the distribution of modern language groups today,” Kennett said.

The Earth’s population history is highly complex, Kennett said, and it also informs the environmental impacts that anatomically modern humans have had in the last 150,000 years as they migrated across the globe.

“It shows a recurring pattern of rapidly increasing populations from centers of domestication and agriculture followed by the expansion of farmers with new technologies into adjacent regions,” Kennett said.

“These are processes still occurring today and our work is highly relevant given the environmental and societal challenges we face as the Earth’s population approaches 8 billion.”