UC Santa Barbara Reads 2021, the University Library, the Department of Art and the College of Creative Studies presented the talk “Art & Activism: A Talk with Book Artist and Printmaker Tia Blassingame” on Tuesday, Feb. 2. 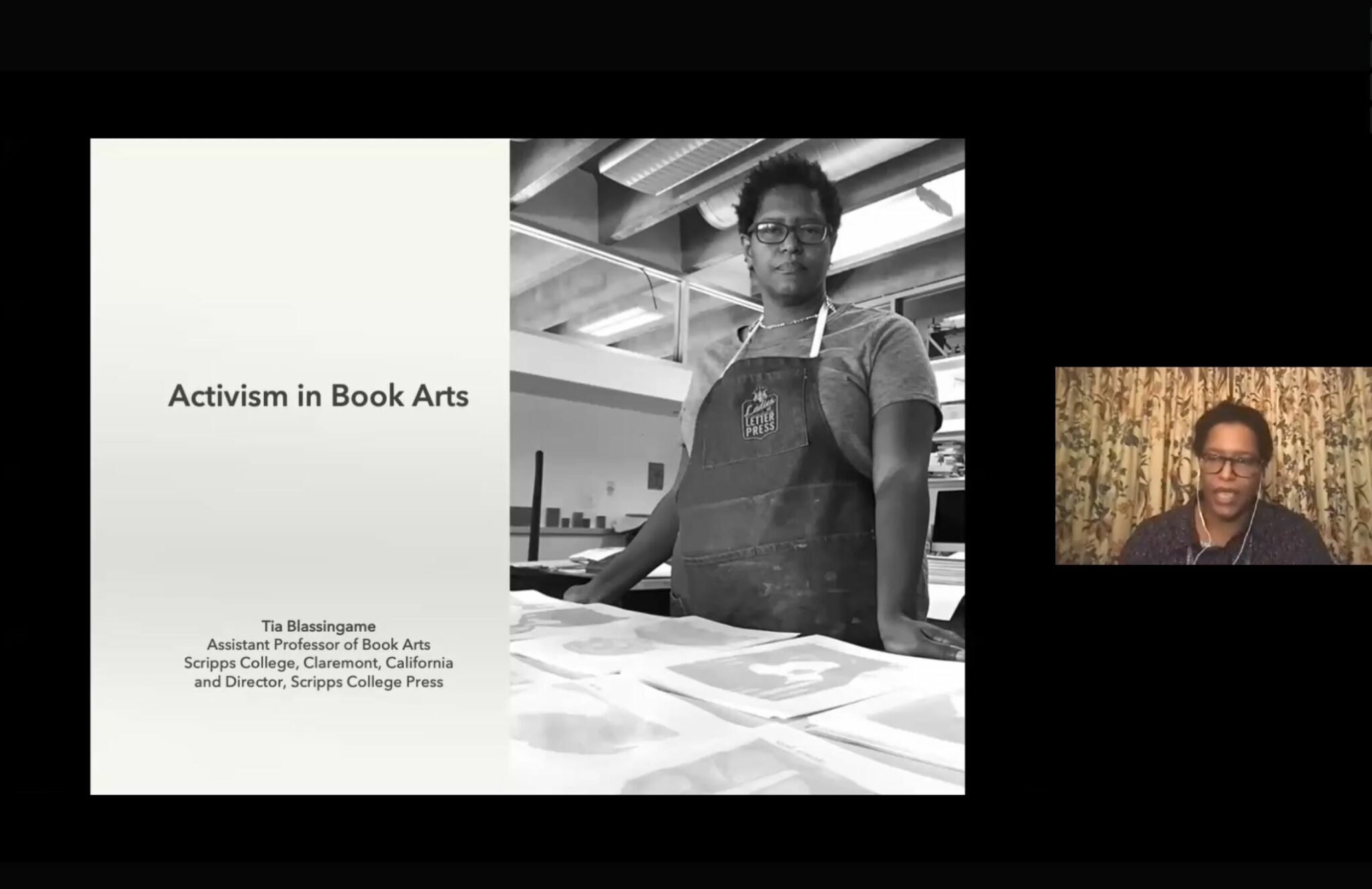 The event consisted of a presentation by Blassingame, followed by a Q&A session. Courtesy of the University Library

The event consisted of a presentation by Blassingame, followed by a Q&A session moderated by Iman Djouini, an assistant teaching professor from the College of Creative Studies and the Department of Art. Blassingame, who explores the intersection of race, history and perception in her work, provided insight into her efforts to evoke the conversations of race and racism woven into American history through printmaking and book art.

Race and history were “things that I have always been interested in, and with my dad being a historian of African American history, it has always been part of my family’s reality,” Blassingame said. “I wrote about history for a while, but I was not necessarily interested in writing, so when I came across the book arts, I found what I have been looking for.”

Blassingame was first exposed to book art during an artist residency in Minnesota and became interested in letterpress artwork, where the artist leaves an impression on paper through an inked surface, moveable type and/or blocks. There, she spent time learning the art of letterpress printing, which inspired her to move into the book arts.

“I remember the artist opening the door and spending the rest of the day showing us how to letterpress print,” Blassingame said. “That was just such a perfect day, and years later, I wanted to move into something that was going to make me happy.”

Now, with a Master of Arts degree from Corcoran School of the Arts and Design and a Master of Fine Arts degree in printmaking from Rhode Island School of Design, she has produced an expansive variety of works, some of which she presented at Tuesday’s hour-long Zoom webinar.

Blassingame began her presentation with student work from an online summer class she taught at Scripps College. The first piece was by Eliza Kornfeld and titled, “A Healthcare Dictionary: The Experiences of Women and People of Color,” which uses dictionary terms related to healthcare to create juxtaposition from the perspective of women and those of ethnic or racial minorities.

The second work she displayed was by Kesi Jackson and titled “How We Get Free: honouring Combahee River Collective and Black lesbians that inspire my activism,” which consisted of protest chants from Black Lives Matter protests in Tallahassee accompanied by silhouette-like images of protestors.

“All of the students were across the country and around the world, working on kitchen tables or in their bedrooms while using materials that they had,” Blassingame said during the webinar.

Blassingame also discussed the Book/Print Artist/Scholar of Color collective that she founded in 2019, which brings together over 35 book history and print culture scholars with Black, Indigenous and People of Color (BIPOC) book artists, papermakers, curators, letterpress printers and printmakers to converse.

“We are connected around our understanding of the book arts as a vehicle for social change, activism and racial understanding,” Blassingame said during the webinar.

Blassingame then discussed some of her own projects, including the 2001 “Anniversary,” which tells the story of the photographed lynching of Laura and Lawrence Nelson in Oklahoma. The work was created with the printmaking technique of letterpress text etching: With only a few words on each spread, accompanied by a black-and-white image, Blassingame controls the pacing of the reader throughout the book.

“There are no ropes shown in this piece because that is not the point of this work,” Blassingame said during the webinar. “My initial experience with the original photograph was not revulsion because I was looking at the various aspects of this image, like the light playing on the water and trees and the female figure almost seeming like she was dancing on the water. I wanted to give you another way to think and look at this horrible, murderous image.”

Blassingame’s next two books, a 2018 set of works, are entitled “I AM” and “YOU ARE” and were both created using pressure prints and letter print text. According to the Primrose Press, Blassingame’s official website, “I AM” was created to represent the suspension of an individual’s life and the potential the said person has to grow.“YOU ARE” was created to explore Black womanhood through text often used to describe white womanhood.

Blassingame, who “focused on placing myself as a stand-in for African American victims of police brutality, violence and humiliation,” used self-portrait photography as the theme for the set of works.

“‘YOU ARE’ follows the same rules I laid out for ‘I AM,’ and I still used self-portraits, but they are slightly warped,” Blassingame said during the webinar. “Here, I am exploring Black women through the standard descriptors of white womanhood.”

The final work Blassingame presented, entitled “Students,” is a two-sided, folded brochure and references a 19th-century verse from free and enslaved African American students of an integrated school called the Noyes Academy, with the front of the work displaying Blassingame’s research on the students.

Blassingame said she focused on this work to be informative, and the red and blue color scheme of the piece is connected to not only the colors of the American flag but also the feelings of struggle and pain. The proceeds were donated to the Innocence Project New Orleans, a non-profit law office that frees and supports innocent prisoners as part of the Innocence Network.

“The form of this piece was inspired by the brochures that are available through the national park service and other historical sites around the country,” Blassingame said during the webinar. “It is meant to guide you and connect the dots between the past and present.”

The talk ended with a Q&A session, where Djouini asked questions from the audience and from herself about the artworks Blassingame presented, her career as a book artist and advice she would give to young artists looking to have a start on their careers.

Blassingame hopes that from this event, students can feel inspired to pursue their own interests and passions in the art field.

“I hope that students can see the opportunities that are inherent in the pandemic,” Blassingame said. “I do not think you should be shy about reaching out to authors and even faculty at other campuses.”