The Daily Nexus
Features & Essays
“Waiting on Host”: UCSB Filmmakers on Shooting During the Pandemic
February 27, 2021 at 10:27 am by Sunidhi Sridhar 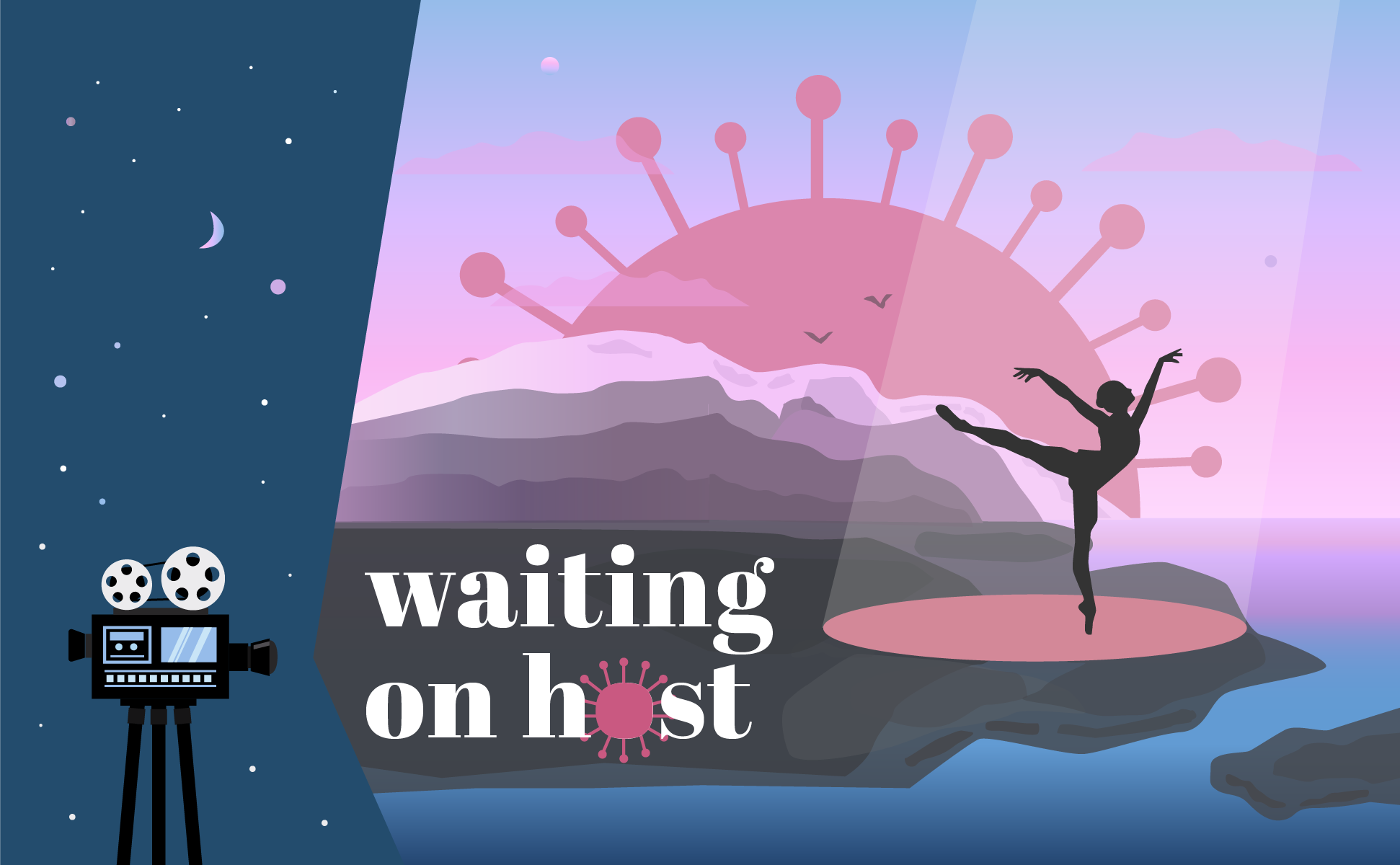 Storytelling has long been the core of the human experience, and during this implacable global pandemic, the value of forming social connections has never been more underscored. “Waiting On Host,” a COVID-19-inspired student film from UC Santa Barbara’s crew production class, is one example of how storytelling has adapted to these lonesome and troubling times.

The film, set during the pandemic, is about Jennifer, a professional dancer who lands an audition for a coveted role only to find out that her grandmother has tested positive for COVID-19. Forced to choose between her loved ones and the future she’s worked so hard for, Jennifer embarks on an emotional journey during a difficult time for her and her family.

“Obviously, the story is very personal,” Jon Peter Lewis, a third-year film and media studies major and the director and screenwriter of the film, said. “I think a lot of experiences that we’re having, even though they’re slightly different because of our different circumstances, are generally the same. We’re all waiting to see what happens next; we’re in this place of limbo and also feeling incredibly isolated throughout this process.”

Lewis is no stranger to the entertainment industry — having spent 15 years as a musician and appearing as a finalist on both “American Idol” and “The Voice” —  but he decided to come back to school to pursue filmmaking, which he describes as his “real passion.”

“I started editorializing my experiences not through music, but through videos and animations and doing that sort of storytelling,” Lewis explained. “Since then, I’ve had a series of projects that have begun to point me in this direction and now, [‘Waiting On Host’] is sort of the culmination of all of those small experiences.”

Although the initial script read more like satire, Lewis was forced to write a new draft when new COVID-19 restrictions nullified the premise of the film. When he went back to the drawing board, he decided that he wanted the story to be a more “thoughtful exploration” into this momentous period in everyone’s lives.

“I wrote the original draft in three days and I have been revising the script ever since. The process has been about refinement and continuing to identify the core of the story,” Lewis said.

This project is also a remarkable achievement for first-time producer Leilani Durden, a fourth-year film and media studies and Spanish double major.

Durden spent her high school years in front of the camera as an actress and didn’t start working behind the scenes until she came to UCSB, but looking back, she could see that the producing bug had always been there.

“I would always watch the extras that would be provided on DVDs and I would watch the film again with the voiceovers from the directors and the producers and the actors because I just loved hearing the details about how this film actually came together,” she revealed. “No sane person goes through hours of extras unless they’re interested in production.”

As for how she feels about making her producing debut during the pandemic, Durden says that there is a silver lining despite the circumstances.

“I’m not upset that I have to produce during [COVID-19] because now I see that my standards are now technically ‘above and beyond,’” she said. “For the future, I know how to be cautious but I’m also learning how to be patient. I think I’ve learned how to be a more efficient person and a more efficient producer.”

Needless to say, the current circumstances are less than ideal for a film shoot, but the crew quickly habituated themselves to the unofficial sponsor of the pandemic: Zoom. “We have multiple people on the call but we use the ‘hide non-video participants’ setting so we can have multiple people recording the Zoom session but their faces or their boxes won’t show up,” Durden explained. “We just do that for redundancy and to make sure that everything that gets captured is of good quality. We upload the footage to an online database and our editors chop up the scenes and we build from there.”

The entertainment industry as a whole has transformed substantially in the past year and the pandemic has given both studios and audiences the opportunity to reflect on the changes that are necessary in the film business in a post-COVID society.

“Right now, the film industry is transitioning to the small screen, but theater attendance was down even before, and I think that trend will likely continue,” Lewis said. “I would love to see the industry explore other mediums, like VR. I would love to see a movie in VR.”

For Durden, inclusion and representation, both in front of and behind the cameras, has never been more important, especially in the wake of far-reaching social activism movements of the past year. “I would love to see more Asian people, more Indigenous people and more Black people of all skin tones on the screen,” she said. “I just want to see film as what the world really is and not what we personify the world to be.”

“Waiting On Host,” which is expected to wrap post-production by the end of winter quarter, does not have a set premiere date as of now as the department continues to look for COVID-friendly exhibition alternatives for the near future. In the meantime, more information about the film can be found on Instagram at @waitingonhost.