The Daily Nexus
Film & TV
In Review: Chloé Zhao’s Quiet, Contemplative “Nomadland” Has a Different Vision for the American Dream
February 26, 2021 at 11:38 am by Luc Le

We’ve experienced incalculable loss over the past year or so — of jobs, of community, of businesses and, of course, of lives. Perhaps the starkest loss of all, however, is the way the pandemic has shifted our individual worldviews inward and compressed them to fit in the interiors of our homes, our rooms and within the confines of a 2-by-2 Zoom chat box, isolated from human connection. But to save us from this reality, at least for a moment, comes Chloé Zhao’s “Nomadland,” a tale of freedom, empathy and hope — and one that might just be one of this year’s best films. 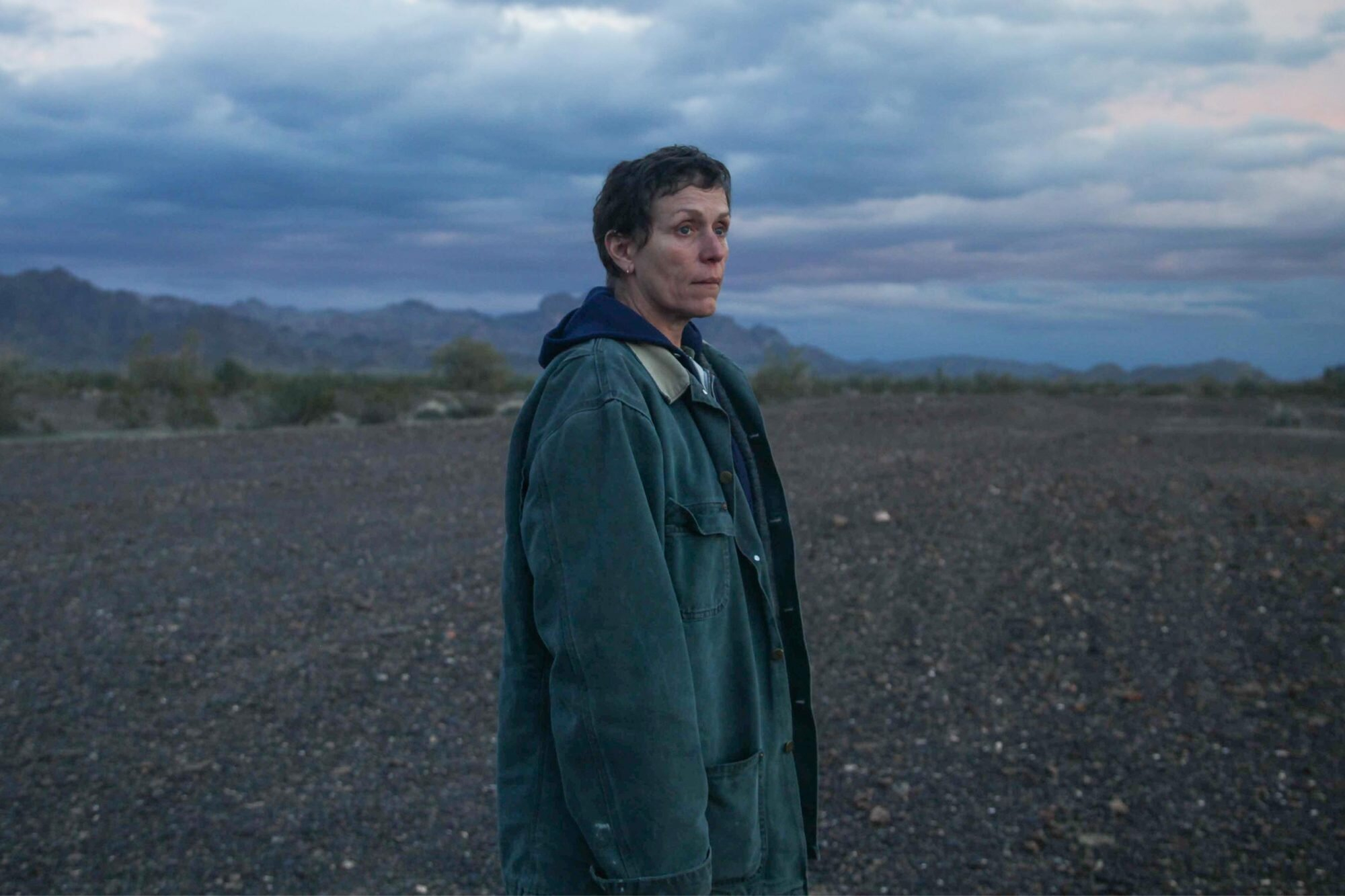 “Nomadland” follows the story of Fern (Frances McDormand), a woman who has suffered great loss in the wake of another disaster: the Great Recession of 2008. A widow who has lost her job at a sheetrock plant due to the financial crisis, Fern finds herself without the savings to afford living in her home. Instead, she decides to live in a converted old van, driving through the great American wilderness in search of seasonal work.

At 63 years old, Fern is far from the typical movie protagonist. In fact, at the beginning of the film, she doesn’t even have the capacity to change a flat tire. The freedom of living on the road is not foisted upon her by a desire for independence; rather, it was from the harsh reality of the market crash that forced countless Americans, many of them older, out of their homes and into a life of transience, a phenomenon documented by Jessica Bruder’s book of the same name on which the film is based. Yet, Fern has an unmistakable resilience about her, as she learns the ropes in a commune of fellow “RV life”-ers and forms close friendships with the other nomads she runs into while on the road.

For many of these nomads, the migrant lifestyle, rather than being a necessity for survival, instead becomes a rejection of the cyclical, monotonous existence that so many of the viewers are currently stuck in — and as a result, serves as a source of joy for the audience. There is a quiet catharsis to “Nomadland” in watching Fern regain so many of the simple acts of existence that we’ve lost in the past year: to be able to travel freely, to bond with strangers over a cigarette or to commune around a bonfire under the stars.

Zhao’s camera displays it all with a restrained, understated style, framing the nomads with a closeness that often borders on being documentary-like. Indeed, the authenticity of “Nomadland” is no accident. Nearly all the nomads, save for David Strathairn’s Dave, play themselves and this authenticity lends the film much of its power. There are real stories here: real loss, real sorrow, but also real human connection and a real sense of freedom, one that feels like a cool hand across the brow in our confined pandemic existence.

McDormand’s performance fits right in with the nomads, bringing enthusiasm and empathy that is sure to win widespread acclaim come awards season. But it’s also here where “Nomadland” puts a bit too much of its heart on its sleeve, and there are times when the film’s characters seem to preach to the audience the merits of a nomadic lifestyle even though the film does more than enough to effectively show it.

These complaints seem quaint, however, when compared to the sheer beauty of “Nomadland” in both its humanity and cinematography. Zhao’s camerawork is equal parts stark and breathtaking; unafraid to leave viewers in wide shots of gorgeous Western landscapes while Fern takes a cigarette break or simply stares off into the distance, it gives the audience the chance to contemplate, reflect and, most of all, breathe.

Like the nature of its wandering nomads, “Nomadland” never stays in one place for long, moving past locations, past characters and through time with little fanfare to speak of, save a shot or two of Fern’s white Transit van driving down empty highways. The effect created is less of a typical film’s carefully planned progression and more of a mosaic of vignettes — a campsite-managing job here, a walk through a national park there.

There’s no grand emotional journey or world-ending stakes here; it’s just a woman, her van and the people she meets along the way. As a result, without a strong core narrative to pull us along, the meandering nature of the film can cause the story to lose momentum. But rarely does this ever last for long; after all, on the open road, there’s always something new to see.

It might seem unfair to judge a film based upon the world it’s been released in. But it’s hard to watch “Nomadland” and not think that it’s the film that the world needs during this moment. To be sure, there is darkness in “Nomadland”: death, grief and suffering, the same as in our world.

But the film instead chooses to show us a different perspective, that of strangers who have lost nearly everything still willing to give away their possessions for nothing in return, of kindness without reservation and of joy in the face of unimaginable loss. “Nomadland” chooses to show us the light. In the world we live in today, that just might be the bravest thing of all.