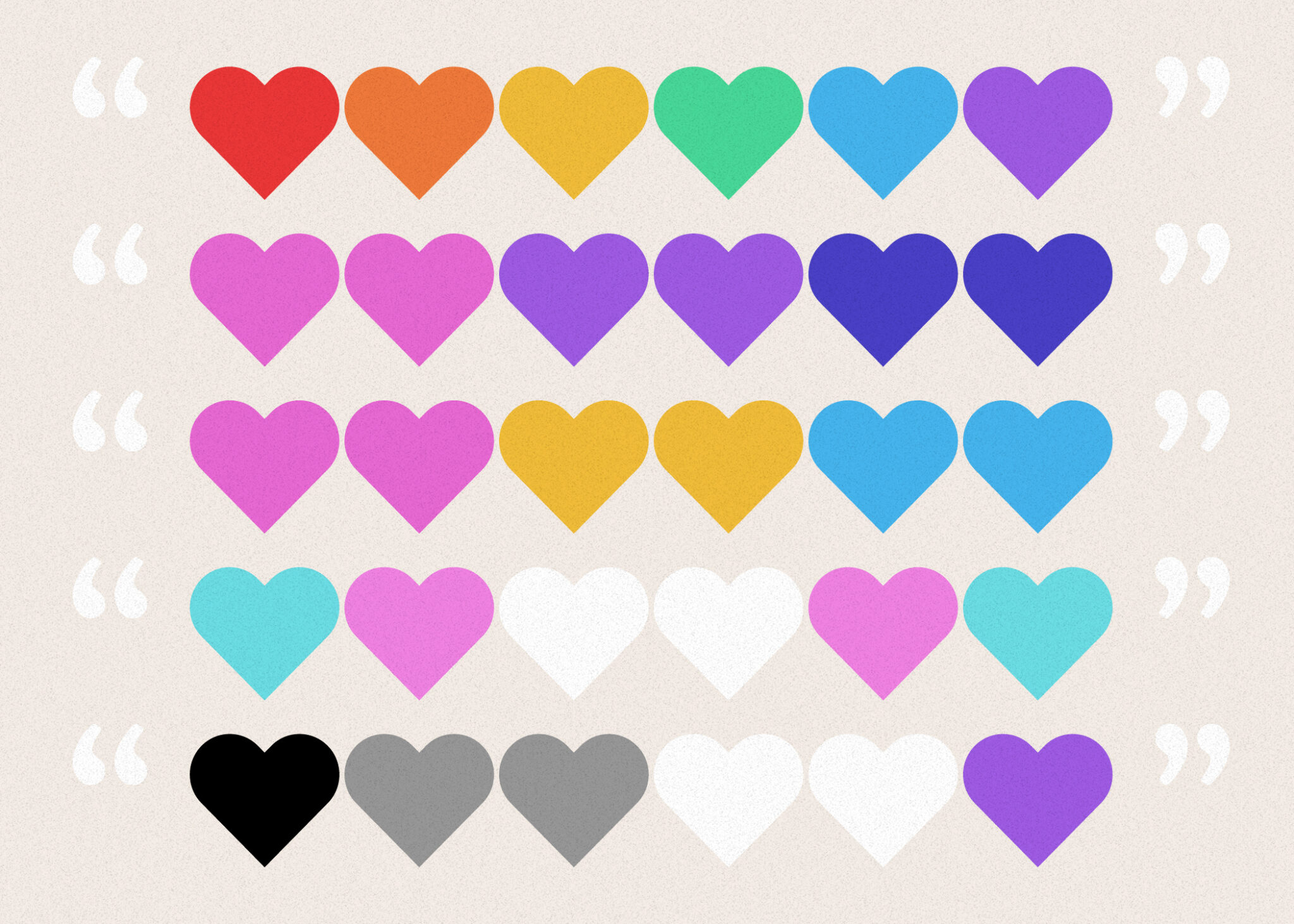 Oh, the Instagram bio. A sacred place for snappy punchlines, miscellaneous emojis and maintaining the delicate balance of looking cool to both your college friends and your distant relatives. I can’t count how many times I’ve nitpicked my own bio’s phrasing and aesthetic appeal, but one line has remained constant since the day I downloaded the app: a purple heart, a pink heart and a blue heart.

For those who don’t know, purple, pink and blue are the colors of the bisexual pride flag. I’ve been out for years and those three little hearts have felt perfectly comfortable until relatively recently, when I started leaning away from using the term bisexual to describe myself. Choosing a new label to describe yourself is something everyone goes through at some point (like transitioning into calling yourself a Gaucho instead of whatever your high school mascot was), but it can be more complex for folks in the LGBTQ+ community.

My process specifically is more complicated in the context of one particular debate: bisexuality versus pansexuality.

The bisexuality versus pansexuality issue has become an increasingly discussed topic as the term “pansexuality” has gained attention from mainstream culture in recent years. As more and more folks have begun to explore the label, disputes and disagreements about pansexuality’s place within the LGBTQ+ and bisexual community have sparked conversations about how and why people use different labels to describe their experiences.

The argument is complex right from the get-go partially because it can be hard to pin down universally agreed-upon definitions of both words. Some folks point to the Latin prefixes respectively attached to both words in order to illustrate the difference between them. If you look at it that way, “bi” means “two” and “pan” means “all,” so theoretically, that means that bisexual people are attracted to two genders and pansexual people are attracted to all genders. However, according to Robyn Ochs, a prominent writer and activist in the LGBTQ+ community, bisexuality can also be defined as “the potential to be attracted romantically and/or sexually to people of more than one gender, not necessarily at the same time, not necessarily in the same way, and not necessarily to the same degree.” Yet another definition explains that bisexuality means that a person is “attracted to people who are the same gender as themselves, as well as those of different genders” and pansexuality means that a person “is attracted to all gender identities.”

The debate becomes even messier when some people argue that the term “bisexual” inherently implies the existence of a strict male-female gender binary. As LGBTQ Nation journalist Daniel Villarreal explains, this line of thinking “excludes people who identify as something other than male or female, including androgynous, agender, bigender, gender-neutral, gender-fluid, and non-binary people.” Many members of the bisexual community, including myself, strongly push back against that argument precisely because of its exclusionary overtones and inaccuracy in describing the experiences of many bisexual people. Even so, negative implications can sometimes stick around.

When we begin to place positive or negative values on people who use certain words to describe themselves, we end up creating more division than unity.

With so many competing definitions and connotations, it’s no wonder that there is debate and confusion when it comes to understanding and choosing “the right” label. The process can be overwhelming and some definitions may even feel alienating. When you add in the additional risk of judgement that may come with electing to use one label or the other, it can feel like your personal choice has broad-sweeping implications that don’t match up with your experiences.

Furthermore, assumptions about certain labels, like the idea that bisexuality excludes gender-nonconforming folks or that pansexual people are hypersexual, can enforce the belief that one label is morally “better” than another. When we begin to place positive or negative values on people who use certain words to describe themselves, we end up creating more division than unity. In minority communities like those of queer people, this can be particularly harmful and hurtful, especially when it creates inter-community conflicts.

Increased pressure on choosing a label can also create tensions for folks who simply aren’t sure what word, if any, fits their experiences most accurately. This can be a particularly difficult feeling for younger members of the queer community. Trying out different labels is a perfectly normal part of exploring your identity and there is nothing wrong with finding out that one word was helpful in your process for transitioning to a more accurate one. If that means you start out identifying as bisexual only to discover that pansexual fits better, so be it! As Teen Vogue puts it: “What it means to be bisexual or pansexual is … largely up to the person who identifies that way. As with any sexuality, whatever word feels best is best.”

Essentially, bisexuality and pansexuality have different but overlapping definitions (some parts of the community even advocate for the idea of bisexual as an umbrella term) that describe similar experiences. Attaching negative or positive assumptions and implications that create pressure to use one word over another does more harm than good to communities of people who simply want recognition and validation for their identities. As we move forward into an increasingly respectful society and collective community, remembering to be thoughtful about other people’s labels and experiences will push us toward becoming a more compassionate world.

For now, the three hearts in my bio have been replaced by a single rainbow flag. And that’s just how I like it.

Mikayla Buhbe understands that the process of exploring labels can sometimes feel confusing, exciting, restricting or liberating, and wants you to know that it’s perfectly okay to have any range of feelings about it. If you’re looking for support, UCSB’s Resource Center for Sexual & Gender Diversity can help.

Thank you, Mikayla, for this thoughtful article. This is spot on: “When we begin to place positive or negative values on people who use certain words to describe themselves, we end up creating more division than unity.” I would rather we take our considerable energy and — instead of arguing among ourselves which labels are the best ones — used that energy to hold complex, nonbinary, inclusive space for ALL of us. Keep on writing.