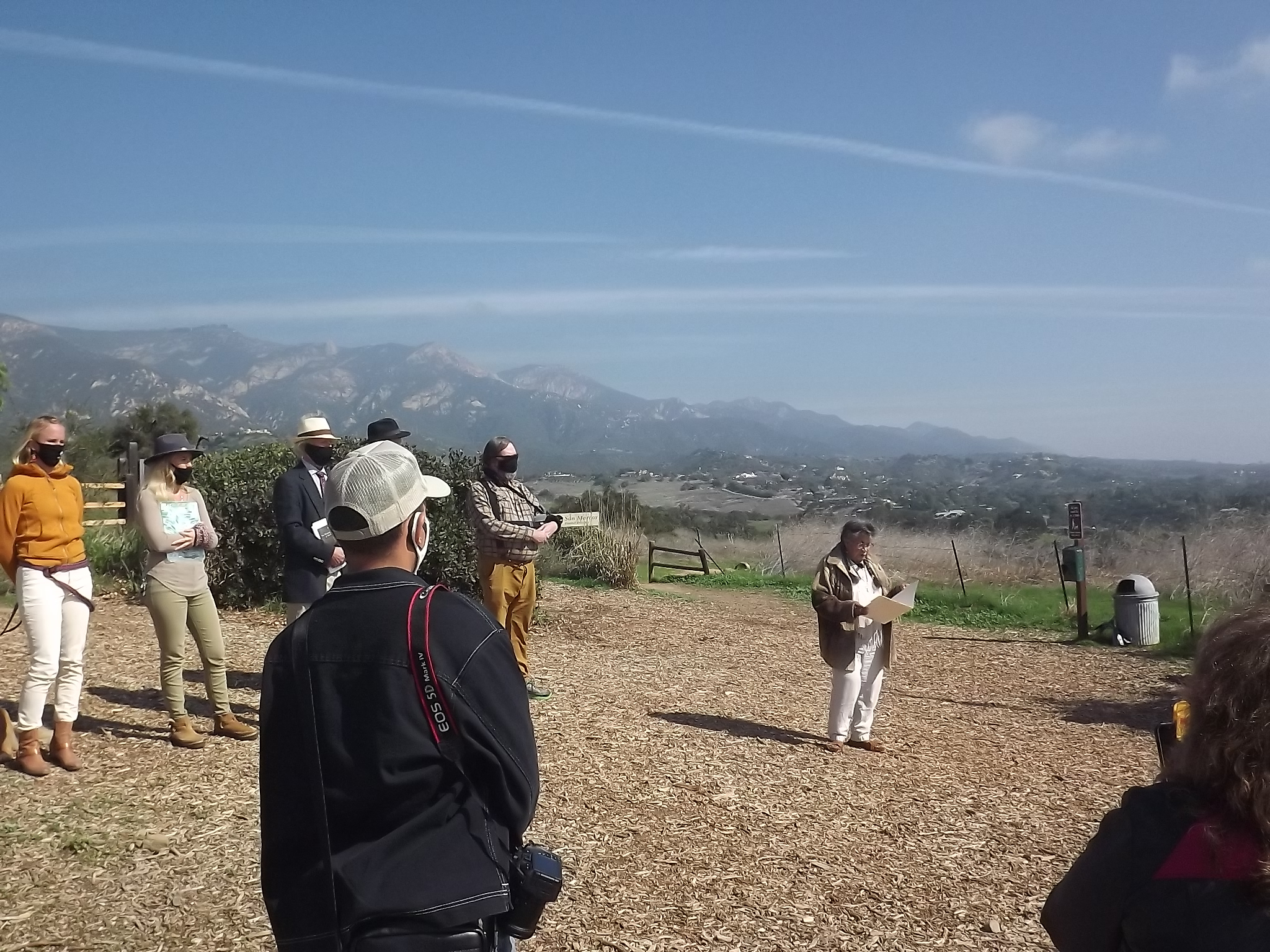 The San Marcos Foothills Preserve is a protected area encompassing 200 acres of oak savanna and grassland between Santa Barbara and Goleta in the foothills of the Santa Ynez Mountains.

It is one of the largest and most productive grasslands in Santa Barbara County, according to Channel Islands Restoration (CIR), which has been performing habitat restoration on the preserve and the surrounding undeveloped land — including West Mesa — since 2010.

The group, represented by attorney Marc Chytilo, has filed eight appeals of the Santa Barbara Architectural Board of Review’s approval of eight homes set to be built on West Mesa, a parcel of undeveloped open space immediately adjacent to the San Marcos Foothills Preserve.

Save the San Marcos Foothills has also filed a lawsuit against Santa Barbara County for issuing easements which would permit the installation of flood control structures on county park land, according to Chytilo.

The organization is concerned that these would significantly damage the undeveloped grassland and the surrounding watershed, Nancy Tubiolo, an organizer of the demonstration, said in an interview with the Nexus.

“I think our environment is so important that it’s worth the very uncomfortable legal actions that we’ve had to take,” Tubiolo said.

Held at the entrance to the preserve, the demonstration opened with a blessing by Ernestine Ygnacio-De Soto, a Barbareño Chumash Elder. Ygnacio-De Soto expressed solidarity with Save the San Marcos Foothills and acknowledged the cultural heritage of the Chumash Nation which exists on the land.

The dispute can be traced to the mid-2000s, when the Chadmar Group, the development company in ownership of the undeveloped land, purchased 377 acres of land in the foothills with the intent of setting aside the vast majority for preservation — with one exception being a parcel of land on the West Mesa.

Initially, the organizers were hoping to be able to buy the undeveloped acreage at “fair-market value,” estimated by CIR to be worth 5.5 million dollars. At the time of publication Save the San Marcos Foothills has raised 1.3 million through CIR, including 1 million dollars from an anonymous donor in early October.

However, even if Save the San Marcos Foothills is able to raise 5.5 million dollars to buy the land slated for development, they still may not actually have enough to purchase it. The developer’s valuation of the proposed development is much higher — within the realm of 16 million dollars, according to CIR.

The homes slated for development on the West Mesa were originally approved in 2005. However, this was before the Eastern Goleta Valley Community Plan was adopted, a policy which sets stringent standards for new development in order to protect the aesthetic beauty of the area. Chytilo is using this as the basis for the appeals.

“When [the construction] was approved in 2005, there was not a requirement to consider the scenic views of this property from other vantage points throughout the community so now there are new policies that require that,” Chytilo said in an interview with the Nexus.

“Those are issues that we’re going to be arguing to the Planning Commission, as they consider those eight appeals.”

Elihu Gevirtz, the senior ecologist with CIR, also stressed the ecological importance of the preserve and its role in linking other habitats on the South Coast and playing host to various bird species whose numbers have recently declined, including white-tailed kite, marsh hawk, meadowlark and burrowing owls.

“They all depend on this grassland. And my fear is that if this property is allowed to be developed then it’ll be another chink in the armor where these birds disappear,” Gevirtz said.

“The same birds that appear here also occur on More Mesa which is just a few miles away. And so there’s a connection — there’s so few grasslands left in this region that they’re all just incredibly important.”

However, for others, the potential loss of the grassland hits closer to home. The preserve is also beloved among many local recreationists for its accessibility, scenic views and sentimental value.

“This whole area — it’s like losing a friend … I’ve come up here for solace knowing that this was always here. This is like someone very dear to us and I’m like ‘Oh my gosh! They’re gonna take it away,’” Tubiolo said.

From what I have read it is homes on 25 acres. The owners are only allowed to landscape a small portion of the property around the home. The rest of the property is left in a natural state. The developer gave over 300 acres to the public. It would seem this is a win for the environment. Nobody wants to give the 300 acres back if developers are not allowed to build. What happens to the surrounding area? Should the avocado orchard to the North get taken away? Should the orchard be replanted with native plants?Should the homes across the… Read more »

Last edited 1 year ago by Jose