The Daily Nexus
Science & Tech
A Time For Reflection At Terror Rift
February 5, 2021 at 11:30 am by Sean Crommelin

“All work that is done in Antarctica is hard and difficult,” Bruce Luyendyk, a professor emeritus and oceanographer with the Earth Research Institute at UC Santa Barbara, told me over Zoom. 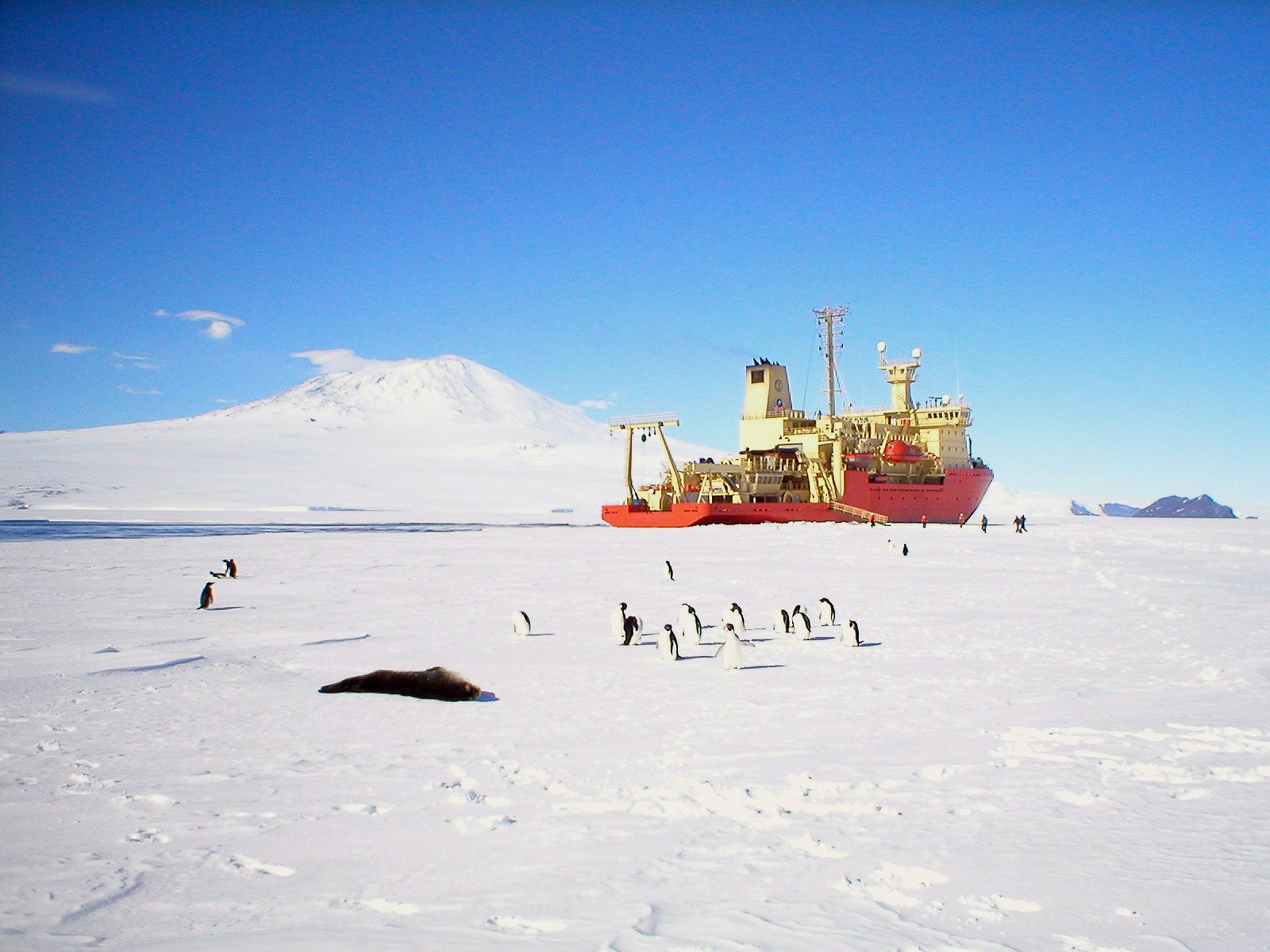 Research icebreaker N.B. Palmer in the sea ice of McMurdo Sound. Mount Erebus is in the background. This ship was used in UCSB surveys of the Terror Rift in the Ross Sea by Luyendyk and his students. Courtesy of Bruce Luyendyk

The temperature is miserably, sometimes even incomprehensibly, cold. The weather can be inclement and stormy. On marine expeditions, sea ice and other hazards compound the work that researchers must do — and this work must be done in shifts, 24/7, around the clock.

The scenery, of course, also exemplifies a sublime, primordial and powerful beauty. This stark, desolate landscape distracts from the difficult nature of the work, at least for some people.

In the western Ross Sea, adjacent to the Ross Ice Shelf and the Transantarctic Mountains, exists Ross Island, a conglomerate of four volcanoes making up one of the highest islands in the world. Crowning Ross Island is Mount Erebus, a volcano which rises up 12,000 feet above sea level.

“There’s McMurdo Sound, and across the McMurdo Sound are the Transantarctic Mountains, which are as high as the Rocky Mountains, but they’re coming out from sea level rather than 5 or 6,000 feet,” said Christopher Sorlien, a research geologist with UCSB’s Earth Research Institute.

Luyendyk and Sorlien have been working in the region for decades, occasionally accompanied by undergraduate field assistants.

A chunk of their research interests span the geologic history of the Ross Sea region, in particular the boundary between west and east Antarctica; there lies a deep basin near Ross Island that is hundreds of kilometers long and tens of kilometers wide, known as the Terror Rift.

To uncover the story of the region as told by the Terror Rift, Sorlien, Luyendyk and their collaborators with the National Institute of Oceanography and Applied Geophysics in Trieste, Italy, have been working with seismic reflection data to construct seismic profiles and visualize faulting along the rift.

Faults are a common topic broached by Californians, particularly in Southern California where the periodic rumblings of earthquakes can sometimes prompt mention of “The Big One,” a predicted cataclysmic earthquake set to strike the region.

The expected cause of this would be a fault, specifically the San Andreas Fault, a boundary between the Pacific and North American plates which veers from north-south to east-west just north of Santa Barbara. From Santa Barbara county southward, it follows the Transverse Ranges before swiftly descending into the Salton Sink.

The Terror Rift is similarly a plate boundary — or at least could be — between the eastern and western portions of the Antarctic continent. A big question for Luyendyk, Sorlien and their collaborators is just how long ago the rift was an active fault, or if the rift is even an active fault in the current moment.

“[We] care about that, because the plates that are hovering around on the Earth are all connected to one another, they’re touching one another in some fashion, they’re pulling apart, sliding past one another or going underneath one another,” Luyendyk said.

In order to understand how plates are moving with regards to one another, and particularly the rate at which they’re moving, knowing the nature of plate motion and what is and isn’t a current plate boundary is incredibly important, according to Luyendyk.

Currently, to parse out plate motions in many regions, indirect measurements must be used. Understanding whether the Terror Rift divides two plates or only marks the boundary between old plates will generate ripples globally, as well as make computing plate motions in other regions significantly easier.

“So that’s why it’s significant from a plate tectonics perspective. We want to know if it’s active today, because that would allow us to correctly compute plate notions in places where it’s very difficult to measure,” Luyendyk said.

Thus, the faulting of the Terror Rift needed to be mapped out and dissected methodically using seismic reflection data.

In seismic reflection, sound is transmitted down from a vessel toward the seafloor. This sound is reflected back toward the vessel; the different properties of Earth’s layers — such as contrasts between different types of sediment — allows one to detect the shapes of different stratigraphic layers.

“So the speed of sound in each of the layers as you get down deeper affects these reflections which come back. You process this and get a profile which is like a cross-section  — but distorted — of the Earth. Then, you interpret that,” Sorlien said.

Through this, the researchers were able to glean the geologic history of the Terror Rift from changes in the thickness of sedimentary rock layers along the shoulders of the rift and the deepest section of the basin. According to Luyendyk, Sorlien and their collaborators, the Terror Rift has been moving since at least 29 million years ago in the south, and 21 million years ago in the north.

However, since 11 million years ago, there has been relatively little change or movement in the Terror Rift.

Luyendyk is hesitant to call the rift an active plate boundary at present because of this. Instead, he and his collaborators believe the culprit for this faulting is intraplate deformation, which occurs within a plate rather than at the boundary between two plates.

“The [recent] deformation rates are so small … that it’s almost kind of a ‘doesn’t matter’ result,” Luyendyk said.

“But regardless, this study was done so carefully — it’s such a comprehensive study — and it does show that there’s different regions in this place, the Terror Rift, where we know it was a very active plate boundary 10 or 11 million years ago.”