The UC Regents are currently considering new proposals to reform financial aid, which will be intended to improve affordability and alleviate the debt burden that many students find themselves with following graduation. 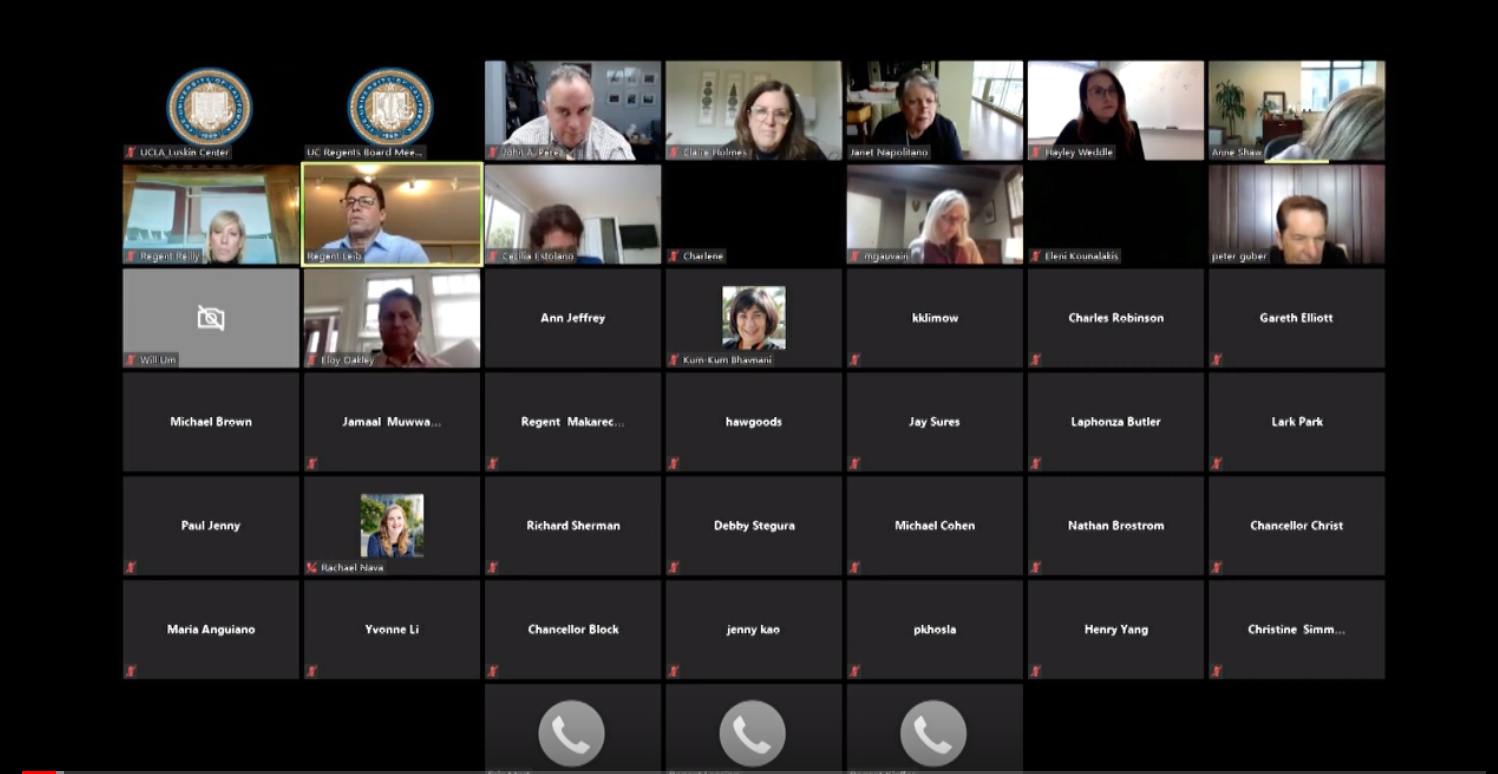 The discussion involved a re-evaluation of key elements of the Education Financing Model, which ensures the proper allocation of financial aid resources across the UC and tailors financial aid packages for individual students. Courtesy of the UC Board of Regents

The discussion, held during the Academic and Student Affairs Committee meeting on Nov. 18, involved a re-evaluation of key elements of the Education Financing Model (EFM), which ensures the proper allocation of financial aid resources across the UC and tailors financial aid packages for individual students, according to the executive summary from a UC Regents meeting in March 2020.

EFM is guided by three principles. First, the total cost of attendance incurred by students is how the UC gauges the affordability of their higher education. Second, the total cost of attendance should be able to be covered by student work and parental contributions, in conjunction with state and federal financial aid programs. And third, what constitutes affordability according to the UC must also take into account whether UC’s expectations of work and debt are actually manageable for students.

The primary focus of the Nov. 18 meeting was Option 7: The Road to the Debt-Free UC. Option 7 proposes that the UC change the stated goal of the EFM so UC students are able to meet their self-help expectation through work and avoid borrowing, according to the executive summary of the meeting.

Currently, there are three primary sources of aid which supplement work, loans and expected parental contributions in the EFM’s calculation of the total cost of attendance: the UC Grant, the Pell Grant and the Cal Grant, as labeled in the executive summary.

Option 7 came from discussions with UC President Michael V. Drake, who had instituted similar initiatives at Ohio State University. According to Michael Brown, provost and executive vice president for academic affairs of the UC, this approach managed to reduce the average debt of students without “slowing their time to degree.”

Current funding levels do not allow for the implementation of Option 7, according to the Systemwide Education Financing Model Steering Committee, which is in charge of overseeing undergraduate financial aid policy.

However, by incorporating an expected $8,000 annual contribution from part-time employment, the expected amount of student loans taken out by students — and in turn the burden of debt later on — could decrease from $5,000 dollars a year to $2,000 a year, according to Charles Nies, the vice chancellor for student affairs and member of the committee.

“[It was] felt that improving the goal of our self-help model to be reliant on part-time employment would be an important step in the right direction. Members also felt that framing of the debt-free path could help with some private fundraising efforts,” Nies said. “It communicates a clear target, as well as outcome to potential donors in helping to close that $2,000 gap.”

Nies also emphasized the UC’s need to expand opportunities for employment on its campuses following the pandemic, especially for low-income students. According to Nies, because Cal Grant already provides funding for so many students, properly reforming the existing system is crucial in ensuring desired outcomes for many students.

“In 2019-20 alone, 79,000 low-income students and the University of California received over $982 million in Cal Grants support. Therefore, the contours and timing of Cal Grant reform could have a profound impact on our neediest students,” Nies said at the meeting.

One suggestion brought up in the meeting was to bring more students on as UC staff members to help alleviate financial burdens.

“I think that perspective is something that I personally would love to see more of, so that we can keep our institutional knowledge within and don’t have to have people kind of scramble looking for jobs after graduation when they know they have opportunities within their own higher education institution,” Lucy Tseng said, a staff advisor to the Regents, said.

One problem with this approach is that not all on-campus student jobs align with students’ career goals, such as positions in housing and dining. UC Santa Cruz Chancellor Cynthia Larive said more emphasis should be placed on institutions like career centers to raise awareness of relevant professional development opportunities on campus.

Students who work on-campus have higher retention rates than those working off campus, Nies said. But many students either can’t find open on-campus job opportunities or don’t have the time for a job due to school work, Shawn Brick, executive director of UC Student Financial Support, added.

“I think this speaks to the institutional obligation… to take seriously the university’s role in ensuring that those jobs are available,” Brick said.

Another student debt problem to consider is transfer students, who sometimes arrive at the UC with already-existing debt, according to Regent Eloy Ortiz Oakley, who is also the chancellor of the California Community Colleges system. Oakley said the UC should provide a finance playbook for transfers, as well as establishing programs to address the issue of debt before students arrive at the UC.

Oakley said there might be potential under President-elect Joe Biden to advocate for student loan forgiveness at the federal level since Biden has a history of expressing support for such policies.

In response to a question about how additional financial aid will impact the current practices, Brick said there is potential for expanding Pell Grants under the Biden administration which may increase aid overall, rather than redistribute finite existing resources.

“And when that’s received, we would have some policy options about how some of that could go to offset the current self-help,” he continued.