The Daily Nexus
Events
UCSB Arts and Lectures Presents: Yo-Yo Ma and Kathryn Stott
December 3, 2020 at 10:07 am by Marisol Cruz

At the National Kaohsiung Center for the Arts in Taiwan on Nov. 14, internationally acclaimed cellist Yo-Yo Ma and pianist Kathryn Stott performed highlights from their upcoming joint album, “Songs of Comfort and Hope.” A recording of this performance was made available to students through the UC Santa Barbara Arts and Lectures’s collaboration with UC Berkeley and Opus 3 Artists, a management firm representing many classical artists, including Ma. 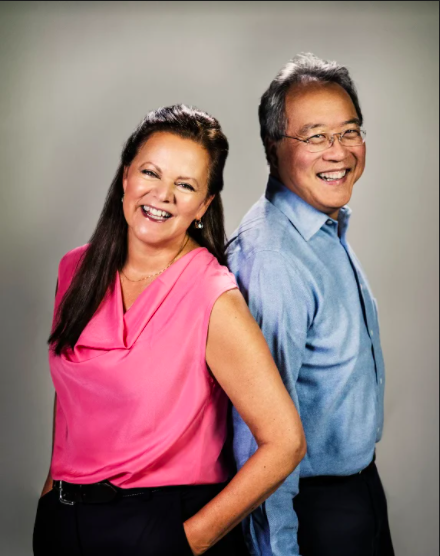 Before the performance began, Jeffrey Geffen, the executive and artistic director of Cal Performances, made a brief opening statement. Declaring that “It is hard to think of an artist who is more loved or revered than Yo-Yo Ma. His name is synonymous with excellence,” he acclaimed Ma’s ability to unite people through music. The recital then began with the sound of applause from the audience as Ma and Stott walked on stage. They donned face masks, a reminder that while this performance has been allowed to take place under rare circumstances, the world is still in the midst of a pandemic.

The pieces performed from their upcoming album demonstrate a wide range with a variety of covers from artists from different countries as well as from various time periods. The performance began with “Wu Tong: Far Away Mountain,” a soft opening with calm cello playing, accompanied by light piano. The next piece, “Robert Schumann: Fünf Stücke im Volkston, op. 102,” was more dramatic with a fast-paced tempo. The deep concentration was apparent on the musicians’ faces as they immersed themselves in the music; Ma closed his eyes while playing and Stott quickly ran her hands across the piano.

After this piece, Stott briefly welcomed both audience members in the Art Center and viewers watching from home. She commented on her long friendship with Ma, spanning more than 35 years, and how they have played in Taiwan multiple times together during this span. She applauded how the country has handled the pandemic and has allowed music to become possible again.

The musicians then transitioned into the solemn and peaceful “Harry Sdraulig: Fantasia on Waltzing Matilda.” They also played “Traditional Irish (arr. Benjamin Britten): The Last Rose of Summer,” a ballad that sounded mournful and longing. 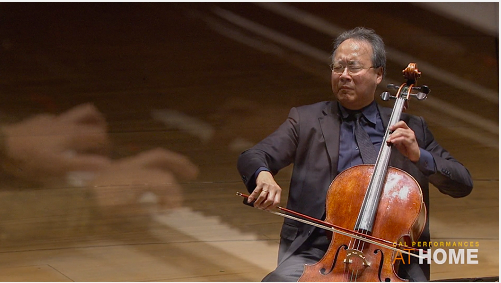 Courtesy of Cal Performances at Home

Ma then took some time to speak to the audience. He mentioned how happy he was, asking the audience if they felt the same as well, to which they enthusiastically responded that they did. He remarked that he was extremely grateful to be able to perform, joking that Stott says that he is old. “I am old, but I feel young!” he jovially exclaimed. He described his long friendship with Stott, how the duo have “experienced life together, have travelled to many places” and how they brought the music of these places to the audience through the performance in order to experience and appreciate these places together. Ma then discussed the impact of music in general. He stated that he believes music can touch one’s soul. Moreover, “music can build bridges, and not walls between us.” Ma concluded by reiterating Stott’s praise towards Taiwan and their ability to maintain the outbreak of COVID-19 that has now allowed for the two musicians to perform.

The duo resumed with “Wu Tong (arr. Li Xun/Ding Doudou): Rain Falling from the Roof.” The music greatly reflected the title of the song as the plucking of the cello strings and the accompanied gentle piano notes sounded like the pattering of rain. They then transitioned to “Manuel de Falla: Siete canciones populares españolas.” These seven songs had a more upbeat tone than many of the previous pieces played. The performance concluded with “Astor Piazzolla: Le Grand Tango,” which is one of the few pieces that was originally scored for a cello and piano. Ma and Stott ended the performance by providing a powerful rendition of the piece and appeared visibly moved. They received a standing ovation from the live audience.

The renowned Ma and Stott by no means need to prove themselves, yet every performance demonstrates their musical capabilities and their ability to work in tandem together.