The Daily Nexus
Events
A.S. Program Board Presents: A Virtual Q&A with John Mulaney
November 22, 2020 at 10:09 pm by Derek Mejia

This past Thursday, “The Comeback Kid” himself, John Mulaney, made a virtual appearance on Zoom for an event held exclusively for UC Santa Barbara students, courtesy of the Associated Students Program Board. During the 45-minute Q&A, the comedian touched upon everything from ghosts, one of his earliest jobs as a host of Saturday Night Live (SNL) and his advice to undergraduate students. The discussion was moderated by Associated Students (A.S.) Program Board member Gabriel Reyes, who asked Mulaney questions that were submitted by students before the event. 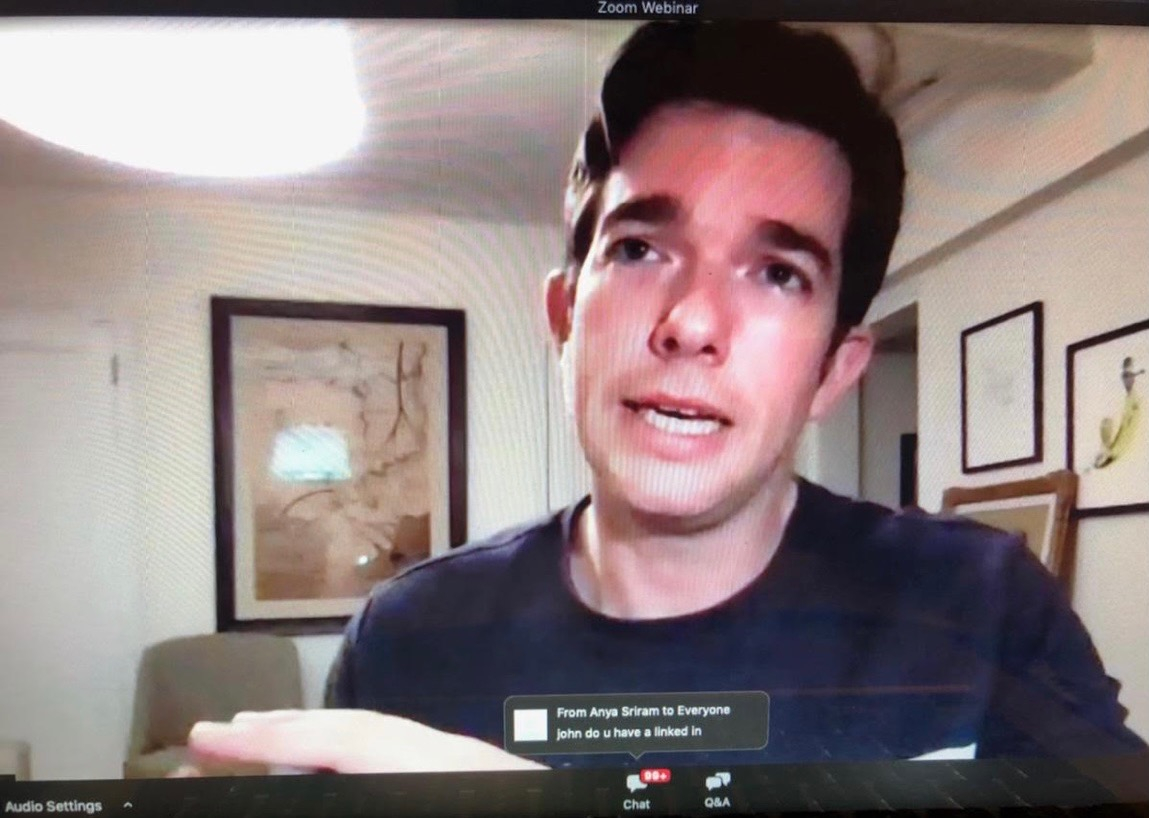 Mulaney started the Zoom call by accidentally taking a bite of his food. Acknowledging this faux pas, Mulaney commented, “Definitely started chewing something.” Jumping right into the questions, Reyes asked Mulaney how he’s been doing during the pandemic. Mulaney replied that he had recently performed a comedy show in a field. At that moment, the chat section became flooded with requests to see Petunia, his infamous French bulldog and the subject of many of his jokes. However, much to the dismay of the audience, Petunia was sound asleep and Mulaney would not wake her for all the money in the world. Reyes commented that during the first night of Delirium, which had featured Mulaney’s SNL colleagues Pete Davidson and Alex Moffat who later appeared on the SNL Halloween episode hosted by Mulaney, the attendees had asked about Petunia. Clearly, Petunia is a fan favorite among Gauchos.

Reyes followed up with Mulaney’s favorite ice breaker — “Have you ever seen a ghost?” — to which Mulaney commented that he has never seen a ghost, but he would like to see one. He also mentioned that he always asks the stage managers of the theaters and venues he performs in if they are haunted. Mulaney then asked Reyes if he’s ever seen a ghost, to which he confirmed that he has. They then had a conversation about ghost encounters and Mulaney commented, “I’m a little bit starstruck to meet someone who has seen ghosts.” The conversation subsequently veered toward the topic of sleep paralysis, which both the moderator and the guest were familiar with.

Reyes then asked Mulaney what it was like hosting SNL on Halloween in the middle of a pandemic (the last time he hosted was earlier this year on SNL’s first episode to ever air on Feb. 29). In response, Mulaney commented, “I’ve had more and more fun every time.” He was then asked if it was weird to write for another performer, to which he acknowledged that there was a sense of comfort to it.

Continuing the conversation, Mulaney was asked about some of his weirdest jobs. He recounted working at the Chicago Board of Trade, where he was a runner for a soybean company. Looking back, Mulaney acknowledged the absurdity of the soybean market. One of the attendees commented, “John says fuck capitalism.” The chat became flooded with solidarity comments as attendees wrote “Comrade Mulaney” and “The Communist Johnifesto.” Mulaney even recounted an interesting encounter with his boss and the insanity of the trade floor, which he likened to working at SNL.

At one point during the conversation, Mulaney drank from a can of Diet Coke and attendees began to cry, “Product placement.” He immediately explained why he was drinking a can of Diet Coke, noting the time difference as he was calling in from New York City. One of the more creative questions that Reyes asked Mulaney was if you were to be able to live indefinitely in a fictional universe, which would it be? Mulaney answered, “The Giving Tree,” the 1964 children’s classic by Shel Silverstein. He then proceeded to summarize the plot of the book, meticulously noting the absurdity of the plot. “You should re-write the book,” Reyes interjected.

When asked about his most bizarre show memories, Mulaney recounted walking onstage to perform a show and seeing a man who looked like CNN reporter Wolf Blitzer sitting in the third row, to which he reacted by laughing uncontrollably on the spot. He also described one of the worst shows he had ever performed at some campground in Tennessee, where he received one of the best heckles of his career. When describing the heckle, Mulaney gleefully recited the heckler’s words: “We would enjoy silence more than the sound of your voice.” Mulaney used his own humiliation to part some sage advice to students, declaring, “Enjoy the disaster.”

The final question of the night had Mulaney pondering the things he most loved and hated about college. He took the opportunity to sympathize with how UCSB students are spending the fall quarter taking courses online rather than in person. The thing he loved most about college was meeting his future collaborators, comedians Nick Kroll and Mike Birbiglia, and being able to take part in undergraduate events with great speakers. His final advice to UCSB students: “Hang out with your friends and go to public events.” Very sage advice for our uncertain times.