Sung Soo Kim, an assistant professor in UC Santa Barbara’s Department of Molecular, Cellular and Developmental Biology, recently won the prestigious National Institutes of Health Director’s New Innovator Award, a $1.5 million grant — awarded over a period of five years — which Kim will be able to put towards his further research into the systems that create an animal’s sense of direction. 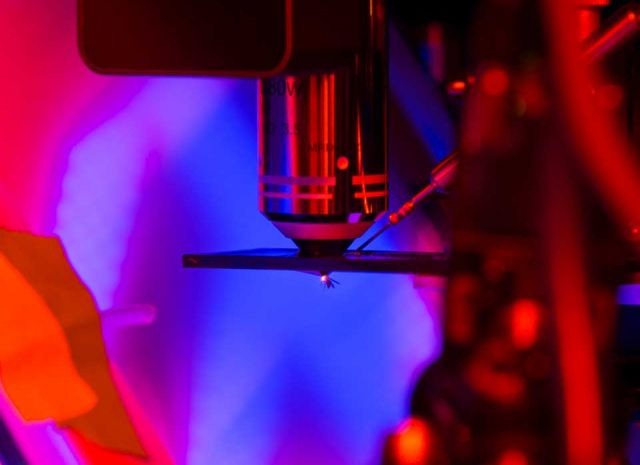 A tethered fly under a two-photon laser scanning microscope. Courtesy of Bryan James

Kim’s research specifically focuses on the fly brain, or rather, the neurons within the fly brain which allow the fly to navigate their surroundings. He has been working on research involving Drosophila melanogaster, the common fruit fly, for about nine years.

In mammals, a set of neurons known as head direction cells are responsible for maintaining and updating our sense of direction. These give the brain the information of traction we need to function in our daily lives.

Such neurons have piqued the interest of computational neuroscientists for quite some time. In recent years researchers have developed models to show how these neurons involved with navigation may collect visual information and translate this into a sense of direction.

“They came up with a really beautiful mathematical model. In this model, you see that individual neurons are aligned in a circle. There is a beautiful parametric connection between them,” Kim said.

Doubt existed among scientists who believed that such a model could not possibly exist in real life.

However, the Jayaraman Lab at the Howard Hughes Medical Institute, which Kim previously worked at, discovered compass neurons existing in the small and simple brain of the fruit fly. These compass neurons are arranged in a circular pattern, with the behavior of the compass neurons consistent with what computational modeling had yielded in its attempts to explain head direction cells in mammals.

“That was a big shock to the field,” Kim said.

During an interview with Kim, I was asked to entertain a hypothetical to better understand the processes he has been studying.

“Imagine that you close your eyes. You can’t see anything right now. I can bet, however, that you will still be able to find your way to the door. Right?”

Kim is aiming to examine the means by which visual information is combined in the compass neurons of the fly. In order to do this, Kim and his collaborators have been experimentally mapping the behavior of compass neurons to various stimuli.

Essentially, in Kim’s lab, flies are hooked up to “virtual reality” via an LED screen. These flies are simultaneously tethered to allow researchers to observe both changes in the wingbeat amplitude of flies — in the case of flying — or the rotation of a ball a fly is standing on — in the case of walking. The visual stimuli a fly is exposed to affects how the visual stimuli changes in response.

While this is happening, a two-photon laser scanning microscope allows researchers to monitor the activity of the fly’s neurons while the fly is moving around.

“You can actually record from those neurons and see where the fly is headed just by looking at those neurons,” Kim said.

“So by matching the fly’s behavior within the virtual reality arena, and the compass neuron’s activity, you can do very interesting things like see how those neurons are connected.”

Through this, Kim specifically intends to gain an understanding of the manner in which landmarks are selected by the brain in order to establish a sense of direction.

Now, with a new injection of funding, Kim and his collaborators will be able to further invest in new equipment, get more people on the project and refine their visual stimuli.

“I’m still studying these compasses, still using this experimental setup. The difference is that, [before], the visual scene was relatively simple. Now, I’m going to show the fly many different scenes and see how those kinds of different visual scenes are processed to generate a sense of direction in the fly,” Kim said.