The Daily Nexus
Opinion
Argument in the Office: Personality Tests — Benign Pastime or Testing our Patience?
November 12, 2020 at 1:00 pm by Katie Caracciolo and Priscilla Goh

MBTI Should Stand for “Made By Total Idiots”

Living, as we do, in the age of BuzzFeed quizzes and Co-Star, we have countless ways to categorize ourselves. From Hogwarts houses to the first initial of your soulmate, these tests offer countless fun and seemingly harmless ways to define yourself, all for the sake of passing the time in a particularly dull discussion section, for example.

These quizzes, however, hold a little of the prestige of more “scientific” personality tests: namely, the Myers-Briggs Type Indicator (MBTI). Based on the observations of influential 20th century Swiss psychologist Carl Jung, this test claims to categorize all people into one of 16 personality types, gauging factors ranging from extraversion or introversion to one’s tendency toward “judging” or “perceiving.” In a manner similar to the astrology enthusiasts of our generation, I have known individuals who shape their whole identity around the MBTI categories.

This test ignores, however, the dynamic quality of personality. Jung himself once stated that “every individual is an exception to the rule” of the personality types he created based on anecdotal observation alone. It is a given that as people change and grow over time, so do their personalities.

As shown in an article from The Washington Post, “longitudinal studies have reached different conclusions about when personality becomes fixed: during one’s school years or upon one’s entry into the workforce; at 17 or 21 or 25 or 30.” In other words, as college students, it is unlikely that our personalities are static enough to be measured in any objective way — that is, if they are ever even “fixed” at all.

Psychologists have long debated whether an individual or the situation that they find themselves in has more of an influence on behavior, but one thing is known for sure: “paper-and-pencil tests of personality [are] less reliable than observations of how people act, since people’s own reports of their behavior can be biased.” In other words, how we believe we’d respond to the situations posed by the MBTI likely differ wildly from how outside observers would perceive our actions.

With this point in mind, I asked five different people who I’ve known for varying amounts of time to take the MBTI test and answer how they believed that I would based on their real-world knowledge of my life choices and past actions. While my father, high school friend, middle school friend, roommate and a stranger (acting as a control) all had a blast participating in my “experiment,” each of my five participants got different outcomes and none of them resulted in the same type that I got when I took it for myself.

I suspect that, rather than suggesting none of these people have a clear view of my “true personality,” the way I, and indeed everyone, act and am perceived depends on those around me. Personality is only as real as the way those around us see it, and it does not and cannot exist in a vacuum.

Clearly, our actions are not as consistent as the creators of the Myers-Briggs Type Indicator suggest them to be. Indeed, The Washington Post writes that “a 1991 study … on the MBTI found that the indicator’s test-retest reliability … fell woefully short of the APA’s reliability benchmarks: Only 24 to 61 percent of subjects received the same result when they took it multiple times.”

If the test offers results that are neither consistent with internal reflections or external observations, then what could it possibly be useful for?

The simple answer, of course, is that it’s fun. Despite my stance on the uselessness of the MBTI, I still felt a jolt of pride when the test declared me to be the “protagonist” type. Even this small pleasure, however, points to a flaw that both my father and Vox writers Joseph Stromberg and Estelle Caswell pointed out when reflecting on the test: “No matter what type you’re assigned, you get a flattering description of yourself,” causing you to put more stock in your result than you otherwise would with a harsher assessment.

In addition, as is also the case with zodiac signs, the MBTI descriptions are vague enough that any person may see themselves as fitting into multiple categories. This, when compounded with the flattering descriptions, produces the Barnum-Forer effect, described by the Encyclopaedia Britannica as “the phenomenon that occurs when individuals believe that personality descriptions apply specifically to them (more so than to other people), despite the fact that the description is actually filled with information that applies to everyone.”

Even the more neutral descriptions could apply to anyone. Who doesn’t find “the spark they feel when they connect with someone who really gets them” … exhilarating? Essentially, the categories presented by the MBTI are so vaguely flattering that they render themselves useless.

As bluntly stated in an article from Vox, “The Myers-Briggs is useful for one thing: entertainment. There’s absolutely nothing wrong with taking the test as a fun, interesting activity, like a BuzzFeed quiz.”

This, however, may not even be true, for since its creation, the use of MBTI in hiring practices has become more and more prominent. According to The Washington Post, “One in five Fortune 1000 companies uses some means of personality testing to screen job candidates, both to hire the right type of person and to eliminate unfavorable types.” We cannot consider such tests to be “harmless fun” when the false faith we place in them has the power to make or break careers, lives and relationships.

People are simply too complex for personality psychologists (or non-psychologists, as in the case of the official creators of the Myers-Briggs Type Indicator) to shove them into tiny boxes. This fact, though perhaps discouraging to some more introspective readers, offers a unique challenge to anyone getting to know those around them, or even themselves, on a deeper level. The answers cannot be found in 93 simple questions, but we must be willing to put in the work to connect with our friends, relatives and coworkers without the help of amusing online pseudoscience.

Katie Caracciolo firmly believes that the only valid personality categorizer is the Nexus horoscope column. 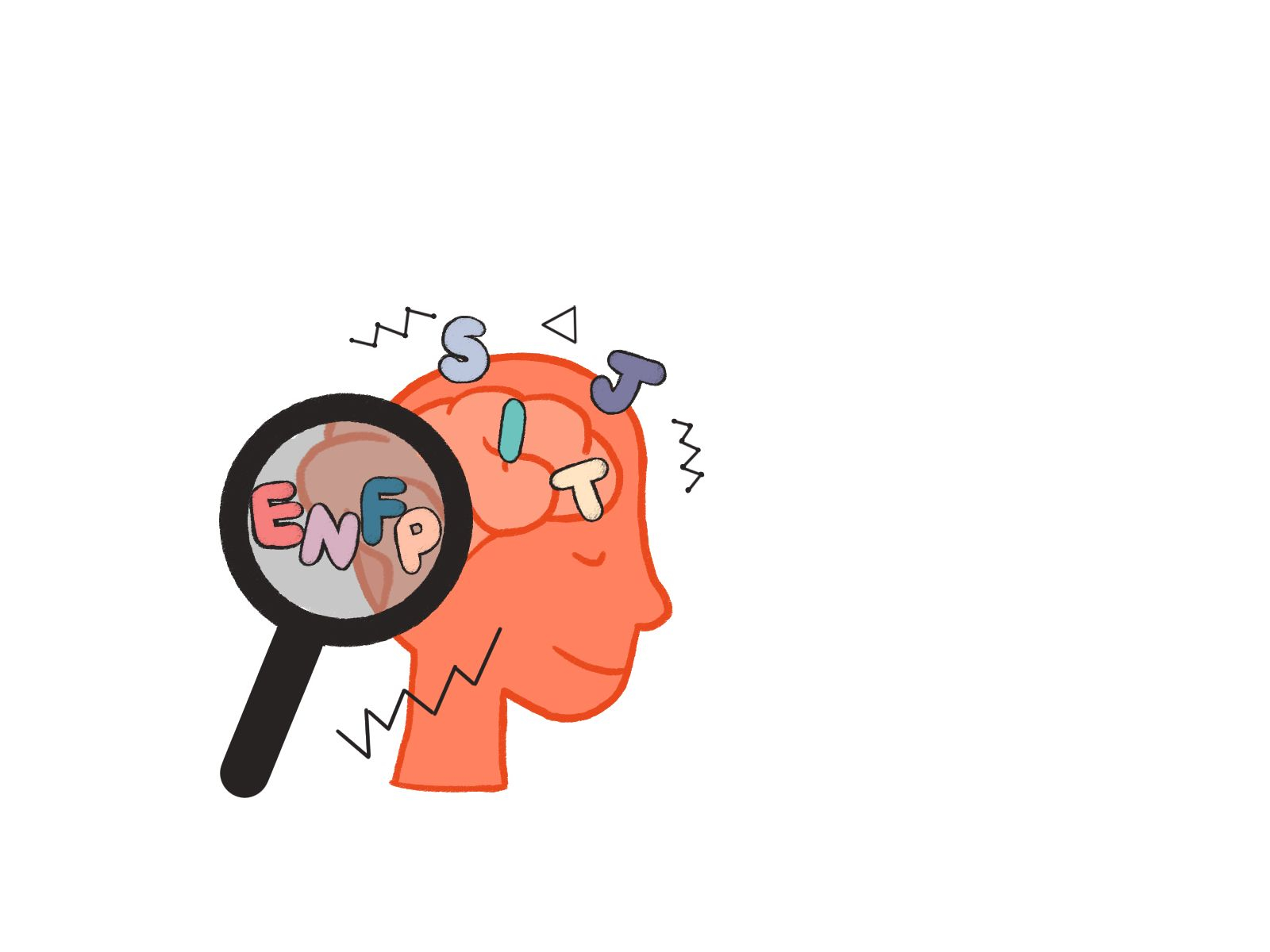 I am deeply and unapologetically obsessed with personality tests. I think it’s a combination of not really knowing what to do with myself but also needing the constant reassurance that I have a grasp on who I am. I’ve fallen in love with the 16 oddly charming Myers-Briggs Type Indicator (MBTI) cartoon figurines, even creating a spreadsheet with my friends’ MBTI types so that I could read up on them and mentally calculate who I was supposed to get along with. (The answer is the ISFP type, in case you’re curious.)

The MBTI test, frequently referred to as the most popular personality test, counts the CIA and U.S. Department of Defense amongst its 2 million users, even as The New York Times has compared it to BuzzFeed quizzes, suggesting that the test’s decade-long popularity has resulted from people simply wanting to take it. It almost feels like an insult to refer to the MBTI test as a BuzzFeed quiz — until I remember that I used to take those obsessively to figure out which Starbucks drink I was.

That being said, I don’t think MBTI tests should simply be dismissed as frivolous fun as they have proven to be particularly insightful for companies, with almost 90% of the Fortune 100 companies relying on such personality tests to build collaborative, strong and more effective teams within their organizations. When ethically used, these tests can help companies understand their employees’ strengths, weaknesses and the way they process information. By ethical use of the MBTI tests, I mean that companies should make them non-compulsory and merely encourage employees to share their MBTI types instead of forcing them to display it on their desks and within their Zoom usernames.

MBTI types are not meant to be accurate but are intended to be insightful, which is why they’re so valuable in workspaces and for self-reflection. They are valid, but they should by no means be necessarily used as a guide to determine your life, à la one of those “Choose Your Own Adventure” books, but with no redo. The MBTI tests are by no means exhaustive, but they are not without their purpose or benefit.

The airline JetBlue agrees, having implemented MBTI assessments as part of their leadership development program more than a decade ago to motivate employees to develop self-understanding and an understanding of others’ differences, as well as apply those skills to their actions and communications.

It’s vastly important to note that MBTI tests are not used as an end goal here to categorize employees into strict boxes and essentially keep them in storage if they are not extroverts. Instead, the MBTI tests are utilized to further propel employees, as former Bridgewater Associates employee Leah Fessler put it, to “[force] us to reconcile the gaps between what the test results tell us, and what we know to be true about ourselves.”

Much of the criticism directed at the MBTI tests stem from users getting different responses each time they take the test. This is perfectly understandable as the MBTI test sorts for preferences instead of solid traits, which can explain the varying test results. One could claim to be an extrovert but prefer to spend a lot of time alone, which could result in them receiving the introvert result at a later test date. I’ve always thought personality tests to be tricky, frequently wondering if I’m answering the questions based on how I want to be perceived by others or if I’m being true to myself.

In my MBTI spreadsheet, none of my friends are actually ISFPs, but I’m pretty sure we get along well. Pretty sure because I’m also afraid to ask and be questioned on why I’m keeping a running spreadsheet on everyone’s personality types. Either way, I’ll stick to the MBTI tests for a quick quarantine self-reflection.

Priscilla Goh thinks you should take a personality test and let her know your MBTI type so she can add it to her spreadsheet.

A version of this article appeared on pg. 12 of the November 12 print edition of the Daily Nexus.

Priscilla Goh
Priscilla Goh is an opinion staff writer and Philosophy major. She is a self pro-claimed coconut water connoisseur and spends the majority of her time waiting for a new Lorde album.