This year amidst the COVID-19 pandemic, UC Santa Barbara’s Associated Students program board moved its annual Halloween concert Delirium online and adapted it into a two-night entertainment fest. 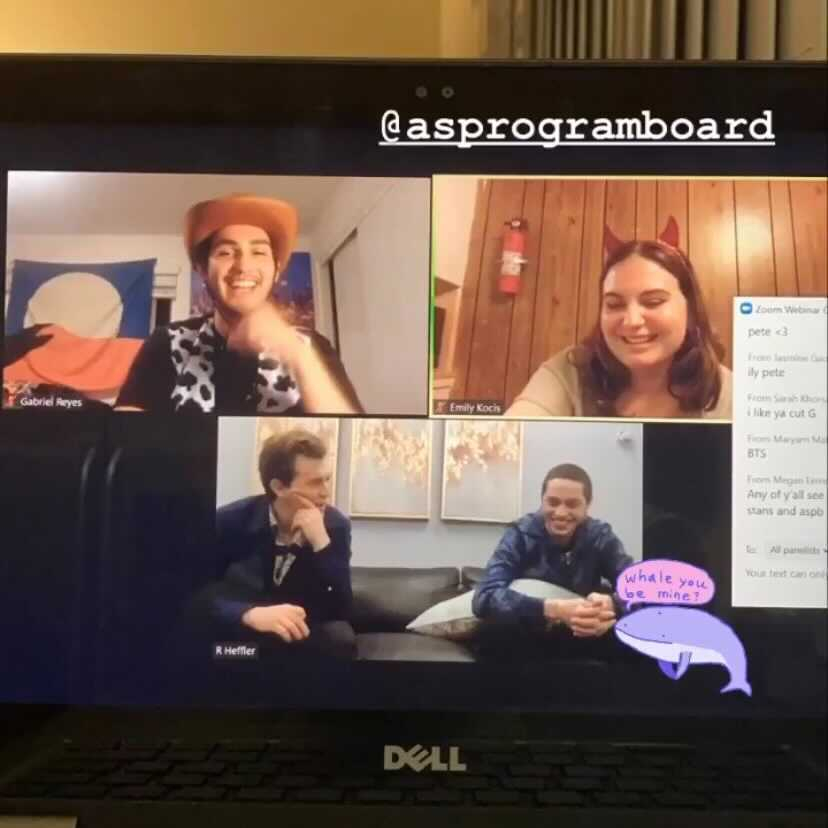 Delirium’s first night featured Saturday Night Live (SNL) cast members and comedians Pete Davidson and Alex Moffat, who spoke to students about their careers and their work on SNL. The Q&A was moderated by Associated Students (A.S.) Program Board members Gabriel Reyes and Emily Kocis, who presented a mix of prepared questions as well as questions posted by students.

The event started at 9:30 p.m. on Zoom, with Davidson and Moffat appearing on screen together from SNL’s headquarters in New York City. Davidson awkwardly greeted UCSB students with “Go raccoons!” – seemingly unaware that UCSB’s mascot is the Gaucho – before mentioning that they were on set at the moment getting ready to film for their upcoming Saturday night show.

The Zoom chat was initially flooded with comments and questions directed toward Davidson (“Pete, what are your girlfriend qualifications?” “Pete I’m single!”), including several inquiries regarding Davidson’s thoughts on ex-girlfriend Ariana Grande’s new album “Positions,” which had dropped the previous night. Despite attendees’ heightened interest in these topics, the moderators first asked Davidson and Moffat questions about what it was like to film SNL during the pandemic. Both said they are required to get tested for COVID-19 every day, along with the rest of the cast and crew, creating an SNL “bubble” of sorts.

Later in the conversation, Davidson and Moffat recounted their favorite SNL memories, including their favorite hosts. Davidson recollected that his favorite was comedian Bill Burr, while Moffat named Will Ferrell. In regards to staying in character for sketches, Davidson joked that he is “one of the worst live-sketch performers of all time” for never being able to keep a straight face or hold back his laughter.

Davidson went on to talk about how he got his start in comedy at a bowling alley next to a Wendy’s, where he admitted to “bombing” his first show. Moffat said he started off doing improv and sketch comedy in Chicago. While trying to break into the industry, one of the most eccentric jobs he held was “teaching speed reading seminars,” while Davidson’s early career pursuits included being a busboy and chauffeur. When Reyes and Kocis brought up Moffat’s background in musical theatre, Davidson and Moffat burst into a humorous rendition of Elton John’s “Rocket Man.”

The moderators followed this with a round of rapid-fire questions, such as the one thing each performer could not live without (Moffat responded crossword puzzles, while Davidson chose weed. Much to the delight of the Zoom chat, Davidson revealed that he prefers indica over sativa).

Another popular chat question was about Davidson’s and Moffat’s Starbucks orders: Davidson said he prefers a matcha latte, while Moffat said his go-to is a bag full of cake pops and black coffee. The two ended by deliberating on their career backup plans if comedy hadn’t worked out. Davidson said he would probably be “selling cocaine in Staten Island” while Moffat said he would have wanted to pursue his talent for speed-reading.

While night one of Delirium was certainly comical at points, some attendees in the chat expressed disappointment at the banal nature of some of the questions posed in the Q&A.

Night two took place on Halloween night, with rising Mexican-American musician Omar Apollo opening the musical show fresh off his album release of “Apolonio.” Apollo’s career initially took off after the release of his hit single “Ugotme,” and he has been making bedroom pop and R&B music ever since.

Apollo started the show in a studio room with his full band dressed up for Halloween. Wearing Halloween makeup and fangs, Apollo opened with “I’m Amazing,” a track from “Apolonio,” before taking audience suggestions for songs like “Unbothered,” during which he showed off his high vocal range, and others like “Bi Fren” and “Dos Uno Nueve (219).” Apollo also performed hit songs like “Kickback,” “Ashamed” and “Frío,” ending his set with “Trouble.”

Around 10 p.m., headlining act Gunna took the stage. The rapper has charted on Billboard since 2018 with heavy-hitting singles such as “Drip Too Hard” and “Close Friends.” His latest album, “WUNNA,” was released earlier this year and featured collaborations with Lil Uzi Vert, Travis Scott, Future, Young Thug and more.

The rapper’s stage design and colorful visuals were impressive considering the virtual medium. He opened with “Argentina” and had high energy throughout his set, often shouting out UCSB in between songs and performing fan favorites like “Lemonade,” “Drip Too Hard,” “Street Sweeper” and “Feigning.” The set concluded around 11 p.m., with the virtual audience seeming pleased with Gunna’s overall performance.

Despite the unconventional venue of this year’s Delirium concert, A.S. Program Board succeeded in delivering in-demand acts, intensifying crowd engagement and conducting several anticipatory giveaways at the end of each segment. The ability to experience the annual Halloween event together and be as cringe as ever on a Zoom chat brought some much-needed solace and entertainment to UCSB students who were watching from home.

A version of this article appeared on pg. 8 of the November 12 print edition of the Daily Nexus.