The Daily Nexus
News
In the Driver’s Seat: Prop 22 May Have Consequences for I.V. Gig Workers
November 1, 2020 at 8:55 pm by Atmika Iyer and Skye Schoenhoeft

In September 2019, California passed Assembly Bill 5, a landmark decision that required gig-companies such as Uber, Lyft and DoorDash to classify their drivers as either part-time or full-time employees and to provide them with the benefits as such. 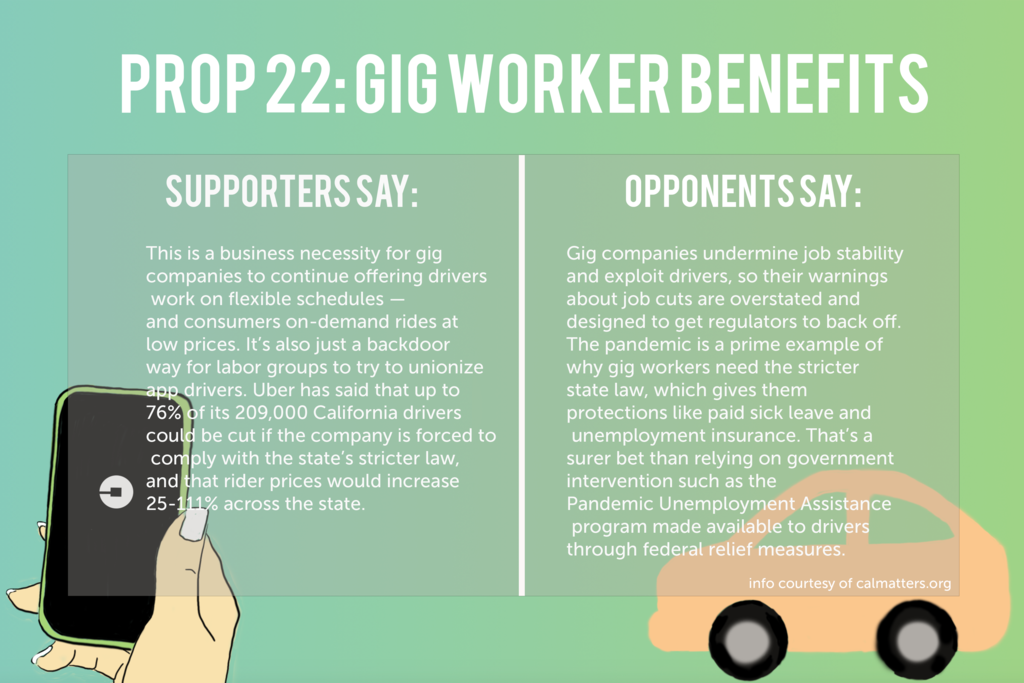 Now, 1 year and 2 months later, Proposition 22, which is supported by Uber, Lyft, DoorDash, Postmates and Instacart, seeks to undo Assembly Bill 5 by adding on new benefits for drivers while keeping them classified as independent contractors. Should Californians vote in favor of Prop 22, drivers will not receive benefits like wage and worker protections guaranteed under the previous bill, according to the Guardian.

Those campaigning for No on Prop 22, however, argue that the increased benefits do not go far enough to address concerns about drivers’ rights as workers and that drivers should be classified as employees.

Now, as the future of ridesharing apps is on the California ballot, students in Isla Vista working for rideshare and delivery companies spoke to the Nexus about how Proposition 22 would affect them.

“I found that it was kind of hard to sign up for consistent hours because especially during COVID, the market was really flooded with people driving, so you would have to sign up like a full week in advance to guarantee that you’d be able to work,” second-year history major Katie Caracciolo, a former DoorDash driver, said; she does not support Prop 22.

Outside of the pandemic, many students turn to DoorDash as a way to make money on the side. However, under current circumstances, it was one of few jobs to work during the pandemic, according to Caracciolo.

“I was trying to get a job just to earn some extra money for groceries and everything once I moved back down here. And nowhere was really hiring, or I wasn’t getting a lot of response from the applications I put out. So, one of my mom’s friends recommended that I tried DoorDash,” she said.

“It was super easy; they just did a background check. And I started driving like the next day… It was like the only job I could actually get at the time,” Caracciolo continued.

Logan Zook, a former lifeguard and second-year Santa Barbara City College mechanical engineering major who has lived in I.V. for two years, said he also faced a lack of work opportunities, turning to DoorDash over this summer.

“They weren’t opening the pools so my jobs fell through. I had to make money so I decided ‘Why not just download this app?’” Zook said. He no longer works with the company, and when asked about his experience, Zook said he had mixed reviews.

“[Working with DoorDash] was fine. It was easy to be your own boss but it’s a lot harder to [be] motivated to go to work and make money,” Zook said. “It’s more of a hobby than an obligation. Which is a bad way to look at it but that’s what happened to me. It’s harder to stay motivated.”

“It is tough to have a company that’s so withdrawn from its employees, or independent contractors; it’s hard to seek help for certain things,” he continued. “It’s weird to have to call customer service to get help with your job.”

Zook currently has no stance on Prop 22, but said he was unsure about the protections Proposition 22 would provide if passed.

“The one thing that made me stop doing DoorDash was that I would have to go on the highway a lot when I was working in Mill Valley and I was scared that if I got into a crash, I wouldn’t be covered,” Zook said. “It really turned me away from it.”

“There was never really a guarantee that you would have work and the main thing I guess was the wages, like I would keep a constant tally of how much I was making per hour, versus minimum wage, but it was always below minimum wage without fail,” Caracciolo said.

In contrast, first-year pre-communication major Camden Blumberg, a former Postmates and DoorDash driver, said he consistently made above minimum wage in his home state of Connecticut, where he was considered an independent contractor, before coming to UC Santa Barbara.

“From my experience, just being like a baseline driver made significantly more than minimum wage. I had no trouble, basically driving as much as I wanted, as long as I planned it out ahead of time,” Blumberg said.

Blumberg ultimately said he’d advocate for whichever worker classification paid more. Blumberg said he also preferred the responsibilities of an independent contractor to those of an employee.

“What’s most appealing is I don’t have to answer to anyone. I’m not expected to do anything,” Blumberg said. “I still felt like the company was present, but I didn’t feel like I was beholden to them.”

Correction [11/03/2020, 01:05 a.m.]: A previous version of this article contained a graphic with information pertaining to Proposition 21, not Proposition 22, and has been updated with the correct information.