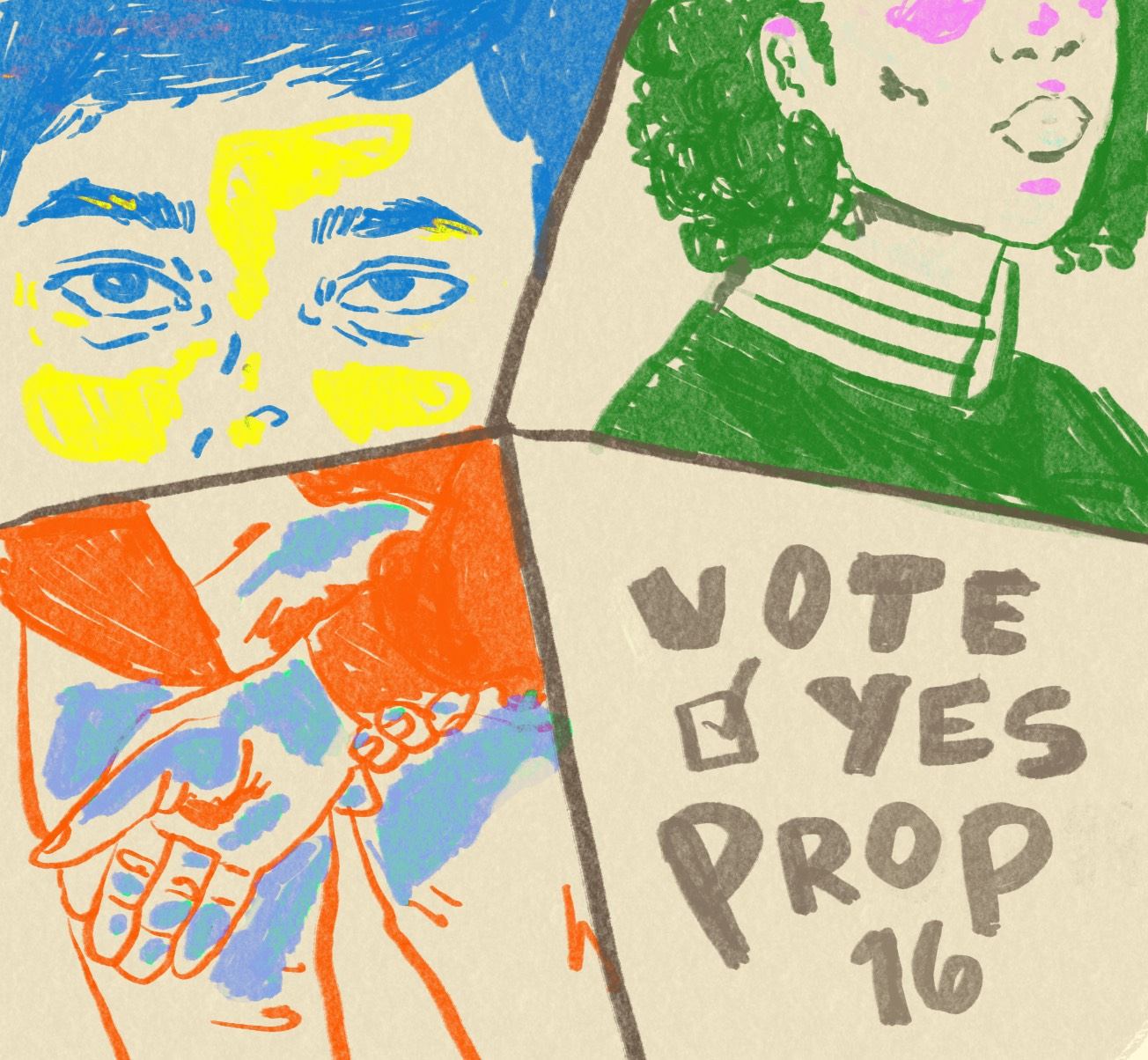 Prop 16’s implementation of affirmative action is a concrete step towards addressing the consequences of structural racism and sexism. Everyone deserves an equal shot at good jobs, fair wages and quality schools, which is not currently the case. White women in California still earn about 80 cents to the dollar compared to the earnings of white men, and the number is even lower for women of color, who face further discrimination in hiring, employment and education. With Black, Latinx and Native American people disproportionately impacted by COVID-19 in California, the devastating consequences of decades of discrimination are more evident than ever. With California being only one of nine states that maintains a ban on affirmative action, we need to get California back on track with the rest of the country’s progress.

There is a lot of misinformation being spread regarding Prop 16 that is based on misunderstandings of data and affirmative action as a whole. Firstly, many people opposed to the proposition argue that making colorblind decisions, not taking race or ethnic background into account, would be the fairest. And while this is seemingly a logical argument, colorblind decisions actually hurt minorities who are systemically disadvantaged.

For example, Proposition 209 led to a drastic drop in diversity the year after it was enacted. At UC Berkeley, students from underrepresented groups were 31% less likely to be admitted as compared to admissions prior to Prop 209. Contrary to popular belief, affirmative action does not allow for unqualified applicants to be selected over qualified ones. In fact, this is already prohibited by federal regulations.

Prop 16 would allow for race and gender as contributing factors in decision-making when considering similarly qualified applicants. For example, when deciding between competitive  applicants in a workplace where minorities are scarce, Prop 16 would encourage an employer to hire someone from a historically discriminated-against group.

Another common concern is that affirmative action penalizes Asian Americans. This argument is largely based on the misinterpretation of a single study conducted by Thomas J. Espenshade, a sociologist at Princeton University. He himself actually stated in an interview that his research does not show a bias against Asian Americans because it did not have access to softer variables, such as extracurricular activities, recommendation letters and essays. The study did not look at a holistic review of the application process, but rather isolated test scores and GPA, which is unlike the actual admissions process.

Affirmative action is a step towards a new “American Dream” that isn’t entrenched in systemic inequality and inaccessibility.

One of the most common themes among opposers of Prop 16 is that if people work hard enough, they can achieve anything. The issue with the “American Dream” narrative is that it blames marginalized people for the system’s failure to provide them with equal opportunity and basic needs access. Marginalized communities work just as hard as other communities, but they aren’t given the same opportunities. Higher education is vital in escaping poverty, yet higher education is mostly inaccessible to these communities. Affirmative action is a step towards a new “American Dream” that isn’t entrenched in systemic inequality and inaccessibility.

For example, 43% of white admits to Harvard are either athletes, legacies or children of top donors. 27% of white students Harvard admits are “special cases” e.g. legacies and top donors. Only 26% of that 43% would likely even be admissible at all based on their grades. The percentage for these special admits drops down to below 16% for Black, Latinx and Asian racial categories. No other demographic has nearly this many special cases. Low-income white students aren’t fighting against people of color, but against the classist structure.

The concept of differentiating people by their background, race, gender and ethnicity is a large cause of hesitation for some people, which is understandable. Many argue that discrimination can’t be cured with more discrimination; however, it is important to understand the different types of discrimination and the motivation behind each. The discrimination that is used to exclude a group due to prejudice differs from the definition of discrimination in affirmative action, which works to undo the prejudiced exclusion through inclusion. Increasing efforts of inclusion is the most effective way to combat exclusion.

This is the same logic as treating a health deficiency with vitamin supplements. For someone who is healthy, high doses of supplements are not necessary and even harmful, but for someone with an unbalanced system, the supplements can restore balance.

If we lived in an even playing field, this wouldn’t unnecessary, but because our system is unbalanced, affirmative action is needed to counteract this discrimination. To reiterate, California is only one of nine states that are lagging on affirmative action due to the influence of corporate interests. Prop 16 is our chance to change that.

UCSB Know Your Props urges you to stay educated and vote Yes on Prop 16.

UCSB Know Your Props
UCSB Know Your Props is an independent student organized coalition dedicated to getting out the vote for propositions and other ballot measures on the November 2020 ballot. They are made up of student leaders from various organizations such as the UCSB chapter of the Young Democratic Socialists of America, the External Vice Presidents’ Offices and Gauchos for Transparency.

This is just a soft defacto quota equivalent to redlining that used race as “one of many factors” when granting home loans. The only way to create racial equity is to cull the Asian population in UCs by over 50%, or all Asians will have to work twice as hard as other races to have the same chances of getting in because they are born with yellow skin. Its simple racial bullying where all races gang up against Asians.

If you vote for prop 16 you are voting to deny equal rights to your fellow citizens; you are voting to repeal the California Civil Rights Initiative. At what age should we start telling our children about their ‘racial group” and how they will be treated differently by state institutions based on the color of their skin? Is this the state in which you want to live? #prop16isracism ” The state shall not discriminate against, or grant preferential treatment to, any individual or group on the basis of race, sex, color, ethnicity, or national origin in the operation of public… Read more »

affirmative action does not repeal the civil rights initiative, nor the 14th amendment. it already exists in most states. discrimination against minorities and people color exists, you cannot deny that, and this is a step in the right direction to even the playing field. studies have been done to show that the impact on white people is severely slim to none, if thats what you’re worried about. do your research before you spew nonsense please

You could not be more wrong. Read the ballot measure, not the soft disingenuous language that the race hustlers wrap around it. It repeals the California Civil Rights Initiative.

But did isn’t put into constitution but equal protection is. The definition of equal protection is gonna change after the SCOTUS has a new member. Such a ridiculous thing as AA should never have survived the court. It is always a 5-4 and now its gonna be a 6-3 or a 5-4 depends on Gorsuch.

Yeah, it’s probably gonna pass but now I just wish with Amy Coney Barret, SCOTUS can strike the entire Affirmative Action down as unconstitutional under 14th Amendment with SFFA V Harvard for not just public but private uni who receives fed and state money. Let’s see so Barret, Roberts, Alito, Thomas, Kavanaugh all had dissent against AA and Gorsuch is a swing. Justice Roberts, Justice Kavanaugh don’t disappoint me with the stare decisis thing, please!!! So Dems can stop this divisive shit once and for all. They can’t even reverse it after if one-day libs take back the court since… Read more »