The Daily Nexus
News
Back on the Same Wavelength: KCSB Alumni Return To Host Radio Shows From Around the World
September 3, 2020 at 10:58 am by Mariam Bagdady

When the coronavirus pandemic forced UC Santa Barbara’s KCSB-FM to move its operations online in late March, the show didn’t stop. In fact, it got more creative. Former students — now DJs and producers from all over the world — are tuning in to support the show and host radio programs, brought together by the common cause to help the college radio station of their past. 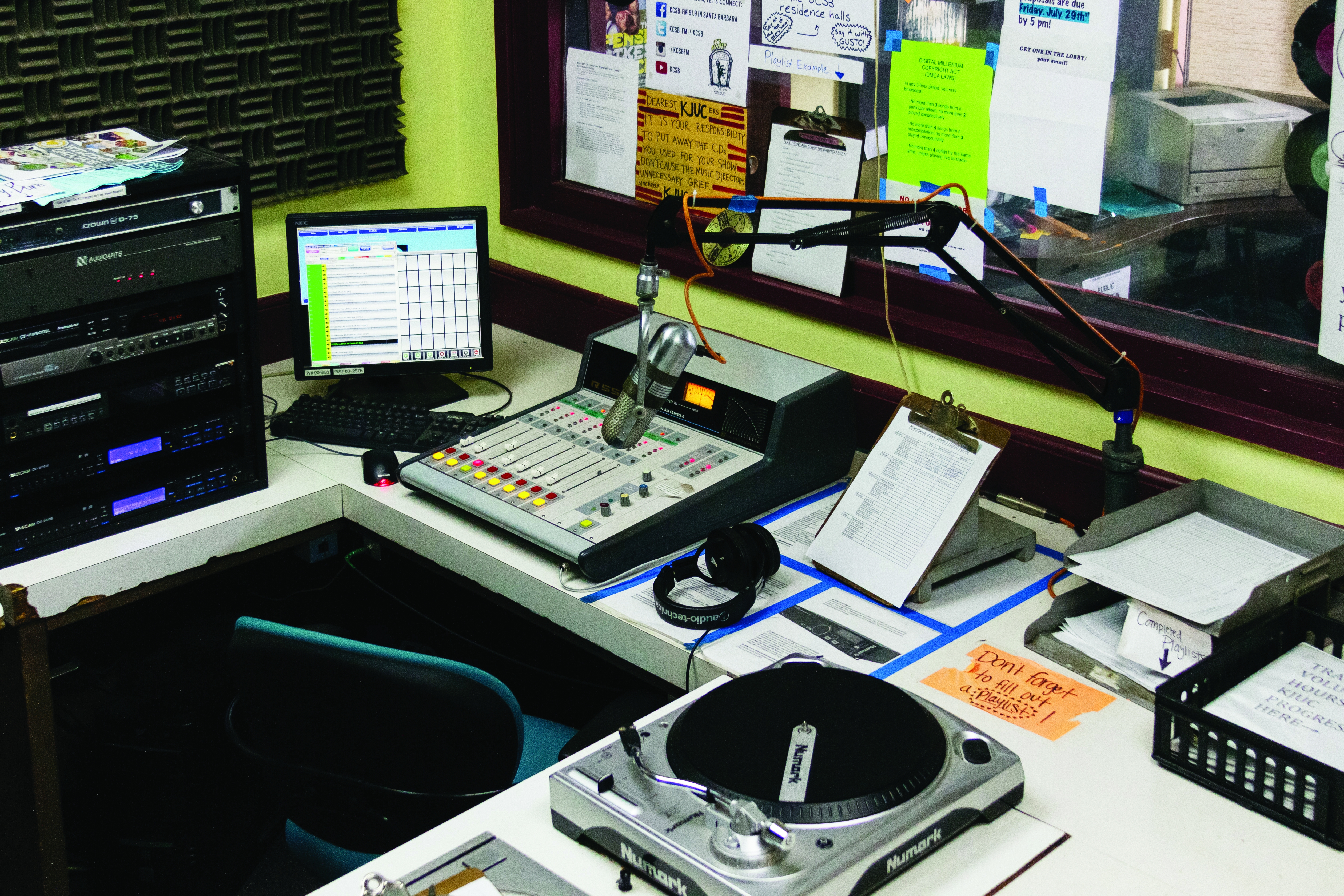 Former students — now DJs and producers from all over the world — are tuning in to support the show and host radio programs, brought together by the common cause to help the college radio station of their past. Hari Patel / Daily Nexus

From Peru to Japan, from New York to the beaches of Santa Barbara, UCSB alumni are working around the clock to ensure their cherished community radio station stays on-air, according to Ted Coe, the current staff advisor for the station.

More than 23 alumni programmers rejoined the KCSB team at the end of June with new and updated programs that reminisce on shows going as far back as the 1980s, according to a press release from KCSB. The throwback programs include “Smooooothe Beatzzz,” a jazz music show, and “reDISCOvery,” an electronic and funk music mix.

KCSB has not only revived old shows but has welcomed an array of new programs as well, including the “KCSB Sample Platter,” a new addition that provides a taste of two shows every Friday, including those of alumni, according to Coe.

Jesse Fuller ‘03 is one of the many to make a comeback. Fuller revived his old show “Itadakimasu” — a program showcasing different genres of Japanese music, including his newest addition of classical music.

Fuller currently lives in the Gunma prefecture of Japan, where he works as an IT infrastructure engineer and networker. He said that being across the Pacfic Ocean and “getting connected [back]” with his KCSB family has been enriching, but a little strange after his 17-year hiatus.

“I’m super happy to help out and fill up some spots while it’s necessary,” Fuller said. “It’s definitely a weird thing to go on [after] all these years, and especially as we all have moved around the world.”

Many of Fuller’s college friends have rejoined the broadcast, turning a pandemic-driven improvisation into a virtual, on-air Gaucho reunion amongst the various graduating classes.

Bryan Brown ’99, a network engineer in New York, returned to the KCSB radio scene after spending eleven years as KCSB’s chief engineer. His show, “The Return of CoolMojo,” streams from Long Island and features “a lot of live and not-so-mainstream jazz,” with a selection of other music from genres such as R&B and soul.

Brown said that his return to the station and his show felt like a homecoming after being away for seven years.

“When I left, it was sort of like leaving home again. It had been a big part of my life for a very long time, and so to be able to come back and then to see people I hadn’t spoken to or whose names hadn’t crossed my mind in years was really neat,” Brown said.

Maiya Evans ‘05, a lecturer in the Department of Health Education at San Francisco State University, had similar feelings about coming back to KCSB. She’s hosting the “Hey Girl Health Show,” a new program on KCSB that examines health topics affecting women of color.

“You kind of leave school, you go off and you have your life, but so much of who I am or really so much of my leadership came from what I did at KCSB,” Evans said. “It’s almost like going back to my hometown. It’s a real sense of nostalgia for me.”

Her show uniquely expands beyond what KCSB’s audience is accustomed to hearing from the radio station, focusing on current events and culture rather than music, she said.

Evans explained that her show, along with other alumni programming, is a way to showcase content that is not usually included at KCSB and is a way to represent new shows in programming that don’t focus on music.

“I’m not sure if anybody is talking about women of color and health in Santa Barbara,” Evans said. “It’s just a different voice that folks will get to hear… I feel like having that kind of voice in Santa Barbara and in the community is very important.”

While alumni said they were happy to be back with new and updated programming during the pandemic, their summer programming is a temporary fix to the ongoing recruiting shortage until new college students can join the team in the fall.

“That time in your life, it doesn’t leave,” Fuller said. “I would gladly give up my seat at any moment for somebody who’s local. I would hate to take their spot.”

Despite the temporary programming, current KCSB staff see this summer as a launchpad for helping student members network to form long-term connections with radio industry professionals, according to Coe.

Coe mentioned the possibility of continuing alumni-hosted programs as a regular feature on KCSB due to the addition of perspectives and content that was not covered on the show before.

“They have a focus that is serving other parts of our community,” Coe explained.

Student General Manager Emma Mesches, a biology major graduating with the class of 2021, had a similar outlook when it came to immortalizing the alumni programming.

“We’re going to definitely have alumni with shows because they’re producing super cool content that we wouldn’t have. We can’t really do the recruitment we usually would… so it’s been really nice having these alumni,” she said.

With the combination of current students joining KCSB during fall recruitment and alumni joining the station for the summer, KCSB is making steps to diversify its programming into the future, according to Coe.

“The diversity of the station adds to the diversity of programming, and then you add to that that people are coming from outside of Santa Barbara and they’re bringing in their flavor,” Evans said.

“It just makes this [the] eclectic mix that KCSB has always been about.”