As the nation clocks in six months of lockdown, many college students have suddenly found themselves with an unprecedented amount of spare time on their hands. For some, including Nicholas Cerofeci, a second-year College of Creative Studies writing and literature major, this seemingly endless quarantine has been the perfect time to turn budding entrepreneurial ideas into reality. 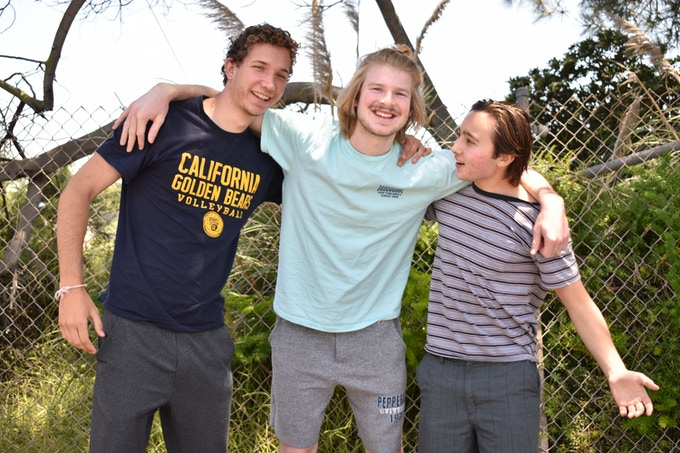 From left to right: Matthew Dull, Sam Nicholson and Nick Cerofeci, co-founders of the Paddle app. Courtesy of Nicholas Cerofeci

Along with his childhood friends and fellow college students Sam Nicholson and Matthew Dull — who attend Pepperdine University and UC Berkeley, respectively — Cerofeci has been working on developing a music and social media hybrid app called Paddle.

“The idea of Paddle is to combine music streaming services with social media — if Spotify combined with Instagram, and instead of sharing your pictures, you’d be able to share songs and albums and artists that you enjoy with your friends. You’d be able to stream [the music] right there on the app as well,” Cerofeci said.

Over a phone interview, Cerofeci said that the concept behind the app came naturally to him and his friends, all of whom are avid music lovers. With free time to spare, the trio looked into the logistics of their project and decided that they wanted to try something new. Much more difficult than brainstorming the initial concept, however, was coming up with a name for the app. “We had the idea long before we ever had the name,” Cerofeci revealed.

“Me and my friend Sam were sitting in his living room and we were just making noises to figure out what we wanted the name to be. Just spitting out random ideas and nothing was coming to us.” They decided to go with an arbitrary name — Paddle.

The three friends are working with Algoworks, a mobile app design company, to create a beta version of Paddle with funding they have received through their Kickstarter campaign.

“We have a basic layout of what the frames are going to be and what a lot of the pages are going to look like, but we’re trying to take it slow and make sure that we get the vision that we really want instead of going straight to the final product,” Cerofeci explained. While he hopes to have an early version of Paddle available to download on the app store within the next six months, Cerofeci emphasizes that he and his partners prioritize the quality of the app over timeliness.

Facebook, arguably the most revolutionary social networking service of the century, was started on a college campus, similar to several other social media companies that boast millions of daily users. Cerofeci and his partners plan to use a similar strategy to launch Paddle, taking into account the aspects of social media that college students gravitate toward. Nicholson and Dull will introduce the app on their own college campuses, while Cerofeci intends to promote the app among students at UCSB.

“Everyone uses Spotify or Apple Music, and almost everyone uses Instagram, so we know that those are two things that college kids are into. They are our primary demographic as of now, but we do plan to take Paddle to a further audience and really expand on it.”

As is the case with most startups, the process of developing and launching Paddle has not been without its challenges.

“We’re just college kids trying to learn how to start a business. Even the semantics of figuring out the legality of this or that is very complicated, a lot more complicated than I thought,” Cerofeci admitted. He said that he and his partners “kind of started going for it,” and that they adapted to find solutions for any problems that arose. He hopes that the momentum they have started to build will allow them to navigate any future development issues.

Cerofeci is optimistic about Paddle’s place in the perpetually growing realm of social media, music-streaming services and consumer-friendly technology.

“The key to Paddle is that there is nothing like it. You have your streaming services and you have texting and you have all those separate platforms, but there is nothing that combines all of them into one. We believe that music is going in that direction, and digital media and social media are also going in that same direction, so we tried to jump ahead of the curve.”

Now, in the early stages of the app, Paddle is simply a project that Cerofeci and his partners are passionate about and that keeps them occupied at home. Nonetheless, Cerofeci has given some thought to his future goals and said he may consider pursuing a career in the music industry. “As a writing and literature major, the entertainment industry is the place to be. If something like Paddle can help me get my foot in the door, then that’s worth it.”