The Daily Nexus
Music
In Review: “Karma 3” Showcases Dave East’s Consistency and Grit
August 29, 2020 at 12:52 am by Jadon Bienz and Evan Gonzalez 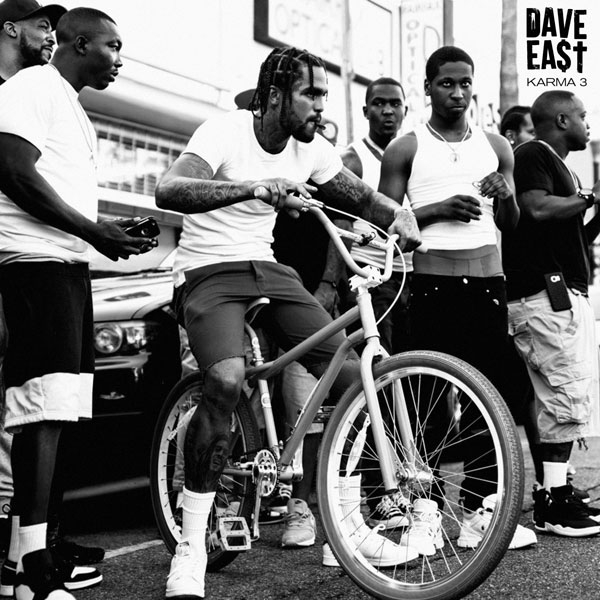 Dave East is a perfect example of the modern multi-talented rap artist. Growing up in Harlem, he became a prospective basketball prodigy in high school alongside now-NBA superstar Kevin Durant, which he references on his song “KD.” East’s college basketball career was not fruitful, and after he dropped out, he was incarcerated for six months. His release from prison prompted his transition to rapping and acting, including his portrayal as the Method Man on Hulu’s “Wu-Tang: An American Saga.” In recent years, East has primarily attracted recognition as a rapper. In 2014, East signed with Nas’s Mass Appeal Records, and in 2016, he was selected as part of XXL’s freshman class. His music catalogs the plethora of his experiences, with his latest album, “Karma 3,” exploring his new life of luxury as redemption from his past.

The album’s title highlights the fact that East believes he will reap what he sows — trauma and growth. Although he has come a long way in his career, his heart remains rooted in his upbringing; the album cover art features a grayscale photo of him and his friends. The third installment in East’s “Karma” series, the album emphasizes his personal and artistic growth from his previous projects. In comparison to East’s earlier discography, “Karma 3” features far fewer R&B-inspired cuts. Instead, the tracks focus on his raw lyricism and storytelling. His voice and delivery are highly memorable as well — a smooth yet assertive mix of A$AP Ferg and Nipsey Hussle.

East is known for his juxtaposition of old school techniques over modern trap-inspired instrumentals. The album’s production remains fairly formulaic: dense 808s, sharp hi-hats and a melodic sample form the basis of every track. However, the sampling pulls from many different genres, which prevents the tracks from sounding homogenous. “Thank God,” one of the most satisfying tracks, features a creeping piano tune, while “Mission” roams into R&B space with its bouncier 808s and backing vocals.

Among the most sonically notable moments on “Karma 3” are the vocal features. On “The City,” Trey Songz interpolates the hook to Jay-Z’s classic come-up track “Heart of the City,” and East’s gruff bars contrast well with Songz’s higher falsetto. The prolific Mary J. Blige’s dramatic vocal performance on “Know How I Feel” is a stylistic throwback to the old-school New York rap that East draws inspiration from.

Unlike Jay-Z, however, East highlights the dangers of his old life rather than just glorify the struggle. He laments the death of Los Angeles rapper and philanthropist Hussle multiple times on the album, and he still finds himself dwelling on his past, admitting, “I’m traumatized, just look in my eyes, I need therapy,” on “Believe It Or Not.” These flashbacks appear in his music as well. On “Said What I Said,” East admits, “I see my homie that died when I look in the sky,” while on “Know How I Feel,” he recalls, “My man got life … They think this money make it all good, how?”

East also spends plenty of time showing off the lavishness of his present life. Bars such as “It look like I’m chokin’ my Patek ’cause [it’s] blue in the face” on the track “Menace” showcase the dark sense of humor he has developed as a result of his experiences. “Mission” has East portraying his current life of luxury and fame, from staying at a Four Seasons hotel to being surrounded by paparazzi, as a reward for his previous ambition. In regards to his future, East notes, “Rappin’ and actin’, I’m just tryna keep up with Pac,” on “Believe It Or Not.”

Though East’s narratives and diverse flows are engaging, there are a handful of moments that make the album a rather difficult listen, especially those with featured artists. Popcaan, a familiar voice for those who enjoy Drake’s “If You’re Reading This It’s Too Late,” phones in with a repetitive feature on “Unruly.” Bino Rideaux’s use of autotune on “Blue Story” is a crutch for poor singing instead of an instrumental tool, which makes the verse sound like that of an overzealous and underskilled Lil Baby. Many of the other features are less engaging than East’s own performance, leaving the songs less satisfactory than they could have been.

“Karma 3” also suffers from overambition at times. Despite being highly memorable, “The City” borders on messiness due to an amalgamation of retro-style rapping, trap drums, R&B singing and an undermixed sample. The cinematic feel of “Stone Killer” is overdone, as if the producer forced a generic trap beat onto an actual cinema score.

East’s consistency ultimately makes his latest project a solid endeavor, though his collaborators’ contributions punch above their weights. Four years after their XXL freshman nominations, East and his fellow classmates have not fallen into the creative slump that plagues so many freshman nominees. East proves himself capable of balancing his many talents as he continues to work his way up in life, improving his musical craft en route.