The brainchild of third-year anthropology major Gabriella Campbell, “That Anthro Podcast” began with the release of its first episode in July, featuring Amy Anderson, a graduate student in UC Santa Barbara’s Department of Anthropology. Anderson, who studies disease ecology and is affiliated with the Tsimane Health and Life History Project, spoke regarding both her current research as well as past experiences performing undergraduate fieldwork in Astypalaia, Greece.

Since then, five more episodes of the series have been released. Campbell and her guests have already covered a remarkably diverse array of topics in anthropology and the anthropological sciences, ranging from such seemingly disparate subjects as the role of forensics in bioarchaeology and studies of land use in ecological anthropology. 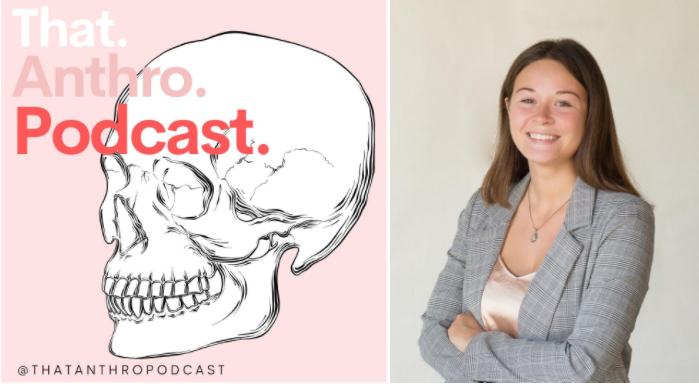 The idea first came to Campbell while she was attending a class with Assistant Professor Danielle Kurin in early May, wherein she and her peers presented research case studies on a variety of topics in anthropology.

“When it was over I was like ‘Why does this class have to end? I wish we could just talk about all this cool research all summer.’ I realized that if I really wanted that I could create it myself,” Campbell said.

Soon after, Campbell set out to continue the conversation by creating her own anthropology podcast, enlisting the help of Kurin to jump-start the project.

“The goal is to create a larger discussion around various topics, particularly important or hot topics, that new research that’s coming up in the field and what it can do for our future in science.”

Campbell has spoken with UCSB anthropology graduate student MacKenzie Wade, for instance. Wade is an expert in edible insects, studying the sustainability of them. She possesses a particular affinity for the subject — enough so that she raised insects and learned how to cook them while living in a Kansas State University dorm room.

“Culturally in the north we have more of an aversion to them. Whereas, you know, in the southern hemisphere, two billion people eat insects, like regularly, as a staple in their diet,” Campbell said.

“Here it’s a big cultural taboo. I even went out to the store to buy some edible insects so that I could kind of add my own opinions to the podcast.”

Associate Professor Jeffrey Hoelle is another anthropologist at UCSB who Campbell has spoken to in the podcast. Hoelle is engaged in a decidedly different subject of research than Wade: He studies cattle culture in Acre, Brazil, a region deep in western Amazonia.

“[Hoelle has] done a lot of work in the Amazon with local cattle grazing in the population and how that connects to their use of the Amazon and land use,” Campbell said.

Beyond his work in the Amazon, Hoelle also involves himself with the local community, managing the Isla Vista Ethnobotany Project as well as Cultivating Socio-ecological Communities, a project aiming to “facilitate deeper forms of engagement with the environment” in I.V. through education into local history, culture and ecology.

Then, there are episodes with those like Megan Kenner, a recent biological anthropology graduate of UCSB researching the CPT1A arctic variant, a fatty acid oxidation disorder observed in Native Alaskan populations.

The breadth of topics in anthropology covered demonstrate another intention of Campbell’s in creating “That Anthro Podcast:” to educate others on what anthropology means to begin with —and bring attention to the many subfields which have a home in the remarkably interdisciplinary subject. After all, the subject of human beings is a complicated one.

“Anthropology is very science based, and I think only until you’re in the field is when you realize that,” Campbell said.

“By exploring all of these different subfields that people might not even know exists within this very wide-ranging subject of anthropology, we can kind of explore all the nuance of it and hopefully share more of it with the public.”

However, “That Anth Podcast” goes beyond research and results. It also delves into the lives of anthropologists, their unique experiences in the field or in the lab and their individual reasons for doing what they do.

“Something I’m really interested in is what motivates the science,” Campbell said. “What’s motivating these researchers, what’s inspiring them? What questions are they asking?”

“When you look at an author credit on a research article, you see the name but you don’t know anything about the author other than that their name is attached to an article. I think going beyond that and finding the people behind the science is really important.”

Although the podcast was born in the midst of a pandemic, Campbell is planning to make the series a long-term commitment, and is already eyeing post-COVID production.

“I’d love to have two microphones in a room and sit down and have it be in person. I think you can get into a lot deeper, more meaningful conversation because it feels like you’re just talking to someone and you forget that you’re being recorded,” Campbell said. “This can be a little intimidating over the phone I found. It’s a little cold.”

“I just want to shine a spotlight on the cool people here and show how much amazing research comes out of the department. We’re one of the top departments in the country. No one talks about it, and I think we should be.”