The Daily Nexus
Photo
In Photos | Graduating Apart Together
August 7, 2020 at 5:24 pm by Sicheng Wang

Graduation used to be a well-defined milestone in one’s life, with Chancellor Yang’s speech, the turning of the tassel and cheers from friends and family — all packed in one day on the lagoon lawn. The coronavirus has, however, rendered the threshold between college and the next step in one’s life blurred: The commencement speech could be viewed for a month after the end of the quarter, and one could have (and most likely) watched it on the same spot where they had Zoom lectures for spring quarter. As the pandemic forced a change in how to mark one’s graduation, the class of 2020 has been creative in the way it said farewell to college. Over the past months, we have collected photos that documented graduation under the special circumstance, from taking graduation photos on a nearly deserted campus to a makeshift graduation ceremony with friends. 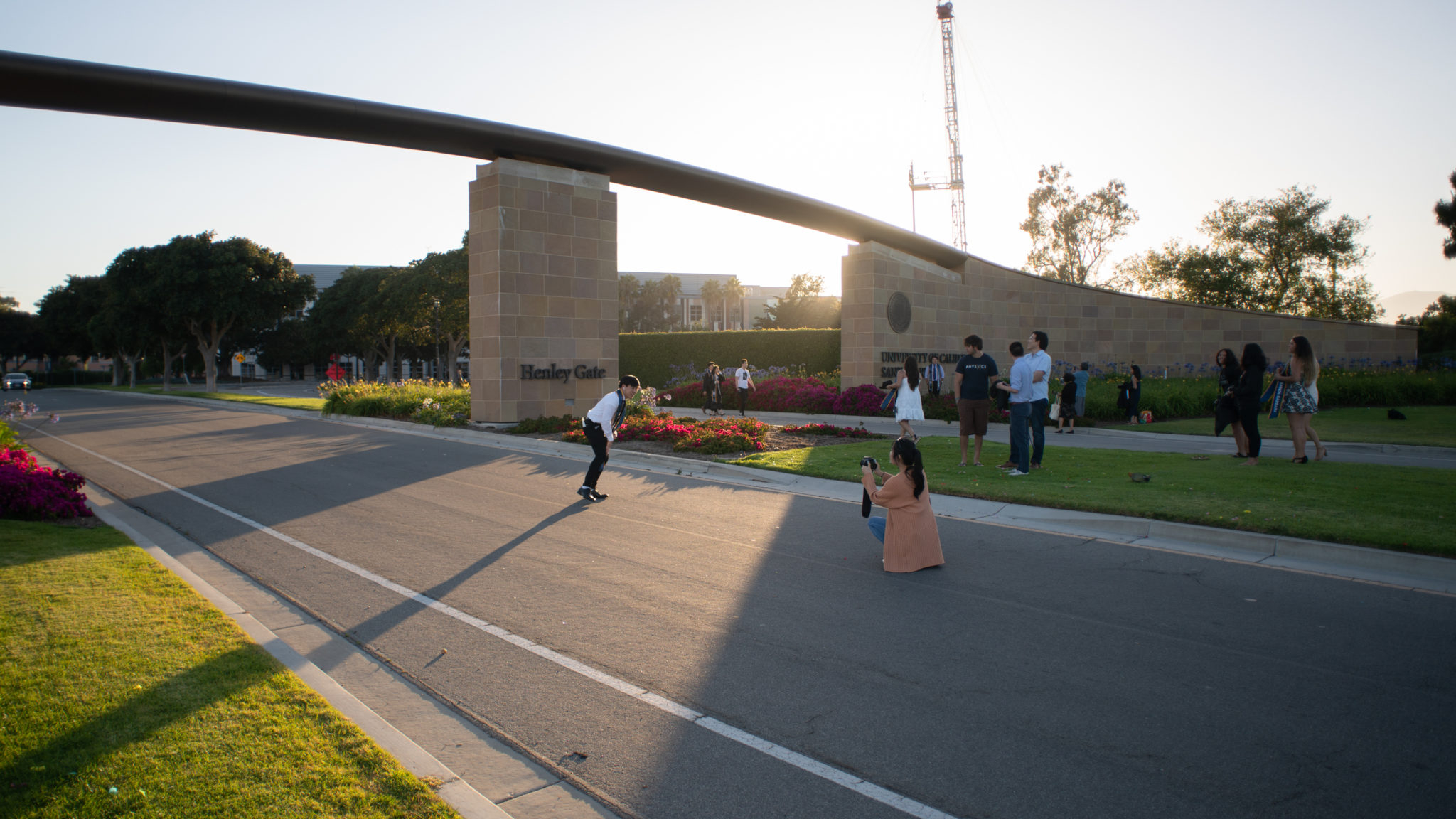 Henley Gate attracted groups — perhaps among the largest one could find on campus — for graduation photos. (Sicheng Wang / Daily Nexus) 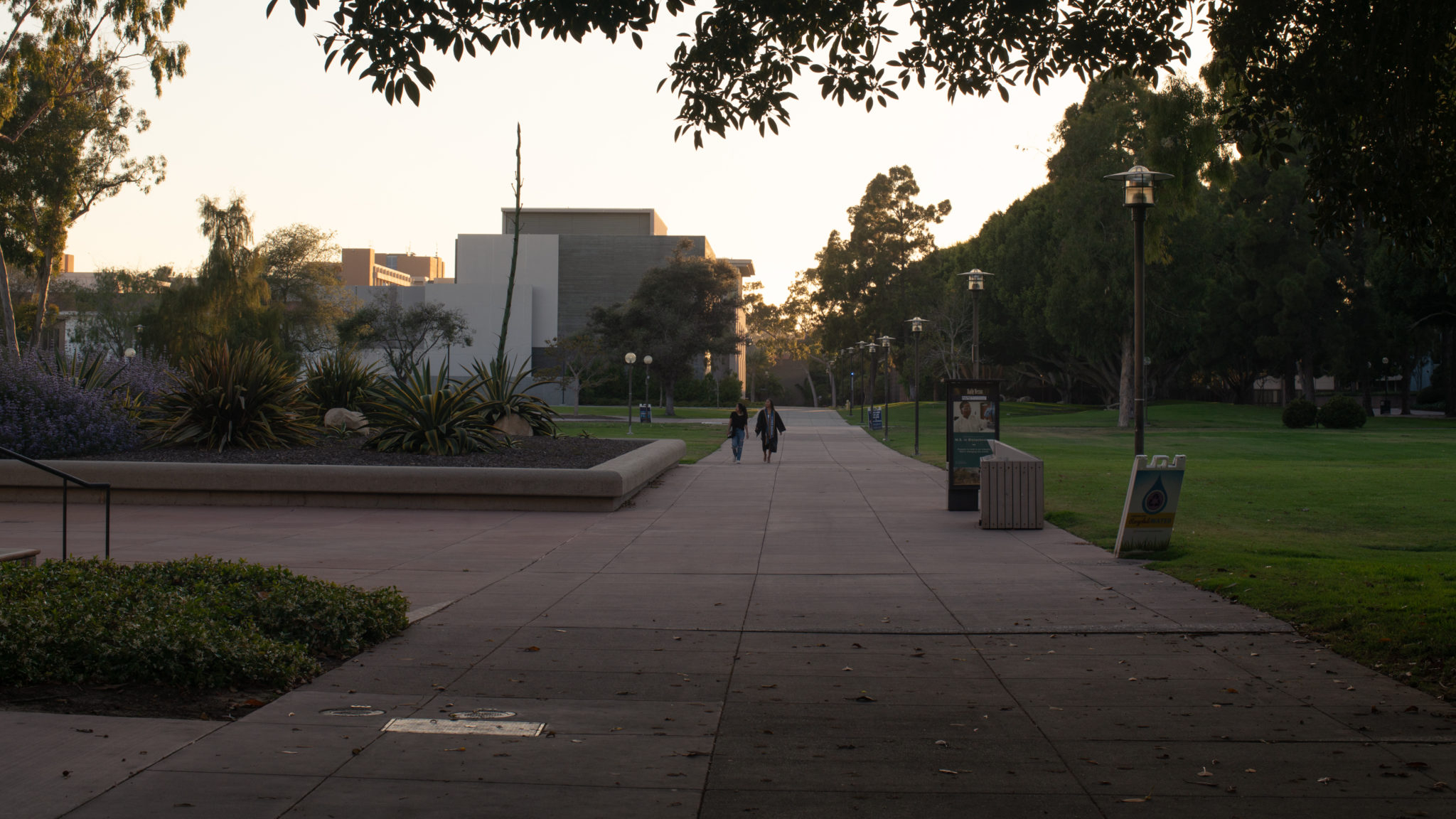 A graduate walked along the Chemistry and Biochemistry Building lawn with their photographer. (Sicheng Wang / Daily Nexus) 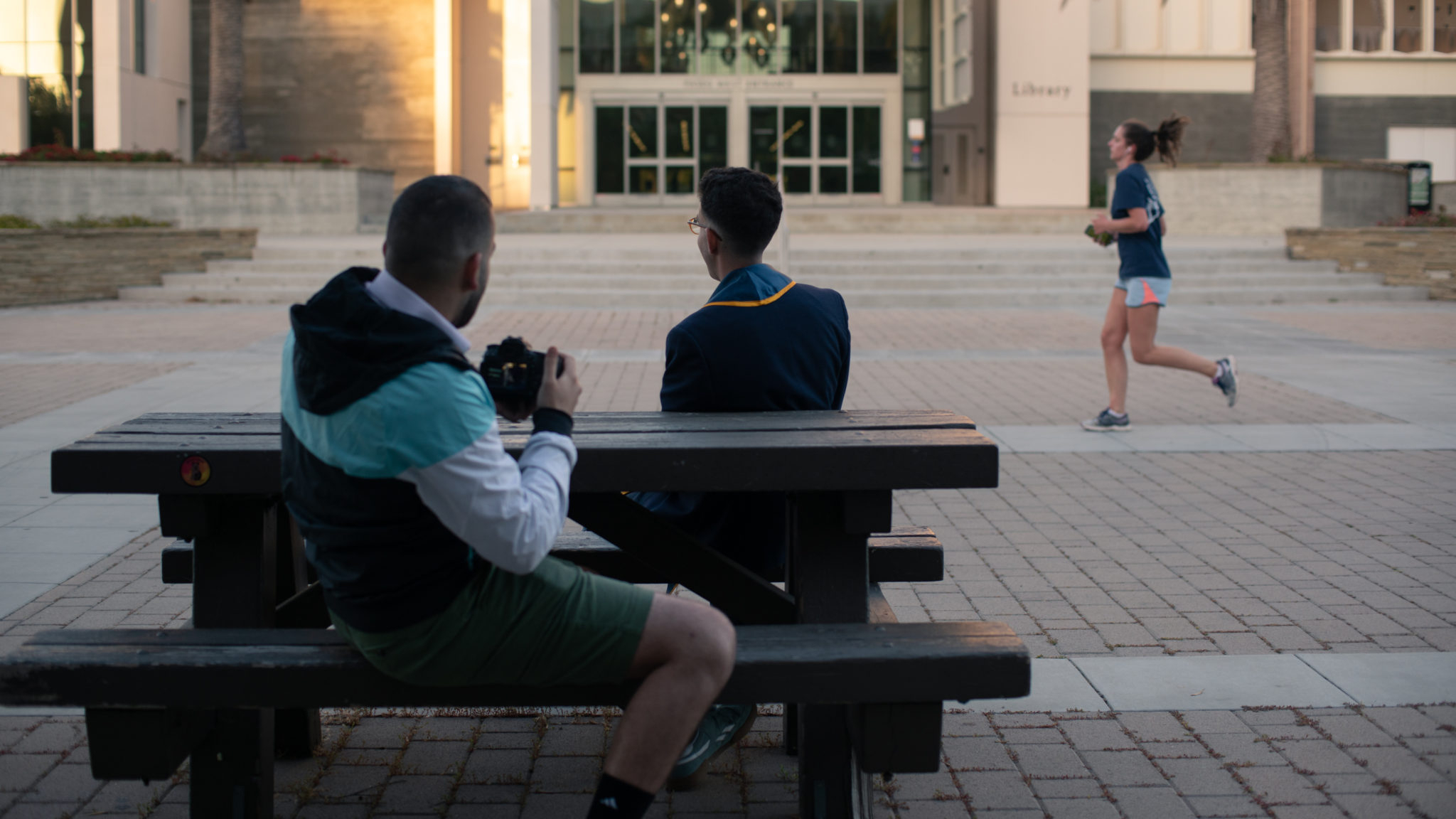 Two graduates took graduation photos for each other in front of the library. Without the bustling crowd on the walkway, a jogger was the only passerby. (Sicheng Wang / Daily Nexus) 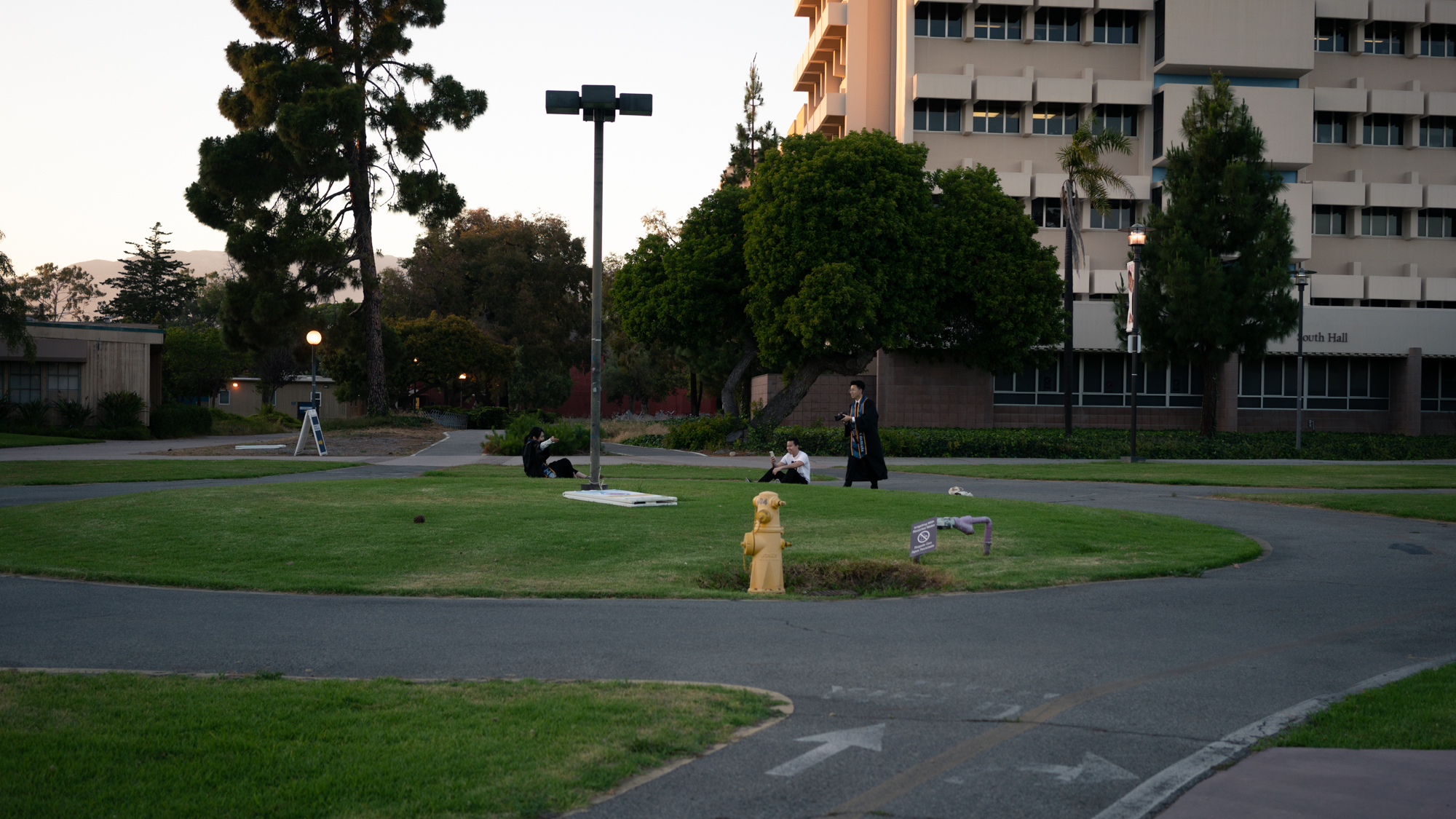 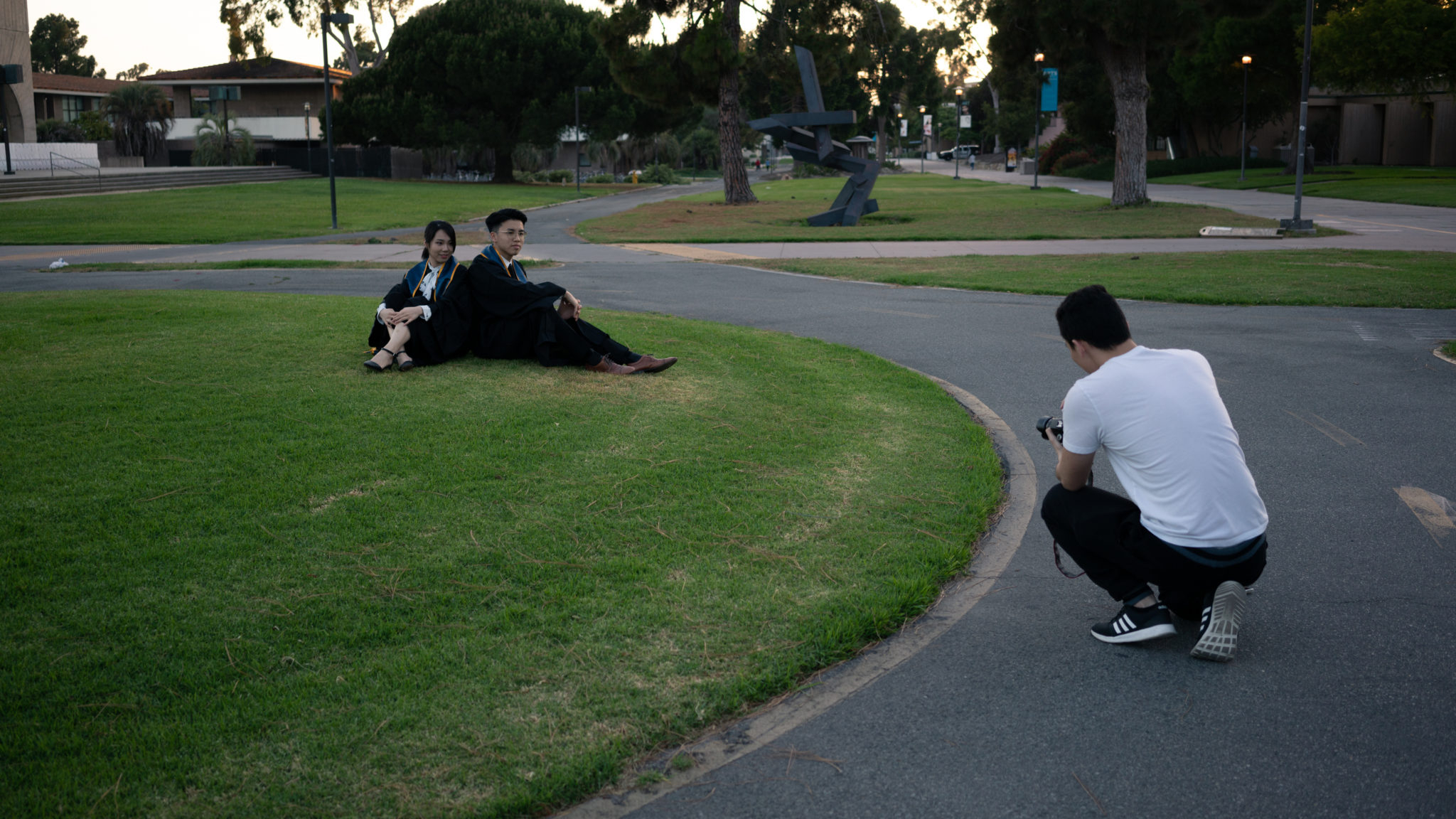 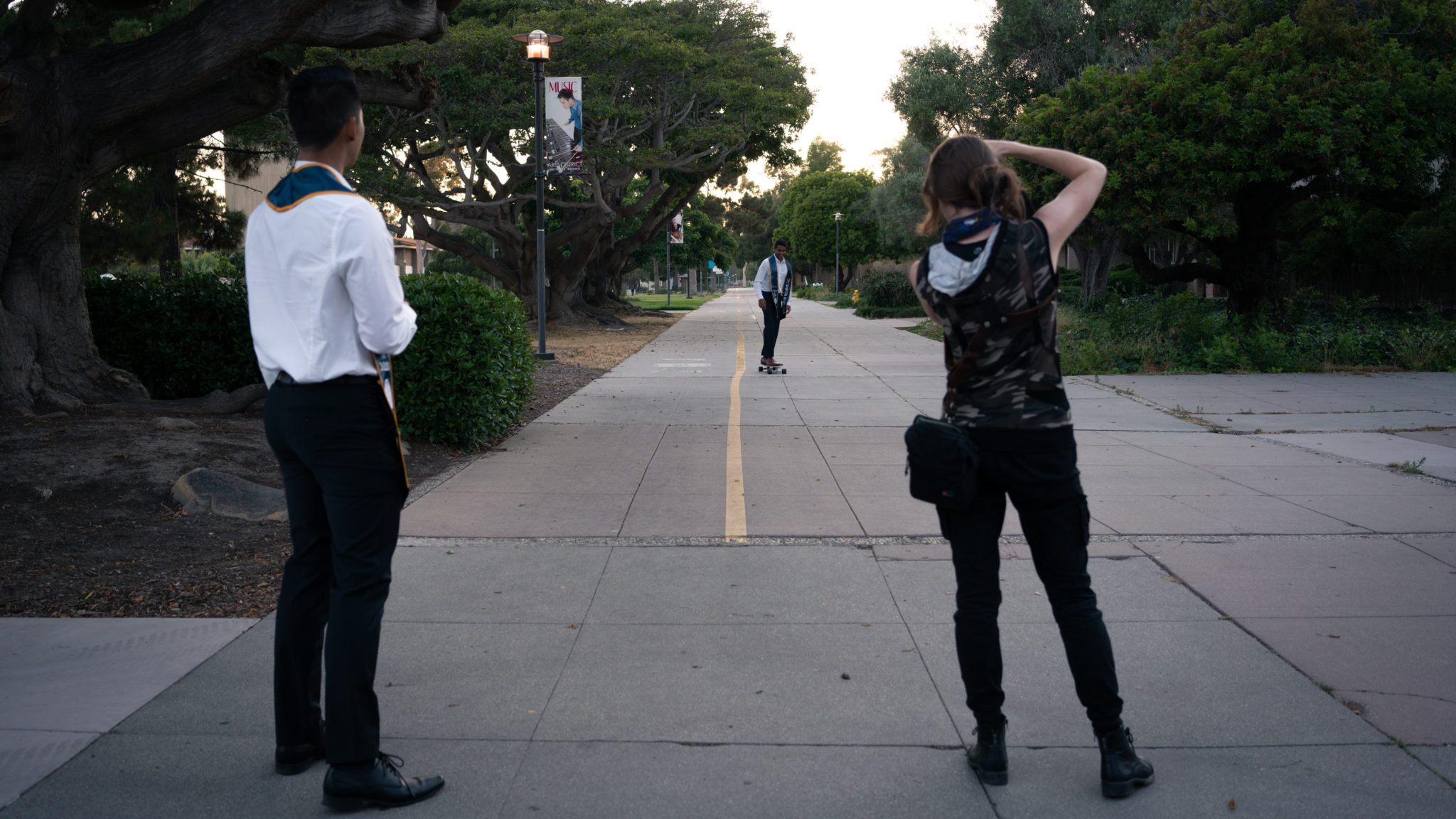 The empty campus is a stage for recreating and commemorating the days when one skateboarded between classes. (Sicheng Wang / Daily Nexus) 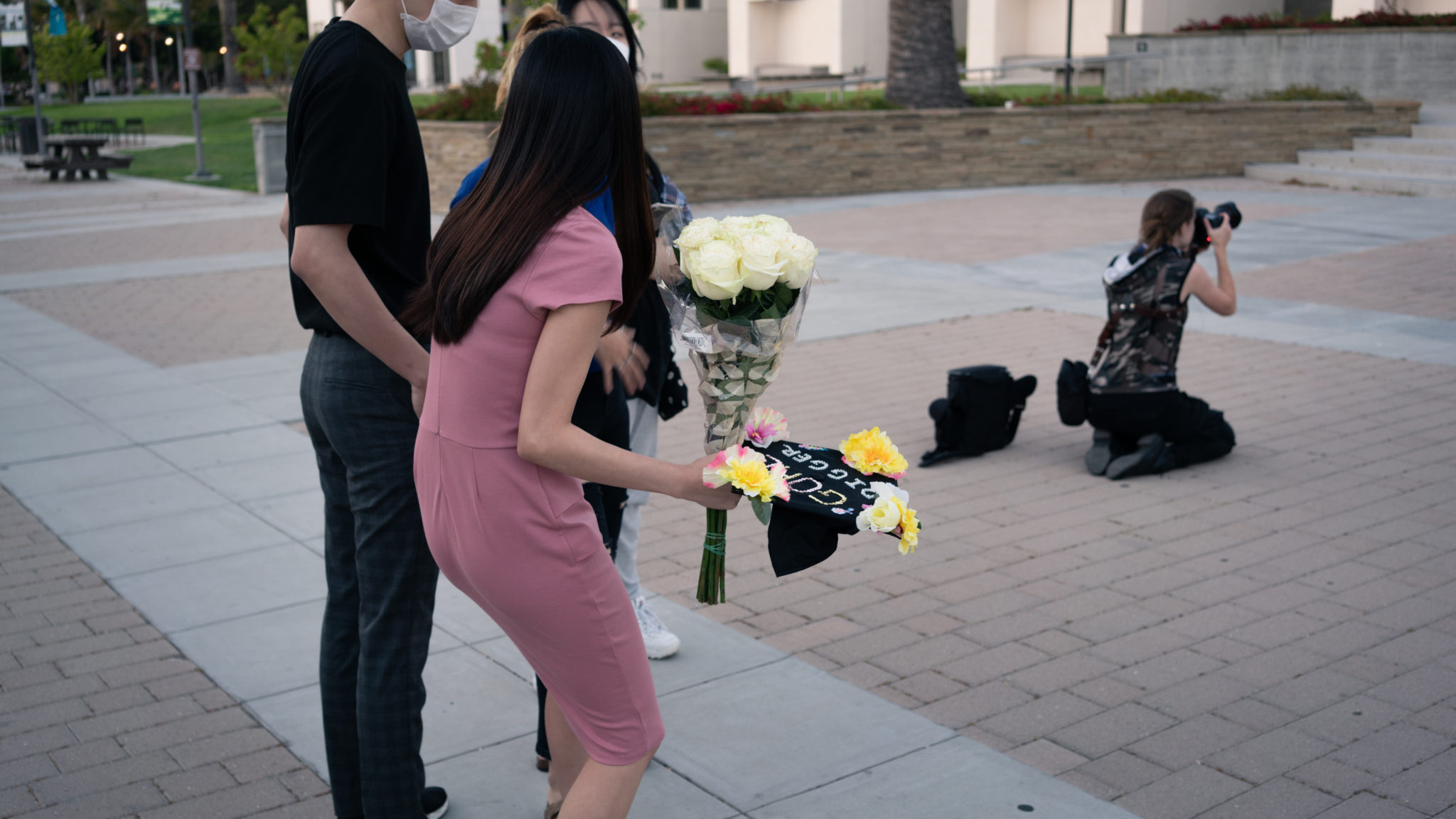 A graduate and her friends awaited a photo shoot in front of the library. (Sicheng Wang / Daily Nexus) 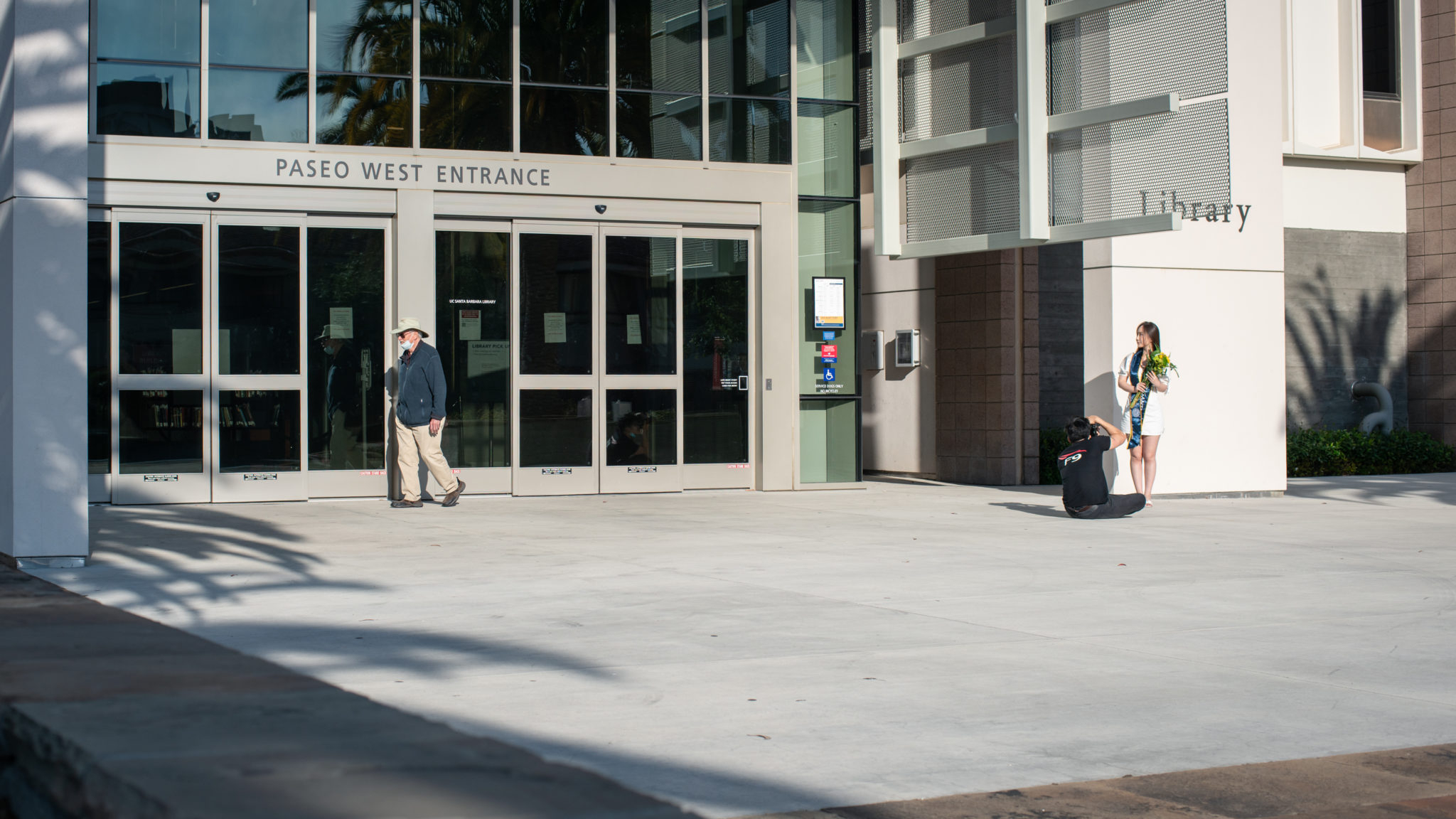 A graduate posed for a photo at the Paseo West entrance of the library as a man with a face covering walked past the doors. (Sicheng Wang / Daily Nexus) 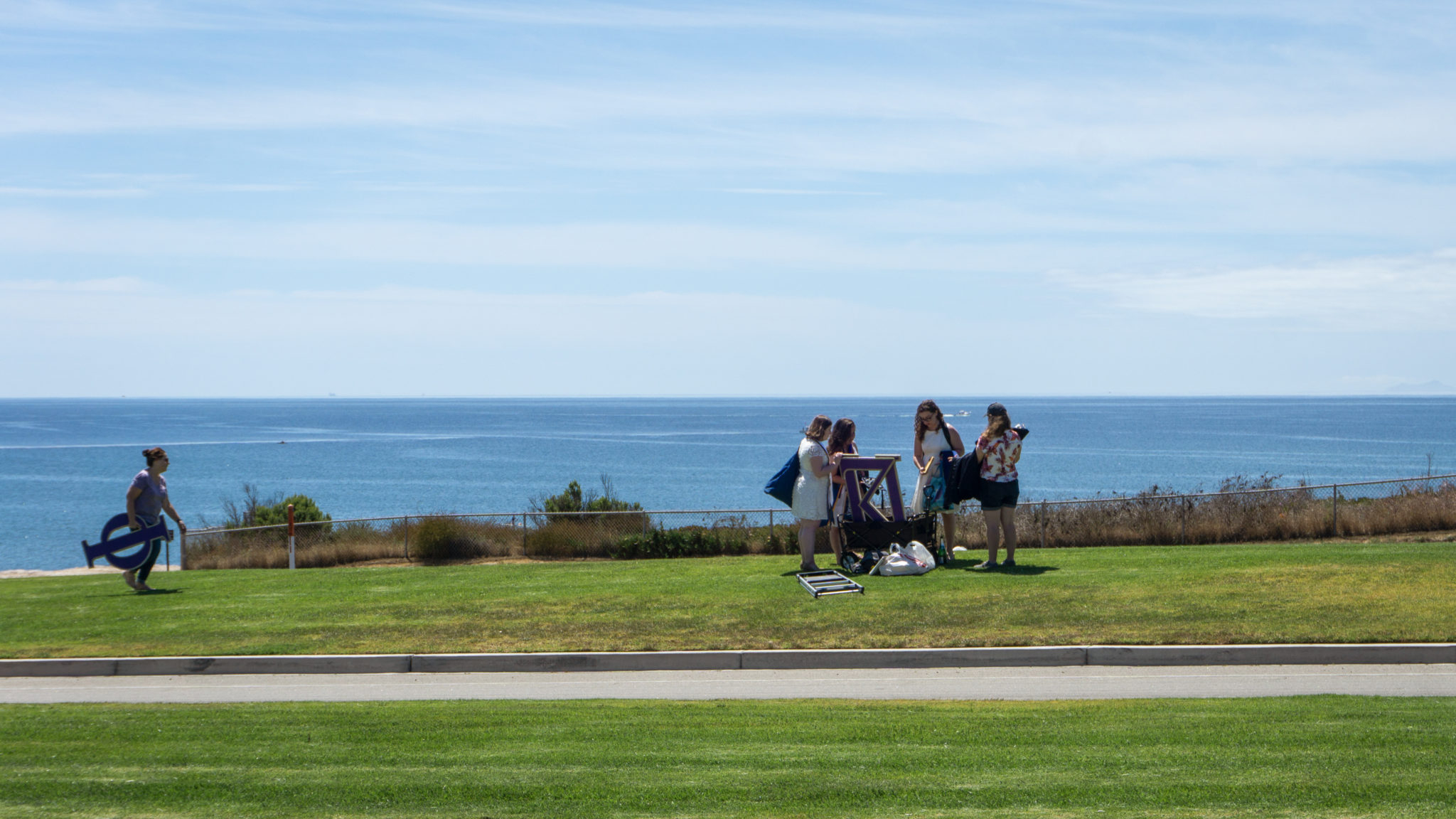 Members and staff of a sorority prepared for a graduation photo shoot on the lawn in front of Henley Gate. (Sicheng Wang / Daily Nexus) 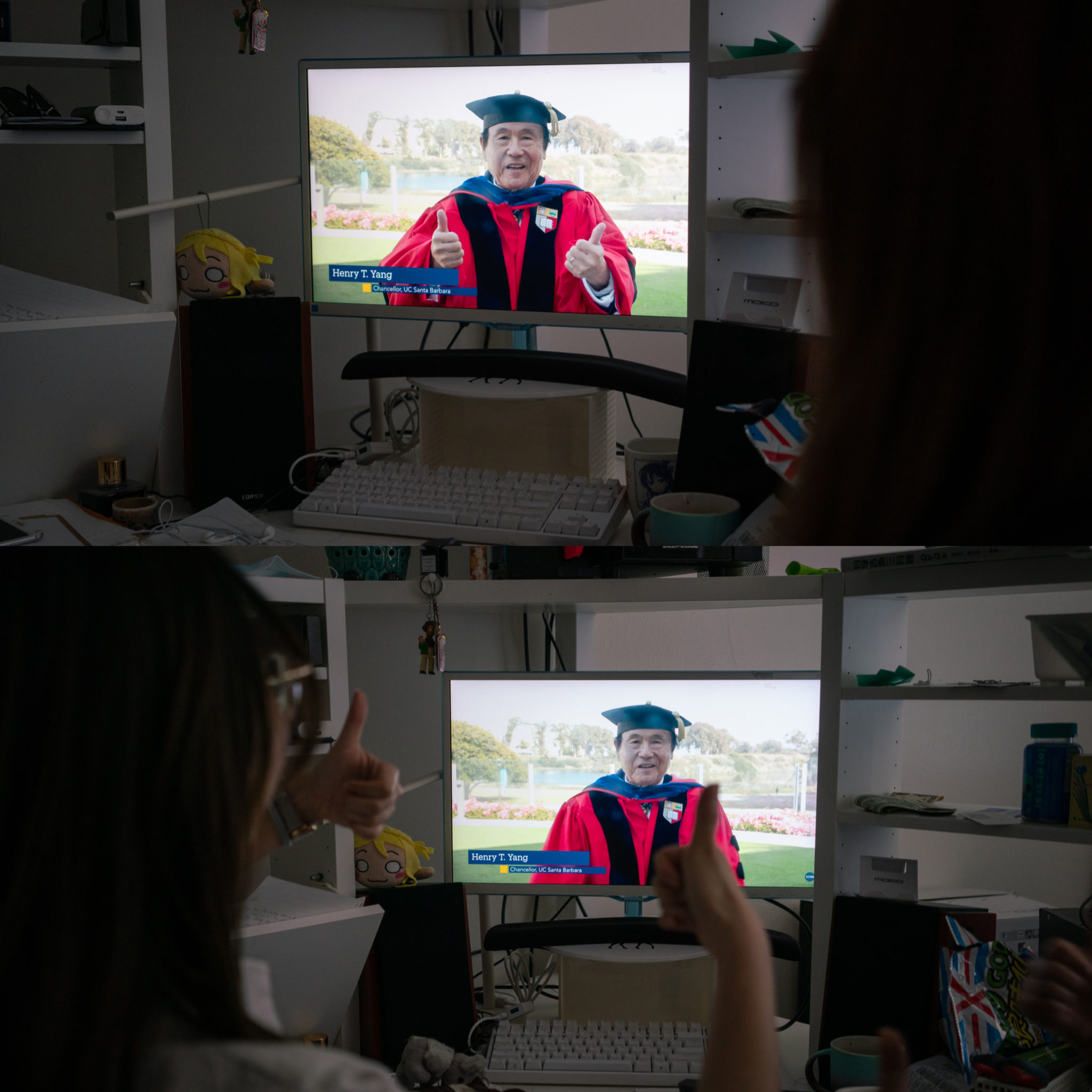 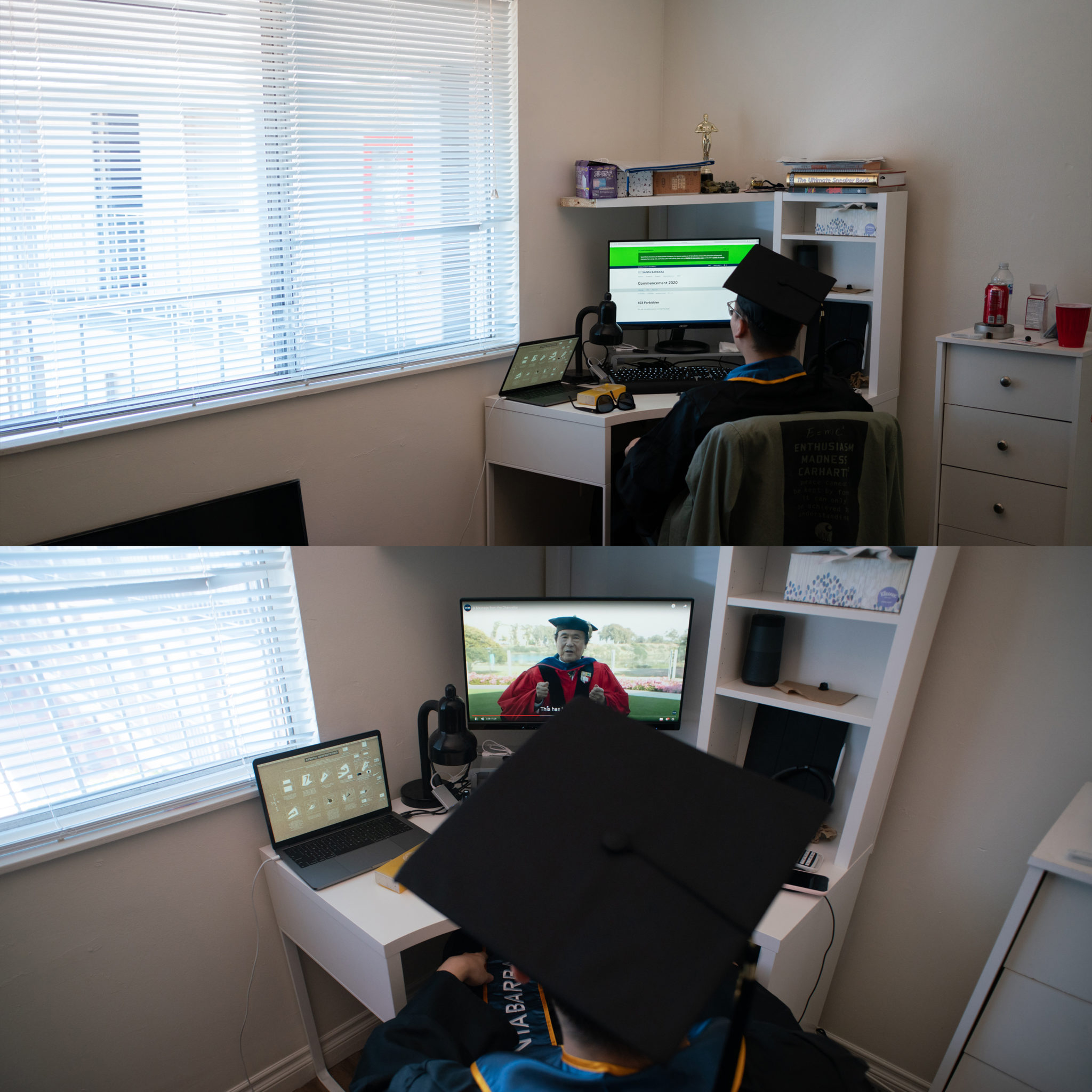 William Ge, a physics major who is expecting to graduate by the end of the summer, dressed fully in graduation attire to view the virtual commencement speeches. (Sicheng Wang / Daily Nexus) 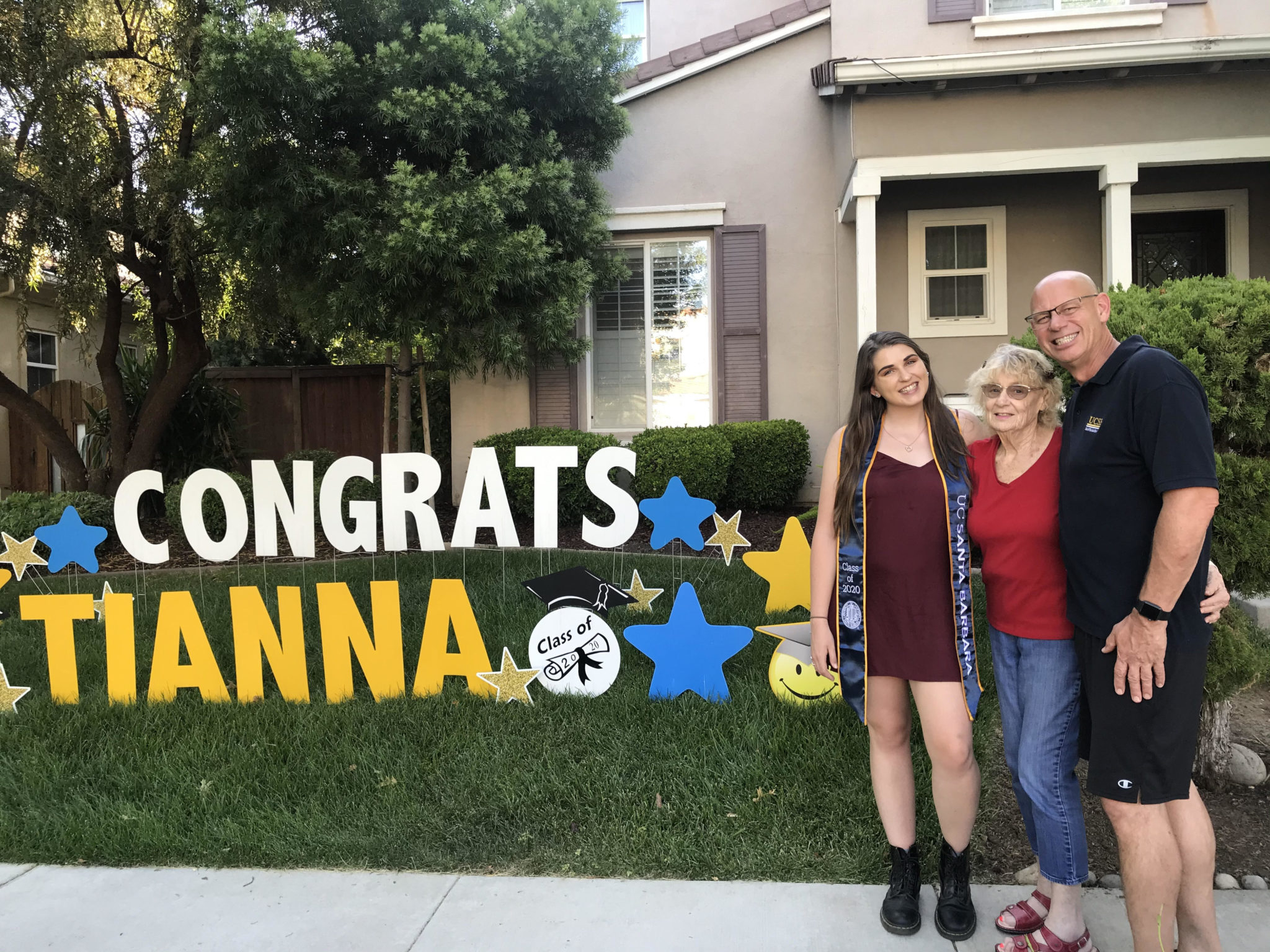 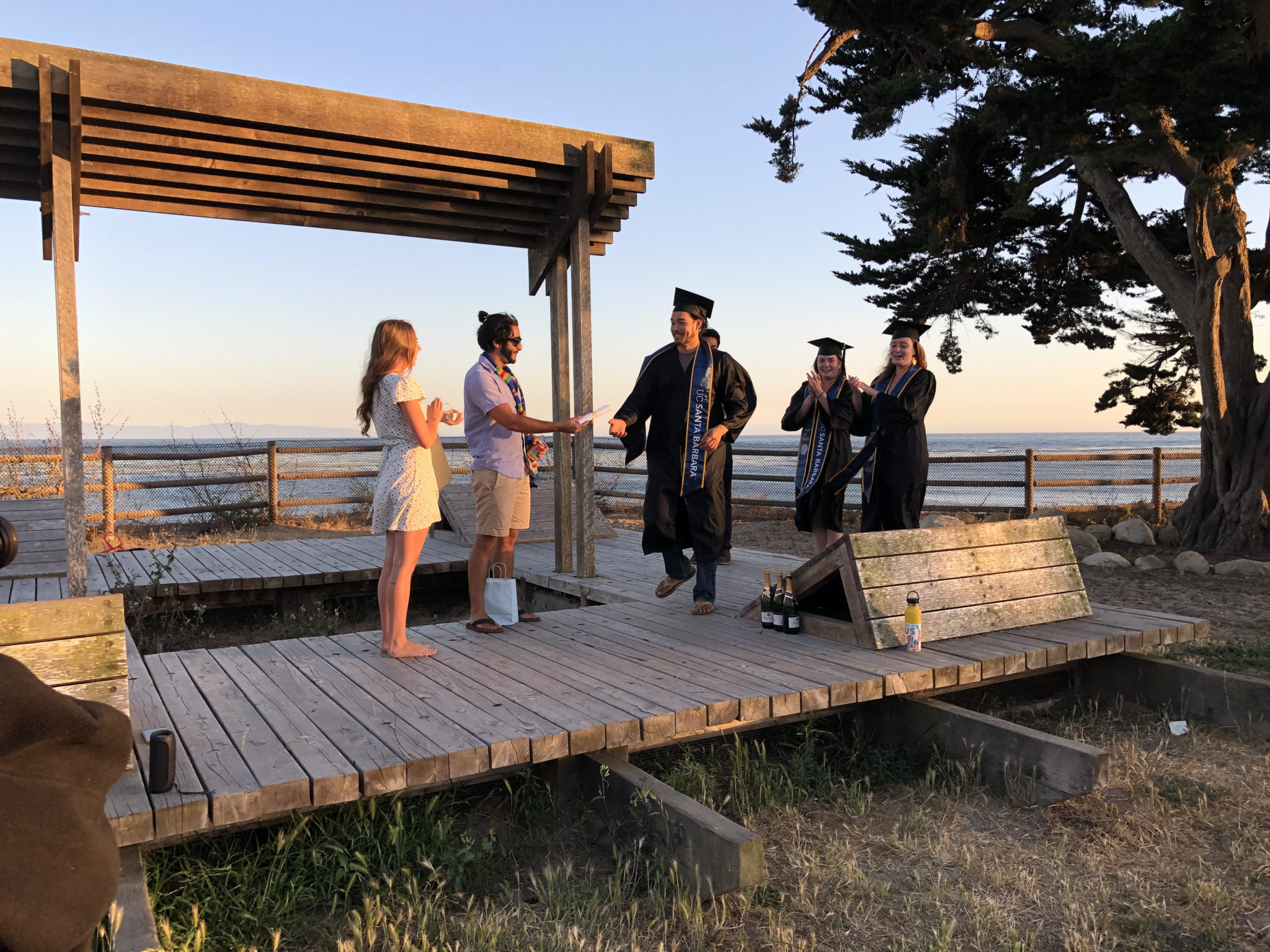 Lily Carrow, a recent graduate who double majored in history and sociology, held a mock commencement with friends who were graduating at the Sea Lookout Park. One of her friends passed out “diplomas” to graduates as “Pomp and Circumstance” played from a Bluetooth speaker. (Courtesy of Lily Carrow) 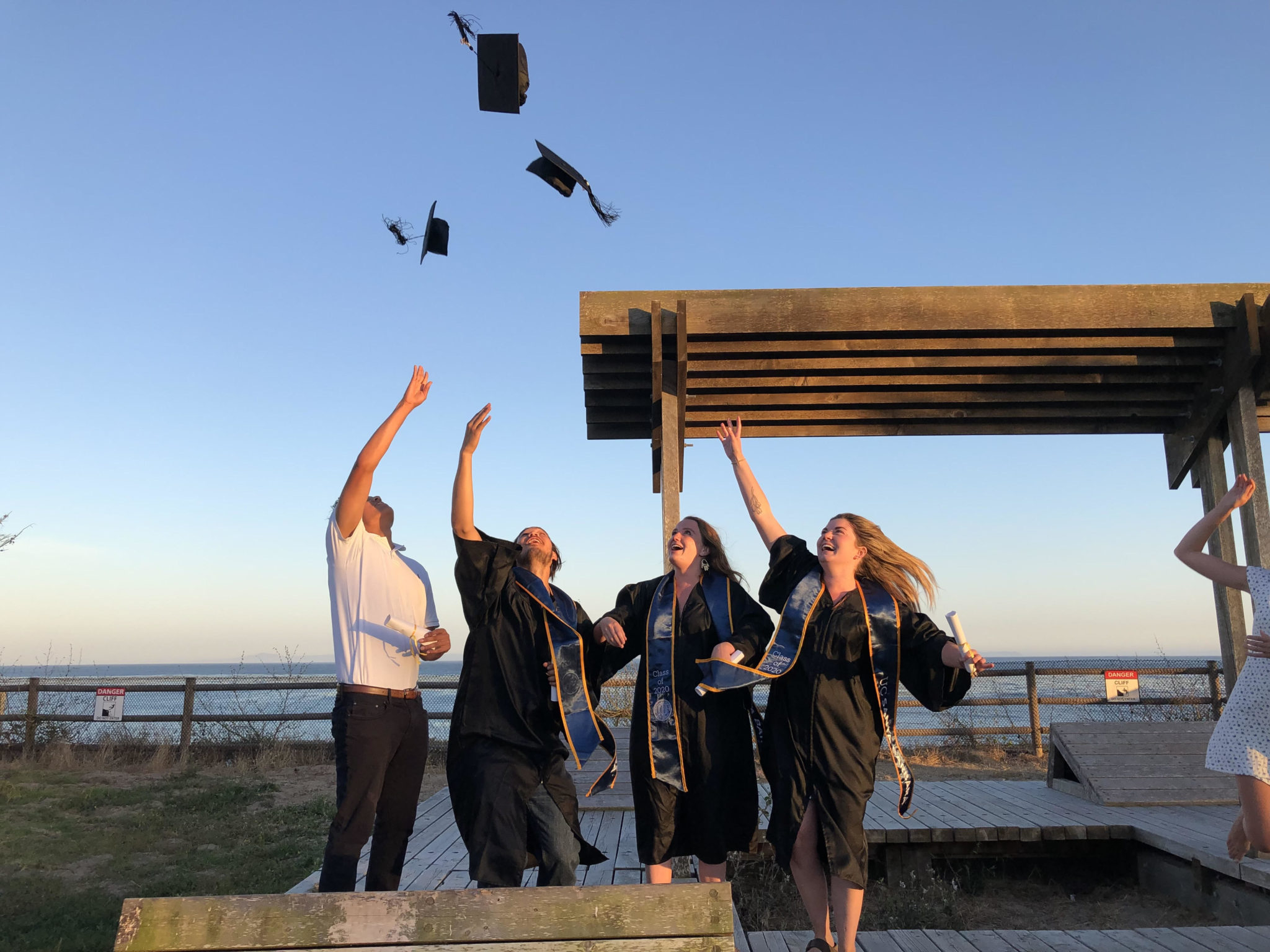 Lily Carrow, a recent graduate who double majored in history and sociology, held a mock commencement with friends who were graduating at the Sea Lookout Park. (Courtesy of Lily Carrow) 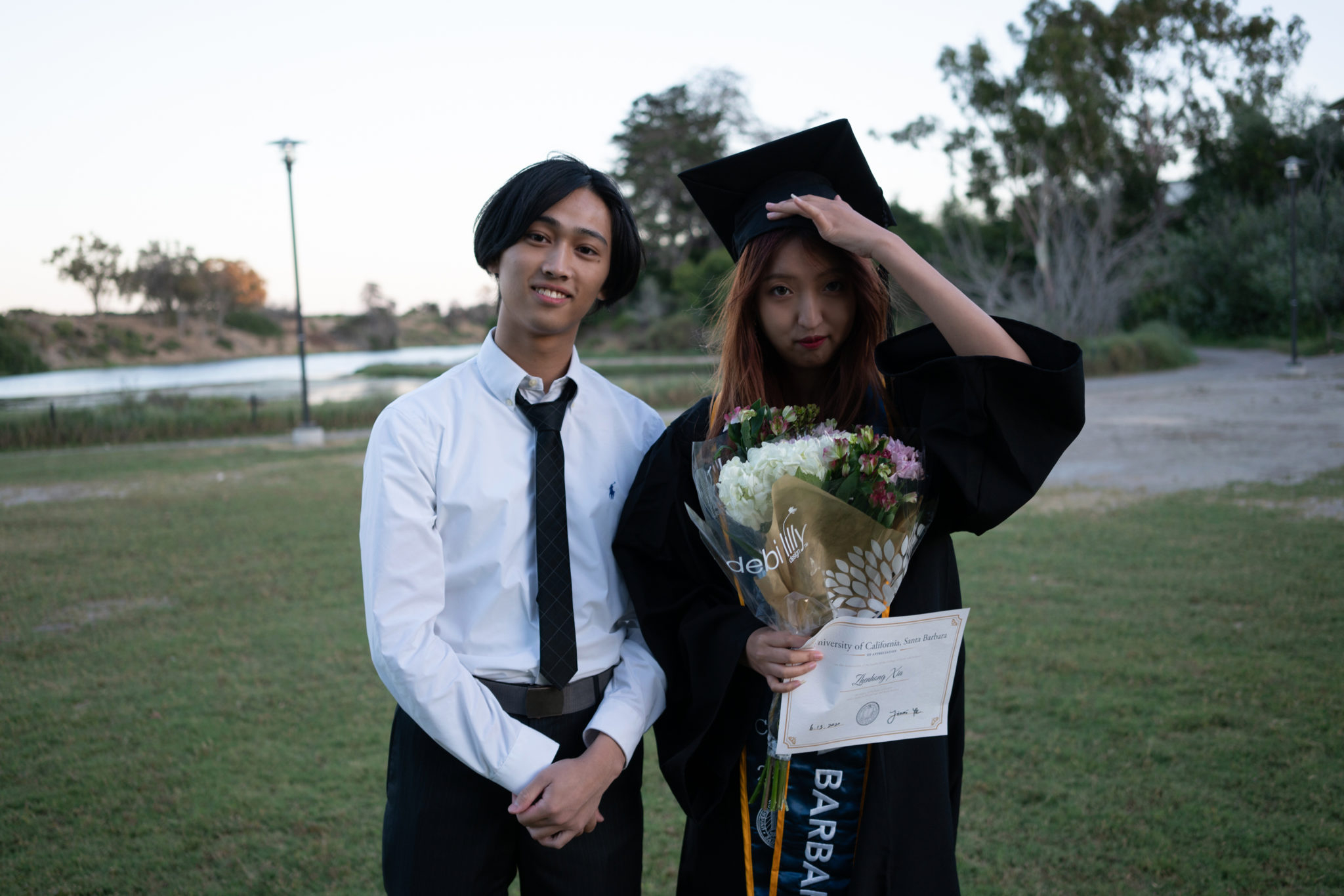 Zhenhong Xia, a psychological and brain science (PBS) and East Asian languages and cultural studies double major, received a bouquet and a letter-sized “diploma” from her friend Jiaxi Ye at a mock commencement. (Courtesy of Sherinx Li)

Sicheng Wang
Sicheng Wang is a junior in Mechanical Engineering and the current Photo Editor at Daily Nexus. Photography and journalism are some of his interests that seem not very relevent to his field of study. He can be reached at photo@dailynexus.com.