Clarkia unguiculata is an elegant, drought-resistant purple wildflower found all throughout the oak woodlands of California, whether these be those in the Sierra Nevada, the Coast Ranges or even farther south in the Peninsular Ranges. 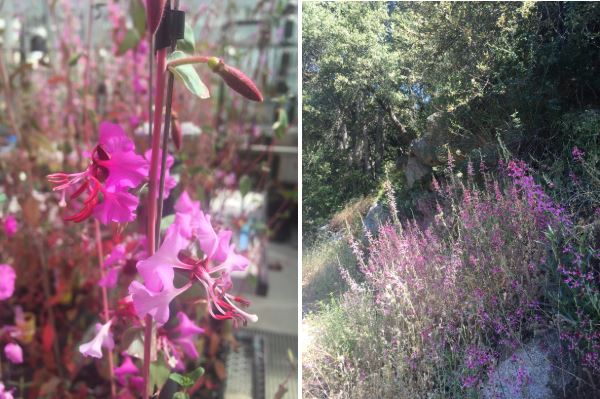 C. unguiculata in both the laboratory setting and its natural habitat. Courtesy of Kristen Peach

A former researcher with the Mazer Lab at UC Santa Barbara, Kristen Peach, has made headway in answering questions concerning the properties of the lovely flower. Peach studied C. unguiculata for all of her time as a Ph.D. student at UCSB, focusing on the ecology and evolution of reproductive traits in the species.

In this particular research study, published in Frontiers in Plant Science, Peach sought to examine the effects that particular conditions correlated to climate have on the floral reproductive traits of the wildflower, such as temperature and solar ultraviolet radiation.

“I was not really interested in ultraviolet (UV) floral patterns until 2015 when I read a paper published by Dr. Matt Koski and Dr. Tia Lynn Ashman in Nature about how solar UV can shape the evolution of UV floral patterns,” Peach wrote in email correspondence to the Nexus.

“Evolutionary biologists consider the diversification of flowering plants to be primarily driven by a combination of variation in abiotic and biotic conditions, so decades of research preceded my work on this topic.”

Susan Mazer, Peach’s advisor, has used Clarkia as a study subject for 15 years, conducting research into the effects of environmental stress on the “form and function of wild plants,” as well as correlations observed between climate and the geographic distribution of traits seen in plants.

With Clarkia specifically, Mazer found in previous studies that populations and related species which were adapted to hotness and dryness developed faster, flowered earlier, made smaller flowers, produced seeds earlier and were more likely self-fertilized compared to those in colder and wetter settings.

“The large geographic range of Clarkia unguiculata provides a mosaic (a lot of unique combinations of climate and geography) in which to study the factors associated with the evolutionary diversification of floral traits beyond the traditional plant-pollinator framework,” Peach said.

“Latitude is often used as a proxy for solar UV, temperature, and precipitation,” Peach said. However, there are some things which complicate the relationship between latitude and those attributes which use latitude as a proxy.

In California, the influence of recurring coastal fog is also a complicating factor, introducing longitudinal variation as one travels east inland from the coasts.

“So latitude is an imperfect proxy for solar UV,” Peach added

To rectify this, Peach looked at the effects of these “abiotic factors” in a way in which they could be observed untethered from latitude. She and her collaborators quantified several floral traits in populations raised in greenhouses. Altogether, these populations represented eight wild populations of the flower, spanning a wide breadth geographically.

These traits included floral pattern size, pollen performance and anthocyanin concentration — anthocyanin being a flavonoid, which are compounds created in response to environmental stressors, as well as used to “produce flower colors to attract pollinators,” Peach said.

“In support of our predictions, populations of C. unguiculata characterized by high solar UV conditions were associated with higher mean floral anthocyanin concentration than those in low UV conditions.”

However, the researchers also observed effects contrary to what they anticipated. For instance, higher UV had a negative effect on the area of the UV nectar guide, the nectar guide being the indicators on flowers which “guide” pollinators.

“To our knowledge, this is also the first study to describe the presence of UV-absorbing floral patterns (nectar guides) in C. unguiculata,” Peach said.

“In this study we found that intraspecific variation in floral color, pattern, and size is geographically structured and that several components of climate (and topography) explain a significant proportion of variation in these traits. However, only some of the geographic patterns reported here are consistent with those observed in other species.”

In particular, the concentration of anthocyanin and the size of the nectar guide did not influence pollen performance in any light treatments used in the study, according to Peach.

The study is helpful in establishing a baseline for the mechanisms used by the flowers which are dictated by climate in the long term. With humanity embarking on a slow march toward a warmer world, such a baseline will become much more useful as C. unguiculata finds itself forced to adapt, Peach believes.

“The changes in climate predicted for North America in the coming decades will alter the selective pressures that influence the evolution of floral traits in wild populations,” Peach said.

“Gaining a clear understanding of the mechanisms by which plants have responded to a range of selective scenarios in the (relatively) recent past can broaden our knowledge of evolutionary processes and inform estimates of how populations and species may respond to long term changes in climate and landscape.”