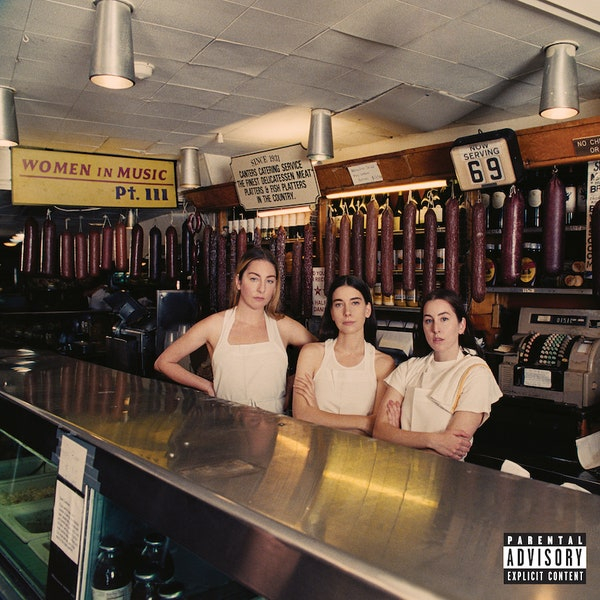 The Haim sisters have become skilled masters of meshing colorful production with dark lyrics, and nowhere is this more clear than on the opening track to their third studio album, “Women in Music Pt. III.” “These days, these days, I can’t win/These days, I can’t see no visions/I’m breaking, losing faith,” Danielle sings on the chorus of “Los Angeles” while surrounded by bright and sunshiny production.

The themes on this album are darker than normal, owing to a string of recent trauma in the sisters’ lives. Danielle’s boyfriend and album producer Ariel Rechtshaid had a bout of cancer, Este has dealt with diabetes and Alana has been grieving for a best friend’s death. All of these struggles are felt in “Hallelujah,” the most poignant and straightforward song of the bunch, which is about gratitude toward sisterhood. “My verse is about our relationship as sisters … This song is a big thank you to the people in your life that love and support you every day,” Danielle wrote in a Facebook post upon the song’s release last November. The stripped-back production and gorgeous harmonies make it sound like a 2020 version of Fleetwood Mac’s “Landslide,” and when Alana sings, “I had a best friend but she has come to pass/One I wish I could see now,” the emotions running through the song feel similar as well.

Not written for quarantine but perfect for it, “I Know Alone” perfectly encapsulates the feeling of being stuck in a rut with no one to come help. “Nights turn into days/That turn to grey/Keep turning over/Some things never grow/I know alone/Like no one else does,” Danielle murmurs on the chorus across a bouncy, dark instrumental, one of Haim’s pop-friendly beats. “I’ve Been Down” also perfectly matches quarantine life: “Trying to get myself through this/And I’ve been watching too much TV/Looking up at the ceiling/It’s been making me feel creepy.” Despite a clunky chorus with the “Come on, come on, come on, baby” repetition, this song overall features some of the most down-to-earth lyrics on the record.

“Now I’m In It,” which is about catching yourself the moment you start to enter into a depressive episode, sounds brighter on the surface but is equally as dark lyrically. The opening lines, “Looking in the mirror again and again/Wishing the reflection would tell me something/I, I can’t get a hold of myself/I can’t get outta this situation,” spoken fast over a pulsating instrumental gives an example of the kind of racing thoughts in the narrator’s head. While “Cause now I’m in it/But I’ve been trying to find my way back for a minute/Damn, I’m in it” shows the moment of recognition and acceptance, “Something in the way that I felt when I woke up/Told me that I shouldn’t give in, give up hope” demonstrates resilience and the hopeful attitude necessary for those kinds of days. The vocal layering, production and lyrics all combine to produce a fantastic song, one which we could all relate to.

The sisters also write about relationship problems, but they do it in a way that always feels lighthearted, like they know they’ll be okay. “Don’t Wanna” describes being in a loose, early relationship but one that feels like it’ll be the right path. “Well, we both have nights/Waking up in strangers’ beds/But I don’t wanna, don’t wanna/I don’t wanna give up yet,” they sing on the chorus that explodes when it gets to the outro, combining layers of instrumentation and background vocals that work so well together. Although it’s basically the same song, “Another Try” also mentions relationship problems, this time over a tropical, breezy beat that’s close to, but not crossing, the line of cliché.

Guitar-driven and featuring shining vocals, “The Steps” deals with a partner not realizing one’s self-worth and individuality. “And every day I wake up and I make money for myself/And though we share a bed, you know that I don’t need your help/Do you understand?/You don’t understand me, baby,” they assert on the chorus. Though it’s a less engaging track, “Man from the Magazine” deals with feminism as well, recounting an invasive experience with journalists. “‘Do you make the same faces in bed?’/Hey, man, what kind of question is that?” alone shows how much the Haim sisters have had to deal with being three women in music.

Some of HAIM’s best work shows up in this tracklist, though differing in style. “Up From A Dream” has a foggy atmosphere and heavy baseline that makes way for an amazing guitar solo. It features dazed lyrics, as if the narrator has literally just woken up (“Something you see wakes you up from the dream/Wanna go back to sleep but now you’re up from the dream.”) “3AM” is an irresistibly catchy throwback to ’90s R&B, complete with a voicemail intro that had to be auditioned for by the sisters’ friends. “I think you can hear the amount of joy and laughs we had making this song,” Alana told Apple Music. On the album closer, “Summer Girl,” Danielle writes about Rechtshaid’s diagnosis but with a reaffirming and positive tone: “I see it in your face, I’m relief/I’m your summer girl.”

The Haim sisters had to travel through darkness to create this record, but on the other side was a tunnel of light you can hear through the quality production. Their writing is real, unforced and instantly relatable.