The Daily Nexus
Opinion
Why Are the Police So Afraid of Transparency and Accountability?
June 18, 2020 at 9:00 am by Sean Crommelin

Floyd’s killing itself follows a long succession of highly publicized police murders, including that of Ahmaud Arbery, who was murdered by a former police officer and his son for the high crime of exercising outdoors, and Breonna Taylor, murdered by police officers who broke into her home, exercising a no-knock warrant in search of an individual who lived in a different part of town and was already in police custody. 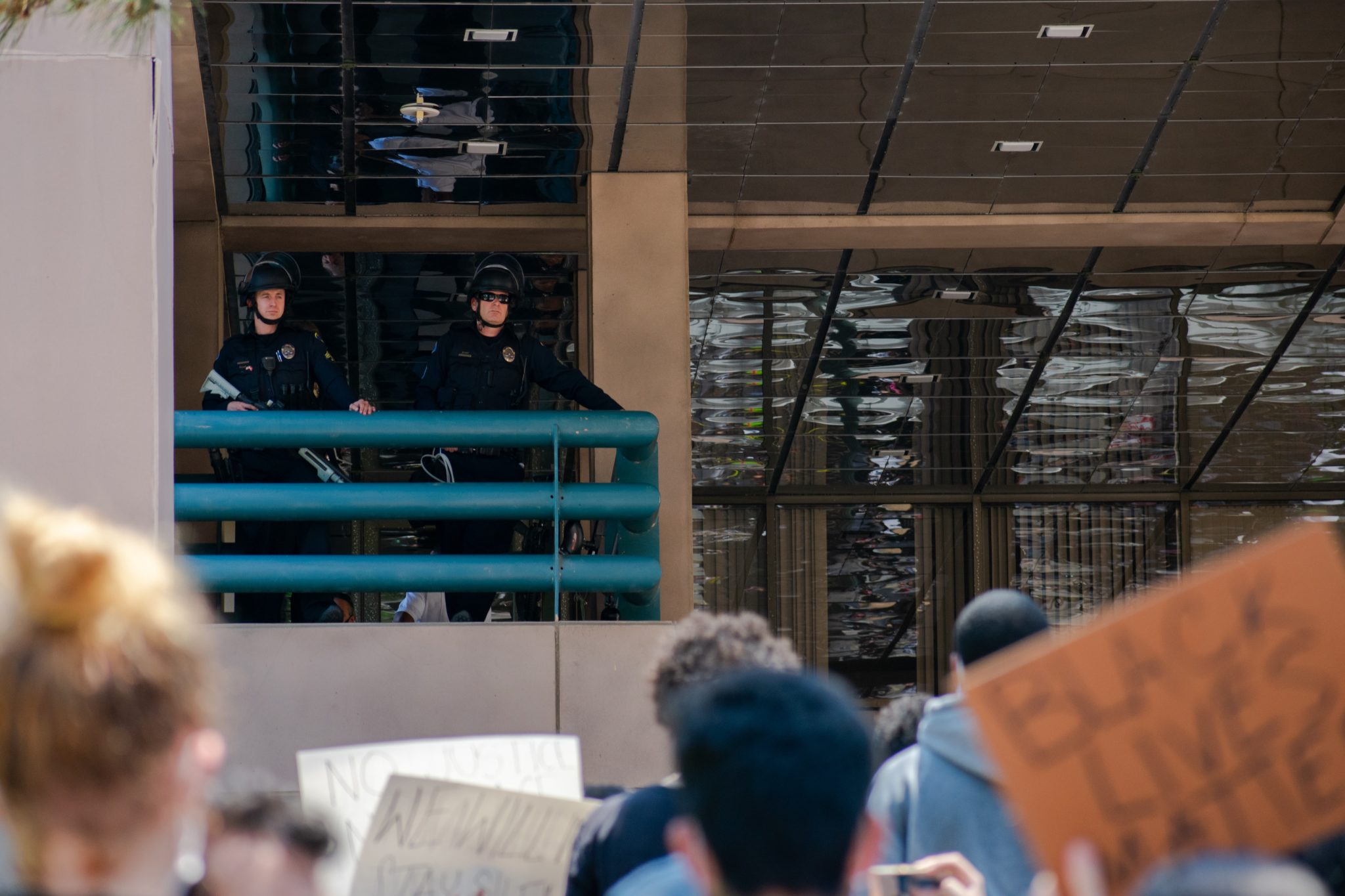 Chauvin is due to appear in court later this month, facing charges of second-degree murder and manslaughter. His companions face charges of “aiding and abetting second degree murder.”

Chauvin had an extensive history of misconduct but was still allowed to work. Those in charge of Chauvin saw the glaring warning signs and largely ignored them; meanwhile, many, just like Chauvin, continue to work in the police force. Chauvin is only facing these charges because of national outrage.

Arbery’s murderers were arrested 74 days after the his death, which coincided with a video of the murder going viral and attracting national outrage. Taylor’s murder similarly went largely unnoticed nationally until Shaun King brought attention to it on social media.

It makes sense, then, that protests all over the country and even the world have exploded. In the face of this, it is important to acknowledge the problems with the police in the U.S., which existed long before Floyd was killed, and will persist as long as law enforcement wields the power and impunity that it has wrongly held for generations.

This is not to suggest that every individual in law enforcement is hell-bent on killing and abusing their power. However, the system governing the police which unflinchingly acts to protect amoral cops — and a culture which punishes those who speak up —  tells us everything that we need to know. As it pertains to the police, the law is not about justice, it’s about keeping power where it already is — even if the cost is human life.

Moreover, for a moment, think of the police as though it were a human body. A bad cop is like a gangrenous limb. It cannot be healed, therefore it needs to be removed. If you leave the limb alone, what does it do?

Protecting a bad cop is like holding onto that gangrenous limb. When you steadfastly defend those who are unfit to serve, you only serve to erode the credibility of every other officer. You force law enforcement and the communities they purportedly protect into a toxic, combative relationship.

Police unions and the justice system —inexplicably— do all in their power to keep the withered limb attached.

Why is this the case? Why is it that, as an institution, law enforcement is unwilling to hold its people accountable? Killings need to be caught on video and go viral to be investigated, let alone prosecuted. “Bad cops” are shielded from the consequences of their actions by unions and justice remains elusive to the families of victims.

Why is it that, as an institution, law enforcement is unwilling to hold its people accountable?

It is particularly disconcerting that independent investigations have unveiled officers with histories of misconduct who continue to work and act against the public interest. More than a thousand of these cases have yet to be flagged by prosecutors.

Officers who have been convicted of crimes themselves continue to be employed in the police. In California, police who have “[driven] drunk, cheated on time cards, brutalized family members, even killed others” remain on the job, facing little to no consequences.

What is the sort of conclusion law enforcement expects the public to draw when a cop can fatally mow down two cyclists and continue working, while a Black man accused of possession of a counterfeit $20 bill is murdered in broad daylight?

Beyond that, how is the public supposed to react to accusations of police brutality when domestic abuse among members of the force is a well documented issue which brings forth little to no consequence?

In California, a San Bernardino sheriff’s union found itself bitterly embattled against transparency advocates, hoping to prevent the release of police misconduct and use-of-force records.

Oh wait, I’m sorry. That was New York. Or was it Illinois? Maybe New Hampshire? Oh — I’ve finally got this straightened out.

It is all of them and more.

Police unions argue against the release of misconduct records. When this doesn’t work, and they lose that battle, they proceed to destroy said records. These records are vital tools for keeping officers accountable, or — as we observed with Chauvin’s counts of prior misconduct — at the very least, documenting wrongdoing by cops, and they’re disposed of unceremoniously.

All of this, and we haven’t even touched on the issue of race — a baked-in problem among many in law enforcement that authorities continue to outright deny.

The Minneapolis police union president, Bob Kroll, is one particularly egregious example. Kroll was the man who, in 2016, claimed that Black Lives Matter was a terrorist organization. Now, Kroll is hell-bent on defending the four officers responsible for Floyd’s death.

At least on the second point, Kroll is typical. Unions are relentless in their desire to shield bad cops from the consequences of their heinous actions.

Beyond just rhetoric, data shows that use of force by police is more common in encounters with Black and Hispanic communities than any other demographic, that Black Americans make up a majority of innocent defendants wrongfully convicted of crimes and that Black motorists are disproportionately likely to be pulled over by officers.

Let’s talk about overt racism, shall we? The FBI warned about the infiltration of police forces by white supremacists almost 15 years ago. Despite that, this issue hasn’t been resolved or addressed at all.

Police are armed with military equipment, yet lack military training. Untrained civilians are forced to reckon with similarly untrained officers. Pundits who cursed Colin Kaepernick for kneeling then go on to sanctimoniously wax poetic about law and order. Our cities go up in plumes of gas, and police officers rain down rubber bullets indiscriminately on protestors and reporters alike.

Where do you draw the line when you have officers abusing their power and others standing alongside them, who are wholly complicit? What went through the minds of the officers in Buffalo, New York as their brethren forced an old man on the ground and walked away expressing little remorse while he bled on the sidewalk?

What do you say when the justice system so often seems to be singularly focused on absolving the police of responsibility for criminal acts?

Well, this is what you say.

Remember the names of officers and departments in these moments and hold them accountable for their actions.

Senator Brian Schatz of Hawaii is moving to include an amendment in the annual defense policy bill to shut down the Defense Department initiative, a policy — revived by President Donald Trump — which gives police departments access to military-grade equipment, like bayonets and grenade launchers.

Alongside this, Senator Rand Paul of Kentucky has introduced the Justice for Breonna Taylor Act, which would ban no-knock warrants in their entirety and force police officers to notify the inhabitants of a home before entering. There’s even precedent for this legislation; it already passed in Taylor’s home town: Louisville, Kentucky.

In addition, congressional Democrats are bringing a massive police reform bill to the table. Entitled the Justice in Policing Act of 2020, it would ban the use of chokeholds, lower the standards needed to pursue penalties both civil and criminal for police misconduct, ban no-knock warrants in drug-related cases and establish a national registry for tracking police misconduct.

Keep track of how they vote, not what they say. Keeping pretenders in office won’t bring forth progress.

Many NAACP chapters are advocating for new guidelines to hold the police accountable. These include a ban on the use of knee holds and chokeholds as well as state open records acts to make misconduct records and disciplinary histories more available to the public. They also call for the  implementation of Citizens Review Boards to further hold law enforcement accountable and rebuild eroded relationships between police and the community.

Voice your support. If you have the means, put your money where your mouth is.

Donations to community organizations and bail funds have surged since protests erupted all across the country. There are numerous options for those who support protestors and the movement beyond participating in protests themselves.

And after all of this, we all need to play a part in holding law enforcement accountable beyond the protests.

The protests are necessary, and I applaud protestors who continue to work even as their safety is jeopardized. Let’s put into legislation the outrage we are feeling.

Go beyond the federal government. Scrutinize local and municipal governments who are so often the arbiters of law enforcement practices and funding. Remember the names of officers and departments in these moments and hold them accountable for their actions.

Sean Crommelin hopes this moment is a turning point in the breakdown of the “blue wall of silence.”

The short term goal is defunding. The long term is abolition. It’s all gotta go

Abolition of what – police? Good luck when someone’s breaking into your house.

Police has abused its power far too long. I’m sure there are many good officers. But the good work they did has been drown out by the injustice some bad apples have implicated upon good people. Sadly, that has taken a big toll on what police serves: paid by tax $$, operated with immunity, filled with incompetent and unqualified people, and good people’s lives have been ruined by too many bad policemen and sloppy police work. It is high time to hammer down the message: NO MORE!! Reform, clean up or you are all FIRED!!!