The Daily Nexus
Science & Tech
The Remarkable Recovery of the Channel Island Fox
June 13, 2020 at 6:00 pm by Sean Crommelin

Halfway-submerged sections of the mighty Transverse Ranges, the Channel Islands lay just off the coast of Southern California. They’re visible from almost anywhere along the south-facing Central Coast. In Isla Vista, if one peeks out over an oceanside balcony or walks along the beach, Santa Cruz and Santa Rosa Islands dominate the horizon. 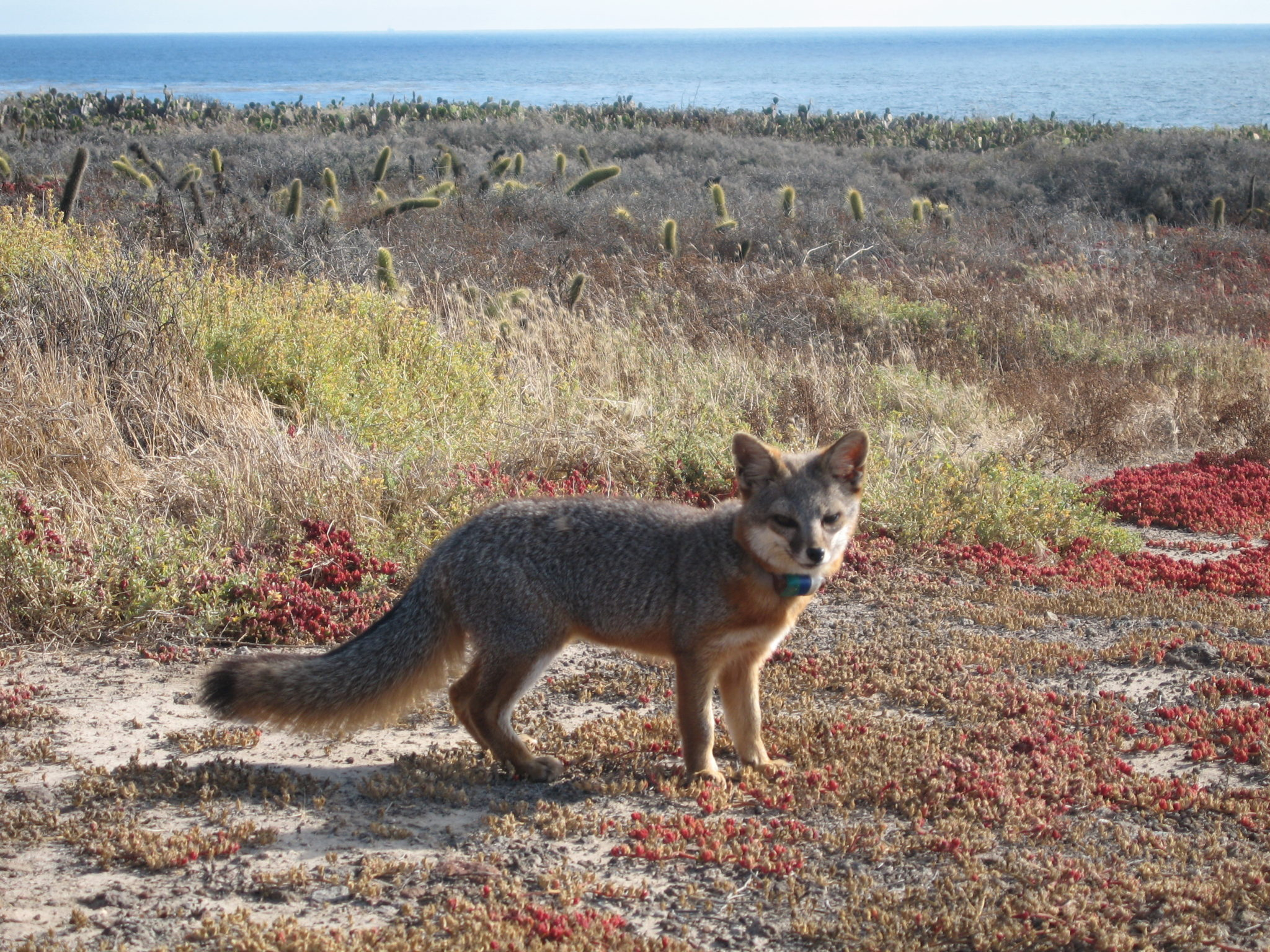 An Island fox with a radio collar on San Clemente Island, the southernmost of the Channel Islands where Sanchez currently works. Courtesy of Jessica Sanchez

The islands themselves are home to an incredible diversity of life. Under the waves lay vast kelp forests, while on land, oak woodlands are interspersed between chaparral, grasslands and even two relict stands of elusive Torrey pine. Most charismatic, perhaps, are the foxes.

“They’re definitely very clever and mischievous, but they also have a kind of fearless confidence that comes with having been a top predator for so long. They will come right up to you,” said Jessica Sanchez, a wildlife biologist, veterinarian and epidemiologist at UC Davis.

Sanchez has been working with the Channel Island fox (Urocyon littoralis) since 2006, when she joined in the efforts to repopulate the fox populations following a rapid decline which brought the species to the brink of extinction.

In the late 1990s, the foxes were on a precipice. On Santa Catalina Island, an epidemic of canine distemper virus — likely introduced from the mainland — killed 95% of all the foxes on the island by 1999, while up north on Santa Cruz, Santa Rosa and San Miguel Islands, invasive golden eagles began feasting on the foxes in large numbers.

“The eagles were [initially] attracted to the islands because there was an abundance of livestock like pigs and goats for them to feed on. There were also open territories that were left because the native bald eagles had also been declining at the same time due to DDT,” Sanchez said. DDT, a chemical originally developed as an insecticide, is infamous for thinning the eggshells of many birds, particularly birds of prey. It is now banned in the United States.

Unfortunately for the foxes, their fearless nature and diurnal lifestyle made them easy targets. Better yet, they were the perfect size to be scooped up and brought to nests as a nutritious meal for infant chicks.

“They didn’t really have a lot of the evasive behaviors that mainland foxes have so they really suffered predation by these eagles and that just led to dramatic population declines,” Sanchez said.

Because of the different causes of decline, conservationists needed their recovery efforts to have a multi-pronged approach. For one thing, golden eagles would have to be extirpated from the islands.

In order to drive them away, non-native ungulates, which the golden eagles preferentially preyed on, would have to be removed for good. Concurrently, work began to reintroduce bald eagles to the islands to occupy their former territory and drive away any wayward golden eagles that were inclined to return.

Meanwhile, in order to jump-start their recovery, programs for captive breeding and furthering the  long-term monitoring of the foxes became established all across the archipelago.

“When we brought animals into captive breeding to protect them from whatever the external threat was, they actually bred really well in captivity … So the distemper outbreak ran its course and we started vaccinating foxes against it, [while] with the golden eagle threat, we were able to physically remove them and alter the landscape,” Sanchez said.

In 2006, when Sanchez began working on the northern Channel Islands with the Institute for Wildlife Studies, a captive breeding program had already been successfully established; however, threats from golden eagles still persisted.

Over the next few years she was working there, Sanchez got to observe firsthand the foxes’ remarkable recovery, with the release of the final animals in the captive breeding program on the northern islands and a transition to solely wild population monitoring and management.

“The foxes were listed as critically endangered — on some islands there were only 15 foxes and all of them had been brought in from the wild into the captive breeding facilities,” Sanchez said.

“And we went from that to a fully wild and recovered population by 2016, when the three northern islands were delisted, which has been reported as the fastest recovery of any mammal listed under the Endangered Species Act.”

Now, for many conservationists working with the foxes, the focus has shifted to the next stage in recovery, with the restoration of native plants and the further removal of invasive vegetation introduced through decades of ranching. Perhaps eventually, the ecological balance that existed before human occupation will return.

Meanwhile, Sanchez herself is studying strategies for epidemic prevention and detection in the event that another disease resurfaces. In fact, the Santa Catalina foxes are still labeled as near threatened due to the high tourist traffic that the island receives, compounding the risk of another disease outbreak.

In her latest research, Sanchez simulated the various strategies used to detect and prevent rabies and canine distemper virus with a spatial model. Working with data from foxes on San Clemente Island, Sanchez has scoped out the efficacy of preventative measures like vaccine firewalls and randomly distributed vaccinations in relation to population density.

“Pathogen transmission seems to happen faster when there’s a higher density of foxes, which has been shown with a lot of other populations. So we’re trying to figure out, given a high or low density, where the pathogen is introduced, what type of vaccination distribution is going to be the most effective?” Sanchez said.

“My hope is that our findings will allow managers to identify those guiding principles that they can then take and interpret based on their particular island’s geography and fox population.”