Zoomers are all familiar with those memes mentioning “that one molecule of serotonin trying to keep me going throughout the day,” or better yet, that beggar pleading for “a crumb of serotonin,” but how many could go deeper than that in their understanding of this ubiquitous molecule? 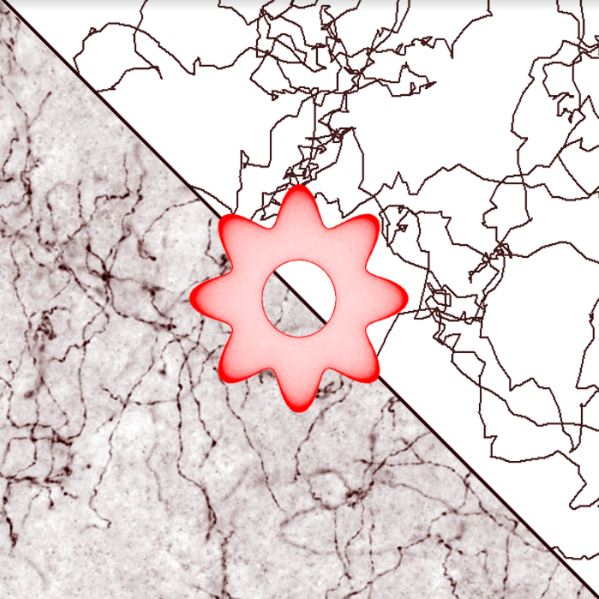 Actual serotonergic fibers in a mouse cerebral cortex (left bottom) compared to simulated FBM fibers (top right). The cookie shape in the center shows the distribution of FBM fibers in
an idealized shape with a varying border curvature. Courtesy of Skirmantas Janusonis

Serotonin, perhaps best known for contributing to feelings of well-being and happiness, is a neurotransmitter responsible for a broad swath of processes in the brain and the body. The serotonergic matrix — a network of thin fibers present everywhere in the brain with “mind-boggling density” — governs where it goes.

“It’s an ancient system; all vertebrates have that matrix, it’s not just mammals, not just humans, but all vertebrates — going back to fish — they have this matrix,” said Skirmantas Janusonis, an associate professor in UCSB’s Department of Psychological & Brain Sciences.

“As we all know, serotonin is involved with things like major depressive disorder, and obsessive compulsive disorder, autism spectrum disorder and many other conditions. Not to mention wakefulness and sleep, emotion regulation and some other [processes] that… contribute to our own well-being.”

A new paper by Janusonis, published in Frontiers in Computational Neuroscience, details the use of modeling through fractional Brownian motion to create predictive “descriptions and manipulations” of the serotonergic matrix and the density distribution of its fibers across the brain.

Brownian motion mathematically describes simple diffusion, the process of random motion which governs particles suspended in fluid, like when a sugar cube dissolves in water. But fractional Brownian motion adds another layer to the math.

“Brownian motion essentially says that each of my moves is completely independent of the other moves,” Janusonis said.

In contrast, “fractional Brownian motion says that my path is not just where I am now, or that my next step solely depends on this step; it depends on all the previous steps that I’ve made. And that sounds very simple, but mathematically, it makes it quite complex … these are biological things which tend to maintain the direction they started with; however there is still a big random element.”

Janusonis was intrigued when he encountered research from Thomas Vojta, a physicist at the Missouri University of Science and Technology, whose findings in applied physics appeared to mirror what Janusonis and his collaborators were observing in the serotonergic system.

Vojta’s paper detailed a phenomenon observed in the superdiffusive or persistent regime of fractional Brownian motion — in which the trajectories generally stick to the direction they began with — where these densities would accumulate at a border.

“So if you have something that is closed and it has a boundary or border, those trajectories will accumulate at that boundary,” Janusonis said.

Janusonis contacted Vojta, and, endowed with funding for their pilot study from the California NanoSystems Institute at UCSB, began a collaboration using supercomputing simulations to model fiber densities and attempt to approximate these distributions in the real physical brain. 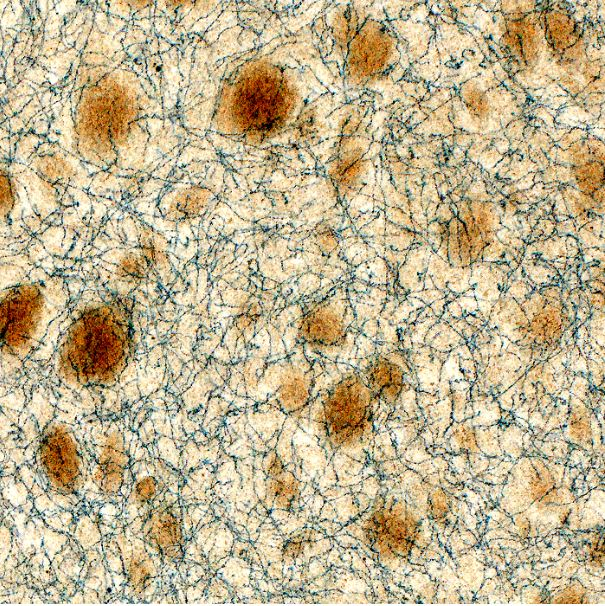 The matrix of serotonergic fibers in the basal nuclei of the mouse brain, important in cognition and motor function. Courtesy of Skirmantas Janusonis

“In this paper, we looked just at the geometry of the brain. What is the shape? Simply forget all these nuclei, forget what they do, forget layers, nuclei names, all of that; look at the shape.”

Given this, according to Janusonis, one may conclude that the shape of the brain itself, including its curvature, may influence the density of the serotonin fibers.

The flexibility of fibers is another interesting aspect of the system that can become useful from the
biomedical perspective, in observing its influence on the development of some disorders associated with
the serotonergic system, according to Janusonis.

Now, Janusonis and his graduate students, Melissa Hingorani and Kasie Mays, have been advancing experimental research in an experimental capacity in order to examine the value of fractional Brownian motion in different regions and conditions in the brain.

“[That research is] specifically focused on looking at some disorders in the brain. Being able to predict what will happen and how we can control that would be [extremely] useful,” Janusonis said.

“So this, at the core of it, is prediction. It’s not just modeling.”

Correction: The Nexus originally wrote that other factors notable to the researchers were age and inflexibility. Dr. Janusonis clarified that this could be misleading and the sentence and accompanying quote were subsequently removed.

This article misrepresents our research and omits important parts of the interview. Since the Editors have refused to make corrections and clarifications, I have requested that the article be removed.
Dr. Skirmantas Janusonis