The Daily Nexus
Tech
A Touchy Subject: UCSB Researchers Model Signals of Touch in the Human Hand
May 13, 2020 at 9:30 am by Sean Crommelin

The complex and interrelated wave mechanics of the skin — responsible for relaying tactile sensory information — have been mapped out by a UCSB researcher. 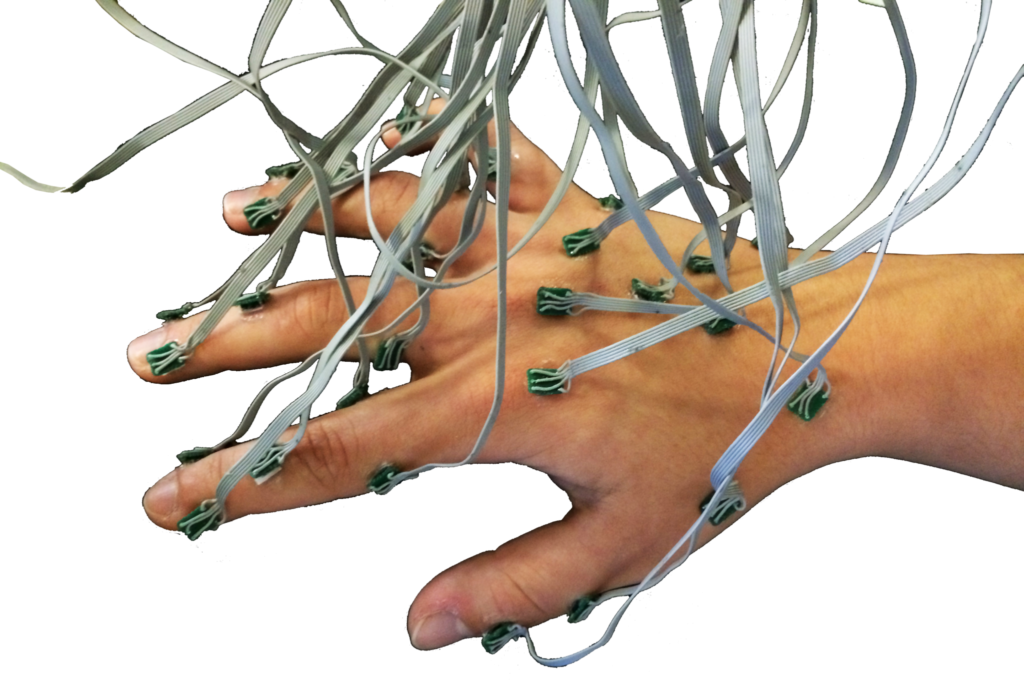 A photo of the apparatus used to conduct measurements, consisting of 30 accelerometers, or vibration sensors. Courtesy of Yitian Shao

Yitian Shao, a Ph.D. candidate in the Department of Electrical and Computer Engineering and lead author of a paper published in Science Advances, is asking questions about how the mechanism the hand employs in producing mechanical signals relates to the sensation of touch.

With the use of an apparatus, the researcher and his collaborators captured the tactile signals of various common actions as the vibrations from these reverberate across the entire hand.

“[Through] this research, we find that the anatomical biomechanics of our hand actually plays a role in efficiently encoding the tactile signals that facilitate our perception of touch,” Shao said in an interview.

When the hand comes into physical contact with an object, this contact produces mechanical waves, which manifest in the form of skin vibrations. These vibrations propagate from the original point of contact outward.

“Based on this mechanism, we design or customize a device that consists of many extra accelerometers, which are basically sensors that can pick up the vibration of the skin,” Shao said.

The result of this was a device which consisted of 30 vibration sensors and which were attached to the hands of the participants in their initial study. These sensors all possessed “a frequency bandwidth overlapping the entire human tactile frequency range.”

Participants were equipped with the device. The researchers then asked them to perform a number of “everyday hand interactions.”

For each interaction, Shao and his collaborators obtained data on the vibratory responses to each particular interaction, which were measured through observed skin vibrations. These observations were compiled in a large database, and initially were used to review the “distribution of the types of signals in the hands,” Shao said.

“In this current paper, we focused more on the analysis of the technical information … to extract the fundamental structures of the type of signal.”

Pictured above are the dynamic spatial patterns of the representations of tactile signals captured by the apparatus. Courtesy of Yitian Shao

“We can use this information to classify the hand detection and still achieve a relatively high classification rate of 95%,” Shao said.

The representations served as “efficient encoding mechanisms” and spatially correlated to the anatomical structure of the hand. It was found through further analysis that the representations also accurately showed the “physics of the wave mechanics in the skin.”

“This result actually suggests that the skin biomechanics actually may play a role in efficiently encoding the type of information in your hands. That’s a major discovery of the paper,” Shao said.

The model used to lower the dimensionality of the signal draws its lineage to other models developed by researchers studying photoreceptors in the eyes, which similarly are tasked with stimulating the process which turns light into something interpretable by the brain.

Now, with data from the two previous papers to work with, Shao and his collaborators are developing new normal haptic feedback devices to reproduce the tactile sensations in the hand. However, doing so is proving difficult.

“I’m actually facing many challenges because of the complexity of the tactile signals and also like I mentioned, we found in the prior research that the skin biomechanics, the biomechanics of hands actually play a complex role in shaping the types of signals,” Shao said.

Ultimately, Shao anticipates that these findings will add to a growing body of knowledge employed in the development of novel tactile sensing devices.

“Those devices can be used, for example, for prosthetic limbs, for people that are amputees, or it can be used or developed to have normal sensing technology for robots, especially humanoid ones,” Shao said.