The Daily Nexus
Virtual Reality
ZOOMing in on the Effects of Digital Education
May 7, 2020 at 8:00 am by Peter Figueira

Pre-recorded lectures, an entire educational system at the tips of my fingers and a — Minecraft virtual background? For five grand? 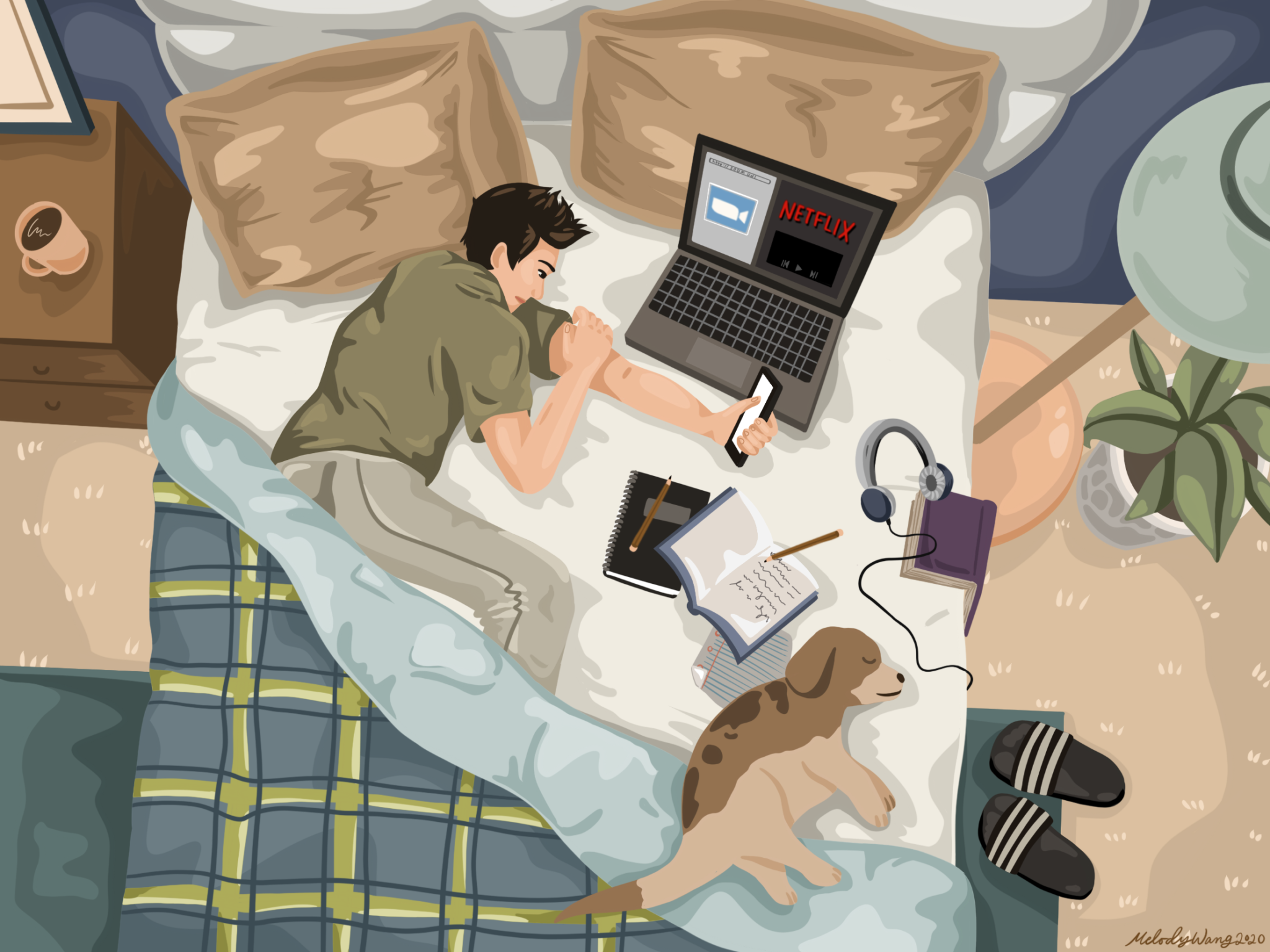 If you had told me five years ago that, in 2020, I would be living through one of the worst pandemics in modern history, I would have thought you were just as crazy as the people who believed the world was going to end in 2012. Yet, here we are, living through COVID-19, and the effects of the coronavirus have not only enacted massive social changes but have also caused a drastic change in the educational system.

Chancellor Henry T. Yang closed the doors of UC Santa Barbara and converted in-person classes to online remote instruction. Learning is now a mere click away. No need to climb out of bed, bike to class and hope to get a good seat. Nowadays, I just sleep big-spoon style with my laptop, flip the screen onto a Zoom meeting, garnish my webcam with a Minecraft virtual background and learn the exact same concepts the professor would have been explaining in a lecture hall — except I’m at home.

Yet the creativity of many students has sparked support, laughter, shock and several memes as Zoom experiences become ubiquitous across the internet. Although there are many advantages and disadvantages of the digital switch, I found about three of each category that encapsulate the polarity of short-term effects.

The new system allows for maximum flexibility; a student can study anytime and anywhere, such as inside their home obviously, and review recorded lectures as many times as they want. Another advantage is more individual attention and confidence. Have you ever felt like your question might be too dumb to blurt out in front of your peers? Well, since all interactions are now conducted through screens, that fear is much less of a deterrent.

Finally, online classes help you meet interesting people. The number of personalities that a single Zoom meeting projects is staggering. I have seen backgrounds that show a favorite Nickelodeon show setting, I have seen pets of all shapes and sizes (one student had a pet parasitic flatworm named Gary), but most importantly, I see you. I see individuals who probably shared a class with me in Phelps or Campbell Hall, and yet I never knew they existed. What were the backs of heads are now the faces of people.

However, online learning also presents certain challenges. At first, I thought, “How could there be any disadvantage to staying at home and learning when I want to?” Well, believe it or not, online classes require more time than on-campus courses. Since typing can be much slower than speaking, typing out questions for your professor and/or TA might take up more of your time. Also, many students are now reading significantly more than they were during standard class instruction.

Another disadvantage is the sense of isolation. I know a handful of people who need to be in a social setting to study, who cannot focus without the subtle whispers in the library or giggles in a study room. Also, there isn’t much external support in an online environment. In a muted Zoom meeting, no one can hear you scream.

Finally, the most significant disadvantage of online education from home is procrastination. Procrastination has become a practical skill in the minds of many college students. Despite many working on fixing this bad habit of waiting to start assignments until the final hour, the new online environment makes it doubly challenging to overcome this habit and get stuff done without a set schedule.

What were the backs of heads are now the faces of people.

There are mixed reviews related to the change from in-person lectures to online classes. However, the short-term effects are manageable and as time progresses students become more accustomed to the new norm.

But what will happen as lectures linger in the online realm, and students begin to realize that in-person conferences weren’t as necessary as they seemed to be?

This could potentially cause an increase in dropout rates. A 2011 study from Columbia University’s Community College Research Center (CCRC) showed that community college students from Washington were more likely to drop from online courses than traditional ones. In fact, the completion rate of conventional classes was 90%, while online classes saw a rate of 82%. Furthermore, the study also showed that students who took online courses were less likely to transfer to another college or complete a degree altogether. By just taking one online class during the fall, the students from the CCRC study were 34% more likely to drop out after a single year, compared to 26% taking traditional courses.

With just one online class, the chances of dropping out increased by 8%. Can you imagine how an entirely online curriculum will affect the higher educational system?

Considering all of this, I believe that the greatest effect of the switch to online education will be adjustments to student tuition.

The realization that I can learn the same amount of information from my bed as in a lecture hall makes me wonder if I really need to be paying so much to earn my degree from a prestigious university, and I’m not the only one. Students across the world have the same concerns about the lack of a tuition adjustment in the wake of the complete change in curriculum.

In a muted Zoom meeting, no one can hear you scream.

On its own, the price to attend a UC is gobsmacking compared to a community college. Of course, the large price tag assumes you are receiving an estimable education at one of the top research institutions in the nation. However, nobody is on campus anymore! And we won’t be there anytime soon, as Chancellor Yang has already informed students that summer courses beginning in June and July will be online.

Quite frankly, I feel bad for those paying out-of-state tuition; non-residents who are paying over 15 grand to have online classes. No amount of Zoom is worth that much. Something has to be done with the current state of tuition. A petition was formed in response to adjusting the spring 2020 tuition here at UCSB with the hope that Chancellor Yang would take notice.

Despite receiving over 6,000 signatures on the petition, and despite having to lock myself indoors, watch Zoom lectures throughout the week and learn from a laptop, the tuition I pay is precisely the same. I genuinely believe that in the long run, students will realize that their experience with online classes was relatively close to learning face to face with a professor and that paying the same price for Zoom lectures at home instead of an actual learning environment (on campus) is inequitable.

Sooner or later, the changes caused by the online transition will start to mold the fabric of higher education. With some students already realizing the unfairness of the current tuition situation, only time will reveal the true lasting effects of digital learning.

Peter Figueira is seriously worried about what will happen as digital education becomes the norm.

The research apparently says that in the past, students taking online classes were more apt to drop out, not complete a degree etc. but perhaps there are other reasons for the poor outcomes. Finances, childcare juggling, erratic job hours, etc. are just a few of the reasons why a student may choose to take online classes in the first place and changes in one or more of those reasons may in fact be the actual reason(s) why they didn’t complete the class. The online class itself may not be the problem. Off the top of my head, as an example… Read more »