The Daily Nexus
Science & Tech
Red Tide, Blue Waves: Bioluminescence in Southern California Beaches
May 6, 2020 at 9:00 am by Leon Liu 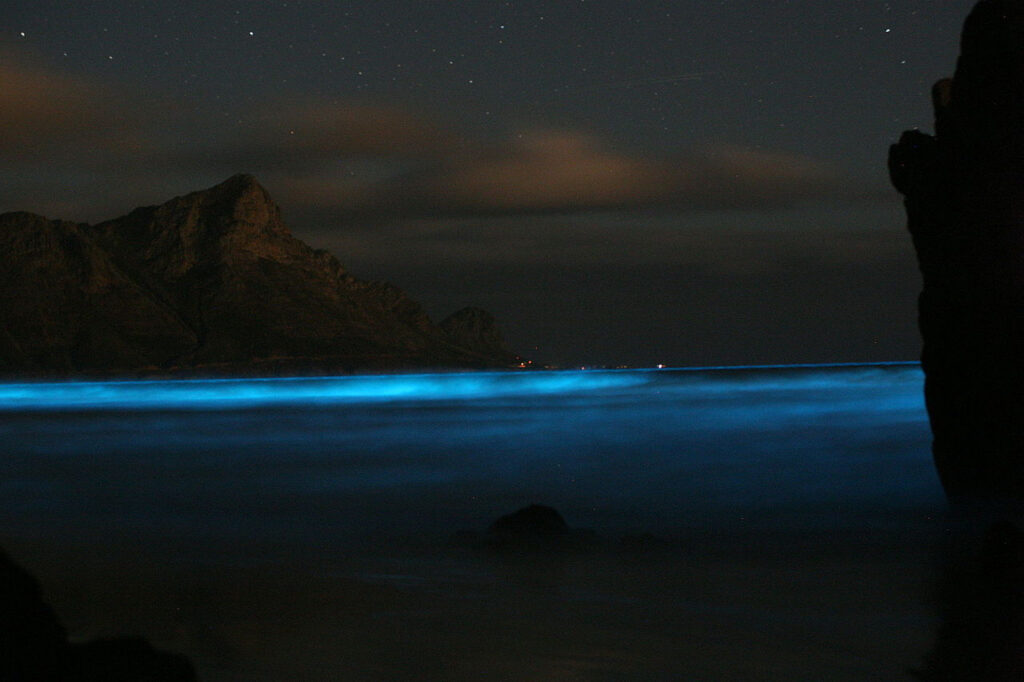 This bioluminescence, caused by the phytoplankton Lingulodinium polyedra, occurs annually during springtime. Courtesy of Wikimedia Commons

With water that is a murky brown by day and a brilliant electric blue by night, many beaches in Southern California have been reporting bioluminescent waves crashing against the coastline.

The phenomenon was first detected off of Scripps Pier in San Diego on March 25 and has gradually spread north ever since, eventually reaching Santa Barbara beaches at the end of April.

This bioluminescence, caused by the phytoplankton Lingulodinium polyedra, occurs annually during springtime as surface waters are abnormally warm as a result of rainfall. These organisms utilize the light-emitting compound luciferin to generate brief pulses of light as a natural defense mechanism to frighten predators. Luciferin is used across the living world by several bioluminescent organisms such as fireflies, according to the National Center for Biotechnology Information.

L. polyedra comes from a specific class of phytoplankton called dinoflagellates, which make up the most common source of surface water bioluminescence, according to the Latz Laboratory at UC San Diego’s Scripps Institution of Oceanography. Dinoflagellates are single-celled protists that predominantly reside in marine environments.

Algal blooms that result from the dramatic increase of dinoflagellate counts in certain areas are commonly referred to as red tides, which are known to deplete coastal waters of oxygen and release neurotoxins that destroy marine life and can be toxic to humans, according to National Geographic. However, the bioluminescent dinoflagellates responsible for generating Southern California’s blue glow do not produce harmful toxins, allowing many surfers to paddle out to the bioluminescence and observe it up close.

Variations in nutrient concentrations and hydrographic conditions may lead to a red tide event. In many cases, a red tide can reach a density of over 20 million dinoflagellates per liter of seawater, according to the Scripps Institution of Oceanography. Red tides are almost always composed of the same species of dinoflagellates, such as the L. polyedra that produce bioluminescence.

Researchers at the Scripps Institution of Oceanography explained the phenomenon on a molecular level. Marine biologist Michael Latz used an atomic force microscope to pinpoint the trigger for the bioluminescence: a small pressure force exerted at a high stimulation speed. This explained how disturbances such as waves or a breaching animal would yield a luminescent response, but gentle forces like wind and ocean currents often go unnoticed.

In Isla Vista, the bioluminescence is best seen around Devereux Beach, located just past the end of the 68 block of Del Playa Drive. The algae is most visible a couple hours after sunset, when the last traces of sunlight have subsided but the surface water has yet to cool down completely. A surfboard or kayak may be needed to go far enough offshore to see the spectacle.