The coronavirus pandemic has wiped clean many aspects of what used to account for a normal day at UC Santa Barbara. Classes are now held digitally, dorms have hollowed out and many students — once integral to the university’s workforce — are now without jobs. 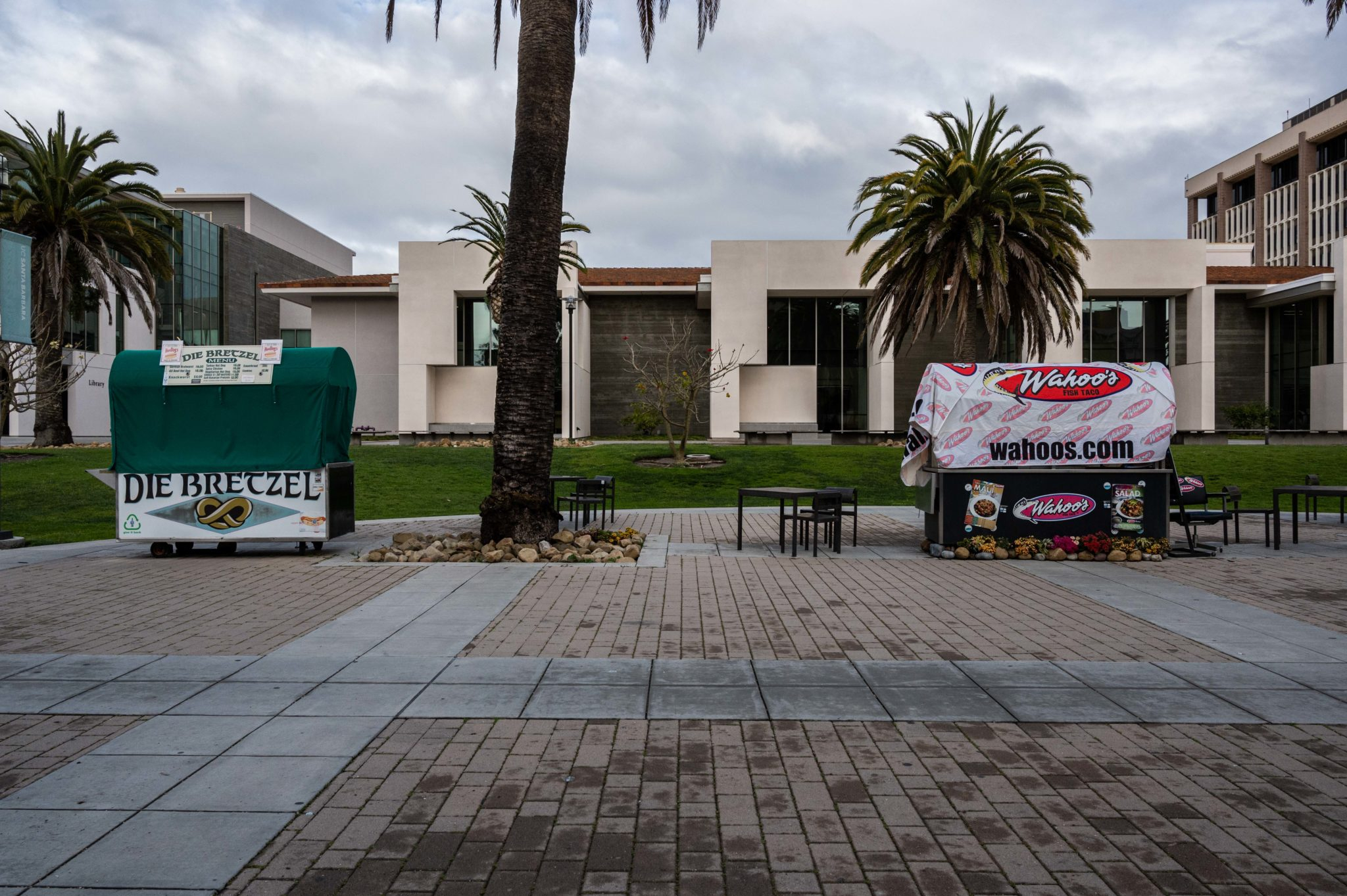 In an effort to ease some of the financial uncertainty brought forth by the coronavirus pandemic, UC President Janet Napolitano issued an executive order on March 16 to extend all UC employees’ paid administrative leave. Full-time employees are eligible for 128 hours of paid leave, while part-time employees are receiving a proportional amount.

But for many student employees who send money home to support their families or juggle multiple jobs to pay their way through college, paid administrative leave or remote work study isn’t enough.

Stevie Mendoza, a second-year sociology major who worked at the Carrillo Dining Commons, is experiencing this firsthand.

“After I pay rent, I always have a little extra money, and I don’t spend a lot of money on food, being able to eat at Carrillo, so I keep a little extra cash and send it back home to help out,” Mendoza said. “I’m really stressed out because I help my parents with money for their phone bills and utilities, and [I] have always been able to help out.”

Mendoza said she was frustrated by the ambivalence of the dining commons’ upper management, who at first assured the student workers that “we would keep our jobs” after news that spring quarter would be held remotely began to circulate.

That quickly changed, however. “A lot of people were waiting on canceling their housing contracts to work, and then they waited to tell us that, ‘Oh yeah, by the way, you no longer have a job.’”

According to UCSB Spokesperson Andrea Estrada, “Campus Dining has not let any student employees go” for good.

Mendoza said she is unable to go home and has to stay in I.V. and pay rent but is now out of a job. Though her employment may be restored in the future, researchers predict that a return to normalcy could be months away, The Atlantic reported. With few options left, Medoza filed for unemployment.

“Now I don’t even have an income for myself. So it’s not only scary for me but scary for my family back home. There’s no income for me to pay rent and I’m just working off my savings, which I’m lucky I have as a college student,” Mendoza said.

“But I also don’t have enough to help [my parents] anymore,” she added. “And my mom lost her job, too.”

Mendoza is not alone. JoAnn Vo, a second-year biology major and an usher for Arts and Lectures, learned she had lost her job after reading a chain of emails sent out to Arts and Lectures employees.

“I didn’t hear anything about losing my job until they sent an email out,” Vo said. “First it was an email like, ‘We’re canceling all events.’ And then there was a second email [adding], ‘Oh, we’re also firing the entire student department.’”

Vo, like Mendoza, also felt that the upper management of Arts and Lectures was “very opaque” in its communication with students and poorly conveyed how students would be affected. Though she is now home and looking for a new job, Vo said Arts and Lectures did say it was offering online positions for the time being but has not made a decision on rehiring students for on-campus jobs in the future.

“I think [the students] who got the worst out of all of it were those who worked at the dining commons,” Vo said. “I’m kind of glad I had my position, to be honest.”

The Thunderdome, much like the dining commons, the University Library and most dorms, is now an echo chamber. With all UCSB sports canceled for the rest of the year and the NCAA season cut short, few employees are left to maintain the Thunderdome’s glossy hardwood floor, according to Denice Barba-Medina, a second-year sociology major who works at the Thunderdome.

“It was a really fun job. We got to watch events, like the basketball games, and then afterwards cleaned up and made sure the Thunderdome was ready for whatever other events we have,” she said. “I guess you could say we’re kind of glorified janitors.”

Unlike Vo’s and Mendoza’s experiences with the upper management of their respective employers, Barba-Medina appreciated the lengths to which her bosses tried to give her hours.

“My supervisors are awesome and so is the manager. They were trying to find whatever hours they could to scrape up so that way whoever does decide to stay on campus can work, maybe like 10 to 15 hours per pay period,” she said.

Barba-Medina, who lived in San Rafael Residence Hall, said she ultimately took the housing reimbursement and went home, foregoing her job at the Thunderdome and her income. But “we’re not completely laid off,” she said, adding that “we just don’t have the ability to work remotely.”

Although she plans to return to her job when she can, Barba-Medina said she is grateful to be at home and acknowledges that “I’m coming from a place of privilege, and even if I didn’t get anything back, I know I’d be okay.”

“My parents are pretty good right now. They weren’t hit too hard. My mom is a stay-at-home mom, but my dad is a truck driver. So for him, he’s been working a ton right now because he’s one of those essential jobs at the moment,” she said.

But money aside, Barba-Medina said she, like many other students at UCSB, is saddened by the abrupt loss of celebrations and goodbyes, many of which she was looking forward to before her fellow coworkers graduated. With social distancing and stay-at-home orders in place, however, those opportunities have vanished.

“I feel like I still haven’t wrapped my head around everything that just happened,” Barba-Medina said. “But I think we all have to find comfort in that it’s not just us, literally everyone around the world is going through the same thing.”

You probably shouldn’t be paying rent right now if you’re out of a job. Newsom banned evictions so you can basically stay rent free for the time being. Also the threats from landlords about breaking your lease are probably overblown. You might not get your security deposit back, but beyond that, there’s not much they can do.