Researchers with Tongji University in China and Ohio State University, in collaboration with a UCSB professor in the Earth science department, David Lea, have been unearthing layers of prehistoric mud hundreds of thousands of years in the making, with the aim of understanding the climatic history of the tropical Pacific.

Their findings and modeling are documented in a paper published in the Proceedings of the National Academy of Sciences, and are part of ongoing research that hopes to understand the effect changes in climate may have on the El Niño-Southern Oscillation (ENSO). 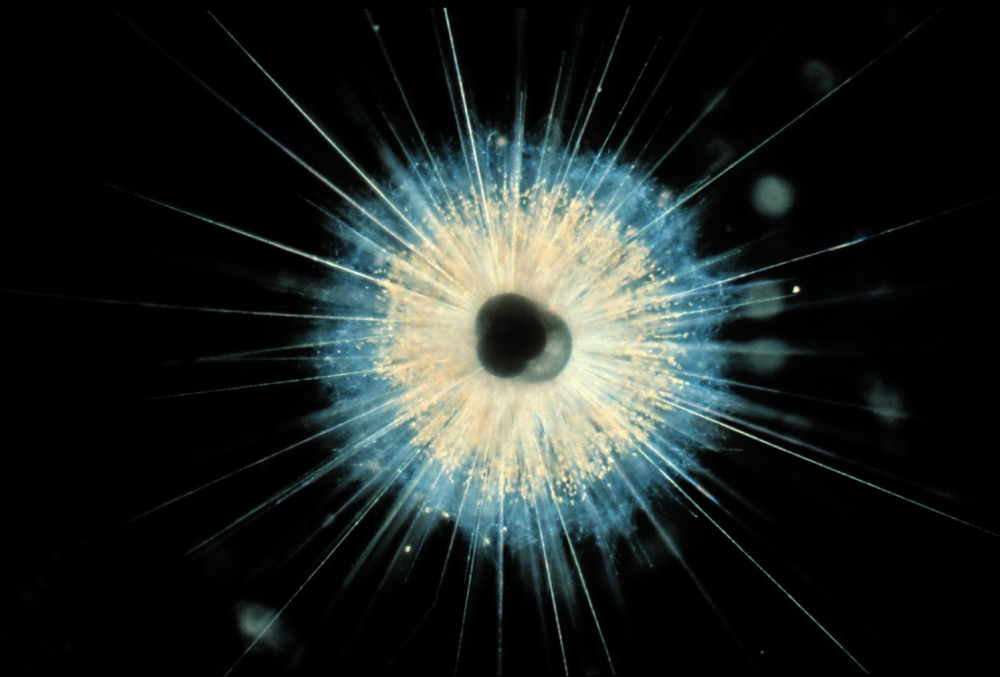 A live planktonic foraminifera, Globigerinoides ruber, that the researchers used in the study, for surface waters. Courtesy of David Lea

El Niño and La Niña, the colloquial terms for ENSO, are modes that develop in the tropical Pacific, resulting in interannual shifts in temperature. These shifts are caused by a linkage between winds blowing over the Pacific Ocean, and the structure of the Pacific itself.

As Lea put it, “the idea in this paper is demonstrating that that kind of coupling occurred in the past in a very distinct way. That might have played a role in modulating climate change on these longer thousands of years timescales.”

“This study, believe it or not, goes back actually to the early part of the decade in the 2000s … Basically my role was to share a methodology where we could measure a magnesium to calcium ratio, which tracks with the temperature of the water,” said Lea, who pioneered this technique in the 1990s and early 2000s.

When microscopic plankton form their shells, the ratio of magnesium to calcium which they incorporate depends on the temperature of the water that they are in. In the 1990s, Lea realized that one could capitalize on this marker of temperature. Researchers could use it to reconstruct past climatic conditions in the ocean, specifically by examining the shells that have sunk down to the seabed layer by layer, over eons.

“Most of my career has been focused on reconstructing climate records from the past. And most of that is focused on deposits from the ocean. The idea is that we can retrieve cores from the ocean, which are basically columns of mud,” Lea said.

The researchers collected one such core: MD01-2386, in the Western equatorial Pacific, near Indonesia.

“There’s a really critical, emerging question about how the tropical Pacific will respond to global warming.”

The most common way for researchers to attempt to address this question is through climate modeling experiments using climate data from the past. This research in particular focused on how the thermocline, the layer of water existing as an intermediate between the sea surface and colder, deeper subsurface of the ocean, changes over a geologic time scale.

“It’s a region of interest because it couples the deep, cold ocean to the warm surface ocean. And that coupling is very, very strong in that Eastern part of the Pacific near Galapagos.”

The thermocline near the Galapagos is also much shallower than regions further to the west, meaning that changes in depth result in much greater comparative changes in temperature.

“The Eastern and Western Pacific have a very, very pronounced asymmetry. They’re very different. If you go to the Galapagos, which is right on the equator … the water can be quite cold. Whereas in the Western Pacific, you’ll find that the water’s always warm,” Lea said.

Through modeling, the researchers were aiming to better understand how change in the thermocline over time can affect this discrepancy between the warm, Western part of the Pacific and the cold, Eastern part.

Analyses of MD01-2386 — and modeling using these analyses as a foundation — revealed that the thermocline, over millennia, exhibits much more variable temperatures than the sea surface appears to.

“There are different ways you can explain that. But one hypothesis would be that the surface responds largely to the atmosphere and changes in the greenhouse effect, whereas the subsurface is changing more due to oceanographic mechanisms such as the [ENSO] phenomenon,” Lea said.

“That there’s a greater variability in the deeper waters suggests there’s a strong dynamic coupling — meaning the way the ocean circulates is changing. The surface is much more regular in its variability, because it’s probably responding mainly to atmospheric processes.”

Now, the researchers plan to test this hypothesis by finding new cores and — if their analysis holds water — observe how these cores conform to the existing models.

“One of the best tools we have for this kind of research is to try to verify the modes of variability we observe in different parts and different sites,” Lea said.

However, existing data is already promising.

“We did make a comparison with the core I’d studied from the Galapagos region early on, and there was some tantalizing evidence, but in an ideal circumstance, what you’d want is multiple records from different sites in the Western Pacific where you could test these correlations.”