The Santa Barbara County Public Health Department confirmed the first case of coronavirus in Isla Vista on Monday evening, as the total number of diagnosed cases within the county went up to 88 — a 20-case jump from yesterday’s count. 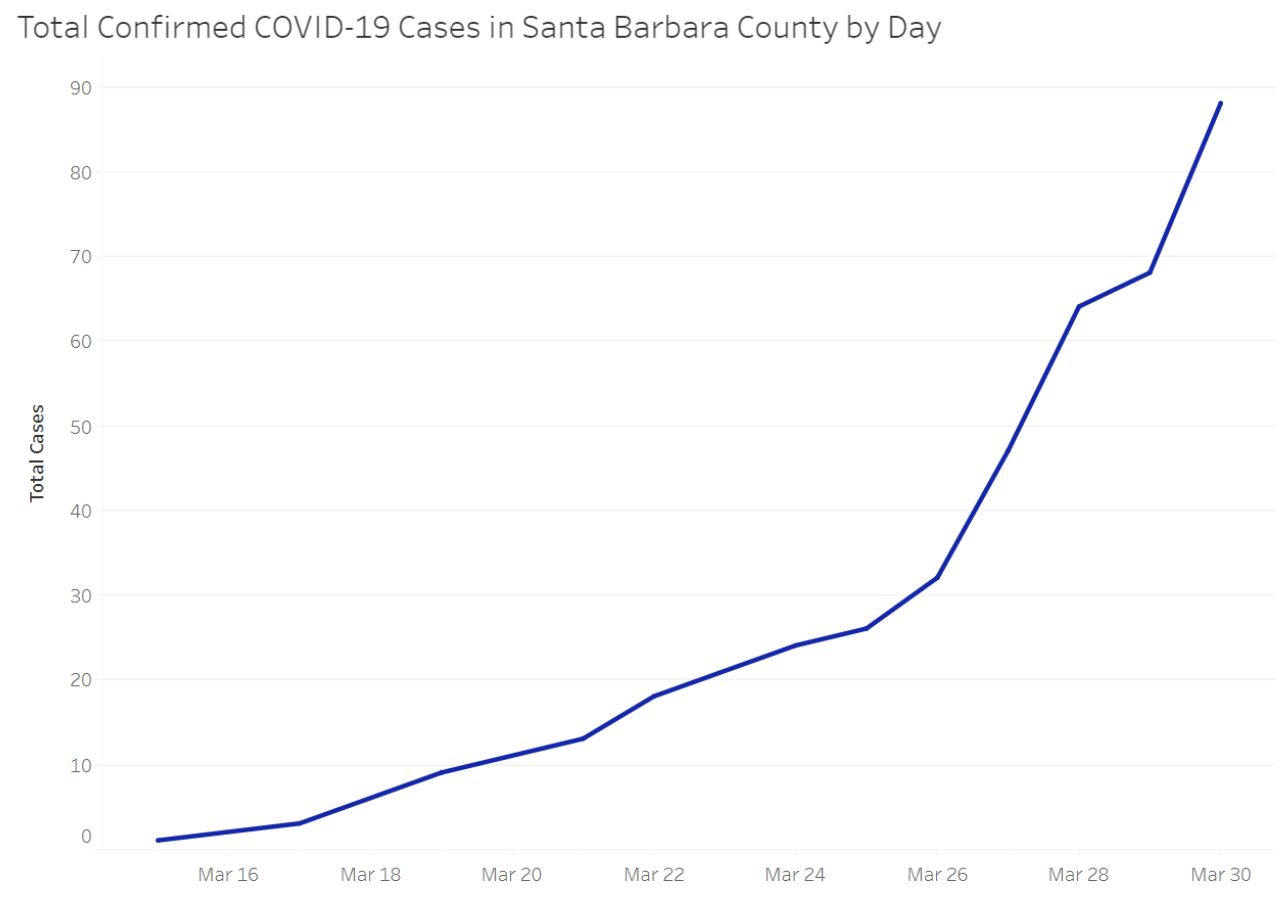 Chancellor Henry T. Yang sent out an email Tuesday afternoon notifying students about the case in Isla Vista, adding that the case was “a previously confirmed case of COVID-19 [which] was found to be located within the boundaries of the Isla Vista community” after the Santa Barbara County Public Health Department began using GIS mapping to identify confirmed cases.

“We have no indication that this case involves anyone affiliated with UC Santa Barbara, but given the proximity of Isla Vista to campus, the number of our students who live in Isla Vista, and our faculty and staff who live in Isla Vista or adjacent communities, we wanted to notify our campus community of this development,” Yang wrote.

Yang also added that two people affiliated with UCSB who live together tested positive for coronavirus after one returned from Europe on March 13.

At the Monday afternoon press conference, Henning Ansorg, the Santa Barbara Public Health Department public health officer, said the rise in cases in Santa Barbara County had been expected by the department.

“The increase in numbers is very typical for a virus that spreads quickly from person to person. We expected a doubling of cases within three days and that is almost exactly what we have seen,” Ansorg said. “It is an indicator of just how infectious this thing is.”

In order to slow the continued rise of cases and mitigate the spread of the virus, Ansorg also emphasized the necessity of social distancing.

“The only definitive factor which makes a substantial difference between the best and worst case scenario is how much community members stay physically isolated from each other. Continuing with our current efforts of social distancing will make all the difference,” Ansorg said.

While Ansorg did not specifically mention the I.V. case during the conference, it was announced about two hours later through the Santa Barbara Public Health Department Twitter account.

Prior to the confirmation of an I.V. coronavirus case, the Isla Vista Community Services District (I.V. CSD) issued a state of emergency in I.V. at its March 24 virtual meeting, strongly urging the county to “to take all necessary actions to slow the spread of COVID-19.”

“Now that we have a case of COVID-19 in Isla Vista, it is time for Isla Vistans to take social distancing seriously. This is a public health crisis that will affect not just our older folks — it will affect student-aged individuals too,” I.V. CSD Board President Spencer Brandt said in an interview on Monday.

In accordance with federal, state and local mandates ordering social distancing and banning gatherings of more than 10 people, the district also urged Isla Vistans at its meeting to avoid any mass gatherings, including Deltopia — the yearly unsanctioned street party held on the first weekend of spring quarter.

“I think that if Deltopia takes place, that could be catastrophic for our public health system. Our public resources are almost entirely devoted to fighting this public health crisis right now, at the county, state and all the way to the local level down to us here in Isla Vista,” Brandt said.

“It would be very, very inappropriate to use this weekend to break the social distancing order and go out and party.”

UCSB, in accordance with the Santa Barbara County Sheriff’s Office, sent an email to campus organizations on March 12 that discouraged students from participating in Deltopia to help control the spread of the coronavirus.

Here’s the problem you’re facing: Self-entitled mentality coupled w/ the “yolo” mindset. Good luck w/ keeping the idiots in line w/ the necessary precautions, while deemed as “the best & brightest” by their parents, these are people that in most cases are dumber than a bag of rocks. In fact, rumor has it that a bag of rocks IS smarter, but can’t get coronavirus.

Agreed. Coronavirus is gonna rip thru IV like a hungry fat man with a bag of Doritos. These idiots aren’t taking this seriously. The only good thing is that they’ll likely get it and hopefully succumb to it, humanity will be safer without them.

I was at Sands Beach yesterday and there were at least 100 people watching the sunset, while gathering in groups playing frisbee, volleyball, and beer die. Everyone having a great time and NO ONE was social distancing. My neighbors have regular bbq parties and people over for movies at night. YOu can tell there’s a lot of students who came back from spring break and aren’t taking this seriously. I read today that 4 Sheriff’s deputies are now quarantined and there will be possibly more…imagine what Isla Vista will be like when criminals realize no one is patrolling…I hope they… Read more »

ohh dude we are so fucked. I wanna evacuate IV but my home is worse…

I promise it’ll get a lot worse here per capita than anywhere else. With all these clueless and selfish kids who either don’t care or don’t understand that they’re spreading it by hanging out with their friends, they’ll be sharing bongs and giving the virus new homes in their lungs. It’s gonna go thru IV like WILDFIRE. I’ve seen kids partying and hanging out on the beach in groups like it’s nothing. Honestly, I hope they get it because they deserve it.

Can they tell us where these live live and where they have been in isla vista? Like if ur really trying to stop virus from spreading the people who test positive need to speak up so we can stop the spreading.. common people. The media is really scarying everyone. Easy just say their names so we know to stay away from them for awhile.

Have you ever heard of HIPPA laws? It’s not happening, buddy. The media is reporting what’s happening, if you’re scared, you should be. Man up and stay inside, you’ll be okay.

Fool I ain’t ur buddy I’m 31 mother and a wife, let me ask u something do u have children? And I do know the HIPAA laws I’m currently hiv positive currently undectechable… so duh I was trying to say like maybe where he or her have been in contact with i hope they are following guidelines for a positive case… and reason I ask if u have kids have u try being stuck in a house all day everyday with ur kid it’s not as easy as it sounds. But thanks for being a rude person.

Sorry, I’m not stupid enough to bring children into this shitty world. I don’t care about your kids or your stupid problems.

Why are you frequenting a college website? Don’t you have kids to attend to?