The Daily Nexus
News
“I didn’t have any time to say goodbye to anybody”: UCSB Students Lament A Senior Year Cut Short
March 30, 2020 at 12:00 pm by Evelyn Spence

All college students have their treasured traditions — the rites of passage that students remember long after they’ve finished their years at their alma maters, that they reminisce about 20 years later during alumni weekend.

For UC Santa Barbara students, it’s having that first beer at Woodstocks. It’s studying outside in the sun at Cajé, stumbling down Del Playa Drive arm-in-arm with friends during Deltopia, huddling outside Storke Tower at 11 p.m. on a Sunday for the quarterly primal scream.

But for the UCSB class of 2020, and for classes of 2020 worldwide, the loss of an in-person spring quarter and the presence of the coronavirus pandemic have stolen away any last chances for those traditions. 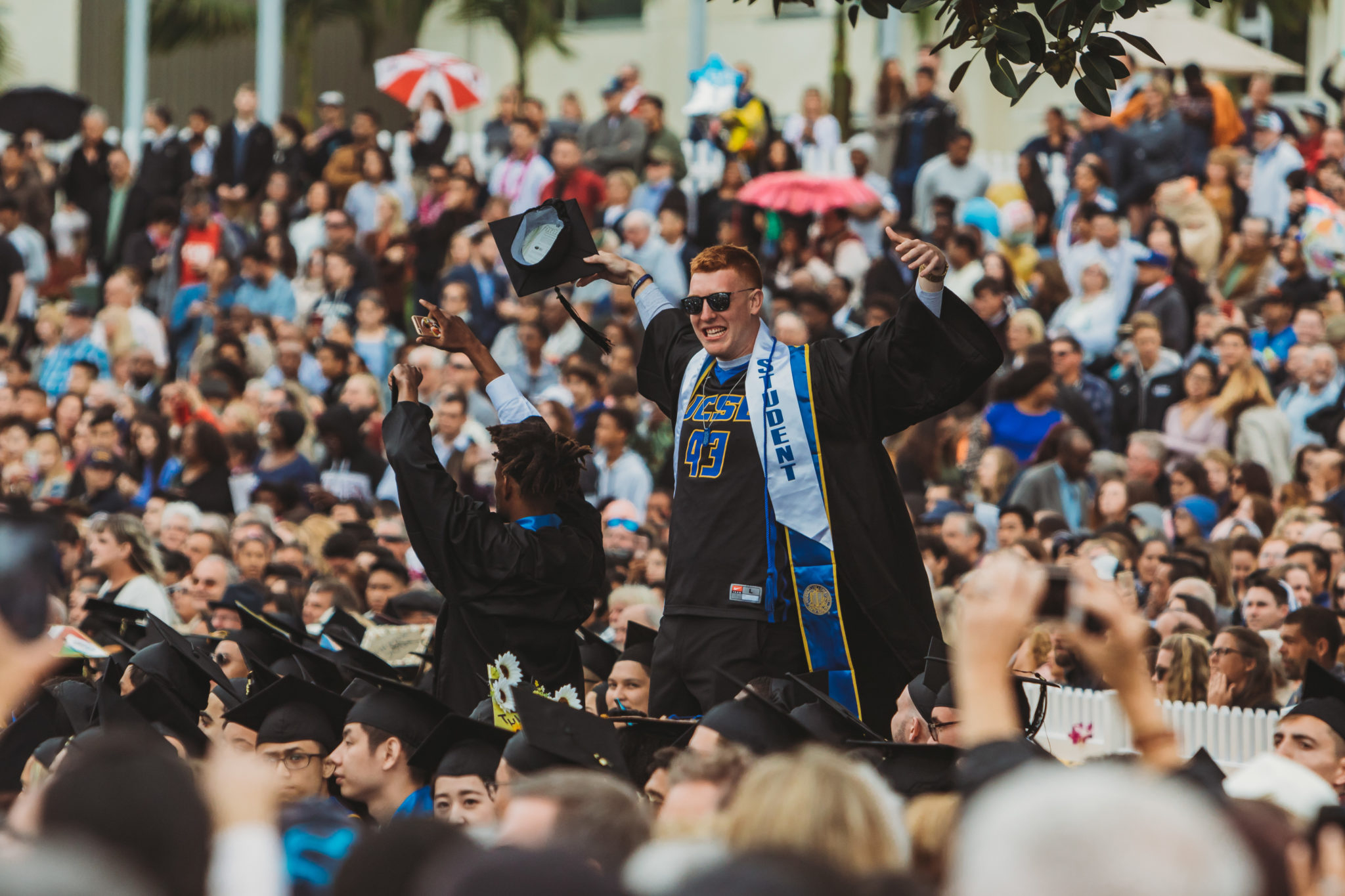 Last week, Chancellor Yang postponed UCSB’s June graduation, stating the university will hold an in-person ceremony “when it is safe to do so.” Nexus file photo

“Walking into a lecture hall isn’t really normal anymore. That’s not going to happen for us,” said Talia Chalhoub, a biopsychology major who will also be graduating with a certificate in technology management. “The fact that [we] can’t walk into Campbell Hall ever again … You can’t just go sit outside at Cajé anymore.”

“There are people that I’m never going to see again,” she added. “I’m pretending that all this has given us is an extra week at home rather than taking away any time we have remaining.”

Chalhoub, who also has a sister graduating from San Diego State University with the class of 2020, said she hopes to return to I.V. during spring quarter. She pays nearly $1,000 a month to live in I.V., and unlike the thousands of UCSB students who lived on-campus and were given the option to sever their dorm leases, it isn’t as easy to back out for Isla Vistans.

Additionally, Chalhoub also lives in a house with 13 housemates, which she said can make it difficult to navigate the logistics of online classes.

“I know some professors might be recording [lectures] and putting them online, in which case you could just put in your headphones and you’ll be fine anywhere. But other professors are having you log on at 9 a.m. during regular class period,” she said.

Chalhoub is one of thousands of UCSB students who are grappling with this unprecedented situation. The university is actively encouraging students to stay away from I.V. if they have already left for their hometowns — warning that the coronavirus can spread quickly in the packed college town — but some seniors are grappling with how to handle their last quarters.

Do they stay in what has now become a “ghost town,” as put by cultural anthropology major Alex Buckley, or do they return to their hometowns and say goodbye to I.V.?

Buckley, who is immunocompromised and works a full-time job while also taking classes, said she was initially excited when she found out that UCSB was transitioning to remote instruction for spring quarter.

“I thought, okay, this might be a great idea. I’m not going to have to worry about going into class. But then once it actually hit me that I wasn’t going to be able to have an actual, last quarter on campus … it made me really sad,” Buckley said.

“I didn’t have any time to say goodbye to anybody. Or even realize that my last day of class, last quarter, was the last class I would ever take on campus.”

Buckley said going home would be easier for her than for her peers, because her parents live in Santa Barbara. But her I.V. landlord “already told us that he’s not letting anybody out of their lease.”

“I don’t have any choice but to stay [in I.V.],” she said. “I would prefer to move and get out of I.V. since there’s nothing here and nothing open anymore.”

She said she considered subletting but hasn’t been able to find anyone actively trying to move into I.V.

Most people, instead, are trying to get out.

“Walking around, Isla Vista is such a ghost town,” she said. “It’s really weird and super quiet. There’s no cars on the street, everyone I know has left and it’s a super weird, eerie feeling.”

For seniors who have already left for their hometowns, such as for English major Jasmine Garcia, their lives are up in the air — it’s unknown if they will be able to return to I.V. and carry out their senior traditions, or how they will handle remote classes.

Garcia, who transferred to UCSB in Fall Quarter 2018, said this next quarter is going to be difficult for her to manage because she won’t have access to in-person campus resources such as Campus Learning Assistance Services.

“[I have to] become independent and find my own ways to get my essays revised,” she said. “I’m an English major, and [this] makes me feel like I don’t have any other support at the moment.”

She added that it felt like her life “completely froze for a second” when she found out that Spring Quarter 2020 would be conducted remotely.

As a transfer, this “leaves me with one and a half years [at UCSB],” Garcia said. “I miss interacting with people and finding new connections … that was the number one thing I actually enjoyed the most [at UCSB].”

Like Garcia, UCSB senior Sierra Hastings has also returned to her hometown. But Hastings finds herself in a unique situation for her last quarter; she’s in the Bachelor of Fine Arts in Theater program, along with nine other people in her senior class — a program that is “a struggle” to teach online.

Hastings said that her professor has been checking in with her class but noted that they’re “at the same kind of loss, like, ‘Oh my god, how are we going to teach theater and dance on a computer?’”

“It’s going to be a different quality than what we would get from being in a classroom. From those physical corrections that you get at the barre or in your acting studio — creating shows together, creating when you are cast in a play — I’m not going to get any of that,” she said.

Hastings said that while she is sad that there won’t be an in-person spring quarter, she knows these measures are meant for the better of UCSB students and the greater community — but she’ll miss the day-to-day activities that being on campus brings.

“All of this is a lot to take in, but at the end of the day, this is the best decision for the community and the world at large,” she said.

She added that her nine-person senior class in the training program has been discussing possibly holding a smaller graduation just for her program.

“We’ve been training together for three years,” Hastings said. “Finding out we wouldn’t be together for our last quarter was heartbreaking.”

Boo hoo, no one cares.

Living in IV for spring quarter would be ridiculous when you can take class online from home. Being in a house with 13 roommates would be extremely irresponsible. Paying $1000 a month is plain stupid. High density slum lording during a pandemic is probably illegal, and at least grossly negligent. These landlords need to get real. Don’t be scared of them. Just stop paying.

This is a ridiculous blanket statement that completely discounts individual circumstances. There are people that have horrible home lives or are international students and don’t have any other option than to return to/remain in IV regardless of how many people they live with. Maybe you’ll have the good sense to consider potential circumstances that you don’t understand next time you roast someone without knowing where they’re coming from.

I’m not a lawyer or counselor, but packing 2 or 3 people in a bedroom defies common sense in a pandemic. Landlords need to cut their occupancy down to normal.

No one cares about your first world problems Becky. Just ask daddy to take care of you, like normal. If you had any idea of how the real world works, you’d realize that your statement is retarded.

The “real world” is over.

Rent strikes are gaining steam around the world.

Last i heard, I still have to pay the mortgage on my rental property. And, my real estate and income taxes have not been forgiven.

Jesus will forgive you.