Mehrdad Homayouni hasn’t stopped making sandwiches since he opened Sam’s To Go in 1981. That’s because the people keep coming back.

But “the whole world is changing,” Homayouni said from the inside of his now-empty store. For the first time since opening Isla Vista’s oldest eatery, he said, customers aren’t returning. 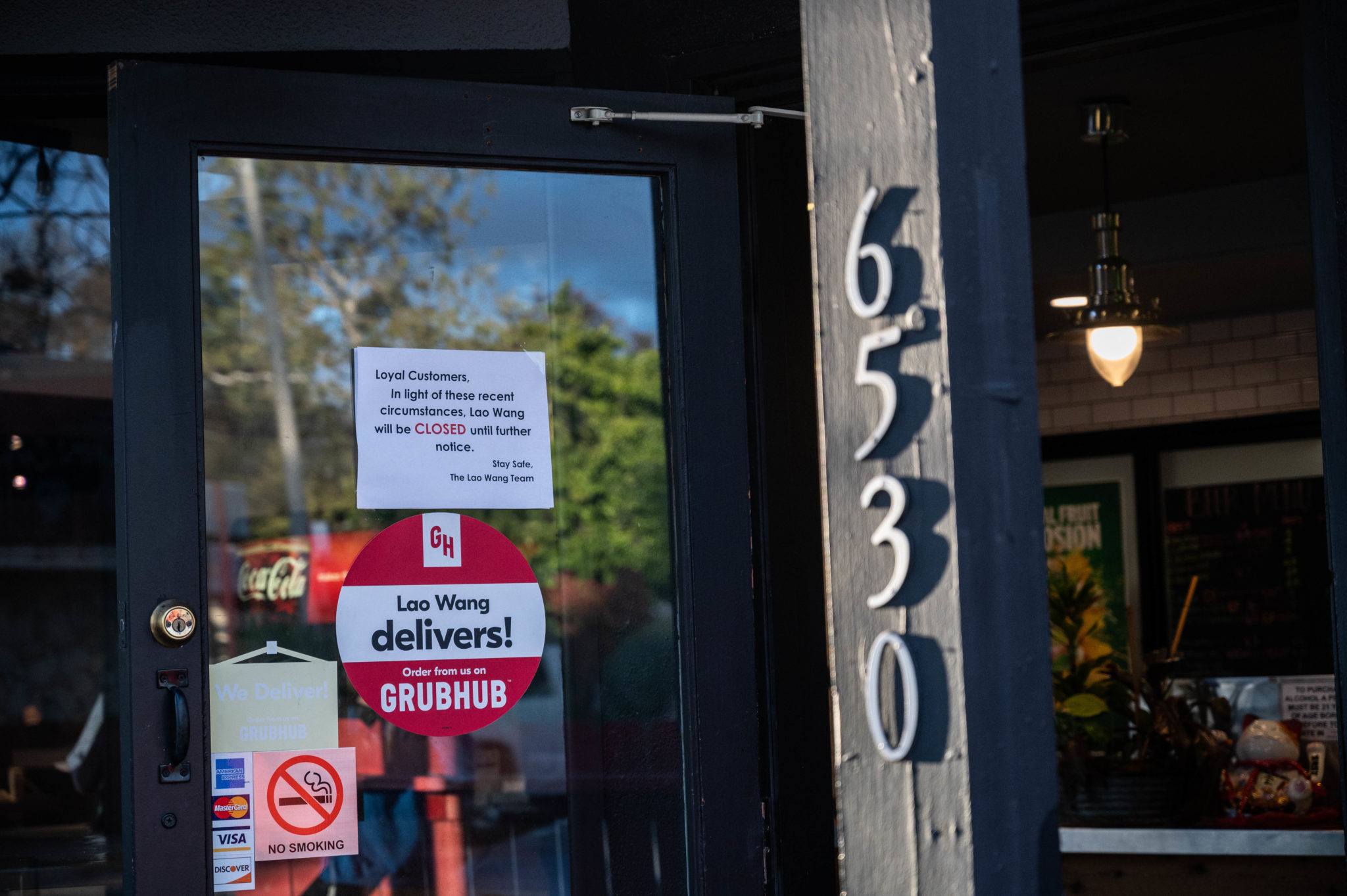 California Governor Gavin Newsom ordered on March 20 that all restaurants in the state are to cease dine-in services and continue business only through take-out or delivery options. Max Abrams / Daily Nexus

Like many other businesses, the coronavirus pandemic has turned Sam’s To Go into a shell of its normal self, deserted by the normal stream of patrons who — for the most part — have no choice but to stay at home.

In an effort to clamp down on the spread of coronavirus, California Governor Gavin Newsom ordered on March 20 that all restaurants in the state are to cease dine-in services and continue business only through take-out or delivery options.

But for restaurants in Isla Vista like Sam’s To Go, forgoing dine-in services can cripple business. Freebirds, a favorite among Isla Vistans, had temporarily closed as of March 24. In a sign taped on the restaurant’s window, the owners said they “hope to reopen soon.”

“During all the other flus, it didn’t affect [business] at all,” Homayouni said, adding that he has lost a large majority of his student employees this time around.

“We stay open as long as we can. And if we don’t [stay open], then we close, like other people,” he said. “We’re just trying to take it day by day. Hopefully, things go back to normal.”

Homayouni said he’s especially worried about Isla Vista’s student population, many of which have left I.V. in favor of riding out the pandemic back in their hometowns. For I.V. store owners like Homayouni, students are crucial for revenue, and their disappearance puts profit margins in the red.

“In Isla Vista, unfortunately, you’re at mercy of the university and the students. We’re not like any other places in Santa Barbara or Goleta, where we’d have ordinary people coming in. So when you depend on the students, it makes it tough for a lot of restaurants,” Homayouni said.

Matt Maida, SOS Liquor’s store manager, said he is looking even further into the future.

“By [April] 1st, people might stay home and not come back,” Maida said.

Like Homayouni, Maida said that SOS Liquor is also concerned about I.V.’s eroding student population. Without them, he said, “we have no business.”

“If not this, then we can go to work at McDonald’s, they’re offering $15 per hour,” he said, adding that he needs the money to pay his rent.

John, the owner of Spudnuts Donuts who declined to give his last name, said business at his store had already diminished by two-thirds.

Since losing most of his student employees — about two-thirds of his workforce — John said he and his remaining staff have had to compensate for the loss.

“We’re lucky we can make ends meet and keep a few of our employees, but it’s still rough,” he said.

Mojo Asian Fusion Cafe has also transitioned to take-out and delivery operations through DoorDash and Uber Eats and is subsidizing orders to lower costs, according to General Manager Boxi Wang. As of late March, Wang said revenue has remained relatively consistent, even though many UCSB students have left I.V.

“While we understand that going through the third-party delivery services may cost more…  we are trying to make deals and coupons to offset those fees, so people can stay home, and they can still get our tea at the same expense,” Wang said.

In light of social distancing practices, some shops have reduced the number of customers that can be in their stores at once. This was the case at Richie’s Barber Shop, where only ten customers were allowed inside at a single time, Richie Ramirez, the store’s owner, said in an Instagram post on March 22.

The barber shop, which has enough seats to serve five customers at once, switched to serving only three customers at a time to give barbers adequate space between each other for social distancing purposes, Ramirez said in the post.

He added that the barber shop was “cleaning chairs/surfaces in between each client” and asked that “if you are showing any symptoms of being sick, to please reschedule your appointment another time.”

As of March 24, however, Ramirez said he had to close both his I.V. and Montecito locations because “it was the safest and right thing to do in order to help contain the spread of the virus.”

Caje’s general manager, Troy Yamasaki, said the coffee shop is being extra careful as well to account for the virus’s two-week incubation period.

In an effort to maintain the health of workers and customers, “we’re going to try to… understand where people are going,” Yamasaki said. If employees leave Isla Vista and choose to come back, Caje will place them in a “holding period” before they can return to work, he added.

Although some young adults may see social distancing and self-isolation as unnecessary, Yamasaki maintains that community members must all play their part to keep I.V. healthy.

“It’s just making sure that [young people] check that privilege and make sure we’re all doing our part to keep the community in mind,” Yamasaki said. “As a community, we [need to] work really hard to limit this to the best of our ability and do our part.”