Last April, an estimated 12,000 to 15,000 day drinkers and partygoers swarmed Del Playa Drive for the annual unsanctioned street party, Deltopia. This yearslong tradition brings thousands of Isla Vista residents, as well as visitors from all over the state, to the college town for daytime ragers and all-out partying. 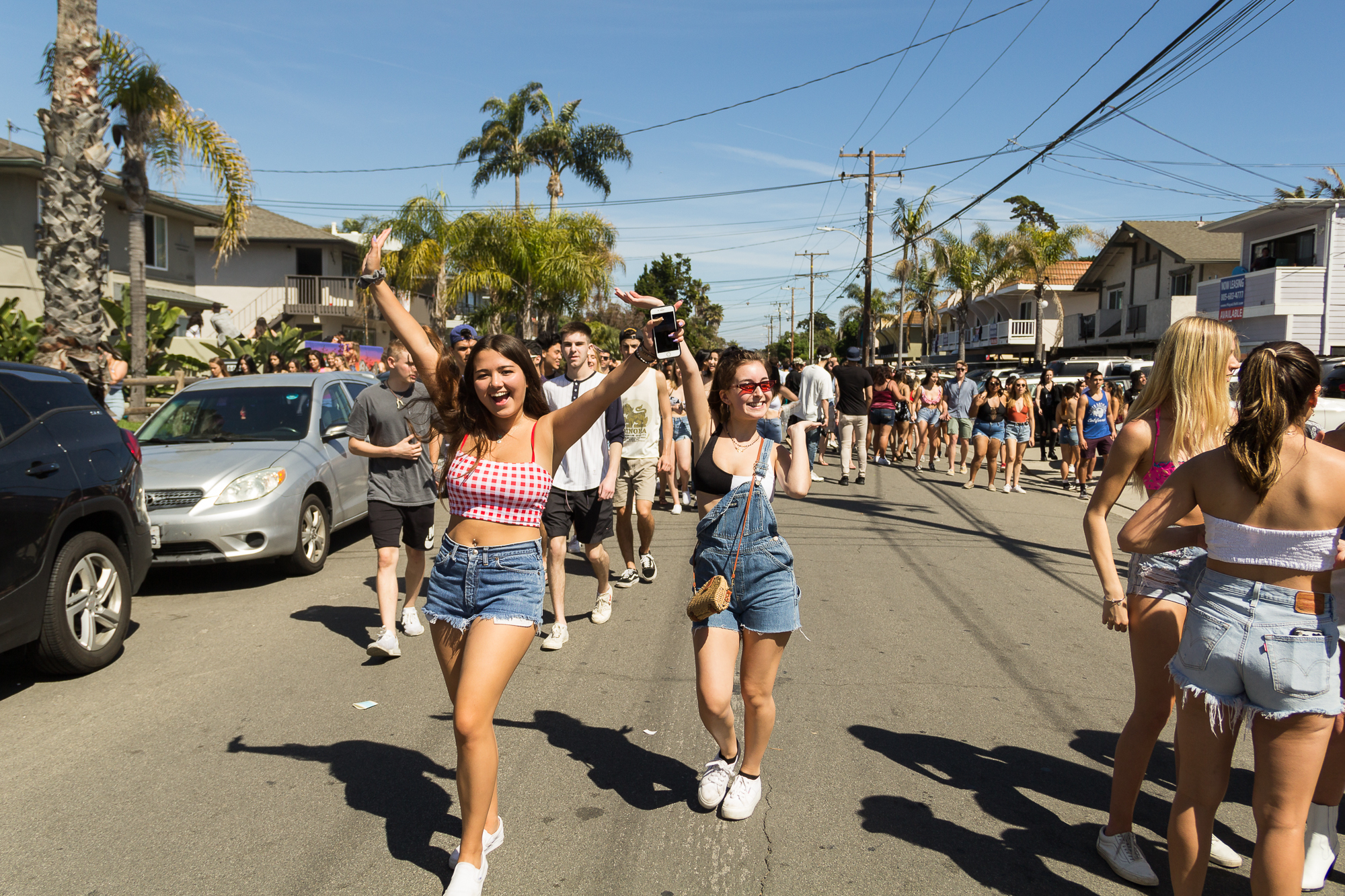 Those who remain behind in I.V. may have to weigh the consequences of choosing between participating in Deltopia or staying home this year.  Leonard Paulasa / Daily Nexus

This year, however, a new concern has taken priority: coronavirus. A California-wide stay-at-home mandate — as well as the countrywide order that no more than 10 people gather in one place — and urges from UC Santa Barbara and the police to keep partying to a minimum in light of the virus have dampened the hopes of students that the long-anticipated yearly celebration could still go on as normal.

Deltopia has historically been a point of contention between the UCSB administration and students: It marks record arrests and police presence and perpetuates a wild party reputation that the administration has worked hard to combat. In previous years, Associated Students Program Board has hosted its own event known as The Warm Up, bringing popular music artists to the campus during Deltopia weekend to offset nighttime crowds in Isla Vista.

In emails sent to university organizations on March 12, the school warned students against participating in Deltopia, announcing that “all other programming during that weekend has been cancelled,” including The Warm-Up and a new, alternative Deltopia daytime festival that had been scheduled to be hosted by the Isla Vista Community Services District.

“The University strongly recommends that students not celebrate during the usual Deltopia weekend,” the email continued.

However, despite the hope that students will choose not to party due to coronavirus concerns, the university and police will continue to implement their usual Deltopia-related restrictions in preparation for possible crowds, according to Katya Armistead, assistant vice chancellor and dean of student life.

“IV Foot patrol has asked for residents living on Del Playa to move their cars, and UCSB has allowed UCSB students to purchase night and weekend permits to park on campus for the extended weekend of Deltopia,” she wrote in an email to the Nexus. “UCSB usually has mutual aid of UCPD from other UC campuses, Associated Students usually has Porta Potties available in IV, and Life of the Party distributes water.”

Raquel Zick, Santa Barbara County Sheriff’s Office spokesperson, also asked potential partygoers to “keep in mind that now is a critical time for us to exercise critical responsibility” by keeping social interaction to a minimum.

Zick said she could not reveal the exact number of police expected to be deployed over Deltopia weekend, from April 4-5, but explained that the department will “build a plan based on what we expect crowd sizes to be and scale up and scale down.”

“We are hopeful crowds will be compliant with crowd order, which is no more than 10 people,” she said. “But, even if people are, how many crowds of 10 are we talking about? It will all depend on how many people choose to participate.”

Last Monday, the presidential administration recommended that “all Americans, including the young and healthy … avoid gathering in groups of more than 10 people” in order to practice social distancing and avoid the spread of coronavirus.

Zick also stressed the extra risks posed to officers who might be required to address Deltopia-related concerns.

“We have the nuance of the COVID-19 as well as the regular hurdles of Deltopia, and hope people understand the situation as these officers required to respond are now putting themselves more at risk for catching the virus, or bringing it home to their families. It only takes one person [to spread the virus],” Zick said.

To address these health concerns, officers will be required to wear more protective gear, including the same N95 masks used to protect medical staff.

Many UCSB students have already chosen to return to their hometowns for spring quarter due to coronavirus concerns and the university’s switch to online classes. However, those who remain behind in I.V. may have to weigh the consequences of choosing between participating in Deltopia and running the risk of spreading or catching coronavirus, or staying home this year.

“I do not think many will attend this year, especially considering the warnings about COVID-19,” Armistead said.

Oh sure asking them not to participate in Deltopia is going to stop them from partying. How stupid it’s going to look like the beaches of Florida and they’ll care only about themselves and continue the party and spread disease. Sick!!