On Thursday, a vigil co-organized by the Student Activist Network and Santa Barbara South Asian Solidarity Collective drew more than 50 community members to Storke Tower to mourn the lives lost in the New Delhi riots. 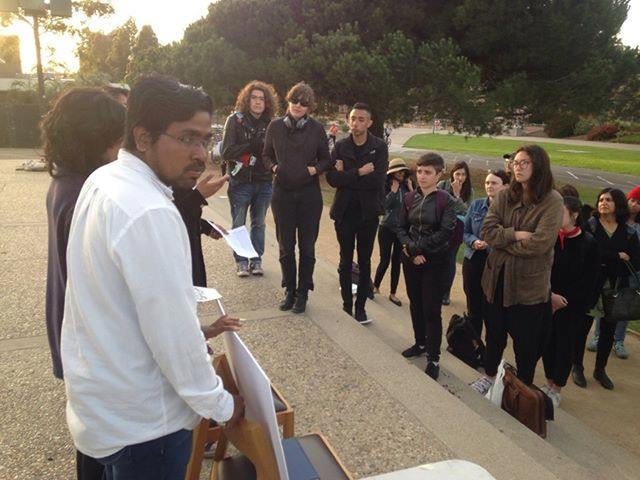 Violence in New Delhi began in late February in response to the Citizenship Amendment Act. Passed by India’s parliamentary system on December 12, the law provides a path to citizenship for immigrants from various religious groups, but does not mention Muslims, according to BBC.

The law has resulted in violent clashes in New Delhi, as well as widespread destruction of public and private property in northeast Delhi, which is home to large Muslim populations, Time reported.

At UCSB, various speakers made statements about the violence and lit candles for the victims at the vigil.

“In short, we are here because Delhi has been burning for the past few days. One could go as far as to say that India has been burning for months,” Pratik Raghu, a member-organizer of the Student Activist Network and a UCSB Ph.D candidate in the Department of Global Studies, said.

This is the worst violence New Delhi has experienced in decades, according to the New York Times; more than 53 people have died.

Speakers at the vigil called on students to not ignore the history of violence against Muslims in India.

“Violence toward Muslims is blatant, aggressive and bloody right now, but we cannot ignore the ways that it has always existed,” Esha Suri, a fourth-year religious studies and environmental studies major, said. “It’s time we start taking notes, showing support, solidarity and honor to Muslim people.”

Will Pulice, president of the Human Rights Watch Club at UCSB, emphasized the role that students have in creating change.

“I think students should care about human rights issues around the world because it is our responsibility. We must advocate for who and what we represent here at UCSB,” Pulice said.

After reading the names of the dead and injured, Raghu urged the crowd to continue reading the news and to donate to verified human rights organizations.

“Things could get a whole lot worse,” he said. “We have a model obligation to ensure that they don’t.”