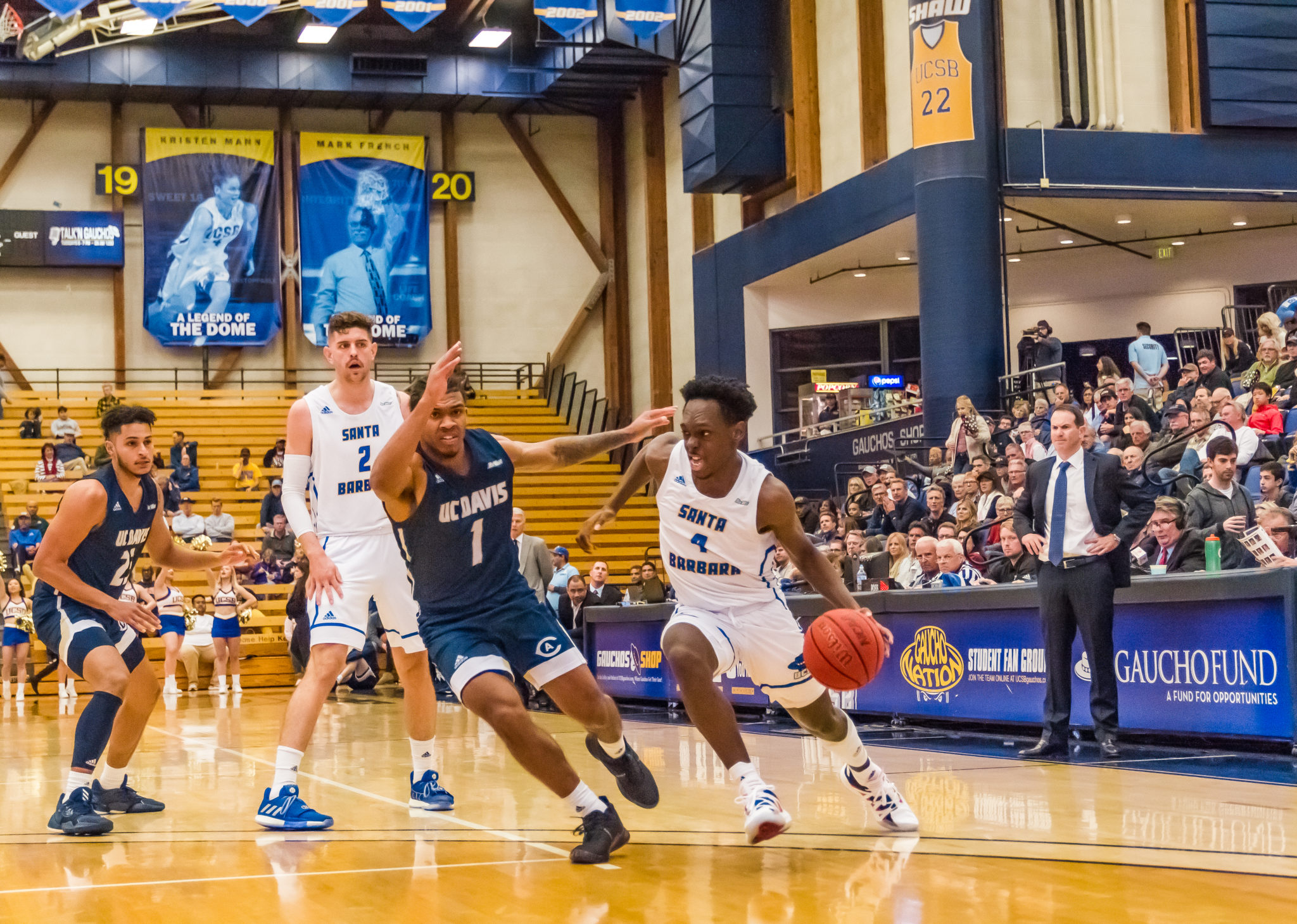 Locked in a three-way tie for second place in the Big West Conference with just two games left in the regular season, the UC Santa Barbara men’s basketball team faces perhaps its most important week of the season.

Two wins, and the Gauchos are assured the second seed in the Big West tournament and a position on the opposite side of the bracket from league-leading UC Irvine. Two losses, and UCSB will likely find itself in third or fourth place, facing a much more difficult path to the championship.

Luckily for the Gauchos, the two teams they have left to play are two of the worst teams in the Big West: Cal State Fullerton, which is 10-19 overall and 5-9 in conference play, and Cal Poly, which is 7-21 and 4-10.

That scheduling luck is a bit misleading, however. Fullerton and Cal Poly do indeed reside at the bottom of the conference standings, but that just means they have more to play for. The worst team in the Big West misses the tournament entirely and the Titans and Mustangs both will do what it takes to avoid that fate.

The Gauchos, then, host two hungry teams this week. First up is Fullerton on Thursday night followed by Cal Poly on Saturday night, which will also serve as Senior Night for UCSB’s three departing players.

UCSB defeated Fullerton on Feb. 20 in a 75-66 game that saw the Gauchos come out hot, then blow the lead, and finally regain the advantage and close out the Titans with a 16-3 run. Senior guard Max Heidegger provided much of the spark for UCSB with 27 points, 7 rebounds 5 five assists and scored 16 of the team’s 41 second-half points.

UCSB felt Heidegger’s absence in their loss to UC Irvine, shooting just 36.8% from the field with only one player scoring in the double digits. Junior guard JaQuori McLaughlin handled much of the scoring load when Heidegger missed 10 games earlier this season and will likely have to take on that role again if the Gauchos are to overcome the loss of their leading scorer.

Saturday’s game was a tough first matchup to be without a player like Heidegger, but if the senior is indeed forced to miss more time with his injury, the competition this week promises to be a bit friendlier.

Fullerton is a middle-of-the-pack defensive team in the Big West, surrendering the fourth-most points per game while holding opponents to the fourth-lowest shooting percentage in the league. The Gauchos’ experience in their first matchup with the Titans bears out the statistical observations: UCSB shot a solid 45.6% from the field and scored 75 points, both fairly typical totals for the team this season.

On offense, Fullerton has two of the top five scorers in the Big West in senior guard Brandon Kamga and senior forward Jackson Rowe. Kamga and Rowe combined for 38 of the Titans’ 66 points in their first game against UCSB and will almost certainly be the Gauchos’ top defensive priorities once again on Thursday.

The same can be said for Cal Poly and UCSB. The Mustangs have lost five games in a row heading into their matchup with the Gauchos, a losing streak that has kept them in the Big West cellar.

UCSB and Cal Poly opened up Big West play against each other all the way back on Jan. 8, so it’s only fitting that they’ll close their regular season against each other almost two months later. That first matchup was a 63-45 Gaucho victory, the team’s second-most lopsided win in conference play this year.

Statistically speaking, there’s not much that Cal Poly does especially well. The Mustangs are near the bottom of the Big West in several categories, on offense and defense, and have surrendered over 80 points six times in conference play.

The Mustangs are especially weak on the boards, as opponents average 4.4 more rebounds a game than Cal Poly. That’s the worst mark in the Big West and UCSB will be eager to exploit.

If Heidegger is forced to miss Saturday’s game as well, it won’t be much of a change for the Gauchos when it comes to playing Cal Poly. The senior guard missed the Jan. 8 matchup as well, and while the team’s 63 points don’t scream success, the margin of victory suggests UCSB knows how to beat Cal Poly without their leading scorer.

The Mustangs have just one player averaging over 10 points per game: sophomore guard Junior Ballard. Ballard averages 12.8 points per game and shoots 36%  percent from three, enough to make him the primary focus for any team playing Cal Poly.

If the Mustangs are able to reverse their slide and beat Long Beach State on Thursday night, they’ll come into the Thunderdome with a potential postseason bid on the line. If not, there won’t be much to play for, other than a shot at spoiling UCSB’s shot at second place.