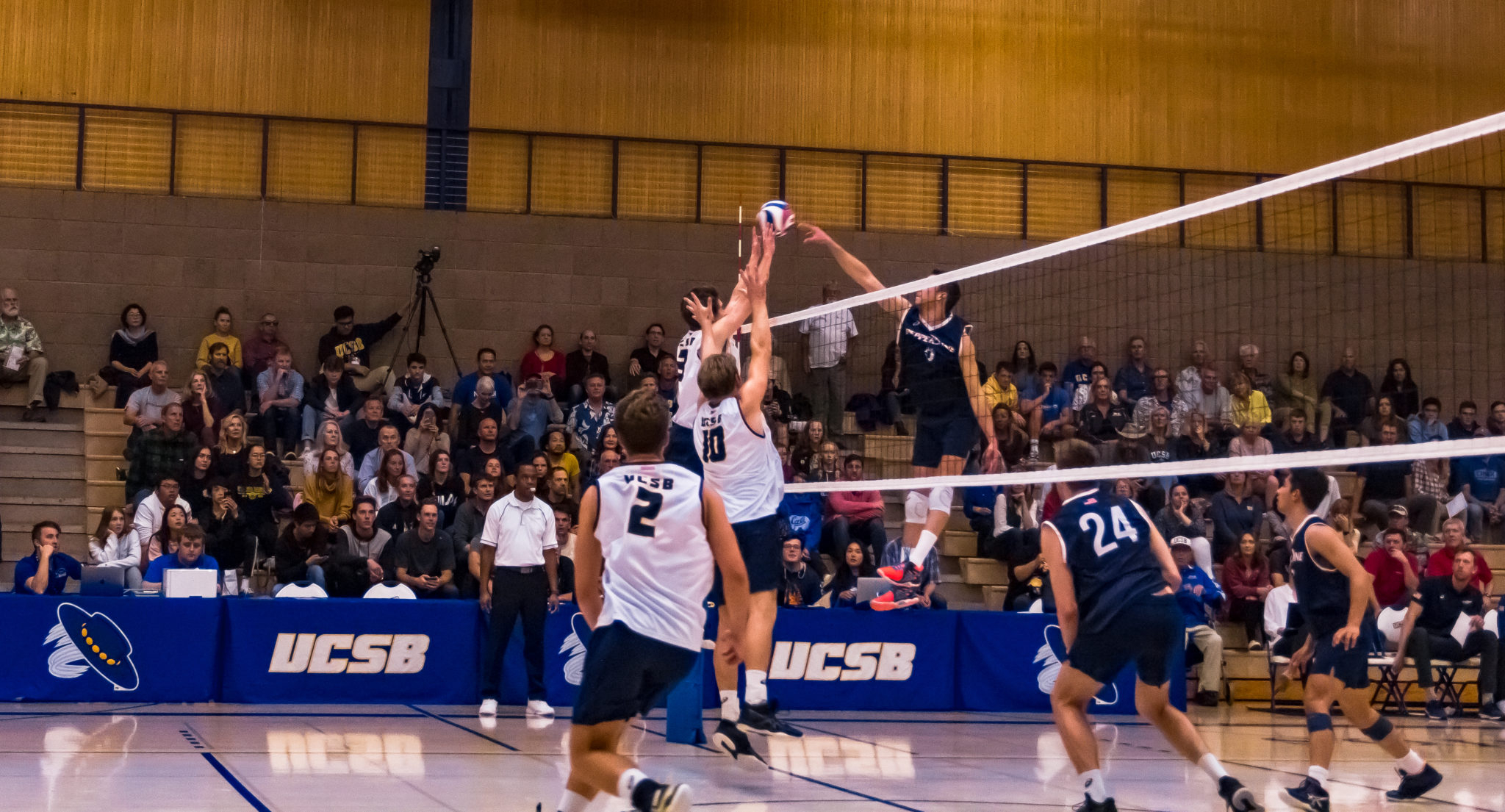 With 3 games and 9 straight set wins, the No. 4 UCSB men’s volleyball team, now 3-0, toppled their competition in their 2020 season debut at-home invitational.

Against all three opponents — Concordia University Irvine, Benedictine University at Mesa and McKendree University — the seasoned team showed chemistry and consistency, keeping their challengers under 20 points in all but 2 sets.

Santa Barbara’s success awarded four of its players to the All-Tournament Team: setter Randy DeWeese, setter Casey McGarry, opposite Keenan Sanders and libero Grady Yould. The quartet’s performance on the court — despite assuming new roles on it, as with DeWeese — reflected the seniors’ skills and experiences as individual players and as teammates.

The Gauchos’ weekend closed with a match versus McKendree (1-2 overall), in which they swept the Illinois roster with set scores of 25-19, 25-17 and 25-16. UCSB’s showing undoubtedly destabilized McKendree’s lineup, whose bleak presence was overshadowed by a seasoned Santa Barbara roster. With a steady flow of kills and a consistent system of defense across the UCSB starters, the team never dropped their lead throughout all 3 sets.

In a bold experimental lineup, Head Coach Rick McLaughlin tested Haotian Xia as an outside hitter and Roy McFarland as an opposite. The sophomore-senior corners took control of the offense, each contributing 10 kills. Senior McGarry also topped SB with 5 digs.

Sophomore Brandon Hicks executed a successful 8 kills out of 9 total attempts, finishing the game with the highest kill percentage of the day at .889. Hicks backed up his offensive performance with 3 block assists.

This last game, however, was only the culmination of a rolling victory wave that had begun two days prior. In its opening match, UCSB faced Concordia-Irvine, who, in retrospect, posed the first and really only threat to their reign. Concordia fought back after their first 2 set defeats, pushing the third, though unsuccessfully, to an ultimate 24-26 loss. The game record played out favorably for the Gauchos as follows: 25-15, 25-16, 26-24.

Here, DeWeese made his 2020 debut as the Gauchos’ outside hitter, stepping away from his usual position as a setter. 14 kills later, the Sacramento native’s undeniable performance proved his seamless transition to his new spot.

Fellow seniors McFarland and Sanders backed up DeWeese’s intimidating presence, each racking up 7 kills apiece (with Sanders reaching a .700 kill percentage). Yould would earn a large part of his All-Tournament title here with an impressive 8 digs.

McGarry matched his teammate’s 8 digs in the Gauchos’ second game against Benedictine University, his highest dig count out of the three games. The Manhattan Beach local, named as well to the All-Tournament Team, finished the invitational with 17 total digs and an overall standout coverage of the court.

The skill-packed, nationally-ranked Santa Barbara lineup was hardly a relief for the Benedictine Redhawks, who had come off of a loss against No. 5 Cal State Long Beach the day before. The Gauchos again swept Benedictine Mesa with ease, winning 25-12, 25-21, 25-18. Here, sophomore Ryan Wilcox stood out with 15 kills, the highest number among the team over the course of the weekend.

Though the Gauchos avoided more threatening competitors like Long Beach, they nonetheless will be bolstered by their electric debut. Their consistency across the board will be crucial as they look to the near future where the team will face increasingly more challenging opponents such as Stanford, USC and UC Irvine. For now, the team is preparing to take on Purdue Fort Wayne and Ball State this upcoming weekend.