Long-time Isla Vista community member Gary “Michael” Bean, known by many as an advocate for learning and sustainability, passed away on Feb. 4. A crowd of roughly 70 people honored his life and legacy at Little Acorn Park on Feb. 27, where Isla Vista residents of all ages gathered to celebrate his commitment to fostering community and helping others. 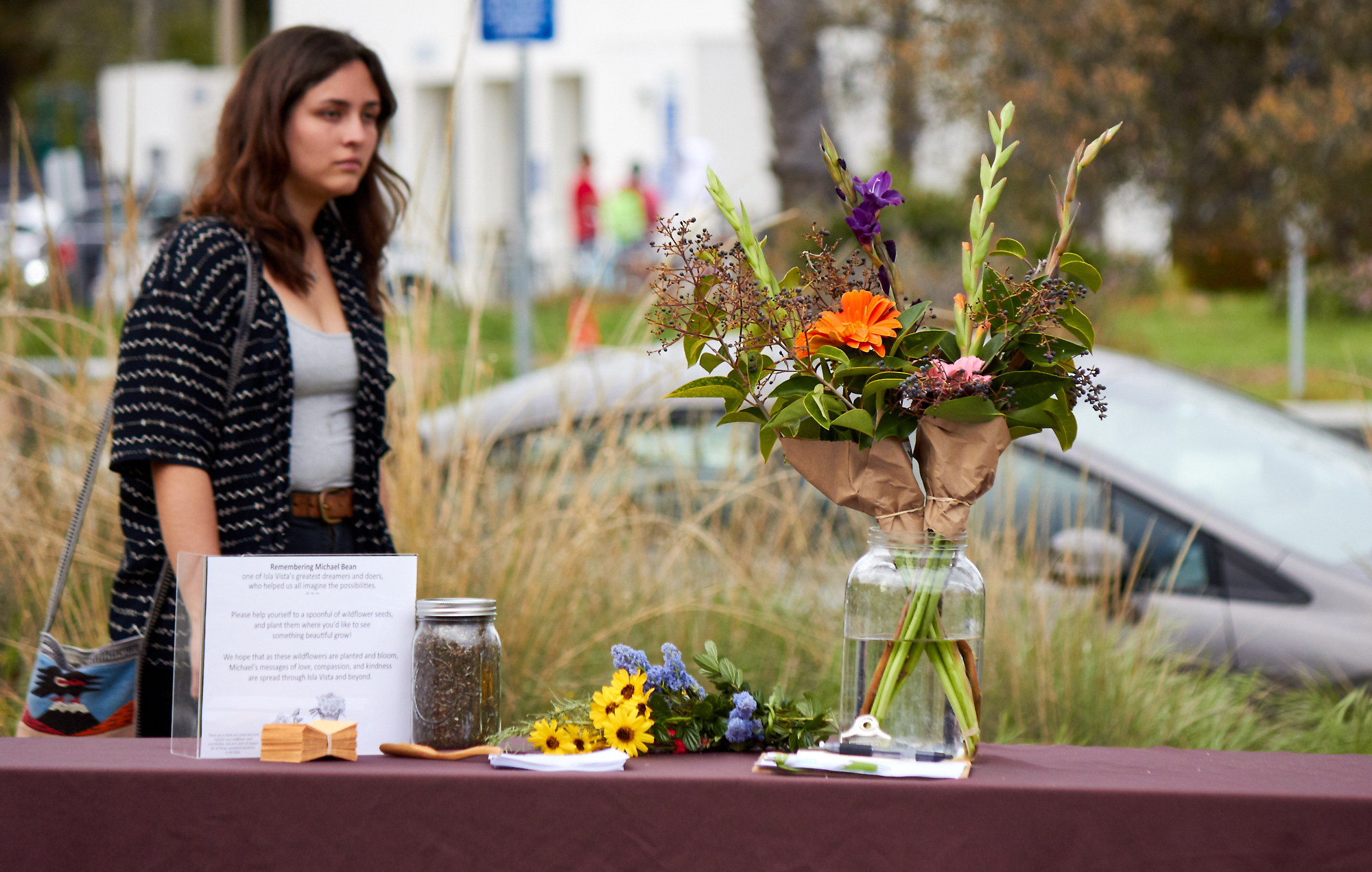 UCSB students and permanent Isla Vista residents alike touted his dedication to the community around him. Jonathan Sloboda / Daily Nexus

Community members spoke about how Bean, who has been in Isla Vista since the 1970s, touched their lives, followed by a commemorative Polynesian dance and a performance of “Imagine” by John Lennon, where attendees sang along.

Bean — who instituted the Isla Vista Free Box, a community donation box in front of the I.V. Recreation & Park District building, and was a guest speaker at various UC Santa Barbara classes — was remembered as “the type of person to respect all people, regardless of who they were,” said Marcelino Sepulveda, a friend of Bean’s.

“He touched many generations of people, and that is represented here today. Today is an opportunity for the greater community to honor Michael for who he was and what he gave us,” Sepulveda said.

Attendees spoke of Bean’s talent for bringing together generations; UCSB students and permanent Isla Vista residents alike touted his dedication to the community around him.

“Michael had an uncanny ability to see past age and see the person instead, which made people of all ages enjoy his company and want to spend more time with him,” one tearful community member explained.

Bean’s commitment to the environment was “unparalleled,” they added. Bean often biked through the streets of I.V. collecting trash and was a strong proponent for a community forest to feed food-insecure community members, the community member said.

Bean was also an active member of the spiritual group Diamond Heart, as several mentioned at the memorial.

“In our group sessions, we would share personal information that was often very difficult to say. Michael would always be there with a kind word, to listen and in turn share his personal stories,” according to one speaker.

“We would often read together,” Ash Vincent, a UCSB environmental studies and feminist studies major, said. “He was always interested in what me or any other people were reading, and I thought sharing that shows how he was always interested and always learning new ways he could be useful to the community. I think he was underappreciated.”

Many, including Vincent, left memorial attendees with concrete ways to honor Bean’s legacy. In addition to a petition to dedicate the Free Box to Bean, Vincent encouraged attendees to email him for a copy of an Ecovista source book that Bean wrote before his death.

One UCSB student — Bean’s neighbor and an environmental studies major, who remained unnamed — acknowledged his uncommon relationship with Bean, who he met in UCSB Professor John Foran’s sociology class Earth in Crisis.

“Michael had a very special connection to this place, and I got to see him try and better himself and our community… seeing him biking around and coming home to him feeding the scrub jays in our yard was a really special moment for me, and I’ve been doing my best to feed them for him,” he said.

Sepulveda, who helped organize the celebration of life, asked attendees to take wildflower seeds and spread them around I.V. following the event.

“We invite you to take these and disperse them, so that his spirit may grow and blossom amongst the flowers here,” Sepulveda said.

A version of this article appeared on p. 4 of the March 5, 2020 print edition of the Daily Nexus.

a photo would seem appropriate