Bernard Lafayette Jr. has been arrested 27 times in his struggle for civil rights.

If you go by his own count, he’s been arrested 30 times – three separate times, he was already in prison at the time of his arrest, he said. 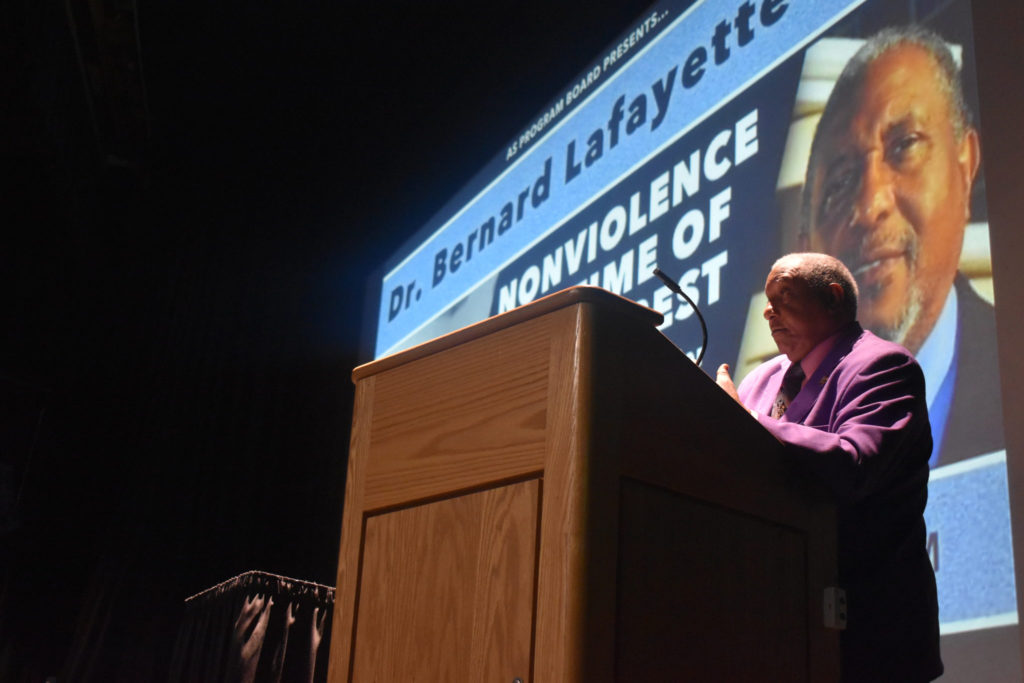 On Feb. 20, Lafayette, a prominent figure in the civil rights movement, came to UC Santa Barbara to talk to the student body about how to live as conscious citizens in a world shaped by the actions of social activists.

The discussion, titled “An Evening with Dr. Bernard Lafayette Jr.: Nonviolence in a Time of Civil Unrest,” was organized by the Associated Students Program Board and marked Lafayette’s first visit to the university.

Most associated with the Freedom Riders and later the Selma Voting Rights movement, Lafayette emphasized the importance of nonviolent resistance, having worked closely with Reverend Martin Luther King Jr., Diane Nash and James Bevel in the American Civil Rights Movement.

In 1967, King even offered Lafayette a position as the program director of the Southern Christian Leadership Conference (SCLC).

In an interview with the Nexus before the lecture, Lafayette went into detail regarding his experiences as a political organizer and a protester, working with the Nashville Student Movement, the Student Nonviolent Coordinating Committee and the SCLC.

He also lamented traits that he said he has seen in some present-day social movements and activists, such as a tendency to focus on the problems themselves rather than proposed solutions, as well as an inability to look at their activism from a broader perspective.

“Public policy is very much related to what people expect and expectations from constituencies that are involved … they can’t look at it from a narrow, narrow view. Unfortunately, people sometimes make decisions [solely] based on their own ethnic identity or political affiliation,” he added.

He also noted that the arrival of advanced technology, such as the internet, has allowed people who share similar values and ways of thinking to establish forums and foster vibrant communities of activists.

Social media, for instance, changed the playing field in regards to how opinions, personal musings and even breaking news is communicated to and amongst the masses, Lafayette said.

“[With social media] you can communicate with large numbers of people,” he said. “We didn’t have that. We had to use little simple methods and depend so much on the public media.”

Building a relationship with the media, however, still remains an incredibly important thing to do, Lafayette said. He added that the media is the party that will project a social movement to the broader public.

“That’s how we were able to accomplish the things that we accomplished, because we learned how to deal with the media. Part of the whole movement is to reach the masses of people … you need to pay special attention to maintain and sustain a movement.”

“The media is [still] important … you have to learn how to maintain communication with the media in such a way that your movement is able to continue,” Lafayette said.

For example, Lafayette recalled his experience as one of the original Freedom Riders, civil rights activists who protested segregated buses in the South by riding interstate buses from Washington, D.C. to New Orleans in mixed-race groups.

When the Freedom Riders were arrested in Jackson, Mississippi, Lafayette said he and his companions were able to create more publicity for their movement when they were taken into police custody.

“Rather than [make bail] and continue on to New Orleans, we decided to stay in jail a longer period of time. We stayed in jail to prolong the movement,” Lafayette said, adding that “as a result of this, we had [people from] about 11 different countries come to the U.S.” to express solidarity.

As he began his talk, Lafayette started to discuss lineage, speaking to the crowd about his formative years growing up in the Tampa, Florida area, as well as his Afro-Caribbean and French roots.

During the talk, Lafayette focused on the distinction between successful and unsuccessful social movements, asking, “What are some of the techniques and strategies that are actually applicable universally?”

The easiest answer to this, according to Lafayette, is also the simplest: disciplined nonviolence.

“What you don’t want to do is behave the same way the others behave. If you’re gonna bring about change, you have to change yourself first,” he said.

Lafayette also described the need to appeal to the popular majority in order to secure civil rights gains.

“It was Napoleon who said that no revolution has ever been won without the active support of the majority. Who do you think passed the Civil Rights Bill in Congress?” he asked the crowd. “There weren’t no Black elected officials to pass no bill. We were able to win them over.”

When the floor opened to questions, the audience honed in specifically on Lafayette’s relationship with the late King.

When asked about his disagreements with King, Lafayette could only recall one — whether or not the Albany Movement to desegregate public spaces in Georgia was a success.

“King believed that we failed, but my position was that no, we succeeded in the Albany Movement. Martin Luther King would always get involved in movements that had larger impact and bring about some national change or national legislation,” Lafayette said.

When asked how he responded to the news of King’s death, Lafayette described how the tragedy reinstilled in him the drive to continue King’s work. Lafayette said he devoted his energy and attention to King’s broader long-term goal: to spread the practice of nonviolence across the globe.

“I had to make a decision, with the news of his death … I decided to focus on the last words that King said to me: ‘We have got to internationalize and institutionalize nonviolence.’”

After King’s death, Lafayette returned to school to further educate himself on the law and the utility of nonviolence in social and political advocacy.

After college, he would continue to work as an activist for decades, becoming a distinguished authority on nonviolent strategies for social activism.

Along with nonviolence, Lafayette said persistence is also a key ingredient in the making of a successful social movement.

“You know, I was beaten in Selma, Alabama, the same night that Medgar Evers who was in the NAACP, in Mississippi, was shot and killed. And they planned to do the same thing to me the same night,” Lafayette said. “Fortunately, I survived that.”

“The FBI reported to me that [the Ku Klux Klan] had a plan to castrate me, to throw me in the river, and all that, you know. But fortunately I survived it,” he added. “ Don’t give up on the campaign, no matter what happens.”