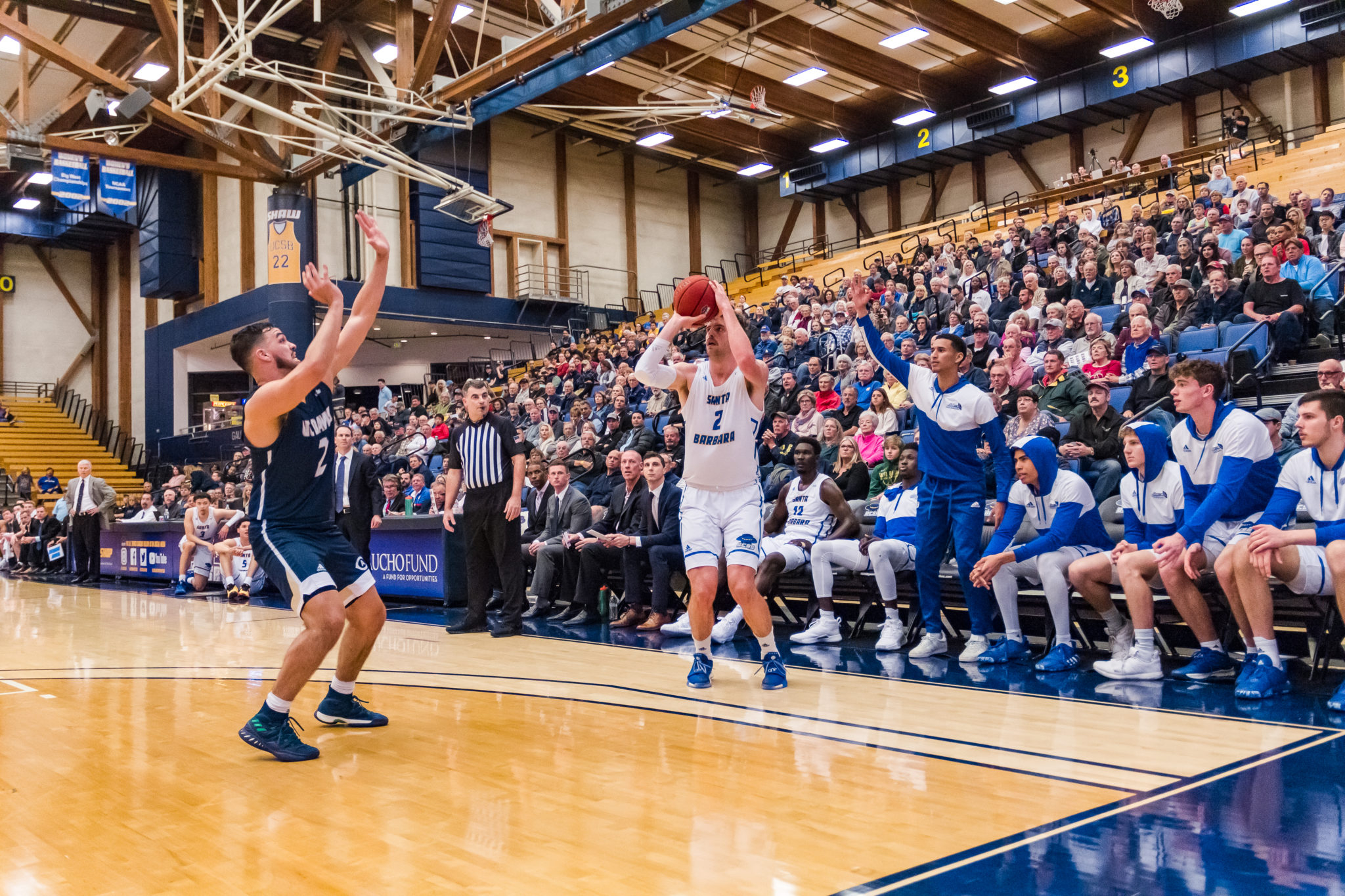 After a loss to UC Davis last week dropped the UCSB men’s basketball team from second to fourth place in the Big West and snapped their three-game winning streak, the team faced a turning point in their season this week.

With two games on the docket, the first on Thursday at Cal State Fullerton and the second being a home rematch on Saturday against UC Davis, the Gauchos had the opportunity to bounce back and improve their positioning in the conference standings. UCSB took that opportunity and swept the week with a 75-66 win over the Titans and a 70-56 victory over the Aggies.

The two wins pushed the Gauchos’ record to 18-9 this season and 7-5 in conference play. That conference mark is good enough for second in the Big West, a half-game ahead of UCD and three-and-a-half behind UC Irvine.

The Gauchos seemed determined to make the most of their opportunity immediately on Thursday evening. UCSB opened the game on an 11-0 run in the first three minutes, with graduate transfer forward Matt Freeman contributing 7 of the points.

“Matt Freeman had a monster first four minutes of the game,” UCSB Head Coach Joe Pasternack said. “That really got us going.”

Bloodied as they were by the Gauchos’ opening volley, the Titans showed no sign of quitting on their home court. Slowly and surely, Fullerton dragged their way into contention, at one point narrowing the UCSB lead to 2 points and went into the locker room down by 34-29.

The Gauchos maintained their advantage for the much of the second half but were unable to reopen their lead into the double-digits. Fullerton kept on hanging around, waiting for the opportunity to make their move.

That opportunity finally presented itself just after the eight-minute mark of the second half. The Titans stitched together the right combination of buckets and stops and took a 56-55 lead, their first of the game, with 7:34 to go.

Baskets from each of Fullerton’s top three players — senior forward Jackson Rowe, graduate transfer guard Brandon Kamga and senior guard Austen Awosika — pushed the Titan lead to 63-59 with 5:40 left and forced UCSB onto its back foot.

The Gauchos responded to the reversal of fortunes with vigor. UCSB closed out the game on a 16-3 run for the 75-66 victory, giving the game a symmetrical appearance with Gaucho runs to open and close the proceedings.

Senior guard Max Heidegger scored 8 of UCSB’s final 16 points and finished with a game-high 27 points. Heidegger also pulled down 7 rebounds and passed out 5 assists, making for a well-rounded performance.

Heidegger’s 7 boards tied him with junior guard Devearl Ramsey for a team-high rebound count. Neither Heidegger, at 6’3”, or Ramsey, at 6’ even, have anything resembling a height advantage on the glass, but both guards found a way to find the ball.

Thursday’s matchup was the first between UCSB and Fullerton this season, giving the Gauchos their first chance to take on the team that knocked them out of the Big West Tournament last season. While the Titans are a much different team this season than they were last year, the element of revenge likely made the win just a little sweeter for UCSB.

Revenge was also at play on Saturday night against UC Davis. The Aggies came into the Thunderdome on a four-game winning streak, including an 84-75 win over UCSB last Thursday.

The Gauchos came out of the gate looking like a team intent on vengeance — perhaps a little too intent. UCSB committed 6 turnovers in the first eight minutes of the game, enabling UCD to jump out to an early 14-6 lead.

“I feel like we were just a little anxious,” Ramsey said. “We just wanted to get out there and play really hard and we just had to channel our energy in the right way.”

It took a few minutes, but the Gauchos eventually managed to settle down and stop giving the ball away. Once that happened, UCSB was able to chip away, slowly but surely, at the Davis lead with good defense and some solid interior play by sophomore forward Amadou Sow.

A tip-in by junior guard Brandon Cyrus and a jumper by Heidegger brought the Gauchos within 2 points of the Aggies and forced UCD Head Coach Jim Les to call a timeout with 7:15 left in the half. That timeout did nothing to stop the Davis slide, however.

The Aggies turned the ball over immediately out of the timeout and suddenly, Ramsey  was everywhere. The point guard knocked down a 3, made a layup and knocked down another 3, all in the span of about 70 seconds.

Ramsey’s one-man run pushed UCSB into the lead with 5:28 to go in the first half and energized the Thunderdome crowd. Freeman knocked down 2 free throws a few minutes later to make the score 31-21, but a couple of scores by Aggie senior guard Joe Mooney cut the deficit to 31-26 going into the locker room.

Neither the Gauchos nor the Aggies were able to break away from the other for most of the second half. UCSB held onto their lead, but UCD managed to answer seemingly every basket or stop with one of their own.

With just under seven minutes left, the Gauchos managed to stitch together another run — their first real spurt of the half. After UC Davis freshman guard Ezra Manjon knocked down 2 free throws to cut the lead to 54-50, UCSB worked the ball inside: big man Sow scored twice and Heidegger flipped in a layup to push the lead to double digits for the first time in the half.

Les immediately called a timeout and, unlike his earlier timeout, this one managed to flip the momentum, at least for a little bit. Junior forward Kennedy Koehler scored 3 straight times  to bring his team back within 4 points of the lead, putting some serious pressure on the Gauchos.

UCSB responded with overwhelming force. Heidegger struck back first with a deep 3 from straightaway, and it was all Gauchos from there.

Koehler’s last layup in his personal mini-run was UC Davis’ last point of the night, and it came with 4:18 left on the clock. The Aggies were wholly unable to get a bucket from that point on, while UCSB poured on 10 straight points to close out the 14-point win.

While the end of regulation wasn’t particularly exciting, with the Gauchos holding such a commanding lead, the postgame handshake line had plenty of drama.

First, Les appeared to pass Pasternack without a handshake and then yelled back at the Gaucho head coach. As Les was yelling, Mooney ran up behind Heidegger and shoved the Gaucho guard in the back, setting off a shoving match at center court that took a while to finally clear up.

Pasternack didn’t provide an explanation of what exactly happened, but he did have plenty of praise for Les.

“I’m not sure [what was going on],” Pasternack said. “I think Coach Les is one of the best coaches in the country. I think he is very, very hard to beat. His teams execute as well as any team I’ve ever coached against in my career.”

Heidegger led all scorers with 17 points, but Sow wasn’t far behind with 16 of his own. The second-year big had 6 rebounds and 2 blocks and made his presence felt against an undersized UC Davis team.

Once again, it was a guard cleaning up the boards for UCSB, but this time it was Cyrus with a team-high 8 rebounds. Junior guard JaQuori McLaughlin, meanwhile, led the Gauchos with 7 assists.

Next up for UCSB is a Thursday matchup against UC Riverside, who is currently second-to-last in the Big West, and then a Saturday game at UC Irvine. The Anteaters sit comfortably atop the Big West at 11-2, but the Gauchos stole their crown the last time the two teams met with a 64-61 victory.