On Friday at 8 a.m., UC Santa Barbara graduate students set up sleeping bags and work areas on the fifth floor of Cheadle Hall — UCSB’s main administration building — both in the hallways and directly in Chancellor Henry T. Yang’s office.

Sixteen hours later, when the clock hit midnight, over 70 people were still there. 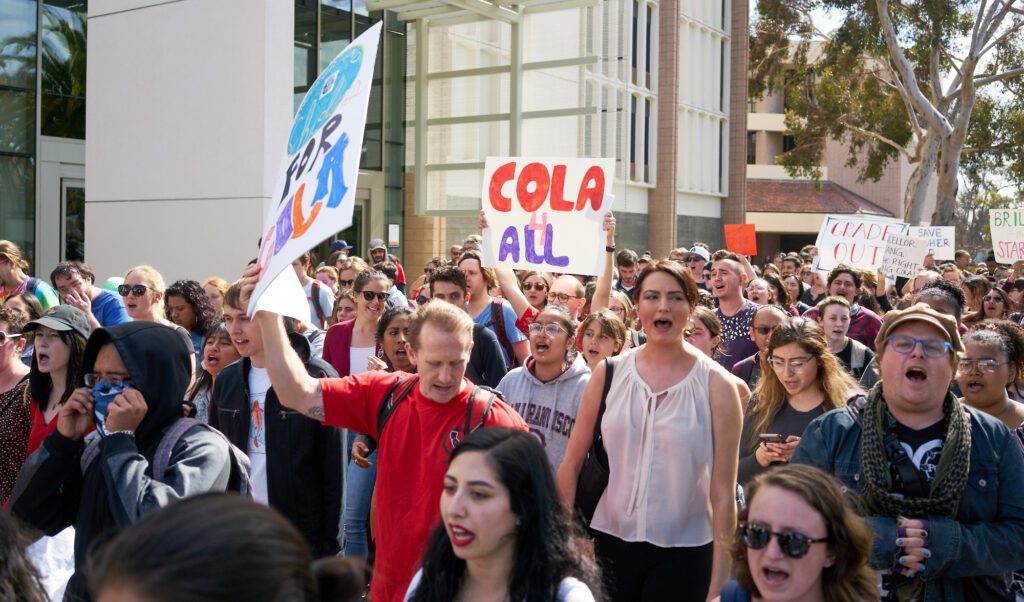 The height of Friday’s solidarity demonstration at UCSB was a noon rally in front of the University Library, which drew a crowd of approximately 500 graduate students, undergraduate students and faculty. Sicheng Wang / Daily Nexus

Over the course of the day, hundreds of UCSB graduate students held a 16-hour-long occupation of Cheadle Hall, standing in solidarity with striking graduate students at UC Santa Cruz, as well as calling for a cost-of-living adjustment (COLA) of their own.

Graduate students from advocacy group UCSB 4 COLA organized the sit-in in response to a call for solidarity from UCSC graduate students, who have been organizing for a COLA, a monthly stipend meant to alleviate high housing costs, to be added to their pay since September 2019.

UCSC graduate students are facing termination warnings as a result of their strike, which includes withholding undergraduate grades from Fall Quarter 2019; the UCSC administration set a midnight deadline on Friday for graduate students to turn in the grades, warning that failure to do so would result in their termination from the university.

The majority of UCSC graduate students on strike continued to withhold their grades after midnight, according to a statement that the UCSC Graduate Student Association (GSA) sent out on Friday at 9 p.m.

The UCSC graduate students have only formally been on a full strike since last Monday, when graduate students stopped all teaching, office hours and research indefinitely. The strike is called a wildcat strike because it is not authorized by the graduate students’ union, United Auto Workers (UAW) 2865.

The height of Friday’s solidarity demonstration at UCSB was a noon rally in front of the University Library, which drew a crowd of approximately 500 graduate students, undergraduate students and faculty. Several organizers spoke to the crowd, reading out UCSB 4 COLA’s demands from that morning that called for Yang to release a statement supporting the striking UCSC graduate students.

Ralph Armbruster-Sandoval, a department chair of Chicano studies, spoke at the rally, calling UC President Janet Napolitano’s actions “outrageous.” He put the day’s actions in a historical perspective, referencing the 1968 North Hall Takeover by Black students and the 1994 hunger strikes by Chicanx students as ways UCSB students have historically used their power to create change on campus.

“As they say, desperate times call for desperate measures. And the situation of graduate students and so many others over the cost of living is desperate, is it not?” Armbruster-Sandoval asked the crowd.

“Going on strike and withholding grades gives you a tremendous amount of power. Those with power don’t want other people without power to have it. So the Black students, when they took over that building in 1968 … they had power.”

COLA organizers are also circulating a petition of support from faculty at UCSB and encouraged the faculty present at the rally to attend weekly COLA General Assembly meetings to become more involved. Armbruster-Sandoval, who is on the executive board of the UCSB Faculty Association, said that the group is meeting this weekend with other UC faculty associations, and that they plan to speak about the COLA movements.

After the noon rally, organizers marched to the Mosher Alumni House, where the Board of Trustees, which is in charge of securing gifts and trusts to fund programs at UCSB, was holding its winter board meeting.

Students and faculty alike chanted, “Up, up, up, with the workers; down, down, down, with the bosses,” as dozens of organizers walked up the steps of Mosher and hundreds more filed across the bike path and into the nearby parking lot. 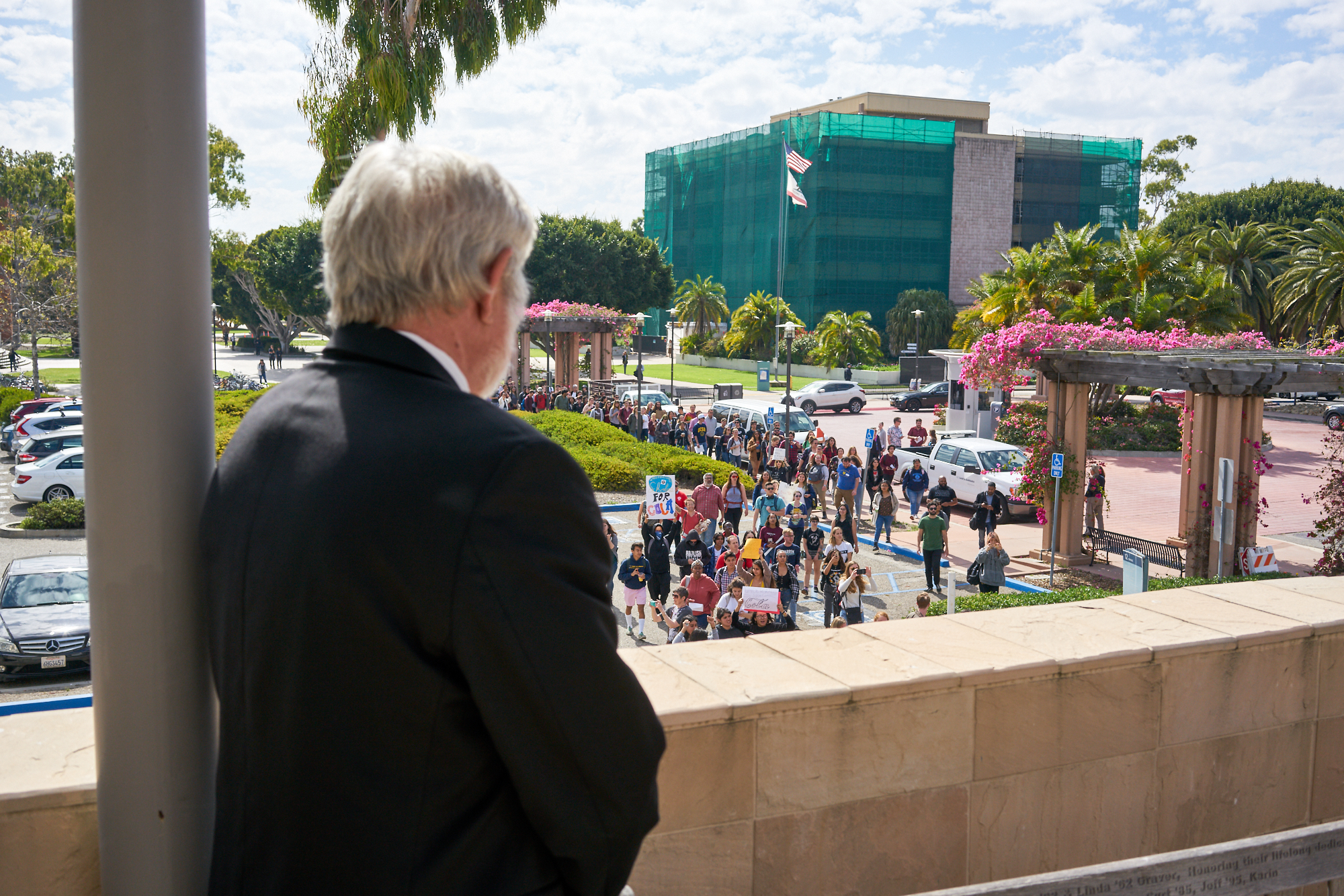 For the rest of the day, graduate students carried on with business as usual, grading assignments and holding sections — albeit in Cheadle Hall. Besides the noon rally, the fifth floor occupation remained relatively uneventful, with organizers even setting up a projector to watch “The Matrix” later in the evening.

Several undergraduates who attended sections at Cheadle Hall said that they were in support of the COLA movement and their TAs.

“The TAs are being exploited right now. There’s definitely some unfair practices happening around the fact that the UC Regents refuse to discuss it; it’s pretty disappointing,” said Kate Ripley, a first-year psychological and brain sciences major who was there to attend her Feminist Studies 30 section.

“In college, I’ve noticed in all of my classes that I don’t get nearly as much instruction from professors as I do from the TAs. The TAs are there to talk to you personally. The TAs are always there for you,” said Jamie Donofrio, a second-year computer science major. “They need to live, and that’s kind of a thing where if a person needs to live, we need to be there to support them.”

From Ripley’s perspective, the themes of Feminist Studies 30, which including unfair labor practices and exploitation, are relatable to COLA movements across the UC system.

“I just find it very disappointing that in this situation, the graduate students have been kind of villainized and made to seem that they’re asking for too much or asking for more than others, when they’re just asking for enough to survive,” Ripley said.

“Especially with the police force that was used at Santa Cruz, it is just really disappointing. As someone who is paying tuition, I know my tuition is going towards police brutality, and that is really frustrating.”

Both at the noon rally and throughout the day at Cheadle Hall, COLA organizers emphasized the importance of undergraduate support, encouraging them to attend COLA meetings and bring their friends. On Tuesday, COLA organizers created an undergraduate petition of support which has already received hundreds of signatures in the past three days, according to Emily, a graduate student involved in COLA organizing who preferred not to give her last name.

In an email to the Nexus, Yang noted that Graduate Dean Carol Genetti and Vice Chancellor for Student Affairs Margaret Klawunn invited COLA organizers and the executive leadership of the UCSB GSA to a meeting on Tuesday to discuss “the concerns of graduate students broadly.”

“Our campus has long had a culture of working collaboratively with our students to address concerns and provide support. We recognize the challenges and pressures that our graduate students face, especially those related to housing,” he wrote.

The email sent to the GSA and COLA organizers emphasized that administrators could not “discuss the ASE contract specifically,” referencing the graduate students’ union contract with UAW 2865, which represents graduate students across the UC system. 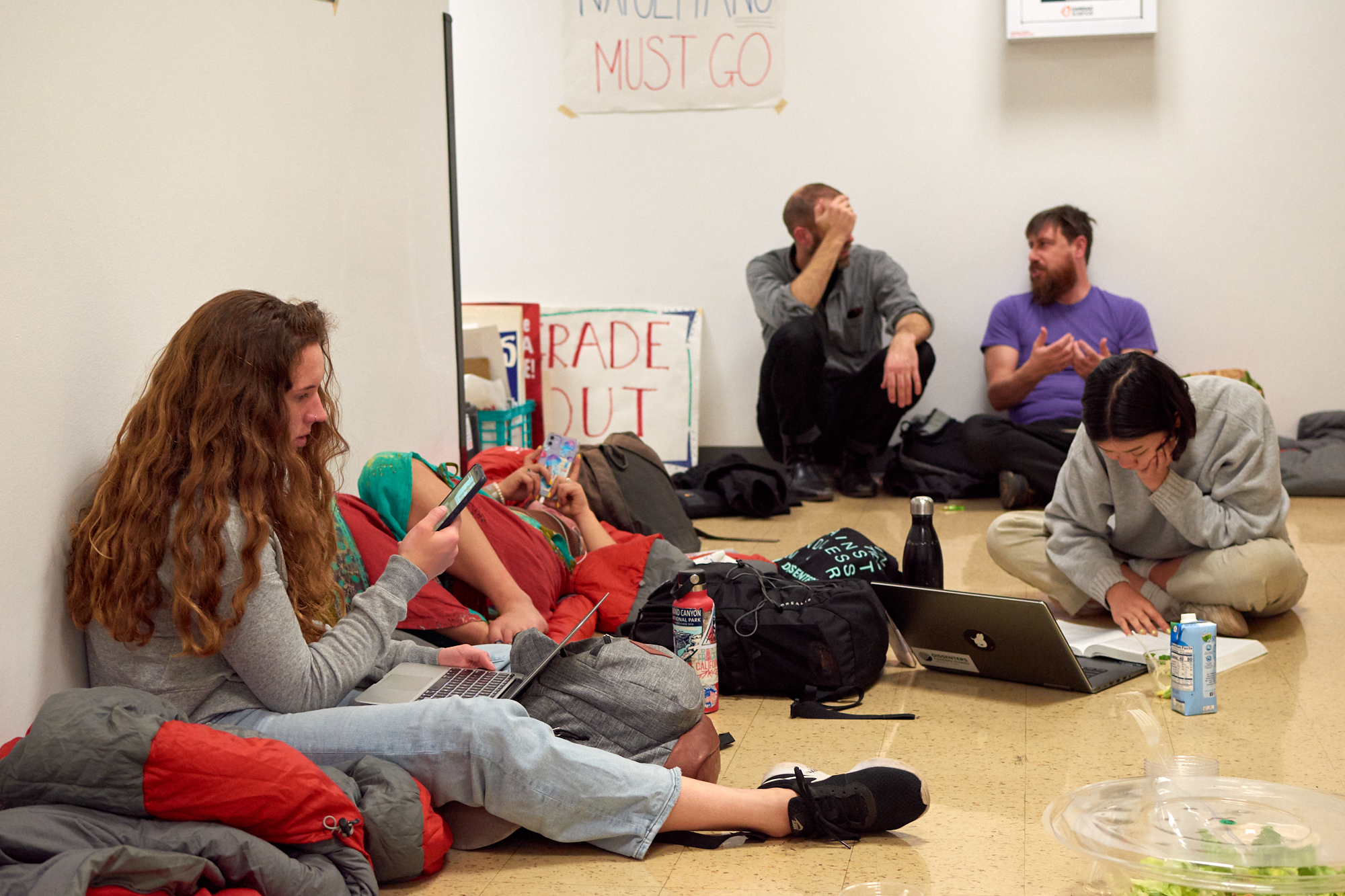 In a press release sent out shortly after 4 p.m. on Friday, Napolitano said she had invited the UC Graduate and Professional Council (UCGPC) to discuss “issues of importance and impact to graduate students, including cost of living, housing, mental health, training and mentoring, career placement, and childcare.”

Sorin, however, said she doubted that COLA would be seriously addressed in this meeting.

“Frankly, the fact that Napolitano hasn’t chimed in on things until now, until the same day that folks received warning letters of termination, I don’t think that’s an accident. I think UC bureaucracy is trying to keep this limited to a single campus because then they think they can quell the movement,” Sorin said.

She added that, from her perspective, the representatives of UCGPC are “anti-COLA” and don’t represent the feelings of UC graduate students as a whole.

“I guess my question at the end of the day would be why would she talk to COLA if she doesn’t want to legitimize the movement,” Sorin said.

UCSC’s GSA sent an email to Napolitano, the UCSC administration and UCSC graduate students in response to Napolitano’s statement, noting that “UCGPC has nothing to do with the COLA campaign [and] has refused contact since its inception.” They added that there is no UCSC representation on that council.

Kavitha Iyengar, the president of UAW Local 2865, issued a statement earlier this morning echoing Sorin’s concerns about Napolitano’s invitation to UCGPC, saying the council did not “have legal authority to bargain on the workers’ behalf.”

“Conflating COLA negotiations with UCGPC’s other advocacy efforts is an attempt to buy time and deflate the energy of this movement — and it will not work,” Iyengar wrote, adding that UAW Local 2865 had formally asked the UC to bargain with the union for a COLA in Janaury.

UCSB 4 COLA plans to hold a General Assembly meeting on Monday at 6 p.m. in the MultiCultural Center, where they intend to discuss their actions moving forward and prepare for the Tuesday meeting with administrators.

“I think in part some of that is going to be determined by what is happening at Santa Cruz come Monday morning,” Sorin said. “If folks are receiving termination letters, that may escalate things here faster, it may not.”

“This is a collective movement and we are really doing our best to ensure that we are not making decisions without as many voices as possible.”

But Sorin said she was “floored” by the response on Friday, particularly from undergraduates and faculty, and hopes to continue building a UCSB coalition moving forward.

“I have been here for five years. I’ve never felt this level of community with grad students, let alone with the rest of my campus. And I’m really optimistic about what this political movement means for all of us moving forward.”

Time to bust out the tear gas, batons, and rubber bullets.

While I don’t agree with them, this is too far, there is no need to do any of that.

Get a job you damn hippies… or at least do the one you signed up for. No one’s giving you an $1000+ monthly pay bump.

An unaddressed, but totally appropriate question, is why do we need so many graduate students. To help the prof run his or her lab? Pretty sad reason for admission (sadly common in the sciences).

Fewer students might (who knows with this business, not education, model) mean better compensation. At least it would be an avenue worth exploring — one that actually might address a specific problem (as opposed to throwing money at the symptoms).

They got caught embezzling $175 million and the LA Times wasn’t shy about pointing it out. They spent $300,000 on cops A DAY sat UCSC. They’ve got the money

Love all the scabs and fascists in these comments.

So, if I don’t agree with you, I am a fascist? Oh, the tolerant left.

The only way to enforce socialism is fascism… but you don’t want to have that conversation.

And this is a wildcat strike, not a union strike. Somebody needs to figure out what scab means.

Fire them all! They can go elsewhere if they don’t like their wages.