Over 70 graduate students voted overwhelmingly in a general meeting on Thursday evening to occupy Cheadle Hall from 8 a.m. to midnight on Friday in solidarity with the UC Santa Cruz graduate students who are facing termination threats as a result of their strike. 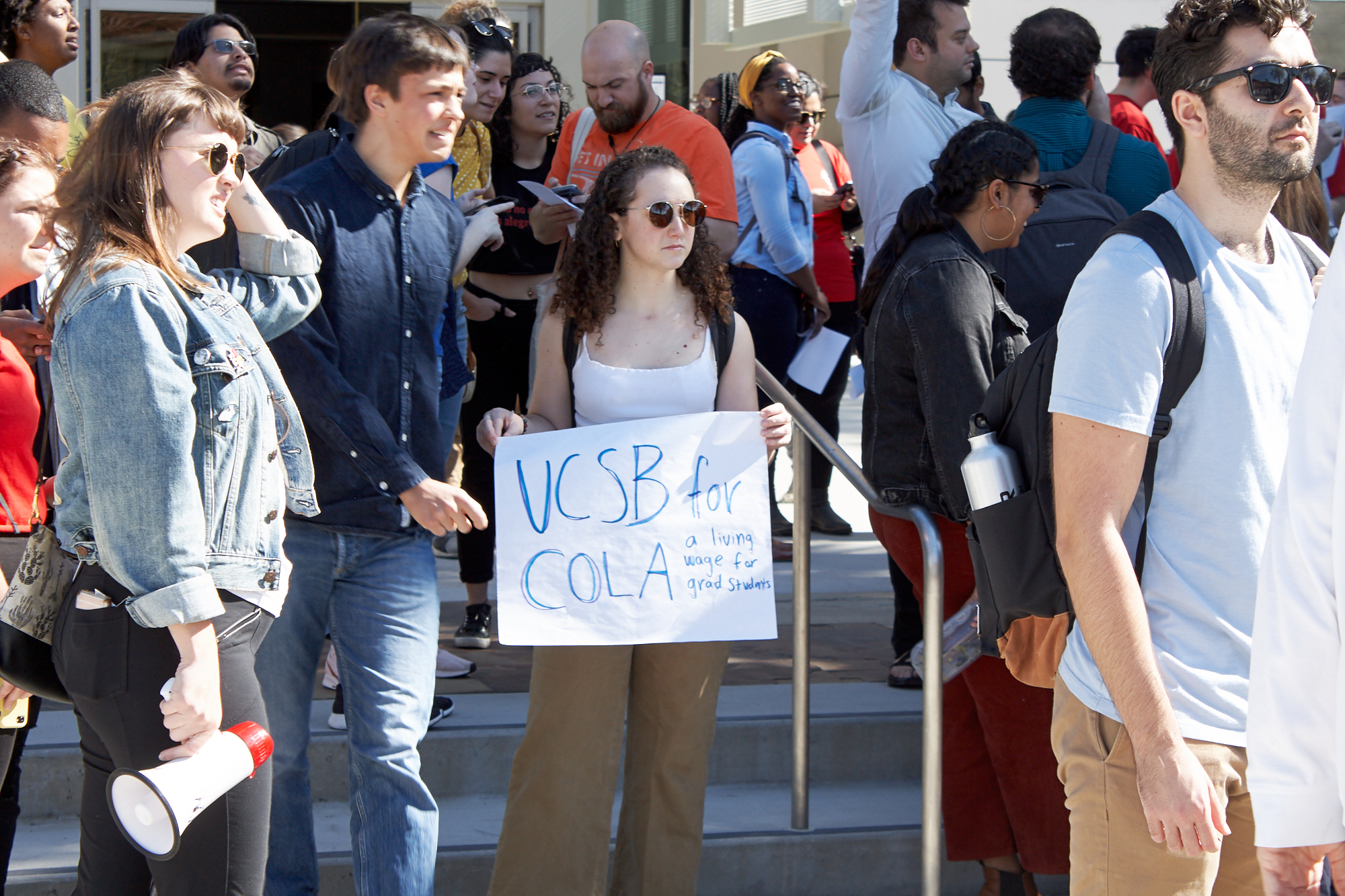 At noon, graduate students will walk to the University Library for a rally before marching back to Cheadle Hall. Kaiyi Yang / Daily Nexus

In addition to supporting the UCSC cost-of-living adjustment (COLA) movement, UCSB graduate students are fighting for their own COLA of $1,807.51 a month.

The Friday occupation, which organizers are calling the “Doomsday Strike,” will begin at 8 a.m. and will to last until midnight, according to the group’s FAQ flyer. At noon, graduate students will walk to the University Library for a rally before marching back to Cheadle Hall.

Graduate students will only end their occupation of Cheadle Hall before midnight if Chancellor Henry T. Yang  “call[s] UC President Janet Napolitano and tell[s] her to stand down in her threats against UCSC wildcats,” according to an email template graduate students are using to rally support from undergraduate and faculty allies.

UCSB 4 COLA has been organizing since January for a COLA, a monthly stipend to alleviate high costs of living. They are following the UCSC graduate students, who began a full strike on Feb. 10, with strikers stopping all teaching, office hours and research indefinitely. The graduate students also have been withholding Fall Quarter 2019 grades after voting in December to do so.

The UCSC graduate students are on a wildcat strike, which means their strike is not currently authorized by their union.

After less than a week of the UCSC strike, Napolitano addressed the strike in an email to UCSC students, staff and faculty on Feb. 14, warning that “participation in the wildcat strike will have consequences, up to and including the termination of existing employment at the University.” UCSC Interim Campus Provost and Executive Vice Chancellor Lori Kletzer also told UCSC faculty in an email that graduate students had until Feb. 21 to submit the Fall Quarter 2019 grades that they have been withholding as part of the strike.

UCSB graduate students plan to occupy Cheadle Hall until midnight on Saturday as a symbolic gesture with UCSC graduate students, who have been given a midnight deadline to submit their grades. According to an informal poll sent out earlier this week at UCSC, 171 graduate students, out of the 188 who responded, said that they are still withholding grades from Fall Quarter 2019 after receiving a warning letter of dismissal from Kletzer.

In a Call for Solidarity statement, UCSC graduate students asked other UC campuses with COLA organizers — which now include all but San Francisco — to “walk out in solidarity against the retaliatory measures that are being threatened against your UCSC comrades.”

“Other UC campuses are looking to Santa Barbara and taking inspiration in what you’re doing,” Jane Komori, UCSC third-year Ph.D. student in the History of Consciousness program and co-secretary for UCSC’s Graduate Student Association (GSA), told the group over a Zoom call during Thursday’s meeting.

“We at Santa Cruz are staking a lot on your next moves,” she added.

The majority of Thursday’s meeting was spent discussing what exactly those next moves would look like.

Organizers were already planning a noon rally in solidarity with Santa Cruz, but the suggestion to occupy Cheadle Hall was first introduced in Thursday’s meeting agenda.

As graduate students pointed out in the meeting, occupying Cheadle Hall would mean work stoppages, either in the form of cancelling Friday sections and office hours or re-locating them from their regular locations to Cheadle Hall.

UCSB GSA President Cierra Sorin noted during the meeting that there has been no response from administrators since graduate students presented their demands on Feb. 10.

Several voiced the need for greater escalation and visibility, noting that an all-day occupation confronts Yang and other administrators more directly than the noon rally alone.

During Thursday’s meeting, one undergraduate student, who was already inside Cheadle Hall and planned to stay there for the rest of the night, addressed the students on Zoom call, saying that they would be ready to open the doors for graduate students at 8 a.m.

Graduate students also discussed next steps for the UCSB COLA movement during Thursday’s meeting. Organizers are planning to take a vote next Monday to potentially go on strike at UCSB, if UCSC graduate students are dismissed from teaching positions.

In an informal poll about the possibility of striking at UCSB with 595 responses, 63% of graduate students who responded said they were “willing to pursue” a full strike if UCSC dismisses graduate student strikers.

Sorin noted during the meeting that these numbers are greater than ones from initial strike polls at UCSC prior to the beginning of their strike, and that more than a quarter of the entire graduate student population had responded to the poll.

COLA organizers said in the meeting that they plan to send out another poll next week to graduate students to assess support of a grading strike or full teaching strike and will meet again on Monday evening for COLA General Assembly.

Ha! Everyone in California wants a COLA increase. Please! Get a new profession or another job! Just wait until you’re in the real world as a teacher you’ll regret that decision because you’ll never earn enough.

Everyone in California deserves a COLA increase. I hope everyone else organizes and strikes for one too!

If “Everyone in California…strikes for one too!”, who will on hand to make the decisions you request? Or are you promoting staggered strikes by the N thousand departments of relevance? Top notch thinking.

We don’t have to go into the “real world” to know teachers are paid shit because we teach now and are paid shit now already. And, “top notch thinking” would include realizing the obvious- that Admin would never go on strike – they make six figures & get a housing stipend (something grads do not get). Their annual BENEFITS are double our yearly salary…yet they cut services to students & increase tuition in austerity measures (with UC profits higher than ever). It is the workers who strike. Graduate students in the UC teach sections of undergraduates on their own during,… Read more »