UC President Janet Napolitano and UC Santa Cruz Interim Campus Provost and Executive Vice Chancellor Lori Kletzer responded on Friday to the growing strike at UCSC, warning that “participation in the wildcat strike will have consequences, up to and including the termination of existing employment at the University.” 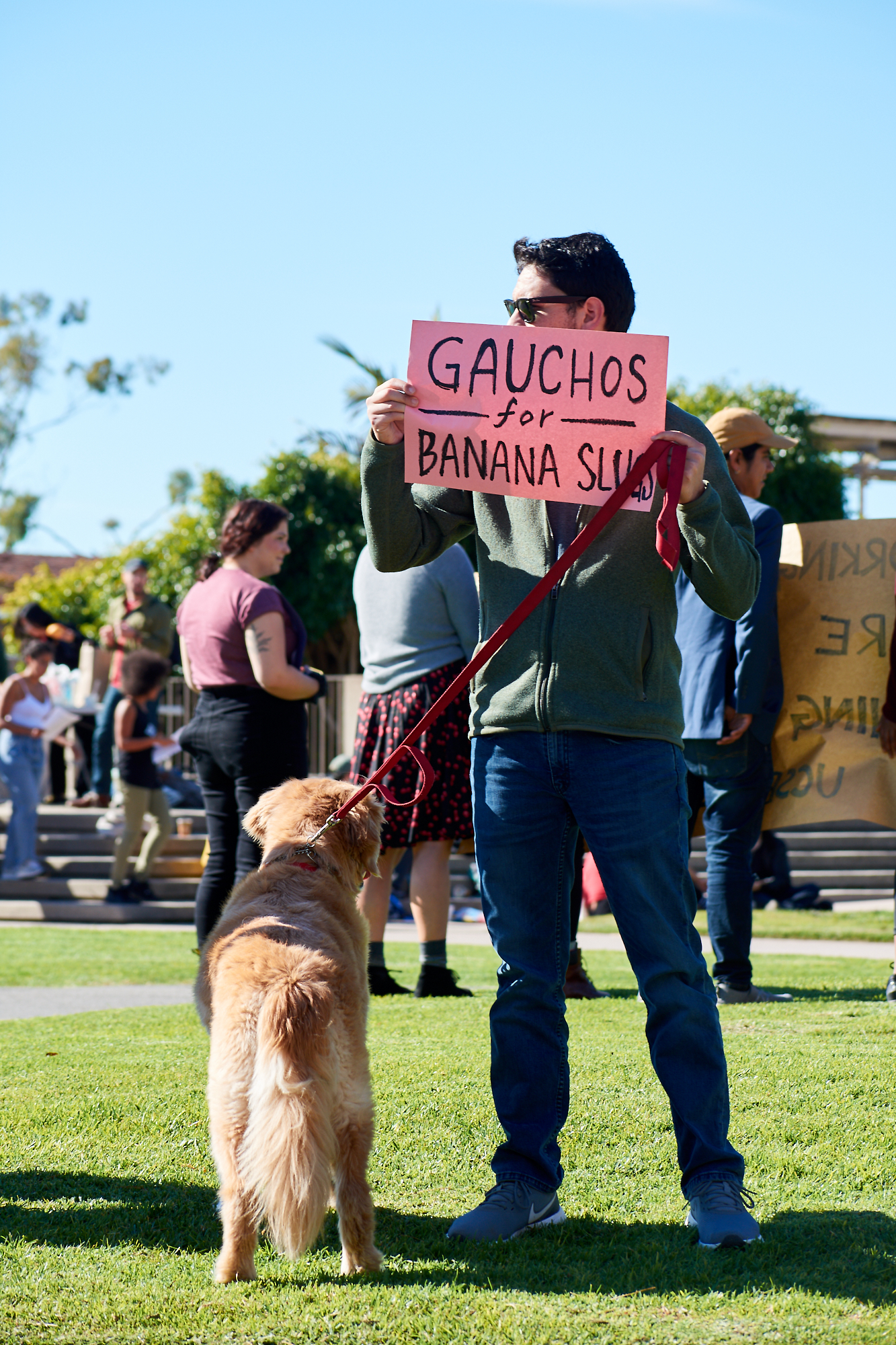 Graduate students at UCSC have been on a full wildcat strike since last Monday Feb. 10, but have been demanding a cost-of-living adjustment (COLA) in the form of a monthly stipend to alleviate high costs of housing since Fall Quarter 2019.

The strike is known as a wildcat strike because it is not approved by United Auto Workers (UAW) 2865, the graduate students’ union.

When the university did not meet the demands for a COLA of $1,412, hundreds of graduate students at UCSC voted in December to withhold over 12,000 undergraduate grades until the demands were met. When the graduate students went on a full strike last Monday, they refused to hold sections, grade or hold office hours in addition to continuing to withhold fall quarter grades.

In an open letter addressed to all faculty, staff and students, Napolitano said the contract between the university and UAW 2865 contains a “contractual promise” that its teaching assistants (TAs) would not strike while the contract was in effect, through June 30, 2022.

She added that the current contract allows for waived tuition, 3% annual wage increases, childcare subsidies, a one-time signing bonus and a remission of healthcare premiums.

“The obligations between the University and its unions are negotiated and memorialized systemwide in collective bargaining agreements, which must be voted on and ratified by the union membership,” Napolitano wrote.

Calling the wildcat strike “in direct violation of the existing collective bargaining agreement,” Napolitano said the UC would not re-open the union’s current contract nor would it agree to a COLA in addition to the current contract.

“The TAs must honor their side of the bargain, just as the University must honor its commitments. The wildcat strike must come to an end,” Napolitano ended.

Kletzer sent a separate email on the same day to all UCSC faculty, informing them that graduate students who did not submit grades from Fall Quarter 2019 would be dismissed from TA positions for Spring Quarter 2020. Kletzer wrote that graduate students had until Feb. 21 to “submit all missing grades, to end the strike and to fulfill their contractual obligations,” before facing consequences.

In her email, Kletzer also emphasized multiple times the “costs on students, particularly our undergraduate students,” that the strike was creating.

She urged faculty members to “speak with [their] TAs and advisees and encourage them to stop their unsanctioned strike and to submit the missing grades.”

Kletzer noted that UCSC Chancellor Cynthia Larive had proposed two new initiatives in an effort to end the strike: creating support packages for up to five years for doctoral students and two years for master’s students, alongside a $2,500 annual need-based housing stipend.

In a previous interview with the Nexus, Jane Komori, a doctoral student within the history of consciousness department and co-secretary of the UCSC Graduate Student Association (GSA), called the offers “insufficient,” and said they showed, to her, that the university “doesn’t take our demands seriously at all.”

On Feb. 15, UCSC’s GSA addressed Napolitano and Ketzler’s letters in an email to graduate students, telling the students not to submit their fall quarter grades before the GSA General Assembly meeting on Feb. 18, where they plan to discuss the termination threats.

“This is a decisive moment in our struggle,” the UCSC GSA wrote in the email, noting that this was the first communication the graduate students have received from Napolitano regarding the strike.

According to the email, over 200 graduate students had received warning letters from the university for failing to submit Fall Quarter 2019 grades.

“If hundreds of graduate student workers are terminated from employment, whole departments will be unable to offer courses next quarter, dozens of international graduate students will effectively face deportation, UCSC rankings will nosedive, huge sources of funding will be jeopardized, political organizing at other campuses will intensify, and UCSC may become subject to academic boycott (over 1,000 non-UCSC scholars and educators have already committed to a pledge of solidarity and non-cooperation with UCSC),” the email read.

“In short, such a move would profoundly impoverish graduate and undergraduate education and research at UCSC, as well as its collaborations and partnerships with other research institutions.”

The email also noted that a poll taken in mid-January found that 715 graduate students were in favor of withholding Winter Quarter 2020 grades.

“Our readiness to escalate is profoundly unsettling for UC leadership,” the email continued.

Union leadership at UCSB addressed Napolitano’s letter on Feb. 18 in an email to the UC Office of the President (UCOP), UCSC leadership and the COLA email groups at UCSC and UCSB. Sheila Kulkarni, the recording secretary of the UAW 2865 bargaining unit at UCSB, said in the email that termination of existing employment for spring quarter is a violation of UC-UAW Collective Bargaining Agreement (CBA), Article 3 (Appointment Security), Section D.

According to the agreement, an Academic Student Employee (ASE) can only be removed from a position when the student has become “academically ineligible.”

“The University has no standing to terminate ASEs who have been promised employment in spring quarter,” Kulkarni wrote in the email.

“To be clear, if you are a TA who has been promised an appointment for spring quarter in any way, formally or informally, verbally or in writing, this statement from President Napolitano is in clear violation of your union rights… We are more than happy to help file grievances on behalf of our colleagues at UC Santa Cruz.”

The UCSC COLA movement is calling on graduate students at other schools to begin striking as well, UCSB graduate students discussed in their most recent COLA meeting on Thursday. Organizers are publicizing a pledge of solidarity list for any non-UCSC faculty to show their support. As of Feb. 17, over 2,000 faculty members from across the country signed the pledge, including 29 current or former faculty or graduate student alumni from UCSB.

The UCSC GSA email also noted that many COLA movements at other UC campuses are growing.

“Campus and statewide administrators cannot afford to wait us out, because neither we nor any other COLA movement in the UC show signs of slowing down,” the GSA wrote.

At UCSB, graduate students presented their demands for a COLA of $1,807.51 on Feb. 10.  Since then, they’ve continued organizing and plan to spend this week phone banking, calling UCSC and UCOP administrators, as well as national progressive political leaders such as U.S. Senator Bernie Sanders and U.S. Representative Alexandria Ocasio-Cortez to ask them to support a COLA, according to UCSB COLA organizers.

They will also hold teach-in shifts in front of the University Library this week to raise awareness among undergraduate students.

I agree! Wtf is that stunt! Everyone of them is replaceable!

If these employees are not performing their essential job duties, I would fire them and seek reimbursement for overpayment for services not rendered. Invoice them for tuition and other expenses the UC covered on their behalf.

They want to ignore their job duties, negatively impact all innocent undergrads that were in their courses, cause undue distress to staff/faculty/students, etc, AND continue to collect payment for services not rendered? HELL NO.

They are putting on their big boy pants and need to deal with real grown-up consequences.

Your test was.. successful?

Your test was… also successful!

Grad students get paid for 20 hrs/week, but we work 60+ hours a week. That 20 hours is only the TA portion but we are expected to put in at least 40 hours on our research for no pay. I’m guessing you’d lose it if your boss only paid you for 1/3 of the hours you worked, and made you give back a portion of the money they paid you for the “privilege” to continue working for them.

This doesn’t take into account the compensation that graduate students get for tuition. For a masters’ program at the UC that amount is in the range of 17k to 32k based on many different factors. So one could say they make the $2400 a month plus between $1400 to $2600 a month. Taking the average between the two of $2000 means on the average $4400 a month compensation equals $52,800 a year. This seems well within reason for fresh out of college, entry level work. In fact many students after college would love to make that much. And yes, this… Read more »

This is a ridiculous take. Your honestly saying that the waiving of fees is compensation, money that never changed hands or was in the grad students bank accounts is liquid assets? When is the last time a non-academic employer said, well we’ll pay x amount which we know isn’t enough to even pay rent but hey, we won’t charge you to work here. Your just wrong on the facts. Grad students cannot feed themselves with fee waivers. Which btw, TA pay does not cover entirely, we still have to pay them fees. And before you say it’s equivalent to vacation,… Read more »

It is taxable income over a certain level so it is income. Plain and simple. TAs provide a service and are compensated for the service. There are many things that are considered compensation or taxable income where money doesn’t change hands. Graduate students are free to seek employment where they feel they are more valued. They are free to apply to areas with a better cost of living. You are also free to demand a higher wage. But because you have a no strike clause, the university is free to fire you for violating your contract. We are free to… Read more »

I appreciate that you are at least acknowledging the issue. However, tuition is not taxable (Trump tried) and is not income. It is funny money, as in it never existed. The UC was willing to drop tuition if it became taxable which means they never got anything from it for grad students. All we are asking is for the university to pay the California minimum wage, which they are not meeting. The UAW contract was negotiated in bad faith as the people they represented voted it down. And as it stands grad students carry near 75% (estimate) of the teaching… Read more »

The problem I have with these graduate and undergrad students is their lack of understanding about civil disobedience. I gladly support their protest, but I also support the consequences to their protest. Civil disobedience means you believe in a cause enough that the repercussions are worth it. This is lost on many movements today.

I hate to say it but get in line grad students. The university pays about .60 cents on the dollar compared to the real world in many fields for professionals. The benefits used to be work it mainly the pension but that is no longer the case if you are hired after 2016. The university will never pay it’s people living wages because it can get away with not paying them. It has for decades. It suffers with many incompetent and inept employees because of it. The problem is paying a living wage in a place like Santa Barbara would… Read more »