The Daily Nexus
News
UCSB Students for Justice in Palestine Calls for Boycott of SB Hillel Trip To Israel and Palestine
February 14, 2020 at 11:52 am by Sanya Kamidi

UC Santa Barbara’s Students for Justice in Palestine released a petition last Thursday calling for a boycott of the Santa Barbara Hillel’s Perspectives trip to Israel and Palestine, arguing that the trip “targets student leaders … in order to ensnare them in a right-wing effort to combat the movement for Palestinian human rights and self-determination.” 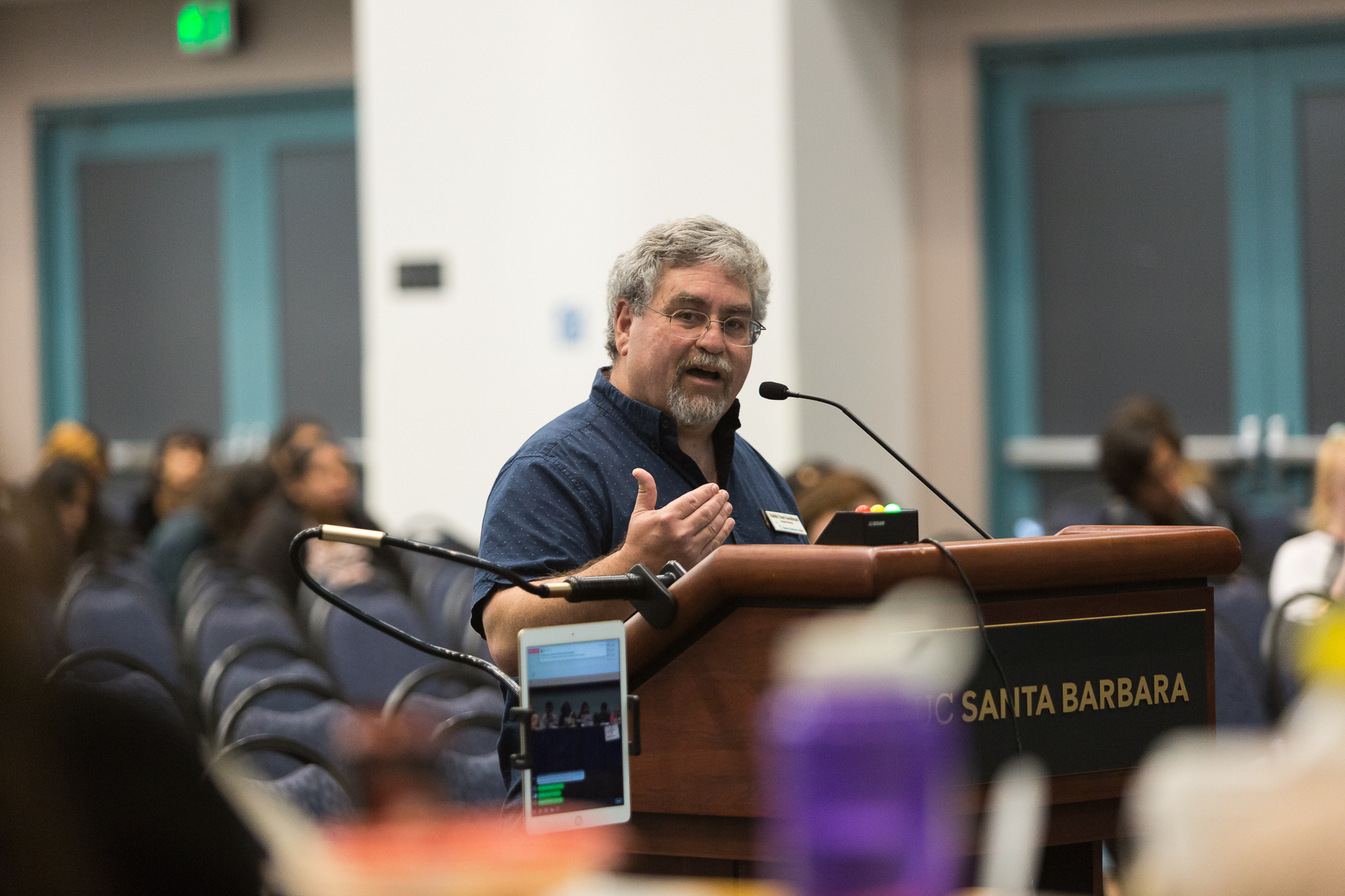 The executive director of the Santa Barbara Hillel, Rabbi Evan Goodman, has organized and led the trip for the past five years. The trip is described on the Hillel application as an almost free “life-changing trip to explore Israel and the Palestinian Authority.”

“We will bring UCSB undergraduate student leaders together to learn about inter-group and interpersonal relations. Along the way, we will explore Israeli society, Palestinian society, and the conflict in the region,” the application for the trip reads.

On the application page, the Santa Barbara Hillel, which is located in Isla Vista, says students will, among other things, “[hear] multiple narratives from a wide variety of speakers and guests, including religious, secular, Druze, Christian, Jewish-Israeli, Palestinian, and Muslim voices.”

The petition lays out several reasons why Students for Justice in Palestine (SJP) is opposed to the trip, building upon a statement it released last spring that called upon student leadership to “refrain from attending the Perspectives Israel Trip.”

“We oppose this trip on the basis of morally deficient funding sources, normalization of the occupation of Palestine, and its ultimate goal of silencing calls for Palestinian freedom,” the organization wrote in this year’s petition.

SJP argues in the petition that any Associated Students (A.S.) senators who attended a Perspectives trip would have a conflict of interest if a “divestment resolution” were to be reintroduced this year. Over the past several years, A.S. senators have introduced various resolutions calling for A.S. and UCSB, among other UC entities, to withdraw investments from companies that profit off of alleged human rights violations by the Israeli government against the Palestinian people.

Last spring was the sixth time in seven years that a version of the resolution was introduced to the A.S. Senate. The resolution failed last year, making UCSB the only undergraduate campus in the UC system that has not passed a divestment resolution.

A.S. Attorney General Tyler Barth, who is responsible for investigating and prosecuting “any potential violations of ASUCSB Legal Code,” said in an email that conflicts of interest are defined in A.S. Legal Code as “situations of personal financial gain (A1), situations wherein votes are cast to benefit friends and family (A2), and situations where the interests of AS senators’ outside organizational involvements conflict with the interests of ASUCSB (A3).”

He said in a follow-up interview that while the Perspectives trips were mostly covered by the Santa Barbara Hillel, they did not count, in his interpretation of Legal Code, as a “financial gain,” since attendees did not actually receive any financial compensation.

Barth, in addition to a number of current and former elected members of A.S., went on the Perspectives trip this past summer.

The petition also argues that the application for the trip “implicitly states” that the trip will be unbiased but does not actually provide students with “a diversity of perspectives” because the trip is funded by Maccabee Task Force (MTF); MTF advertises itself on its website as an organization created “to combat the disturbing spread of anti-Semitism on America’s college campuses.”

“We believe the BDS movement is at the forefront of this troubling trend. We maintain that BDS is an anti-Semitic movement that crosses the line from legitimate criticism of Israel into the dangerous demonization of Israel and its supporters,” MTF continues.

The Boycott, Divestment and Sanctions (BDS) movement is “a Palestinian-led movement for freedom, justice and equality,” according to the movement’s website, and “aims to end international support for Israeli violations of international law by forcing companies, institutions and governments to change their policies.”

The petition argues that MTF’s stance “demonstrate[s] [MTF’s] closed mindedness regarding the occupation, given its obvious and vehement opposition to the Palestinian call for Boycott, Divestment, and Sanctions against Israel (BDS).”

SJP also condemns the fact that Sheldon Adelson — one of the biggest funders of President Donald Trump’s 2016 campaign and a “conservative megadonor” — serves as president of MTF.

“Furthermore, the reign of terror that Donald Trump and Republican Congresspeople have exacted on marginalized communities within the United States and across the globe, combined with the continued occupation of Palestine galvanized by far-right political figures in Israel, has been extensively funded by Adelson much like MTF’s Perspectives Trips,” the petition wrote.

The petition also notes that the Santa Barbara Hillel received $238,739 from MTF in 2016 for “Campus Education and Trip to Israel” — the largest donation to a college campus listed on the Maccabee Task Force’s 2016 tax returns — and an additional $119,807 in 2017. There was no donation purpose listed on the 2017 returns.

“This demonstrates the immense commitment from outside billionaires to engage in “pro-Israel” lobbying on students, specifically at the UCSB campus,” the petition wrote.

Goodman, the executive director of Santa Barbara Hillel, said the organization receives funding from people with a wide variety of political views, but that a funder’s political leanings do not affect the kind of programming the center puts on.

“It happens, that in this case, we have a funder who we’re transparent about. If students ask, we will tell them where the particular funding from portions of this comes from,” Goodman said.

“Our organization has a budget that is close to a million dollars; there’s no student who would be happy with the politics of every single one of those donors,” he added. “We have conservative students as well, who might not be happy with some of our progressive donors’ political leanings. But that doesn’t mean that we don’t use those funds to help put on Shabbat dinners on Friday night.”

Goodman also said he is personally responsible for putting together the itinerary for the Perspectives trip.

“That doesn’t mean that my own personal politics need to align with a lead donor on this project to make it a successful project,” Goodman said.

Additionally, Goodman said Hillel does not claim that the trip will be unbiased.

“The idea that college students would come to college in order to advocate boycotts, and then advocate boycotts of things that could help you to learn more about the situation at hand or meet other people is patently absurd,” Goodman added.

In addition to opposing the trip due to its funding sources, SJP wrote in the petition that they are calling for a boycott of the trip because they believed the trip contributes to the “normalization of the occupation of Palestine, and its ultimate goal of silencing calls for Palestinian freedom.”

SJP representatives Dylan Kupsh and Ivana Cruz said in an interview that they felt the need to circulate this petition because they believed “outside lobbyists” should not be influencing campus politics.

“I hope people understand the real gravity at stake at UCSB and how much people are lobbying,” Kupsh said. “I would be outraged as a student to know that an outside person is influencing student politics more than students themselves or student orgs.”

Ah, the brave and courageous freedom fighters of SJP, the group who chanted “long live the intifada” in the Arbor. Their input on campus is desperately needed to combat the evil forces on campus…

The intifada lives on and burns brighter than ever. Resistance prevails and students are catching onto the shady attempts to lobby our student body.

“attempts to lobby our student body” by whom?

The manipulative and malicious Jews, apparently. The SJP freedom fighters know that it’s not enough to glorify the violent killings of innocent civilians — they are desperate and are attempting to portray students as puppets of the Jews. Disgusting.

Isn’t it amazing how countries like Iran, Saudi Arabia, the UAE, Syria and so on get virtually no attention from student activists, despite horrific human rights violations that go far beyond anything Israel has ever done? Yes, Israel’s settlements policy is illegal and should be criticized, but groups like SJP will demonize Israel and BDS will form ties with Islamic extremists and far right European entities while condemning Israel for targeting terrorists who use Palestinian school children as human shields. Anyone claiming anti-Semitism isn’t an underlying motivation for these people is full of it; they can deny it all they… Read more »

I am not Jewish, in fact I am an atheist. When I get the yearly call from the University asking for a donation, I simply tell them that I will not support anti-Semites. They seemed stunned. I have contacted my three other roommates from UCSB, and they have stopped donations, too.

Good for you! Wow. It’s good to give back but perhaps consider giving to fight antisemitism? As soon as these fascists find something that shows facts to all kinds they try to shut it down.

In other news today, President Macron of France said today that “political Islam” has no place in France and announced that his government would fight “Islamic separatism.” And in Greece, the citizens had mass protests against the Islamic invaders in their country. So, who is the problem?

Why aren’t these people marching in solidarity with the Hong Kong protestors? Simple: their main goal is not pro-human rights but anti-America, and they only care about causes which make America, or its allies such as Israel, look bad.