Due to her dedicated effort, Mary-Claire King has shaped the way the science community views ovarian and breast cancer. 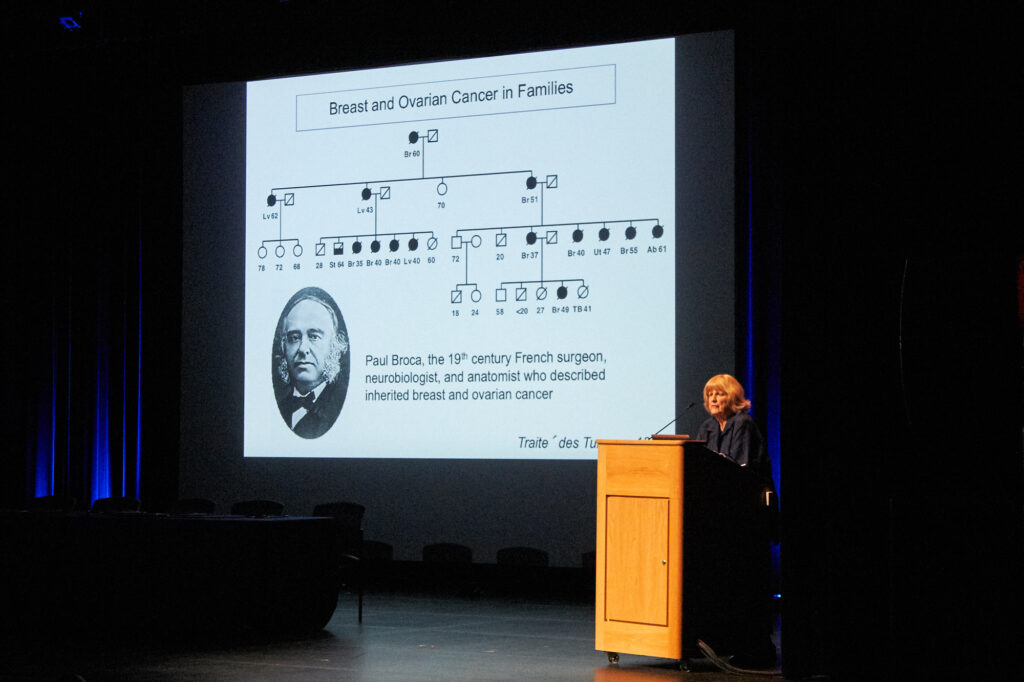 King is the American Cancer Society Professor of Genome Sciences and of Medical Genetics in the Department of Medicine at the University of Washington. Last Thursday night, King gave a lecture about her discovery at Campbell Hall, describing the process of finding the cancer susceptibility gene Breast Cancer-1 gene (BRCA1). The free public event was made possible by the Cancer Foundation of Santa Barbara and UCSB Arts & Lectures.

In her lecture, King described the procedure of how she mapped BCRA1. Carrying out research from 1974 to 1990 to find a genetic marker that coincided with inheritable breast cancer, King described this journey as a “15-year-long competition” among many scientists.

It was a difficult process to map out a gene, considering the Human Genome project — a 13-year international program that began in 1990 and aimed to identify and map out all the genes of human DNA — was not as comprehensive as it is now, and the lack of knowledge on the human genome caused difficulty in mapping genes.

King’s breakthrough proved that breast cancer is heritable. Her identification of the BRCA1 mutation as a large factor in breast cancer susceptibility pioneered the marked expansion on how heredity risks work in breast and ovarian cancers as well as the advance of new preventive and therapeutic treatments.

King was the first person to discover the mutation of BRCA1 gene. Since gene mutation is linked to the removal of DNA base pairs, the translation of RNA to DNA and to production of the BRCA1 protein is disrupted.

Furthermore, the mutation could cause the loss of enzymes, which administers the breakdown of BRCA1 proteins. This loss of enzyme activity damages estrogen production, causing an imbalance of this hormone and thus increases risk of breast cancer. Additionally, the mutated cells are still able to persist, potentially turning into cancerous cells.

A notable study King conducted involved analyzing the risk of women developing cancer associated with having BRCA1 and BRCA2 in the Ashkenazi Jewish population pool in Israel. Approximately 8,000 healthy adult men were asked to join a genetic study. King explained that her participants were all men because breast cancer in men is very rare and could be a gateway to identifying BRCA female carriers that are related to them.

Through this study, King encouraged all adult women to make “informed decisions” and understand that “modern technology is capable of intensive monitoring and developing preventive protocols to reduce your [cancer] risks.”

A remarkable treatment that King helped develop for heritable cancer (including breast and ovarian) is the use of PARP inhibitor therapy, a therapy that kills cancer cells by disrupting the DNA repair process of mutated BRCA1 gene. It is a natural incident for a non-mutated DNA to be damaged multiple times through a cell cycle since our body has two pathways to repair the damage: the primary homologous recombination pathway or the secondary AR-E1 pathway (less efficient, with the help of PARP1 protein).

In cancer cells, the gene mutation causes homologous repair to stop working, hence AR-E1 is the only pathway left to repair DNA. The PARP1 inhibitor will impede the AR-E1 pathway, eventually leading to the death of cancer cells, which grows at a substantial rate compared to normal cells. Patients that are given PARP1 inhibitor therapy saw a 70% slowed growth in cancer progression or cell deaths, according to King.

One of the reasons for the development of breast and ovarian cancer is the human ability to stay fertile longer compared to other mammal species, so one could greatly reduce their risks by removing ovarian and fallopian tubes, King stated.

She also described numerous non-genetic risks of developing breast/ovarian cancers among women, such as having an earlier first menstrual cycle and having a first child at an older age.

Towards the end of the lecture, King expressed concerns over the challenge of identifying women who are at risk. The reason is, she explained, roughly 50% of BRCA1 and BRCA2  carriers have no close family history. On top of that, there are many more genes contributing to the development of breast/ovarian cancer and BRCA1 and BRCA2 are not the only cause.

King suggested the best way to counter this problem is for “every woman [to] get [their] annual mammogram and breast MRI screening” or to ask their doctor to screen for mutations.

She also included that if BRCA1 and BRCA2 carriers are identified, there are several protective measures from breast/ovarian cancers that they could take, such as the option to have a risk-reducing mastectomy or breast removal.

King ended the presentation with common trends about inherited cancer, giving us insights on her work. The themes were:

And last but not least, Dr. King wanted her audience to know that breast and ovarian cancer patients do not have to suffer or die, because genetic testing allows many effective prevention and treatments.

As long as the patients reach out, there will be solutions, she said.