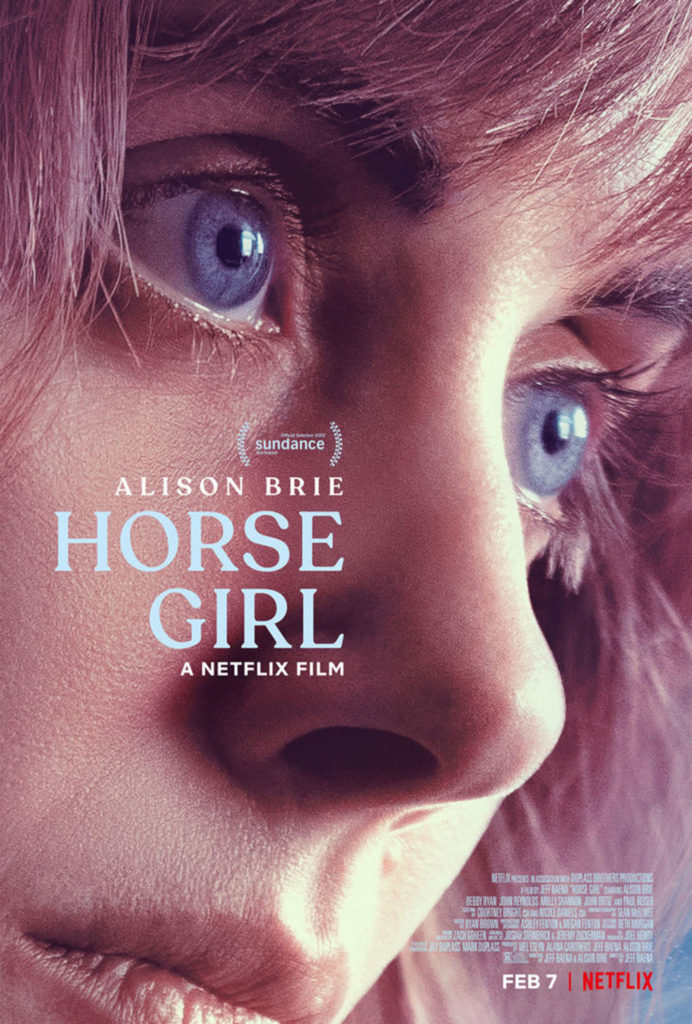 “Horse Girl,” a new Netflix 2020 drama, is something very different and unexpected. The two-hour-long drama keeps you actively engaged in the story as well as keeps you curious as to how the film will eventually end. Actress Alison Brie, known for her roles in productions like “BoJack Horseman” and “Community,” co-wrote the screenplay alongside director Jeff Baena and starred in the film as its lead character Sarah.

Sarah, a young woman whose lucid dreams become intensely vivid, struggles in differentiating these fantasies from reality. Brie does a remarkable job of surfacing many different emotions as well as evoking several emotions from the viewer with her portrayal of Sarah. You feel her discomfort, stress and unease in every scene as almost as if you were actually there. “Horse Girl” is undoubtedly a psychedelic trip of a movie, often leaving the viewer to question what is actually happening.

This film provides you with many plausible explanations for Sarah’s behavior including cloning,  alien abduction, borderline schizophrenia and a history of mental illness within her family. From the very beginning, you can easily tell that Sarah doesn’t blend well with others in her life — simply put, she just doesn’t fit in. For the most part, Sarah believes that she is a clone of her grandmother, constantly comparing their uncanny resemblances. Sarah, already being an awkward character from the jump, only then begins to suffer from events that resemble schizophrenic episodes. But it’s more than that; there’s a mysterious and unexplained layer roaming over the plot throughout the film. Only at the end does everything get pieced together, but you are still left without the satisfaction that anything truly got resolved.

The way in which this film’s sequence of events is carried out is very well done. Its depiction of time is one of constant bending and overlapping, forcing you to reevaluate your original thoughts and recall scenes that occurred in the film’s beginning. In short, every scene within “Horse Girl” is imperative to its central plot.

Courtesy of The Daily Caller

With that being said, there were some plot holes as well as certain depictions that seemed a bit excessive and exaggerated. Right as the film hits its climax, Sarah goes on a rather pointless venture dressed as a “pink ninja” — this scene seems as if it was created just to emphasize a trippy and kaleidoscopic aesthetic and ruins the initial effect of using all these distracting scenes in the first place. Then, there’s the mystery of her mother’s death and Sarah’s relationship with her stepfather. Both storylines are introduced, but neither are ever taken into more depth. The film implies that her past has a heavy and murky influence on both her personality and current ticks. Sadly, the viewer is only given a very minimal outlook on that part of Sarah’s life.

Another plot hole within the film would be that of the DNA test that Sarah takes about halfway through the film. The test was suggested to her by her coworker who had taken the test herself to discover more about her genetics. Sarah never receives the results for this test and instead just assumes that they are inconclusive. The DNA test, as well as a traumatic horse riding accident, are both ignored for the majority of the film. We are introduced to a childhood friend of Sarah’s that was immensely affected by the incident, but we are never truly given a reason to how this is relevant to the central plot — it seems as if it was put in just to fill time. Sarah’s obsession with horses and her discontinuation of riding them is also never fully addressed or explained. Her stepfather is decently wealthy, so even the sale of her horse doesn’t add up. These little intricacies distract from the main storyline and poorly develop Sarah’s overall character.

As for the film’s soundtrack, it was performed and composed by Josiah Steinbrick and Jeremy Zuckerman; this will be both composers’ first major accredited work in film. The music fits well with the theme of the film and highlights the anxiety-inducing and dramatic scenes very well. Its use of synth and tranquil sounds resembling wind chimes synchronizes nicely with the overall tone of the scenes. If you were simply to listen to the original soundtrack alone, it would be very similar to one that is played in the background at a spa.

Overall Rating: 8/10 — Aside from the abundant release of dramas premiering on Netflix recently, this film does take a different and interesting approach, compiled of many puzzling and somewhat cringy scenes. Nonetheless, I would suggest that people still see this film.