The Daily Nexus
Sports
Gauchos Take On Conference Leaders in Pivotal Week
February 6, 2020 at 6:08 am by Spencer Ault 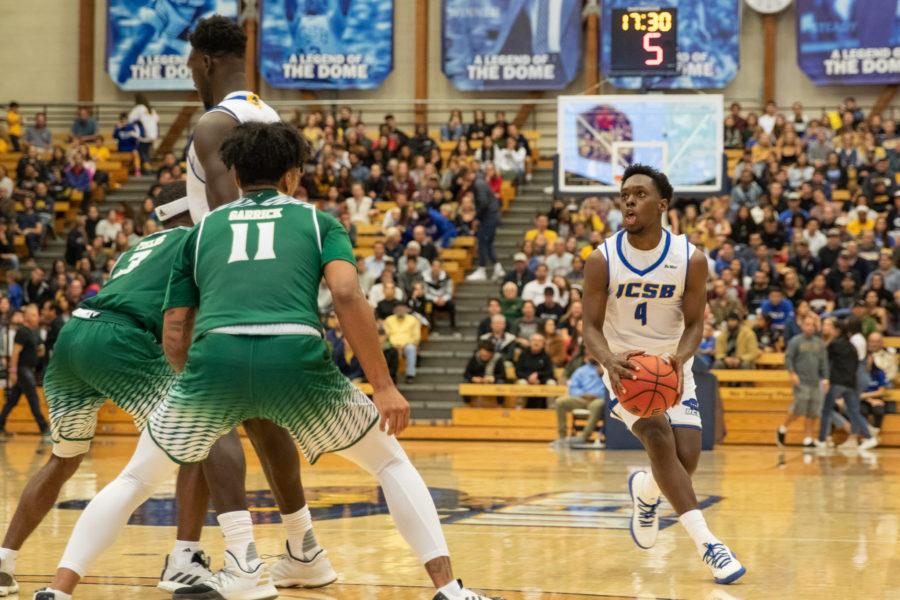 After a rough start to Big West play, the UC Santa Barbara men’s basketball team seems to have turned things around. The Gauchos are 2-1 in their last three games, including a 25-point blowout of Long Beach State last Saturday.

This week, however, they’ll put their turnaround to the test.

UCSB hosts the top two teams in the Big West this week, likely making this the toughest week of competition the Gauchos have faced this season. Hawai’i, second in the Big West with a 5-1 conference record and a 14-6 overall record, enters the Thunderdome on Thursday night while UC Irvine, top in the conference at 6-1 and 14-9, visits on Saturday.

Thursday’s game is a rematch of a mid-January 70-63 Hawai’i win in Honolulu. The Gauchos took a 35-33 lead into halftime but shot just 36% from the field in the second half and allowed Hawai’i to take command with an 11-2 run after halftime.

UCSB’s blowout win over LBSU last week had a similar background story: The Gauchos blew a first-half lead with an ice-cold second half the first time they played the Beach. A similar rebound against Hawai’i will be a tougher proposition than it was against Long Beach, but the precedent is there.

Senior guard Eddie Stansberry leads the Rainbow Warriors with 17 points per game and garnered Big West Player of the Week honors last week thanks to a 22-point performance in a win over CSUN. UCSB kept Stansberry quiet with just 6 points the first time the two teams met, a defensive performance the Gauchos would do well to repeat on Thursday.

“[Stansberry] is a great player,” Pasternack said. “I’m sure he’s going to come out firing on all cylinders, so we’re going to have to do a great job again of defending him, not just with one guy but with multiple defenders.”

While UCSB managed to keep Stansberry from doing significant damage back in January, the team instead died a death of a thousand cuts. No Rainbow Warrior scored more than 12 points, but all but one scored at least 5.

That balanced attack proved too much for the Gauchos to match, but the team could have stood a chance had it been able to shoot in the second half. If the LBSU game last week is any indication, the UCSB offense may be rounding into form just in time to avenge that second half.

Thursday’s game will be at 7 p.m. in the Thunderdome and broadcast on Big West TV. One attendee will be picked to get a chance to make a half-court shot to win a free car at halftime.

Whatever happens on Thursday, the Gauchos won’t have much time to rest and reload. Reigning Big West champion UC Irvine will visit on Saturday after playing UC Davis on Thursday night.

The Anteaters have continued their winning ways in the Big West this season. UCI has lost just one of seven conference games, although the one loss was an upset at the hands of middling LBSU.

Irvine had won 16 Big West games in a row before the loss to LBSU, a streak dating back to Jan. 16, 2019. The Beach held the Anteaters to a 33.8% performance from the field and kept UCI in the rearview mirror with wave after wave of scoring runs.

The loss to LBSU was the first game in a mini swoon for the Anteaters, who beat Cal Poly by just 7 points three days later at home. Those two games aside, Irvine has won every Big West game by double digits.

UCI’s most recent conquest was a 91-61 drubbing of Cal State Fullerton last Saturday, although the team will play UC Davis on Thursday before traveling to UCSB.

The Anteaters don’t have one dominant scorer on offense, but they have several capable bucket-getters. Redshirt sophomore forward Collin Welp leads the team with 13.9 points per game and is second on UCI with 6.6 rebounds per game, despite starting only two games this season.

Senior point guard Eyassu Worku plays the most minutes of any Anteater — 28.4 per game — and is second on the team with 12.1 points per game. Worku directs the UCI offense with a team-leading 4 assists per game and has also knocked down 42% of his 3-pointers on just under 4 attempts per game.

Saturday, then, will be a Newtonian clash of force and object. The Gauchos shoot a conference-best 46.8% from the field — which limits rebounding opportunities for opponents — but they’ll still have their hands full trying to keep the Anteaters off the boards.

Rebounding and victory have often gone hand in hand for UCSB this season, and that formula likely won’t change on Saturday. First, the Gauchos will have to find a way to replicate LBSU’s success and keep UCI’s shooting percentages low and then they’ll have to clean up on the boards in order to be competitive and take down the kings.

Saturday’s game will be broadcast by ESPNU and will take place at 7 p.m. in the Thunderdome.